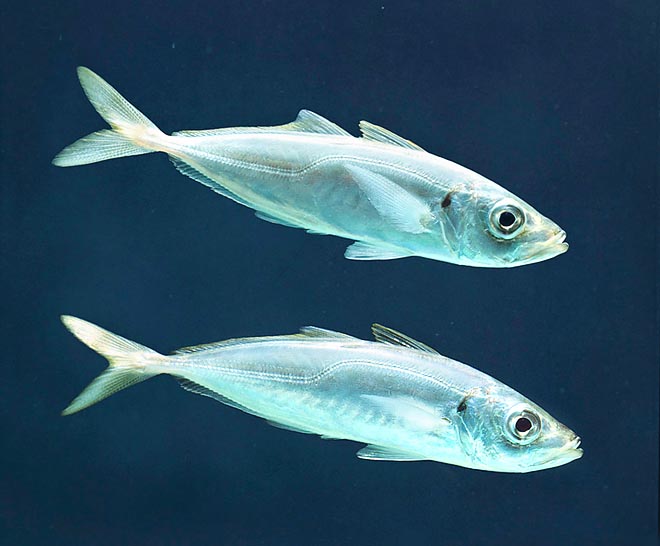 Trachurus trachurus is a pelagic gregarious fish. It reaches 70 cm and 1000 m of depth © Giuseppe Mazza

The Atlantic horse mackerel olso known as Scad (Trachurus trachurus Linnaeus, 1758) belongs to the class of Actinopterygii, the ray-finned fishes, to the order of Perciformes and to the family of Carangidae.

The name of the genus comes from the Greek “trachys” = rough and “ura” = tail.

That of the species reiterates the concept, because the lateral line is armoured by spiny small shields which increase the size when approaching the tail, and among all, the Trachurus is the most spiny.

And seen that the tips are bent towards the tail, the one seizing it by that part gets a decidedly a rough experience.

The Trachurus trachurus is present in the whole Mediterranean, including the Black Sea, where, however, its number is poor, like on the eastern coasts from Libya to Greece. Once off Gibraltar Strait, we find it, northwards, with a good density of population, up to the UK and, in minor number, in the northern countries, up to Iceland. South from Gibraltar, it goes coasting Africa, after having colonized the Azores, Canary and Cape Verde islands, and then goes northward for a while into the Indian Ocean.

It is a not at all attached fish to its territory and is never motionless. It sails offshore in often crowded schools which move rapidly, depending on the seasons and the events, towards where food is available. Usually, it swims at 100-200 m of depth, but, especially in winter, when it is cold in surface, it goes down, without any problem, to 500-1000 m. Only in summer it comes up to the surface getting close to the coasts, with a preference for the sandy ones.

It can reach the 70 cm of length, but usually the specimens fished with the trawl nets reach the 30 cm at most and those seized at great depths with the longlines the 50 cm. 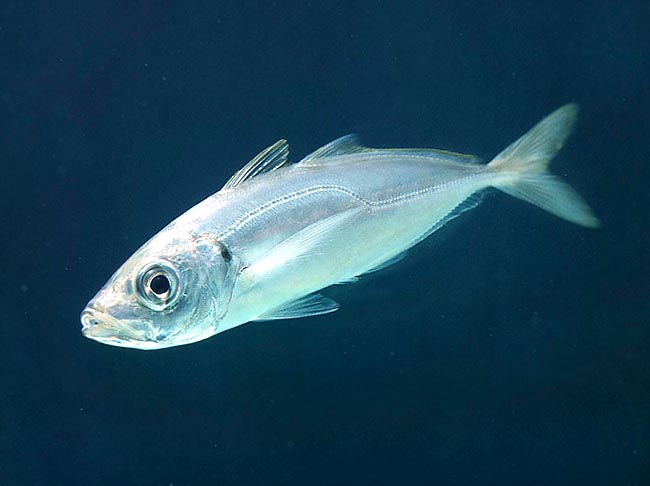 Besides the lateral line with 69-79 piercing small shields, of which we have treated in the etymology, there is a second lateral line upward, close to the two dorsal fins. It extends from the first one to two thirds of the second, and, sometimes, almost up to the tail.

The first dorsal is preceded by a spine sunken into the back looking forward, as in all the Trachurus and in other Carangidae like, for instance, the Pompano (Trachinotus ovatus ).

The mouth, ample and oblique, shows only one row of teeth on the jaw and the mandible, slightly longer, but there is other of them, tiny, on the vomer, the palatines and even on the tongue. The eye, relatively big, is protected by two adipose eyelids, placed on the sides. The colour is greenish grey on the back, with silvery sides, at times with violaceous hues which disappear immediately after the demise. The operculum has a black dot.

The Atlantic horse mackerel is a fast and gregarious species nourishing mainly of plankton: wandering crustaceans and larval or juvenile stages of fishes. When the size allows so, it attacks also small cephalopods and the schools of sardines or anchovies. It is a permanent gonochoristic species, fertile starting from the 21-30 cm. It reproduces all over the year, depending on the regions. In Mediterranean this happens especially in summer. A female can spawn 140.000 pelagic eggs, from which generate 5 mm larvae.

Even if it excessively fished, it is not greatly endangered, due to its diffusion and the possible doubling of the population in 1,4-4,4 years. The vulnerability index of this species is of 59 over 100.