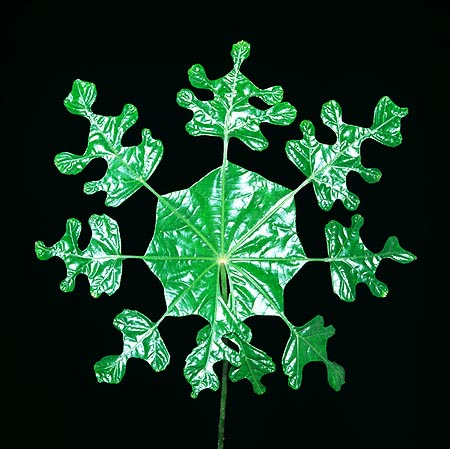 The much decorative leaf looks like a snow-crystal © Giuseppe Mazza

The genus was honoured by the author, Roberto de Visiani (1800-1878) to the family Treves of the Bonfili of Padua, patrons of the 19th century botany, the name of the species comes from the Latin “palmatus” = palmate, with obvious reference.

Shrub or small evergreen tree, with a globose crown, 5-8 m tall and with tomentose and thorny stem and branches, it has, on a long petiole, often thorny, palmate, coriaceous, glossy dark green leaves, with a diameter of 30-60 cm and even more, with nervations in relief, the central part of the lamina is entire and from the same come out 5 to 11 ovate-oblong lobes with a sharp apex and margins indented, or irregularly and variously pinnate; the shape of the leaf varies remarkably between the specimen even on the same plant.

The inflorescences are terminal, panicle, with ramifications carrying one terminal umbrella and two, almost opposite, in the median part, of 5-10 cm of diameter, with some tens of perfumed, yellowish-white, hermaphrodite, flowers with a diameter of about 12-18 mm. Ovoid fruits, with a diameter of about 2 cm, containing 7-12 seeds. It reproduces by seed, cutting and air layering.

Very decorative plant due to the uncommon shape of its leaves, which recalls the snow crystals, from which come some of the common names, can be cultivated in open air in the tropical, subtropical and warm temperate zones, where it can bear, for short period, temperatures reaching the -4°C, even if with loss of the aerial part, but vegetating again at the base; it prefers a slightly shaded position, even if it adapts both to the full sun and the half shade, and sheltered from the wind.

It is highly decorative when in pot, to be utilized in wide spaces, and is to be cultivated in porous, draining, slightly acidic, substrata, kept humid during the vegetative time, and allowing the same to partly dry up between the watering in winter.

The young leaves and the unripe inflorescences are consumed, as boiled, by some local populations.