The species is native to Borneo (Sabah) where it grows as epiphyte on the trees of the humid forests at hilly altitudes.

The name of the genus is the combination of the Greek substantives “θρίξ” (thrix) = hair and “γλῶττα” (glotta) = tongue, with reference to the down preent on the labellum; the species is honoured to Virginia (U.S.A.) nurseryman Dwayne Lowder.

The Trichoglottis lowderiana Choltco (2009) is a monopodial epiphytic orchid with cylindrical erect or drooping stems, from which depart robust and flesh aerial roots, and alternate leaves, distichous, coriaceous, oblong with bilobed apex, 5-8 cm long and 2-2,5 cm broad. Short inflorescences from more nodes at the same time bearing 1-2 flowers of 2,5-3 cm of diameter, with yellow sepals and petals and white tomentose labellum with yellow sport at the base, pleasantly scented.

It reproduces by seed, in vitro, and at amateur level by division of the stem in two portions provided of a sufficient number of leaves and roots, the upper part is to be treated as an adult plant, the lower one, placed in an ambient with high temperature and humidity, will produce one or more plants from dormant buds that can be taken off as soon as they have formed their own rooting apparatus. 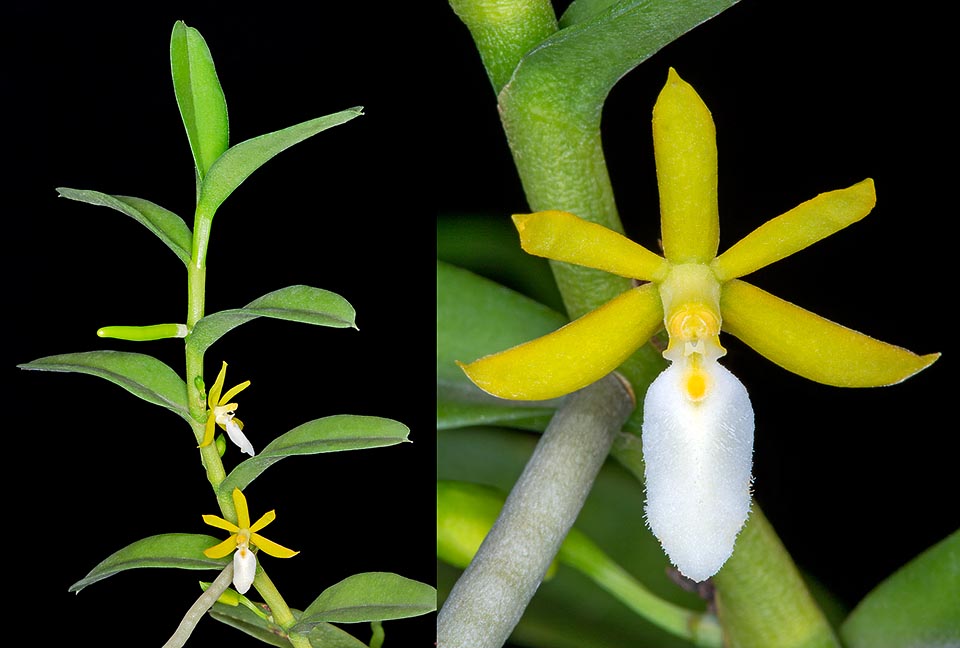 Rare in cultivation, the Trichoglottis lowderiana is an epiphyte of the humid hilly forests of Borneo. Erect or drooping cylindrical stems, with 5-8 cm alternate leaves and robust aerial fleshy roots. The very short inflorescences come out at the same time from more nodes with 1-2 scented flowers of 2,5-3 cm of diameter © Giuseppe Mazza

Species rare in cultivation, requires a very luminous exposition, even direct sun, but in the central hours of the day, medium-high temperatures in summer, 24-35 °C, slightly cooler in winter, with minimum night lowest not under the 18 °C, high humidity, 70-85%, and air constantly in movement. Regular and abundant waterings preferably in the first half of the day, in order to allow the plant to dry up before evening, the stagnation of water at the axil of the leaves can cause dangerous rottenness, slightly more spaced in winter to allow the roots to dry up between the waterings, that are to be done, as well as the nebulizations, with rain water, demineralized of by reverse osmosis at ambient temperature. Fertilizations every two weeks, during the growth period, utilizing a balanced hydrosoluble product, with microelements, at ¼ the dosage shown on the package. It is usually mounted on trunks, bark, rafts of cork or of arborescent ferns, to allow the roots to grow freely and to dry up quickly after each watering and nebulization.