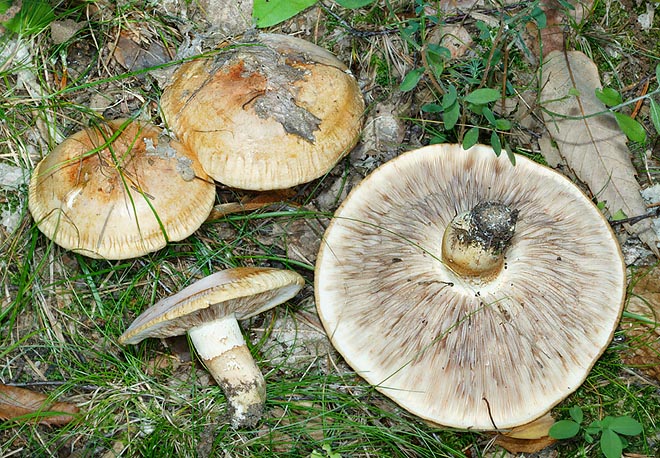 Even if sought for in some areas, Tricholoma acerbum is a mediocre edible © Giuseppe Mazza

The etymology of the name comes from the Latin “acerbus” = sour, astringent, immature. The Tricholoma acerbum is a fungus popularly considered as a good edible. This is testified by the numerous dialectal names. Just to cite some of them, in Italy it is called durello, castagnaccio, castagnolo, amaretto, fungo della carne, orellone o gozzi. In France, tricholome acerbe; in Spain: in Catalan, timoner, in Euskera, ziza mingots; in UK, bitter knight.

To this Section are ascribed small and medium sized species, having dry, smooth, felty, imbricate, scaly or even woolly cap; with a colour going from the blackish-brown up to the reddish brown, at times with ochrous hue. Immutable white gills, at times spotted of brown-reddish when old. White, hazel shaded of brown, stipe. White flesh, just pink cream under the surface.

Recognized by the edge, at first highly inrolled, then curved and always ribbed © Giuseppe Mazza

Description of the Subsection

The subsection Psammopoda has species with finely imbricate or felted, plushy, at times cracked cap; the colour varies from the straw yellow to the ochre with brown-pink shades; strongly inrolled, ribbed; white, yellowish stem; pruinose-powdery, at times spotted of brown.

Description of the Species

Cap: 8-12 (15) cm, initially hemispheric-globose, then convex and finally outstretched; edge initially strongly inrolled, almost touching the stem, then inrolled and ribbed. The cuticle is thick, almost totally detachable, smooth, tomentose and felted particularly at the edge, matt in dry weather, glossy and bright and rather greasy in wet weather. The colour is yellow-ochre, beige-yellowish, yellow-greenish, and cream-brownish at the centre in the ripe specimens.

Habitat: It grows in summer and in autumn under broad-leaved trees, especially chestnuts and oaks, abundant in the locations of growth.

Edibility: average edible, even if in some areas it is much sought for and appreciated, especially for its utilization under oil. 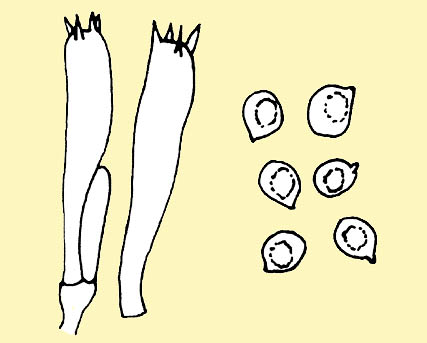 Remarks. It is a fairly diffused species in the temperate zones, in soils rich in carbonates, in broad-leaved trees woods.

It is a very common fungus at least in Italy, however it seems that in Germany, Austria and in Switzerland it is considered as an endangered species.

It is easy to recognize for the margin, initially strongly inrolled, then curved and always ribbed, for the yellowish white colour and the thick gills, pale cream or straw yellow, which stain of brown.

It is quite similar to the rare Tricholoma roseocerbum Riva, which, however, has on the cap some pink, pink-brown, hues and, after the literature, grows in woods of broad-leaved trees as well as in those of conifers, apart the colour of the cap, macroscopically there are no differences and also the microscopy is almost overlapping.