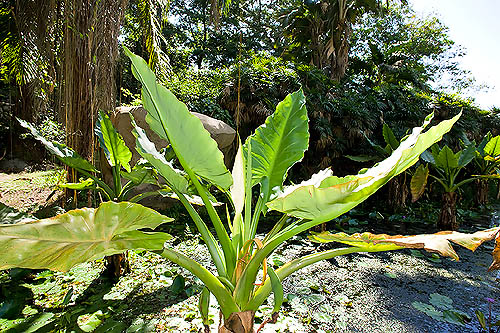 The Typhonodorum lindleyanum Schott (1857) is native to the Comoro Islands, Madagascar, Mauritius and Tanzania, where it grows along the water streams banks, the lakes shores, and in the swamps.

The name of the genus is of uncertain signification, as it has not been specified by the author, the most accredited version derives from the combination of the Greek words “typhon” = violent wind and “doron” = gift; the species is honoured to the English botanist John Lindley (1799-1865).

Evergreen aquatic herbaceous, rhizomatous, with a pseudo-stem, coming from the superimposition of the bases of the striated pink-white and dark purple dotted petioles, tall up to about 3 m and with a diameter of 10-30 cm; the glossy green leaves are sagittate, almost erect, with a sharp apex and undulated margins, long up to 120 cm and up to 80 cm broad, on 0,5-1 m long petioles.

Inflorescence formed by an up to 80 cm long spathe, tubular at the base till about one third of its length, externally greenish-yellow and internally pink white, and for the remaining part cream-yellow, and by an up to about 50 cm long spadix, ending in a 20 cm long, sterile appendix; the flowers are unisexual protogynous (the stigma, the female part, is receptive before the stamens ripe, thus avoiding self-fecundation), with the male flowers distributed in the upper part and the female in the lower one, in correspondence with the tubular zone of the spathe, separated by a sterile zone; the pollination is helped by insects attracted by the smell of rotten flesh, emanated by the spadix.

The fruits are globose berries of about 4 cm of diameter and yellow when ripe, containing only one, compressed and roundish, seed, of about 3 cm; the growth of the seed, since its fecundation, does not have any time of stasis, as it germinates also on the plant itself, till when, already equipped with leaves, it falls in the water from the infructescence, which, in the mean time, has bent towards the bottom.

It reproduces by seed, which is to be planted as soon as ripe, covered by a few centimetres of water, plantulae and division of the rhizome.

Impressing plant of a great landscape effect, suitable for wide water gardens in the tropical and humid subtropical climate zones, to be cultivated in full sun on soils rich of organic substance with the rhizomes covered by a layer of stagnating water.

The pulp of the fruits, like all the rest of the plant, contains irritating substances, in particular calcium oxalate, which can cause allergic reactions and is to be handled with care; the roasted seeds, after several boiling, provided the water is renewed by each time, are edible, and are locally consumed; also the rhizomes, with the same proceeding of repeated boiling, have been consumed, in the past, during famine periods.