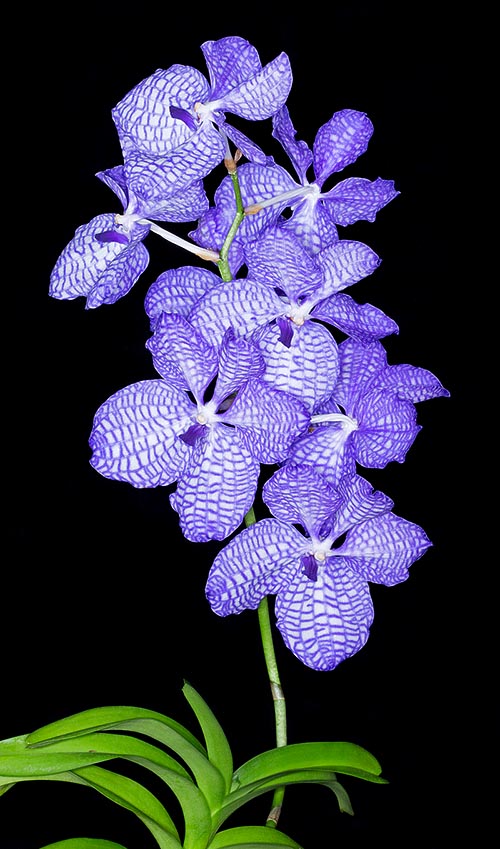 Native to south-east Asia, Vanda coerulea is an epiphyte, with even 1 m long vertical stems, growing in the monsoon areas between 800 and 1700 m of altitude © G. Mazza

The species is native to Arunachal Pradesh, Assam, Bangladesh, Bhutan, China (Yunnan), Darjeeling, Manipur, Meghalaya, Myanmar, Nagaland, Northern Thailand and Sikkim where it grows on the trees of the open forests or at the margins of water streams, between 800 and 1700 m of altitude, in areas characterized by monsoon climate.

The name of the genus is the Sanskrit one of the Vanda tessellata; the specific name is the Latin adjective “coeruleus, a, aum” = azure, light blue, with obvious reference.

The Vanda coerulea Griff. ex Lindl. (1847) is a monopodial epiphytic species with erect stem, of 0,8-1,5 cm of diameter and long up to more than 1 m in the old specimens, covered by the imbricate foliar bases, from where depart robust and fleshy aerial roots. The leaves are alternate, distichous, nastriform with V-shaped section and irregularly bilobed apex, 7-24 cm long and 1,5-2,6 cm broad, arranged almost horizontally, of pale green colour, coriaceous.

Axillar racemose inflorescences, on a 15-20 cm long peduncle, erect of slightly arcuate, 20-40 cm long, bearing 5-15 flowers of 8-10 cm of diameter with sepals and petals of more or less intense violet light blue colour, tessellated, and intense purple blue labellum; long-lasting blooming in autumn-winter, up to more than one month. Sepals and petals unguiculate (with long narrow base similar to a stem) with obovate margin with rounded apex and slightly waved edge.Trilobed labellum with erect lateral lobes, oblong median lobe with truncated apex run by two-three longitudinal crests and a sort of conical spur with obtuse apex at the base. Dorsal sepal 3,5-4,5 cm long and 2-2,5 cm broad, lateral sepals 4-5,5 cm long and 2,6-3,5 cm broad, petals 3,5-5 cm long and 2-3 cm broad, with labellum 1,5-2,2 cm long and 0,6-0,8 cm broad and column about 5 mm long and 2 mm broad.

It reproduces by seed, in vitro, and micropropagation. At amateurish level, it can reproduce by division of the stem in two portions each provided of leaves and roots, the upper part will be treated as adult plant, the lower will produce from the dormant buds one or more plants that may be removed as soon as they have formed their own rooting apparatus.

One of the best known and cultivated Vanda thanks to the beauty of its unusually coloured flowers, that has transferred widely to the numerous hybrids, interspecific and intergeneric, that has originated, subject in the past to an indiscriminate collection, due to the continous collectors’ request, that has led it almost to the extinction in nature. It requires high luminosity, but not direct sun, intermediate temperatures with high daily thermal excursion, 6-8 °C, and lowest winter night values not under the 10 °C, high humidity, 80-85%, in summer-autumn, lower, 50-60%, in winter-spring, and constant ventilation. Frequent and abundant waterings from late spring to autumn, up to twice a day for the bare root plants in presence of high temperatures, spaced in winter in order to allow a cool and dry resting period as in nature, utilizing rain water, demineralized or by reverse osmosis at ambient temperature. Fertilizations from spring to autumn every two weeks utilizing a hydrosoluble balanced product, with microelements, at half the dosage suggested on the package. It is usually cultivated in holed pots or in suspended baskets in order to allow the roots to freely lengthen and to quickly dry after the waterings and nebulizations, at bare root, more fequently, or with a compost that can be formed by medium-large sliced bark and charcoal fragments.

The repottings are to be done, when strictly necessary, at the vegetative restart, trying to damage the least possible the roots that are to be previously wetted to render them more flexible, for the bare root plants it is sufficient to insert the basket into a bigger one.

The juice extracted from the leaves is locally utilized in the traditional medicine against diarrhea and dysentery, whilst that gotten from the flowers as eyewash for the glaucoma and the cataract. The long lasting inflorescences of the species, and even more of its hybrids, are utilized in the floral compositions.

The species is reported in appendix II of CITES (species whose trade is internationally ruled).