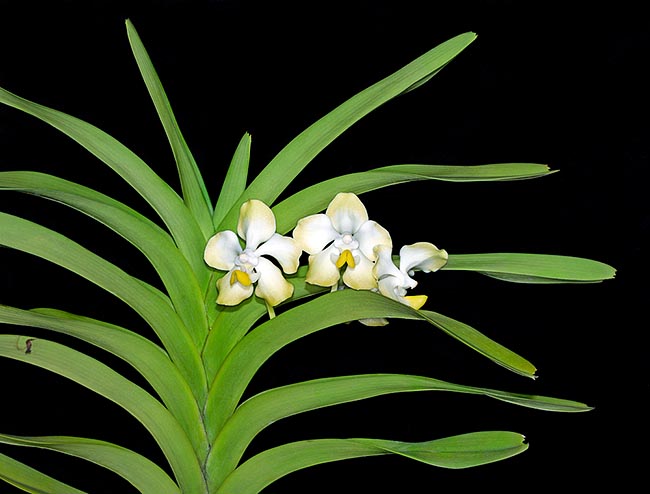 The species is native to Borneo and the Lesser Sunda Islands where it lives in the humid forests on the most exposed branches of the trees, in way to take advantage from the maximum luminosity, mainly along the water streams banks, at low altitudes.

The name of the genus is that in Sanskrit of the Vanda tessellata; the species was honoured by H.G. Reichenbach to the English colonel Deare, collector of orchids, who had picked it up in the Sunda Islands.

The Vanda dearei Rchb.f. (1886) is a monopodial epiphytic species with erect stem, that can exceed the metre of height, hidden by the imbricate foliar bases.

Axillary racemose inflorescences on short peduncle carrying 3-6 fleshy flowers, up to about 8 cm of diametre, cream white shaded of pale yellow with golden yellow labellum. Sepals and petals similar shortly unguiculate (with the narrow base similar to a stem), about 4 cm long and 3 cm broad, trilobed labellum about 4 cm long and 4,5 cm broad.

The flowers are long lasting, about 2 weeks, and emit an intense sweet scent. It reproduces by seed, in vitro, and micropropagation. 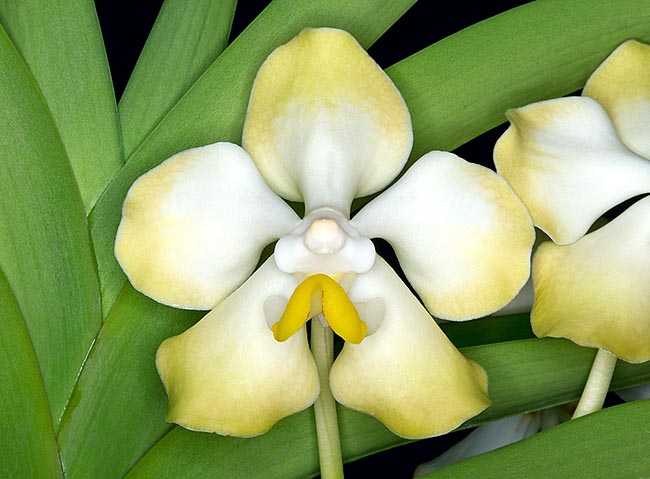 The inflorescences have 3-6 even 8 cm broad much perfumed flowers. Little cultivated but with numerous hybrids © Giuseppe Mazza

Increasingly rare species in nature due to the excessive anthropization and the unlawful harvesting, is one of the most ornamental of the genus thanks to its big fleshy flowers, perfumed, of almost circular shape, and produced more times in a year, in spite of this is poorly present in the collections of the lovers, contrary to its numerous hybrids with the yellow flowers it has originated.

It requires high luminosity, also some hours of direct sunlight in the morning, high daily temperatures in all seasons, 25-34 °C, with minimum night tempe- ratures in winter not under the 18 °C, high humidity, 70-85%, along with a constant ventilation.

The waterings must be frequent and abundant, even daily in particular for the mounted plants in presence of high temperatures, more spaced in winter with lower temperatures, avoiding stagnations, using rainwater, deminera- lized or by reverse osmosis. Beweekly fertilizations in summer, monthly in winter, utilizing a preferably balanced product, with microelements, at half the dosage suggested by the producer. It can be mounted on branches, bark, rafts of cork or of arborescent ferns or cultivated in well drained pots or preferably in baskets, in way to allow the roots to freely elongate and to quickly dry up after the waterings and the nebulizations, using an aerated compost that may be formed by medium-large sliced bark fragments and charcoal. The roots do not love to be disturbed, therefore the repottings are to be done when strictly necessary, by the vegetative restart.