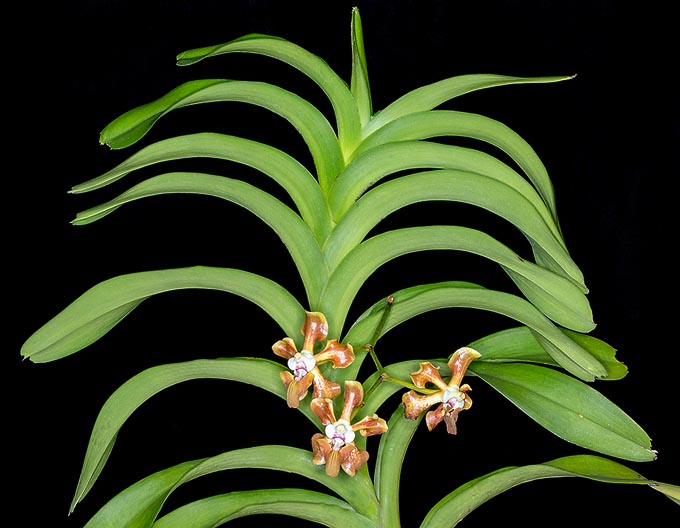 The species is native to Bismarck Archipelago, Borneo, Java, New Guinea, Peninsular Malaysia and Sumatra where it lives on the trees of the humid forests along the banks of water streams, up to about 1600 m of altitude.

The name of the genus is the Sanskrit one of the Vanda tessellata; the specific name is the Latin adjective “helvolus, a, um” = brownish yellow, with reference to the colour of the flowers.

The Vanda helvola Blume (1849) is a monopodial epiphytic species with erect or semi-drooping stem, up to more than 1 m long, wholly hidden by the imbricate foliar bases, from which depart robust and fleshy aerial roots.

It reproduces by seed, in vitro, and micropropagation. At amateur level it can reproduce dividing the stem in two portions provided each one of a sufficient number of leaves and roots, the upper part is to be treated as an adult plant, the lower one, placed in an ambient with high temperature and humidity, will produce from the dormant buds one or more plants that can be taken off as soon as they have formed their own rooting apparatus. 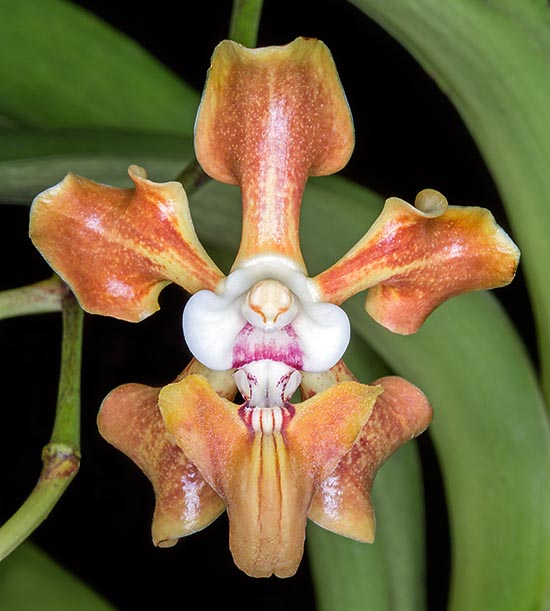 One of the most diffused in the wild Vanda, but quite rare in cultivation, requires high luminosity, also filtered sun light, medium-high temperatures in summer, 25-35 °C, slightly cooler in winter, with lowest night values not under the 16 °C, high humidity, 70-85%, together with a constant ventilation. Abundant and frequent waterings, even daily, in particular for the plants mounted and with bare root, in presence of high temperatures, more reduced in winter, with cooler temperatures, so to allow the roots to dry up completely between the waterings, utilizing rain water, demineralized or by reverse osmosis at ambient temperature.

Fertilizations every two weeks from spring to early autumn, monthly in winter, utilizing a preferably balanced hydrosoluble product, with microelements, at half the dosage suggested on the package.

It can be mounted on trunks, bark or rafts of cork or of arborescent ferns, or in pots with excellent drainage, to avoid dangerous water stagnations, or preferably in suspended baskets, in way to allow the roots to extend freely and to dry up quickly after the waterings and the nebulizations.

They can be positioned wit bare root, without any substratum, as well as with particularly draining and aerated compost that can be formed by medium/big sliced bark fragments and charcoal with possible addition of inerts.

The repottings are to be done when strictly necessary, at the vegetative restart, trying to damage the least possible the roots that are to be previously wetted in order to render them more flexible.