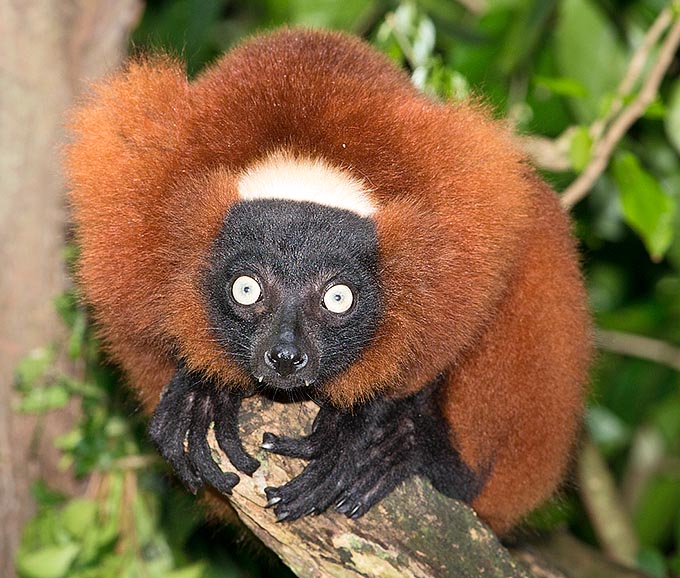 Varecia rubra, highly endangered, is one of the most beautiful and big members of lemurids family © Giuseppe Mazza

The name of the genus Varecia should come from that with which the local populations call these lemurs, that is “varijatsy”, whilst the specific name comes from the Latin “rubra” = red, to indicate the tawny colouration of most of its fur.

The Red ruffed lemur lives in the primary and secondary deciduous tropical forests of the Masoala Peninsula, located on the north-eastern coast of Madagascar and on whose territory extends the homonymous National Park, including vast areas of primary, pluvial and coastal, forest besides a diversified and plentiful fauna. Along with the Red ruffed lemur, in fact, in the peninsula live other primates, such as the famous Aye-aye (Daubentonia madagascariensis Gmelin, 1788) and the Brown lemur (Eulemur fulvus É. Geoffroy, 1796).

It is also present in the region north to Antongil Bay, always in the north-eastern part of the island, bay on which level, historically, did overlap the ranges of the two lemurs (Varecia rubra and Varecia variegata). Presently, it seems that the river Antainambalana divides the two species and that the westernmost limit in the distribution of the Red ruffed lemur is near to the confluence of the Antainambalana and the Sahantaha. 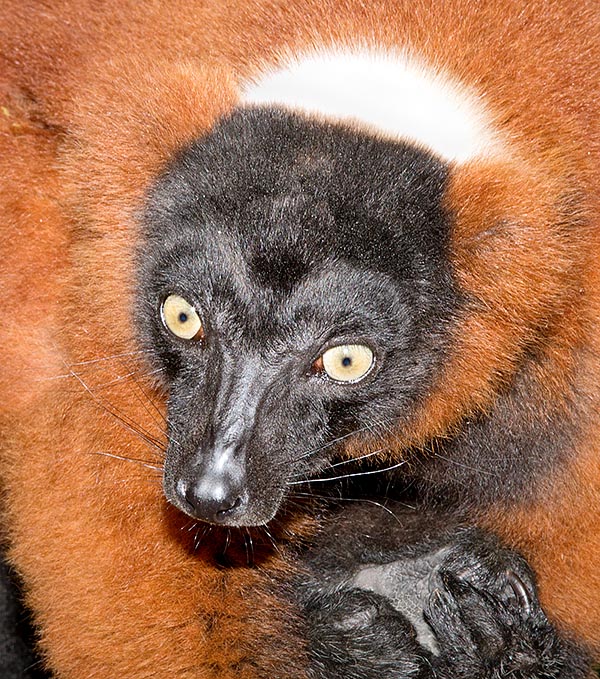 Like Varecia variegata, it eats fruits, but also nectar and pollen, thanks to its long muzzle © G. Mazza

Its range extends in altitude from the sea level up to about 1200 m.

The Red ruffed lemur has the appearance of a large lemur, with tapered body and long legs. Has pointed snout, similar to that of a fox, and small ears bent backwards, often hidden by the fur.

Face, hands, feet, abdomen and tail are black, whilst the rest of the body is characterized by a thick and soft fur of rusty red colour, hence the name, but a small area of white hair behind the head.

White spots can be present also on the legs or around the mouth. Along with the black-and-white ruffed lemur is by sure one of the most beautiful and largest members of the family Lemuridae. It is, as an average, 60 cm long excluding the tail, that may reach even the 50 cm; weighs 3 to 4 kg. The females are larger than the males.

Just like other strepsirrhine monkeys its has a dental comb formed by six lower incisors and a second finger specialized for cleaning the hair (grooming).

The Red ruffed lemur is an arboricolous primate: it occupies usually the upper canopy level of the pluvial forests where it lives; furthermore, it shows diurnal habits.

For what the feeding is concerned, it is mainly frugivorous: it eats mostly fruits, nectar and pollen, but in the periods when the food is scarce, as is the case of the dry season, it does not disdain seeds and leaves.

The love of the ruffed lemurs, black-and-white included, for the pollen, renders them exceptional as pollinators. They have an insectivores toothing, slightly modified to adapt to their frugivorous habits: the dental comb is excellent for peeling the fruits. 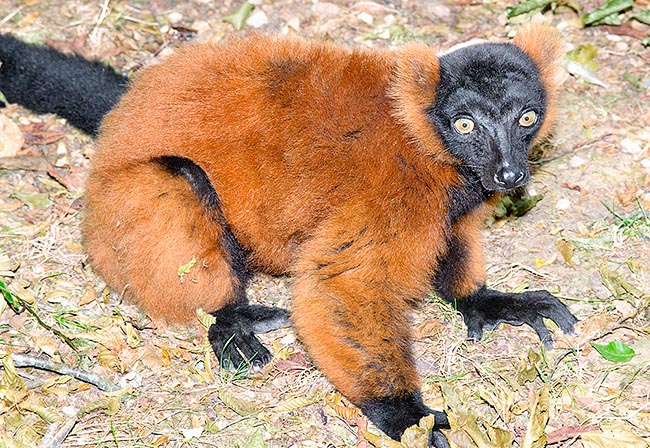 Usually occupies the upper canopy level of the pluvial forests of some Madagascar zones, but also goes down to soil looking for seeds and buds, showing, unlike other lemurs, diurnal habits © Giuseppe Mazza

The social system of Varecia rubra varies depending on the areas of forest where it is located: in some areas it tends to form fairly numerous groups, from 18 to 32 individuals, in other instances it lives in groups not exceeding the 5 units. However, the size of the groups depends also from the seasonality and, therefore, from the availability of food: during the rain season the groups tend to be big, probably as a consequence of the abundance of food, contrary to the dry season, where the scarcity of food leads the group to fragment in smaller ones.

As means of communication they mainly utilize vocalizations, evolved in a complex system where to each sound corresponds a precise message: while eating the individuals vocalize to indicate from time to time their own position and to keep together the various subgroups that form progressively while foraging; an alarm call is on the contrary used, to inform the members of a group of the approaching of a predator; another cry, yet, has the function of preventing other groups that an area of the forest is already occupied. In any case, the Red ruffed lemurs communicate also through the odours: they are equipped with glands located in the back part of their body that they use to secrete an odorous substance capable to identify the belonging to a group rather than to another.

Varecia rubra is polygamous: the males keep an eye on the females in order to get any message showing their receptivity for coupling, after which they openly solicit them in order to persuade them to mate. 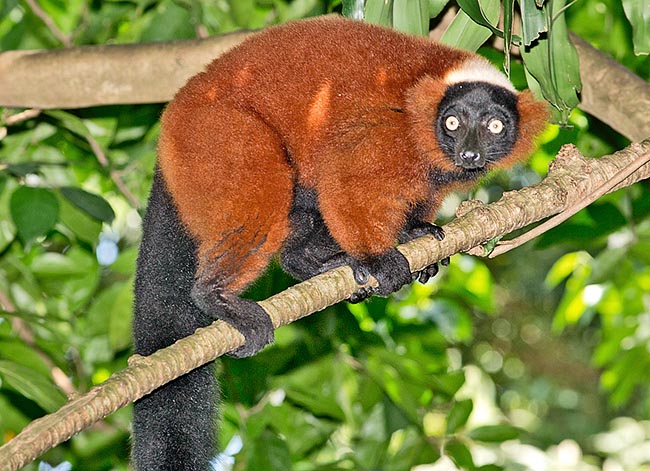 Varecia rubra lives in small 5-32 units groups, depending on sites and food availability linked to the seasons, that keep in touch with precise vocalizations and odorous substances typical of each group © Giuseppe Mazza

Usually, the solicitation fo the females by the males takes place after a stereotyped modality, consisting in a submissive approach by the male, accompanied by a cry and, at times, by the productions of odorous trails.

Finally, the prospective partners, for capitulating the female in oestrus, can get to sniff and leak their genitals, exibit in audacious vocalizations and rub their bodies against those of the females.

Quite often, the matings occur between members belonging to the same group, but are not missing intrusions of foreign males for coupling with the females in oestrus of another group.

The reproductive period goes from May to July, even if the females oestrus lasts only a couple of days, of which only one is that where the female is really fertile.

The pregnancy is short, lasting 90 to 100 dayds, and the delivery generates a substantial number of kids; the pregnancy for the mothers is demanding as they have also the duty to build the nests on the trees, at about 10-20 metres of height, using twigs, leaves and hair, for hosting the unborns.

And it is for this reason that the Red ruffed lemurs have adopted a strategy allowing the mothers a more contained parental involvement after the birth: the kids are left in the nests, in a sort of a “nursery” placed in the central “heart” of the home range of the group to which they do belong, in such a way that the mother can move in the forest without leaving the progeny in danger. 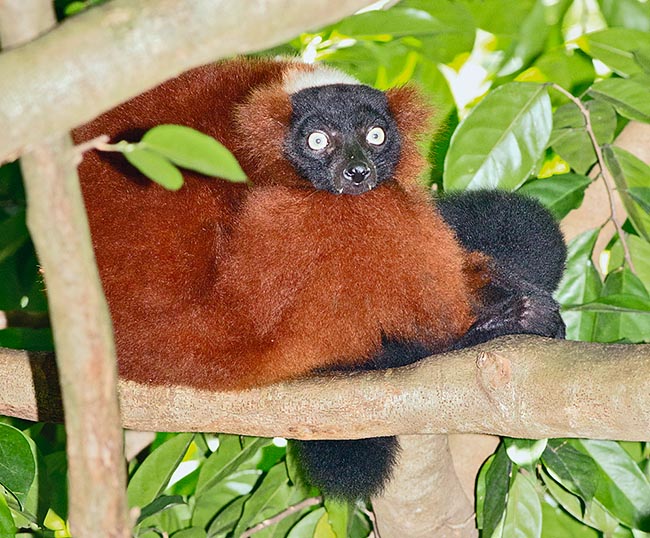 The females build the nest for the kids on the trees, then mutually watched by other females and the father © Giuseppe Mazza

In these nurseries, in fact, all the members of the group, father included, are busy in breeding the young, giving life to alloparental cares (behaviours oriented to the progeny done by individuals differing from their parents, often defined as “assistants”).

Upon their birth the kids are able to see and have their small body covered by hair, but begin to get a moving freedom only after about one month and a half of life. Usually the weaning occurs around the 4 months and the sexual maturity is reached by the females around the 2 years, by the males around the 3-4.

Unfortunately, not all the kids do survive; the falls from the trees and the predators attacks reveal fatal for about the 65% of them. Periods of about 2 years elapse between a pregnancy and the following one.

The Fossa (Cryptoprocta ferox) is the only natural predator of Varecia rubra, not taking man into account, ever increasing treat for our poor Red ruffed lemur. Being a big animal and living mainly in the primary forests, it is particularly sensitive to the habitat loss; furthermore, it is systematically hunted and can also be victim of the frequent cyclones occurring in the Masoala peninsula. Due to all above factors Varecia rubra is highly considered as in danger of extinction and is classified by the IUCN in the category CR – Critically Endangered). In nature, the Red ruffed lemur lives about 20 years, whilst in captivity it may reach even the 25 (with the exceptions represented by a very long-lived specimen who reached the respectable age of 33 years).