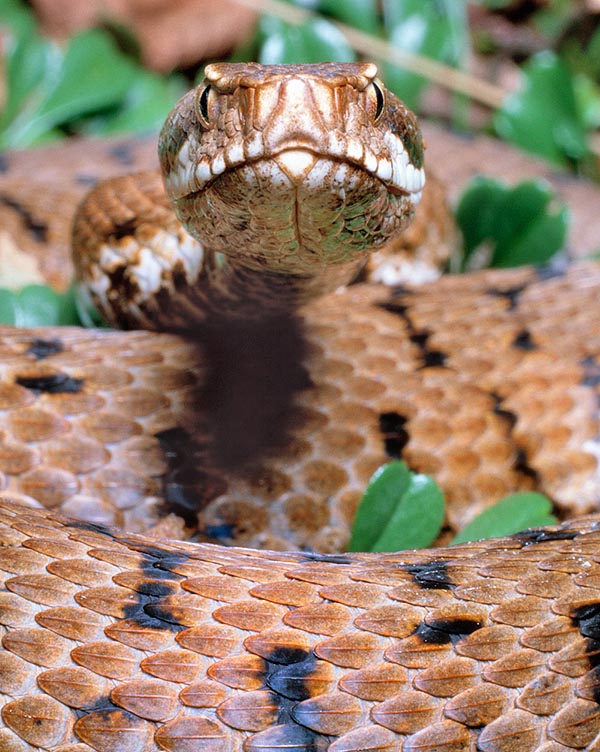 The Asp (Vipera aspis Linnaeus, 1758) is a snake belonging to the family of the Viperidae.

The generic name Vipera comes from the contraction of the term viviparous, from the Latin “vivus” (alive) and “parere, pario” (to deliver, to generate); hence to give birth to young already perfectly formed and efficient; the specific name aspis from the Latin female substantive “aspis, aspidis” that means venomous snake. Term that in turn comes from the Greek “aspís, aspídos”. A different interpretation refers to the term “aspís” meaning shield, referring to the anatomical conformation of the head.

The systematics of Vipera aspis is quite complex and the present subdivision in the various subspecies, as well as the apportionment in the areas where they are distributed, is still today matter of discussion among the researchers.

From the taxonomic point of view, some researcher have questioned the validity of the subspecies Vipera aspis atra, subspecies closely linked to the alpine mountain habitats. Genetic analyses have proved that this subspecies does not differ from the nominal form, with which is considered at the moment by many as in synonymy. Despite this reduction to subspecific rank, it is clear that the viper that colonizes the mountain habitats has a livery and a behaviour that differentiate it from that living in the habitats of the Swiss Jura and of the French sector of its range.

Briefly, Vipera aspis atra is not any more deemed valid as subspecies by some authors. However, the specimens belonging to the populations of this invalidated subspecies, are in any case considered as ecotypes of the nominal form, justifying the great variability of the livery, element that differentiates it from the nominal subspecies, as an adaptation intended to optimize its possibilities of survival in the unfavourable environments in which it lives.

Vipera aspis : Siberian-European-Mediterranean chorotype. It’s present in western Europe and precisely in France, in north-eastern Spain, in southern Germany (Black Forest), in south-western Switzerland in almost all the Italian peninsula, including the islands of Sicily, Elba and Montecristo. It was believed that Vipera aspis was extinct in Germany, nevertheless, its presence there has been proved also thanks to the personal observations of one of the authors (Meier). 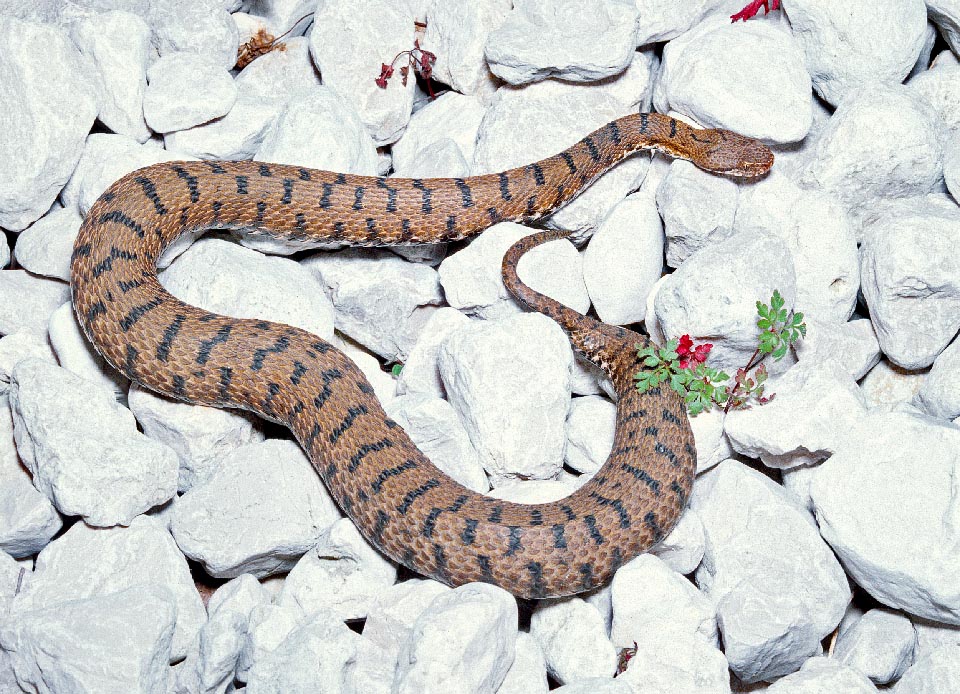 Vipera aspis aspis : is present in central and south-eastern France, in southern Germany and in western Switzerland.

Vipera aspis atra : its range goes from eastern France to central-southern Switzerland, up to northern Italy (Liguria, Piedmont and Aosta Valley). It essentially lives on the Alps.

Vipera aspis francisciredi : is present in central and northern Italy, in the southernmost part of Switzerland and in Slovenia.

Vipera aspis hugyi : is the only subspecies of Vipera aspis present exclusively on the Italian territory. It lives in southern Italy and precisely in Apulia, Basilicata, southern Campania, Calabria and Sicily. A small population of this subspecies is present on the Montecristo Island, but it is due to an introduction done by the man occurred in old times. Previously, this population was assigned to the subspecies Vipera aspis montecristi Mertens, 1956.

Vipera aspis zinnikeri : is the only subspecies, together with the nominal, absent in Italy, as it lives in North-East Spain and in the French Pyrenees. 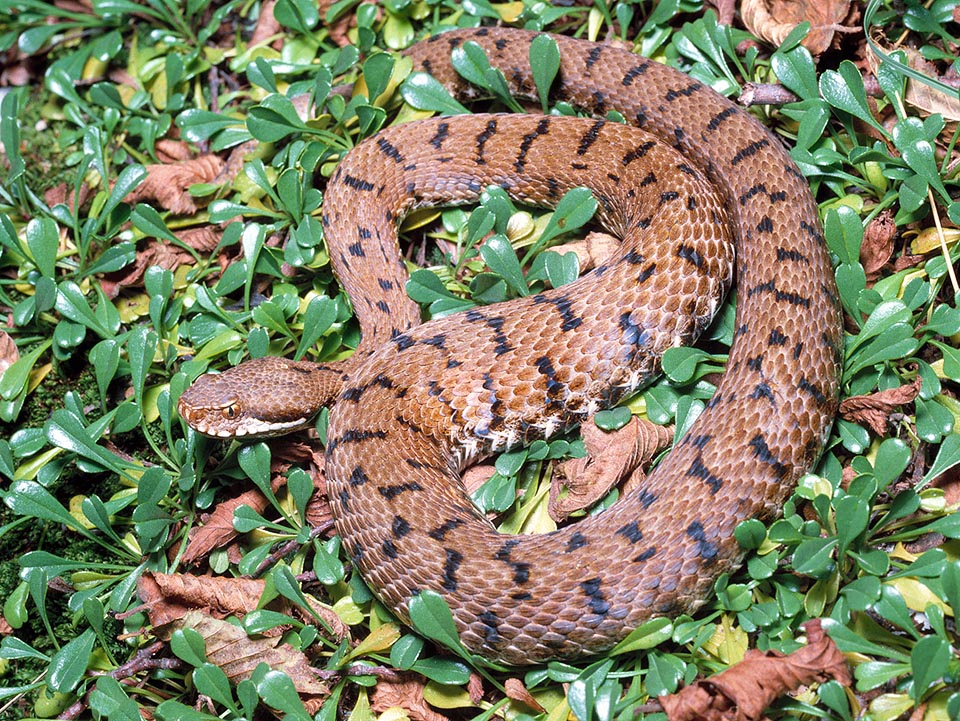 It can be 80 cm long. The males, with darker and more marked patterns, are usually slenderer than females © Giuseppe Mazza

The habitats vary depending on the subspecies and the structure of the territory, but basically is possible to affirm that the ideal habitat is formed by stony grounds, landslides, avalanche corridors, margins of woods, shrubby areas, mountain and sub-mountain pastures, dry stone walls. Unfortunately, many of these ecosystems are likely to be destroyed, thus jeopardizing the survival of this species.

Vipera aspis is a serpent with a fairly robust body, that, when adult, may reach dimensions varying from 50 to 80 cm.
The head is basically triangular and is covered by small scales. If viewed in profile, we can note that the tip of the snout is turned up and that the eye has an iris usually of golden bronze colour on which stands out the vertical pupil. 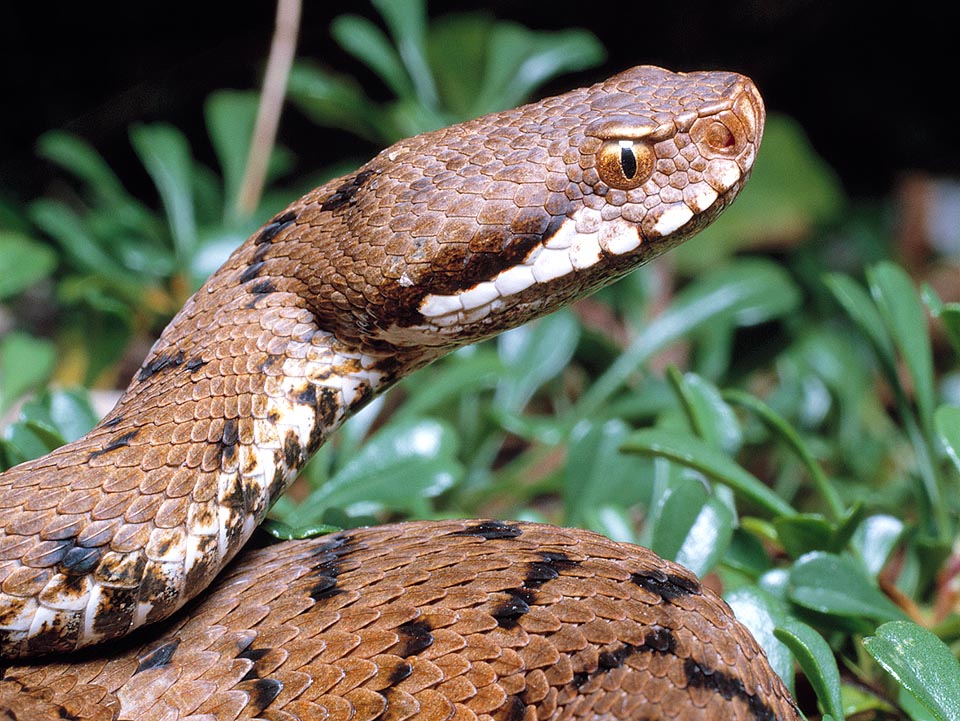 In Vipera aspis the males are usually more slender than the females and have the dorsal ornamentation darker and more marked than the background colour. The base colour covers an ample range of shades of grey, grey-whitish, reddish, sand, brown, grey-green and black. Often the females do have the ventral part of pale grey colour (at times with pinkish hues), pale brown or brown-reddish and the abdomen is frequently dotted of dark spots. The male has a decidedly darker abdomen, at times totally black. 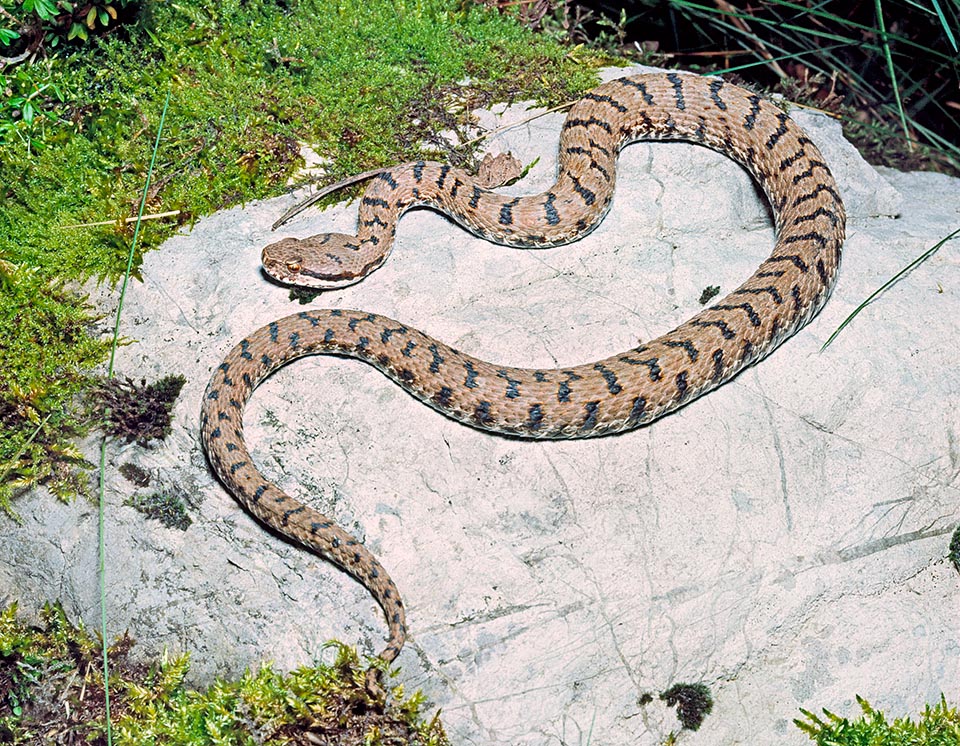 It predates micromammals, saurians, amphibians and birds. The kids, if no young lizards are available, may also eat invertebrates © Giuseppe Mazza

The diet of the common asp viper is formed by micromammals, saurians, amphibians and birds. It is not impossible that the young of Vipera aspis can feed of invertebrates, even if their diet appears to foresee mainly small saurians. As is often the case for other species, also Vipera aspis has a certain plasticity in the choice of the preys that form its diet.

A particular mode of feeding has been observed in the male specimens of Vipera aspis hugyi, that live in Montecristo Island. These animals taking advantage from the strong presence of migratory birds transiting in the island, have developed a particular skill in climbing small shrubs and hunting the birds that there find shelter.

Vipera aspis has a period of activity going from late February to late October, although if in some coastal zones having mild temperatures also during the winter time, we may observe individuals of this species active all over the year. 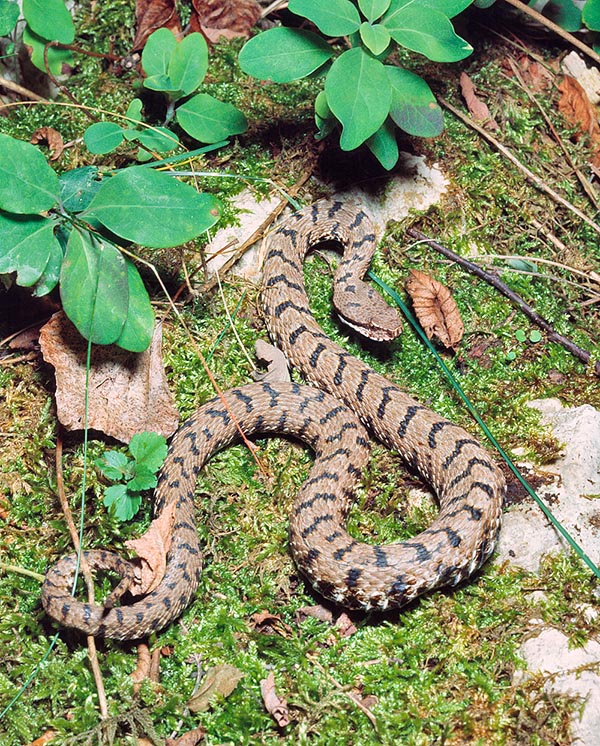 It is usually active from late February to late October, but also in winter along the Mediterranean coasts. The matings occur mainly in spring and the female, ovoviparous, delivers 6-12 kids of 12-22 cm © G. Mazza

Being the Vipera aspis ovoviviparous, it delivers six to twelve kids completely formed and autonomous, that may be 12 to 22 centimetres long. The mattings take place especially in spring, but it is not rare to observe these vipers engaged in courting rituals and coupling also by late summer.

To get information about the venom of the European vipers, their relationship with the man and what to do in case of bite, please read the page concerning the Vipera berus.