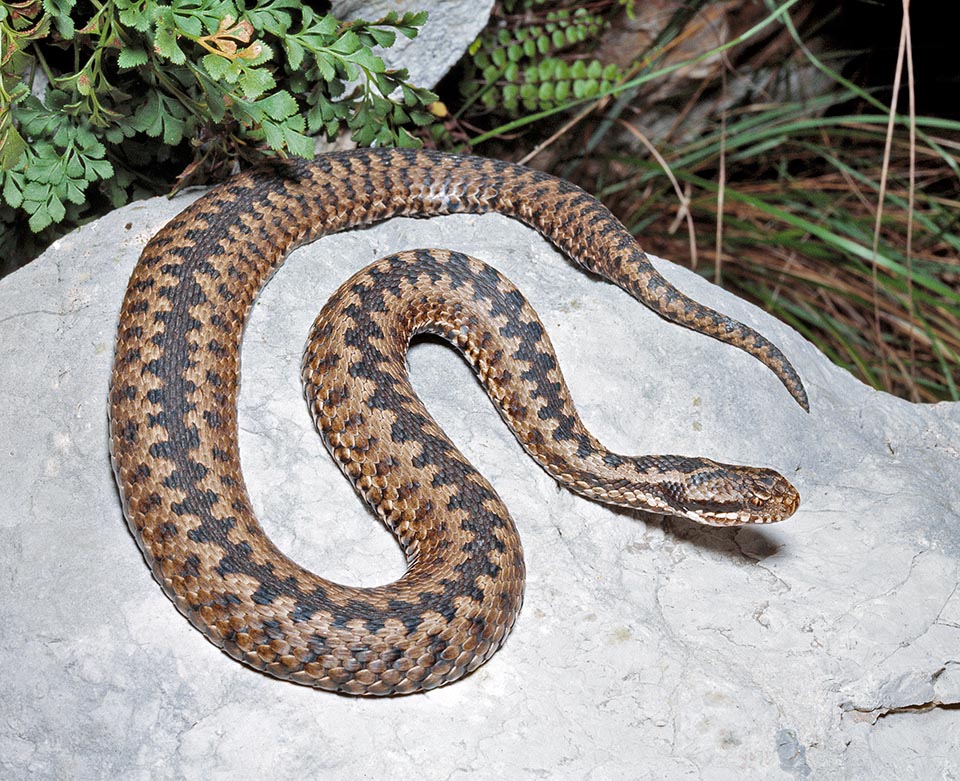 Common in Europe, Vipera berus has an Euro-Asian distribution from Great Britain up to the Pacific Ocean coasts © Giuseppe Mazza

The Vipera berus (Linnaeus, 1758), is a snake belonging to the family of the viperids (Viperidae), known in Italy as Marasso or Marasso palustre. This name, of Celtic origin, should come from that of a weapon and precisely from the contraction of “madarasso”, of the Latin “mataris”, the javelot used against the Romans by the ancient Gauls.

Scientifically, the generic name Vipera instead comes from the contraction of viviparous, from the Latin “vivus” (alive) and “parere, pario” (to deliver, to generate); hence to give birth to perfectly formed and efficient young; whilst the specific name berus originates from the Greek “béros” that means exact, authentic, genuine. The reference concerns the fact that many naturalists have considered this viper as the most common and ancient of Europe. 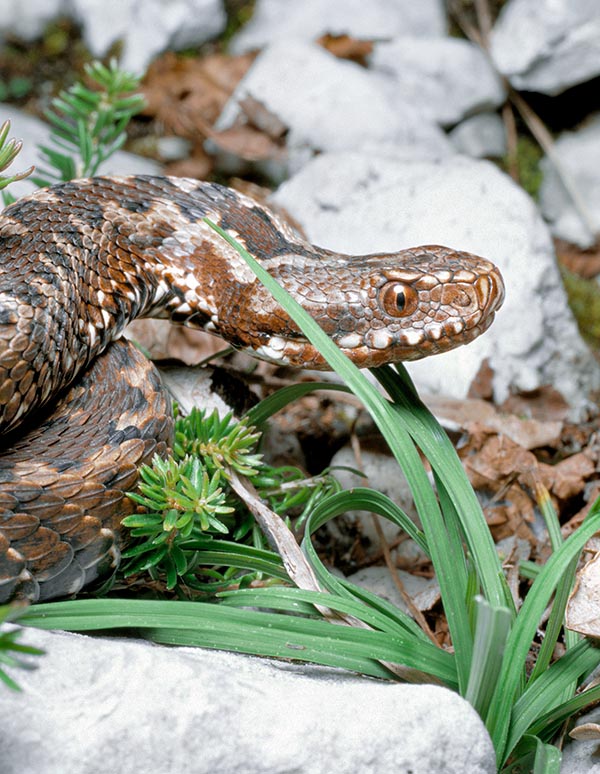 Unlike Vipera aspis, the head of Vipera berus, triangular with the snout apex bent upwards, has an almost ovoid shape. The head of the common European viper is dorsally flat and seen in profile appears slightly rounded. Also here the pupil is vertical, with red, brown, yellowish or black iris © Giuseppe Mazza

Vipera berus: Euro-Siberian chorotype. It displays an Euro-Asian distribution as it may be found from Great Britain up to the Pacific Ocean coasts. In Europe it has an ample diffusion in the central-northern region, whilst in the southern ones it goes up to northern Greece.

The nominal subspecies Vipera berus berus (Linnaeus, 1758) has a range extending from the north of Italy up to Finland, reaching on the west the Great Britain.

In Italy this viper can be observed in high mountain, sub-Alpine and Alpine environments between the 1000 and the 2500 m of altitude. In the rest of its range it can be met from the sea level up to 3000 m of altitude.

The typical habitat is formed by environments such as prairies, pastures, shrubs, screes, land slides, peat bogs and dry stone walls. Often, these environments are cool and humid and have a quite ample thermal excursion between day and night.

In some cases the adders are used to thermoregulate among the arid screes of the slopes, and then to move looking for food in the underlying flat areas, characterized by more humid and more grassy habitats.

This proves that this viper makes more or less long commutings, in order to perform its necessary activities such as: hunting, coupling and research of microhabitat or of microclimate suitable for the needs of the moment. These movements are more visible during the period preceding the winter latency, during which the adders look for a shelter good for wintering.

At the end of the winter period it is not rare to observe snakes in “unlikely” sites, used exclusively for the thermoregulation and the mattings, later on abandoned in favour of other habitats more suitable for carrying out activities such as hunting and gestation. These areas of winter latency, of thermoregulation and of mating may coincide, as well as to be distant from each other hundreds of metres. 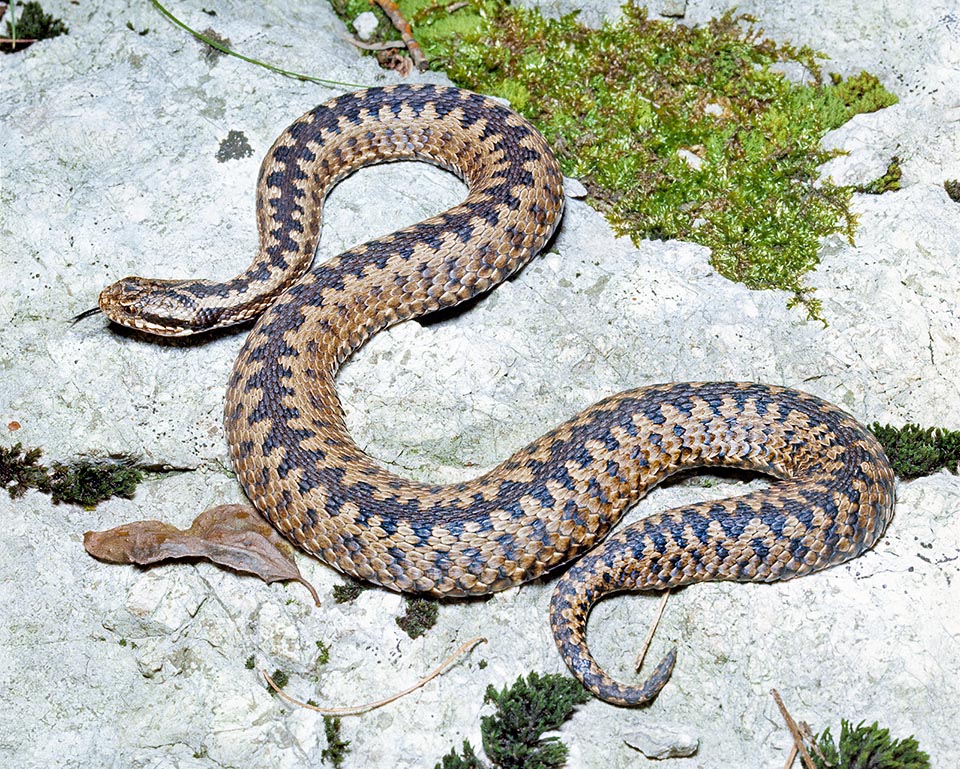 Vipera berus has a relatively slender body, that can reach an average length between the 50 and 70 cm. Usually the females are somewhat bigger and more massive than the males. The head has a slightly ovoid shape and the snout, that dorsally appears flat, when seen in profile is slightly rounded.

The livery of the Vipera berus is variable, hence we may meet specimens with reddish colouration, yellowish, brownish, greyish, whitish and bluish with a zig-zagging black, brown or reddish dorsal pattern. In some populations of adders, a good amount of specimens is melanistic, which means that it displays a totally black livery or there are specimens having a particularly dark livery with a lot of black pigmentation. Between every loop of the dorsal pattern, along the sides, is usually present a more or less roundish dark spot. The head of the adders is often characterized by a dark pattern that may recall a Y, an X or a V. 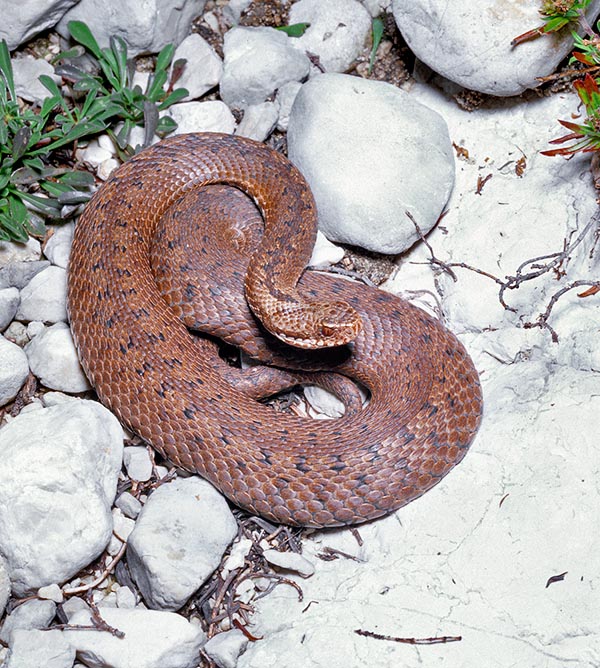 The livery of the Vipera berus is quite variable. Here is an almost uniformely reddish specimen. The typical zig-zagging dark dorsal drawing is just hinted towards the head © Giuseppe Mazza

The ventral part usually displays a black, grey or brownish colour, at times with small dots, whilst the subcaudal area has a yellowish colouration. The vertical pupil stands out on the iris that may be red, brown, yellowish or black.

The hunt is adapted to the type of prey, therefore can be at ambush, when are predated active micromammals and saurians, or can be active, when the viper goes looking for frogs and salamnders among the vegetation, under stones and fallen logs.

The period of activity of Vipera berus is highly conditioned by the altitude and by the seasonal trend as a late spring or an early autumn may cause a winter latency that easily exceeds the six months. However, normally Vipera berus is active from April to October.

The males are the first to abandon the winter shelter to move in the thermoregulation areas. As a matter of fact, contrary to what happens in Vipera aspis, the sexual cycle of the males of Vipera berus has its acrophase in spring.

They must then resume their activity with a greater advance than the females, as they need to effect a two-three weeks thermoregulation in order to complete the spermatogenesis.

After having done the spring moult, the males display a livery with quite showy and bright colours and start immediately to look for females for mating. The males reach the sexual maturity on the fourth year of age and the females on the fourth-fifth. The females mate only every two-three years, time necessary for accumulating again enough nutrients, fats and energy for carrying out the development of the embryos, as also them are ovoviviparous.

The mating occurs in late spring and is preceded by the ritual flghts between males. The development of the embryos goes on till late summer, consequently the females will not have time for effecting a second alimentary cycle before the winter latency. This represents a risk for the survival of many females, as they did not have the possibility of storing sufficient stocks of nutrients and of fat for dealing with the winter season. Usually the Vipera berus delivers from 5 to 15 young at a time which have an average length of 14-23 cm. 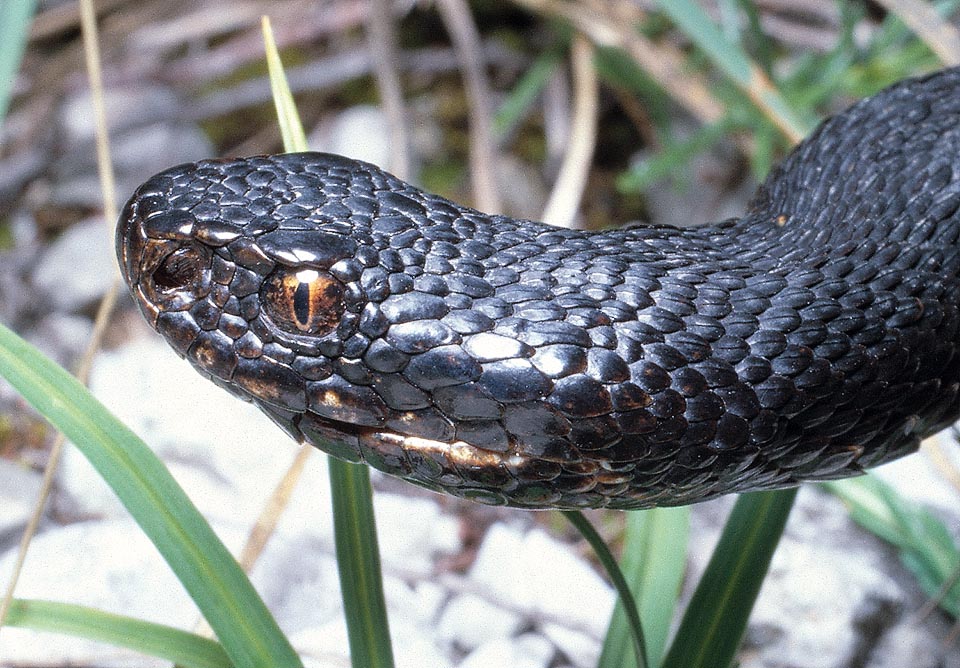 In some populations, a good amount of specimens is melanistic, very dark or black. The adder hunts in humid environments, often even far from the screes where it warms in the sun. The preys are micromammals and saurians, got in ambush, or amphibians it actively looks among the vegetation, under stones and fallen trunks © G. Mazza 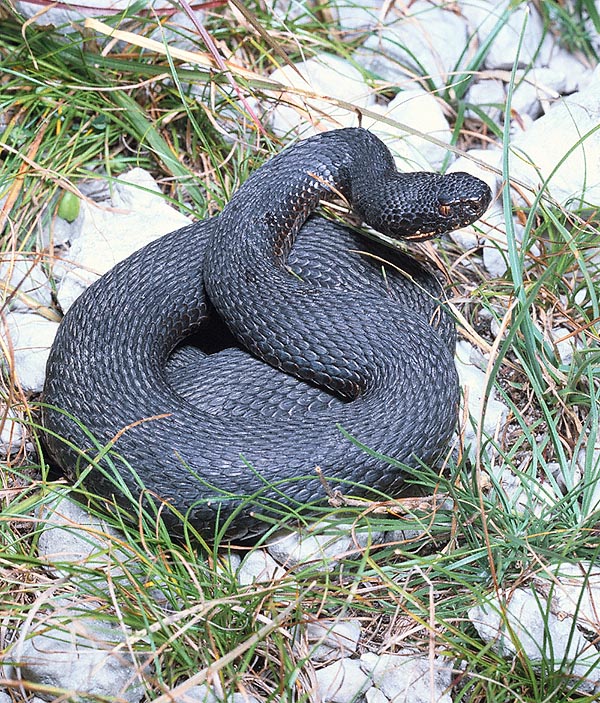 The Vipera berus is a cautious and calm snake that uses the mimicry for defending from the predators. When disturbed it hides in its shelter and only if every escape route is forbidden it swells the body, ready to bite, unwillingly, in defensive posture, trying in any case to scare the aggressor © Giuseppe Mazza

Considerations about the venom of the European vipers

The venom of the snakes is an articulated combination of toxins, proteins and enzymes, whose effect is correlated to its characteristic and quantity. The venom is produced by the venomous glands present on both sides of the head, under and behind the eye. These are modified salivary glands and correspond to the parotid glands, present in the mammals. For this reason, the venom may be reasonably defined as a proteolytic and haemorrhagic saliva. For injecting the venom in the preys, the viper uses two venomous teeth that have the characteristic of being canaliculate and connected to the venom glands by means of a special duct. This allows the direct passage of the venom from the gland to the bitten subject. The venom is the main method with which the venomous snakes get the food, starting its digestion.

The indole of the viper is calm and not aggressive, but in situations of danger it defends itself; its only defense modality is the bite. We have to assume that under no circumstances the viper does attack the man. It takes advantage from the mimicry to defend itself from the predators. However, if the man or a predator gets too close, the viper tries to escape retreating into its shelter, that often is not far away. If every way to escape is interdicted, the viper will try to appear more threatening than what it really is, swelling its own body, assuming a defensive posture and emitting a hiss inhaling and exhaling deeply air into the lungs. These warning signs are an invitation to get away. If they are ignored and we approach further, or we try to catch the viper, this one will defend by biting.

How to behave in case of bite 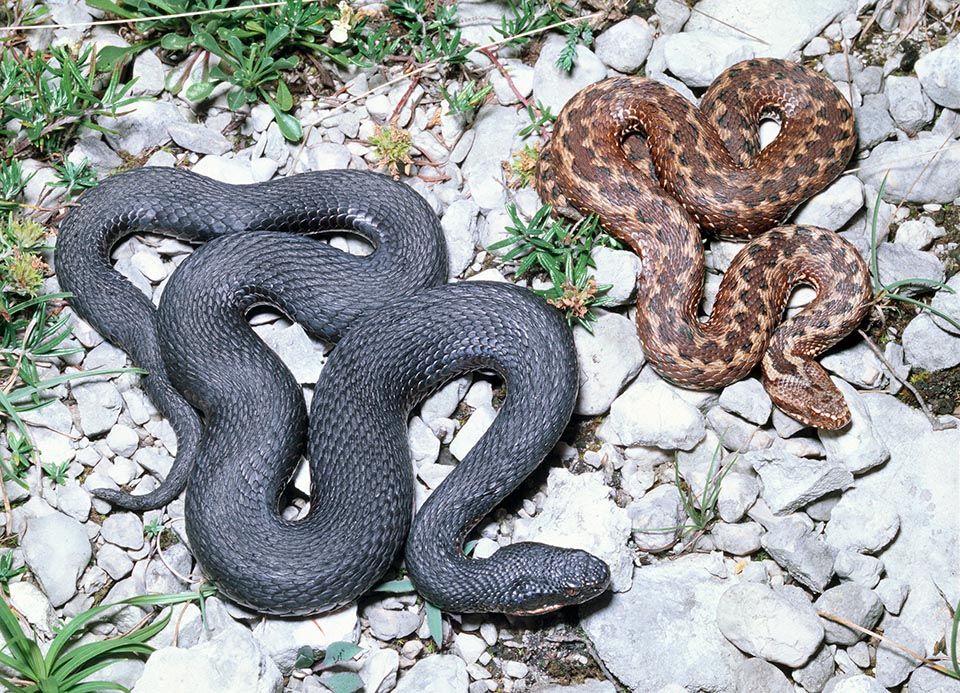 Melanistic form and reddish specimen with the dark red pattern. For the snakes the venom is an important digestive they do not love to waste and the man is not a prey © Giuseppe Mazza