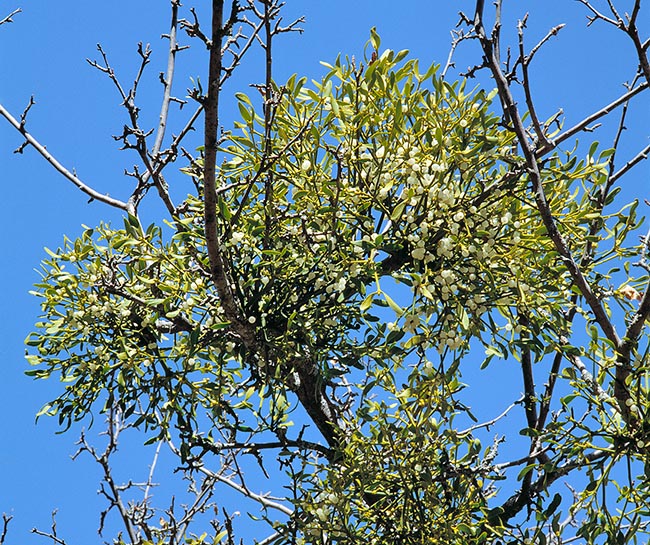 The genus Viscum (which, as per a recent phylogenetic revision, is classified into the family Santalaceae) includes, after various Authors, 70 to 100 species native to the temperate and tropical regions of Europe, Asia, Africa and Oceania. The Common mistletoe (Viscum album L. 1753) has Eurasian distribution (from Europe to Japan).

The name of the genus comes from the Greek “ixós”, and the Latin “víscum”, mistletoe (from viscósus, a, um, due to the sticky liquid contained in the berries); “album” comes from the Latin word of the same name, meaning white.

Pluriannual species, is a small, bushy plant, glabrous, very ramose, epiphytic (it grows on various trees and shrubs) and hemi-parasitic (green plant provided with chlorophyll, autotrophic, which gets part of the alimentary substances with the photosynthesis, but that absorbs from the lymph of the hosting plant water and mineral salts).

It is a shrub with woody stems and branches, of globose appearance, having several dialectal names (birdlime mistletoe, mystyldene, Lignum Crucis, etc.) known since the old times and surrounded by hundreds of legends and traditions. It is 20 to 50 (<100) cm tall, with woody stems, cylindrical, ramified dichotomically, frail, twisted, with green-yellowish bark, fleshy and longitudinally grooved. Evergreen leaves, coriaceous-fleshy, simple, opposite, with lanceolate-spatulate lamina (1,2-1,5 x 4-5,5 cm), blunt at the tip and cuneate at the base, with 3-5 (7) evident nervations parallel to the foliar margin. 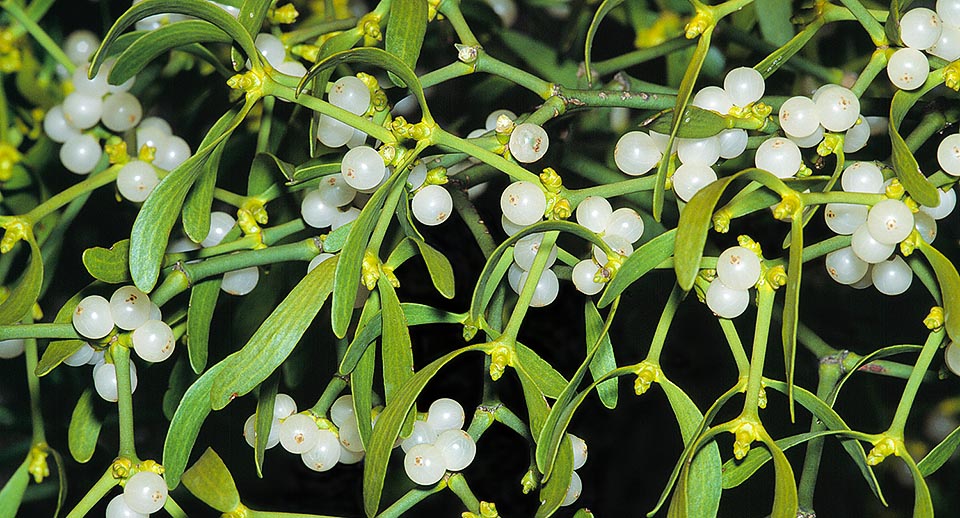 It is a hemiparasite, that is, despite being able to carry out the photosynthesis by itself, it needs to obtain water and mineral substances from its host © G. Mazza

Flowering occurs from March to May. The flowers are unisexual, sessile, 4-mer, yellow or yellow-greenish, very small (1-3 mm) in dense axillary or terminal fascicles. The male flowers have no calyx, and have stamina almost connate to the petals, with dehiscent anthers as pores. The female flowers have quadridentate calyx and 4 petals. 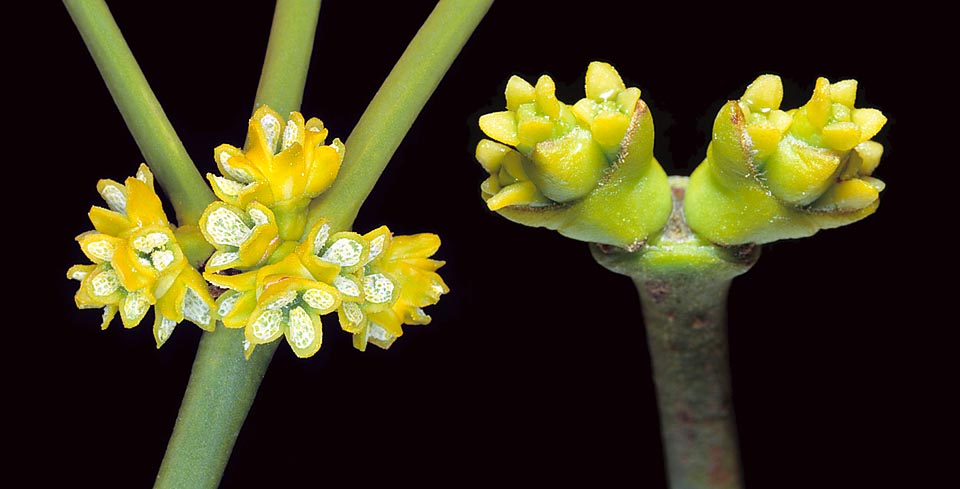 Male flowers without calyx with stamina almost wholly connate to the petals and dehiscent anthers as pores. Female ones, right, with quadridentate calyx and 4 petals © Giuseppe Mazza

The fecundation is done by insects (flies, bees, ants) whilst the dissemination is entrusted to the birds who are greedy of the berries of which they eat the viscous part and, rubbing them on the branches of the hosting plants and getting free of the seeds that remain often entangled on their bark, ready for the germination. Various species are greedy of the berries of mistletoe, such as the blackbird, the thrush, the blackcap, the fieldfare, the Bohemian waxwing but especially the mistle thrush, which, not by chance, has the scientific name of Turdus viscivorus , which means thrush eater of mistletoe! 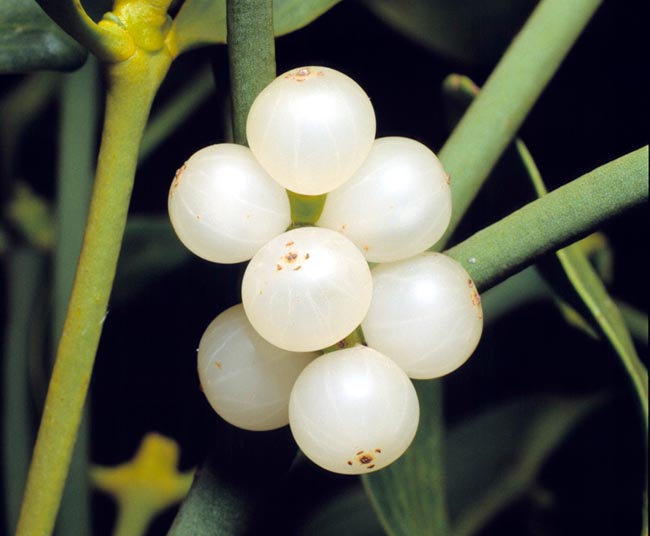 The fruits, present from October to January, are spherical berries (5-8 mm), of pearly colour containing only one seed similar as look to the grape seed, pr to a small maize kernel but of green colour, immersed in a gelatinous-viscous pulp (mesocarp).

The poachers, when in winter the mistletoe is easy to be seen among the crown of the trees without leaves, collect these viscous berries to prepare, by fermentation and subsequent treatment with linseed oil, the “mistletoe or birdlime of the fowlers”, good for unlawfully seizing the small birds.

The Common mistletoe (subsp. album) is a fairly rare plant growing from the plain up to 1200 m of altitude, especially on poplars, lindens, elms, walnuts, ashes, willows, rowans, black locusts, birches, maples, apples, pears, hawthorns, plums and almonds trees, etc., inserting into the branches transport tissues of these host plants, particular roots called haustoria charged to “suck” the lymph. Another species of the same family known as summer mistletoe (Loranthus europaeus) is similar to the common mistletoe as per look and toxicity, but growing almost exclusively on deciduous oaks (rarely on beech, chestnut and olive) but distinguishes as having non persistent leaves in winter, less leathery, with short petiole and the yellowish berries. 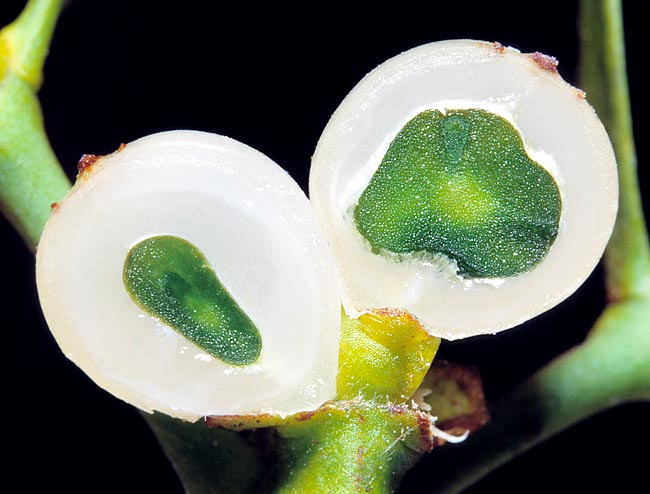 In the Celtic tradition, the mistletoe was called “oloaiacet” and represented the strength and the power of the fire, the materialization of the lightning (seen that it develops on the branches and has no roots) and was considered as a sacred plant because “fallen from the sky”.

Its collection foresaw a precise ritual: it was necessary to wait for the night of March or the winter waning moon, when the sun was in the fire sign of the Sagittarius, and to cut the mistletoe at the base with a special golden sickle held with the left hand. It was then left to macerate in water coming from a sacred source to obtain a drink against the sicknesses of the body and of the mind….

Its pagan cult was then absorbed by the Christianity which sees in the mistletoe the image of Jesus (example of hierophany) as reconfirmation of the solar and divine nature assigned to this curious vegetable.

It is fairly easy to cultivated the mistletoe: are necessary some berries collected in late autumn or in winter and a suitable tree (better if a fruit tree, such as apple, pear, cherry), then to look for small cracks in the lower part of the branches looking south, to take off the seed with the tweezers and put it into the cracks. It can be done also with a “cleft” grafting by means of a small branch of mistletoe provided with a pair of leaves and the base cut bevelled, inserted under the bark of the host plant through a T-shaped incision; then to cover with putty and tie.

Birds disperse the seeds (left close-up) which fall adhering to trunks and branches. They put roots, the haustoria, to suck the lymph © Giuseppe Mazza

From the forest point of view, it is necessary to keep in mind that a massive attack of mistletoe on the trees may slow down the growth in height and in diameter of the stem, depreciation of the wood due to small cavities created by the haustoria in the case young trees are parasitized. The branches and the leaves of the mistletoe contain the alkaloid viscol (or viscalbine), the glycoside viscoflavine, the polypeptide viscotoxin, triterpenoid saponosides, inosite, choline, lecithin, propylcholine, quercitrin, tiratin, polysaccharides, mannite, galacturonans and arabinogalactans, vitamin C, etc. 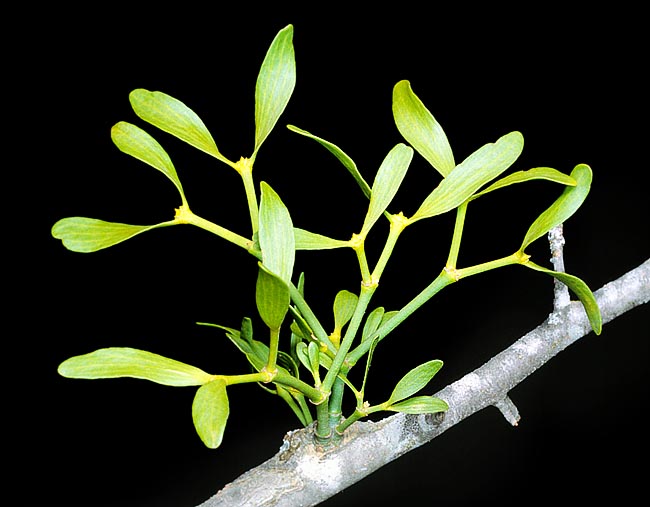 The preparations based on mistletoe are suggested for lowering the blood pressure, in the chronic interstitial arteriosclerotic nephritis with nitrogen retention and atheromas, in the pregnancy albuminuria and as antispasmodic in the convulsive asthma, whooping and spasmodic cough, as anticonvulsant in epilepsy.

Furthermore, it has been demonstrated an antineoplastic action of the of the lectins isolated from the mistletoe and stimulant of the organic defences which is still object of specific researches but already sustained in the no. 3, year XIII of the “Rivista di Biochimica e Terapia” (Journal of Biochemistry and Therapy) published in Rome in 1943. I remind and underline that the berries of the mistletoe are toxic and the poisoning causes nausea, vomit, abdominal pain, mydriasis (pupil dilation), slowing of heartbeat and muscles spasms. The lethal dose varies from 10 to 20 berries! In any case, all employments based on the mistletoe are to be reserved to the strict medical control and their use is discouraged in case of therapies with anticoagulants, antidepressants and immuno-depressors.

Calming infusion for the spasmodic and convulsive coughs

To infuse for 15 minutes 40 grams of leaves in one litre of cold water for two hours, after that to warm up to 80 °C and take off from the fire. To drink a cup before the main meals.

→ To appreciate the biodiversity within SANTALACEAE family please click here.