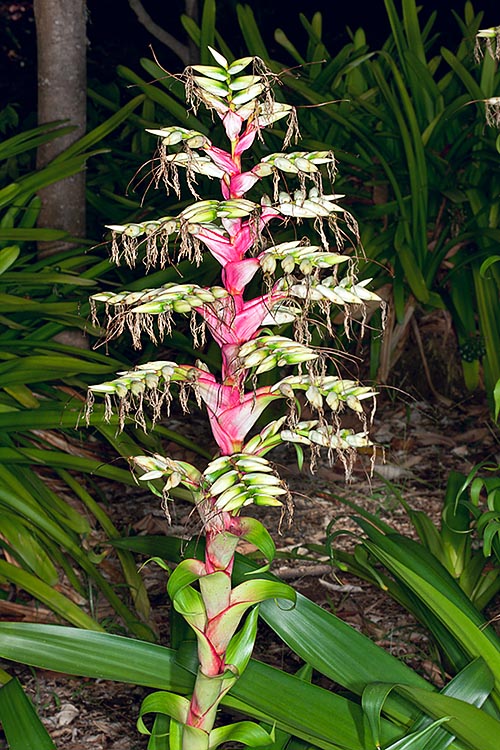 The species is native to Brazil (Rio de Janeiro), where it grows on coastal rocky granite slopes.

The genus is honoured to the Dutch botanist Willem Hendrik de Vriese (1806-1862); the name of the species is the Latin adjective “geniculatus, a, um” = knotty, with reference to the inflorescence.

The Vriesea geniculata (Wawra) Wawra (1866) is an evergreen herbaceous species, monocarpic (it fructifies only once then dies), acaulous, lithophytic, tall, inflorescence included, up to about 1,8 m, it presents a funnel-shaped rosette formed by numerous leaves placed in way to form a central cavity usually full of water.

The leaves are oblong with long pointed and curved apex, unarmed, 0,7-1,2 m long and 5-14 cm broad, of bright green colour.

The inflorescence, at the centre of the rosette, is formed by a robust reddish floral scape about 1 m long and of 2-3 cm of diameter covered by bracts resembling to green colour leaves, longer than the internodes, ending in a compound raceme, that is, formed by more racemes departing from a central axis, up to about 0,7 m long. The bracts under the single racemes are elliptic with pointed and curved apex, about 7 cm long and broad, of cream yellow colour in the central part, pink at the base and at the margins and green at the apex.

The single racemes, in number of 20-30, the lower ones being up to about 25 cm long, are covered by keeled elliptic bracts about 2,5 cm long and broad place on two opposite (distichous) rows of greenish white colour in whose interior develop the flowers with oblong sepals, about 3,2 cm long and 1,5 cm broad, and yellow petals, 6-8 cm long.

The fruits are ovoid capsules with pointed apex about 3,5 cm long, dehiscent (which open spontaneously when ripe), containing fusiform seeds about 0,8 cm long provided with pappus (feathery appendage which favours its dispersion by means of the wind). It reproduces by seed and at amateurish level, by vegetative way through the new plants generating at the base of the plant and that may be detached when they have reached a size of at least a third of that of the mother-plant. Imposing species for its foliage as well as for the inflorescence, cultivable in open air in full sun in the tropical and subtropical climates and marginally in the warm temperate ones, sheltered from the winter rains, where it can stand temperatures just under the 0 °C for a very short period; it stands the high temperatures, the wind, periods of drought and high salinity, it can, therefore, be cultivated in rocky gardens and close to the sea.

Elsewhere, it can be cultivated in pot, even if its dimensions usually discourage this, on much aerated, porous and draining substratum, in a position as much luminous as possible with winter temperatures never under the 14 °C. The waterings must be regular in summer, but allowing the substratum to dry up before watering again, and spaced in winter and the ambient humidity, in presence of dry air and high temperatures, may be increased with nebulisations by utilizing water at local temperature and not calcareous in order to avoid unattractive spots on the leaves. In summer, it is good to leave some not calcareous water in the central cavity formed by the rosette of leaves, renewing it frequently so to avoid the formation of a mosquito larval nest, whilst in winter it is preferable to leave it rather dry, in presence of low temperatures, in order to avoid possible rottenness.