The species is native to Brazil (Espírito Santo, Paraná, Rio de Janeiro and São Paulo) where it grows on the trees of the rainforest at low altitudes.

The genus is dedicated to the Dutch botanist Willem Hendrik de Vriese (1806-1862); the specific name is the Latin adjective “hieroglyphĭcus, a, um” = hieroglyphic, in its turn derived from the Greek “ἱερογλυφικός”, word formed by “ἱερός” (hierós) = holy and “γλύφω” (glypho) = to engrave, to write, with reference to the showy variegations on the leaves.

The Vriesea hieroglyphica (Carrière) É.Morren (1884) is an evergreen herbaceous species, monocarpic, acaulous, epiphyte, formed by an infundibuliform rosette, up to 1 m tall and of 0,8-1,8 m of diameter, of numerous leaves that form a central cavity where gather rainwater and animal and vegetable debris that by decomposing contribute to the nourishment of the plant. 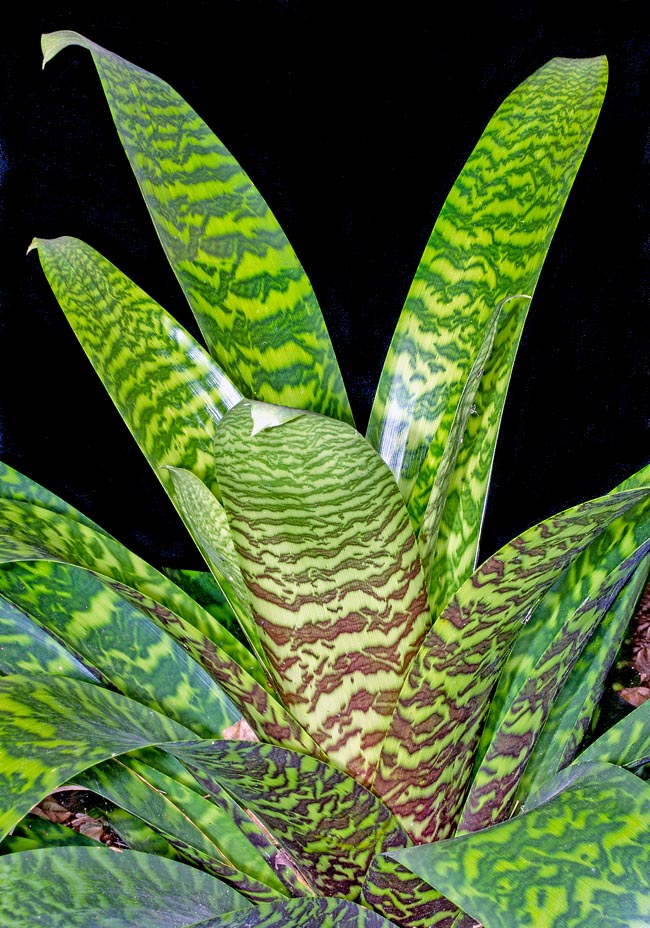 Native to Brazil, Vriesea hieroglyphica is a big epiphyte, reaching 1 m of height, with a characteristic cavity at the centre for collecting rainwater as water reserve and the animal and vegetable debris that decaying contribute to the nourishment of the plant. It is cultivated also in interior spaces due to the very decorative leaves © Giuseppe Mazza

Erect floral scape at the centre of the rosette, about 28 cm long, surrounded by lanceolate foliaceous bracts with acute apex, longer than the internodes, of decreasing length upwards. Paniculate inflorescence, 50-60 cm long, formed by 12-20 spikes subtended by acuminate ovate bracts of green colour.

Calyx with 3 sepals, about 3 cm long and 1 cm broad, of yellowish green colour, corolla with 3 free petals of yellow colour,4-5 cm long, 6 stamens inside the corolla, arranged on 2 series of 3, and superior ovary.

A characteristic of this species is that at the moment of the flowering, the flowers bend in a direction opposite to the axis of the inflorescence, whilst the floral bracts remain in their original position.

The fruit is a capsule containing numerous seeds provided at the extremity of a tuft of hair (pappus) that facilitates their dispersion through the wind.

It reproduces by seed, put superficially on draining organic and aerated loam maintained humid, but without stagnations, at the temperature of 24-26 °C, the plants so produced may take 8-10 years for blooming in turn, and by micro-propagation.

On amateur level it propagates through the young plants it produces rather inside the rosette, that may be detached, with extreme caution, cutting the leaves of the mother plant till when discovering its base.

Species of very high ornamental and landscape value, together with the numerous selected varieties, amply cultivated, due to its decorative foliage, in the gardens of the tropical and subtropical regions and marginally in the milder warm temperate ones, in sheltered position, as does not stand temperatures just under the 0°C if not for a very short period. Usable as epiphyte, on the branches of the trees, or as terrestrial, individually or in group, in filtered sunny light as well as in semi-shade, on soils rich of organic substance perfectly draining and aerated, not bearing water stagnations, maintained almost constantly humid.

In the central cavity must be ensured the continuous presence of not calcareous water, to be renewed frequently in order to prevent the proliferation of mosquitoes. Cultivable also in pot, with the previously mentioned cautions, for the decoration of open spaces, where the climate allows it, and of greenhouses and spacious interiors, due to the dimensions it can reach, even if little luminous, with lowest night winter temperatures not under the +15 °C and ambient humidity 65-80 %. If this is not sufficient recourse may be done to nebulizations with non-calcareous water and ambient temperature. Monthly fertilizations in spring-summer with a foliar product balanced with micro-elements with a dosage equal to ¼ of that shown in the package.