The Pearly razorfish (Xyrichtys novacula Linnaeus, 1758) belongs to the class of Actinopterygii, the ray finned fishes, to vast order of Perciformes and to the family of Labridae.

Concluding, as the Genoese say in their dialect, it is also a “Pescio razù”, that is a razorfish. This, obviously, due to its flat structure which allows it to disappear n a jiffy under the sand, for escaping the predators, for sleeping or for spending the winter.

Present in all the Mediterranean, but the Black Sea, it is found on the two sides of the Atlantic and also in South Africa, with a liking for the Caribbean and, usually, the warm waters.

Apart the coral reefs, more than the rocks, it loves the sandy, clean, low bottoms and the seagrass meadows. We usually find it between the 5-10 m of depth, even if, in order to shelter from the winter cold, it may go down up to 90 m. 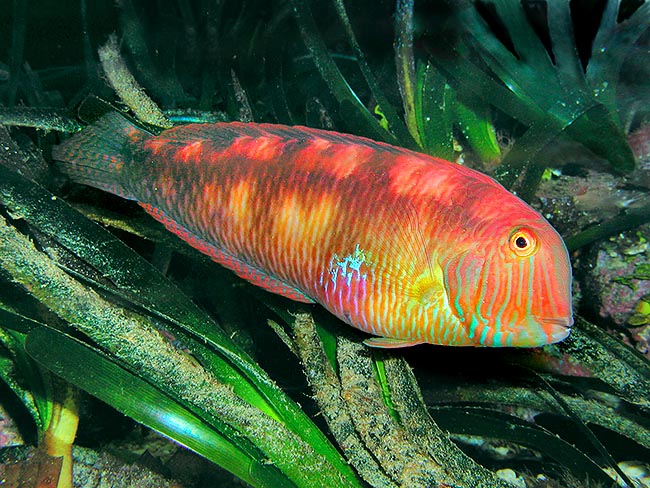 It measures 15-20 cm, but the males, bigger, may exceptionally reach the 30 cm. Apart the thickness, it can be recognized at once thanks to its showy livery and the profile of the head, almost vertical.

The eye is small, very high in respect to the mouth, horizontal and tiny, but well equipped of teeth. The central ones, bigger, are protruding and are sharp as canines, but there are also, more deeply, some molars and, finally, we can see some flat teeth on the pharynx.

It mainly nourishes of molluscs and crustaceans, but also of echinoderms, cnidaria, bryozoans and foraminiferans.

In the Mediterranean, the reproduction takes place in summer, with floating eggs with a very rapid development. The post-larval stages are little known, but it seems that the young spend all the winter under the sand. The vulnerability index of this species is of 36 over 100.

Xyrichtys novacula was last modified: May 3rd, 2022 by Giuseppe Mazza