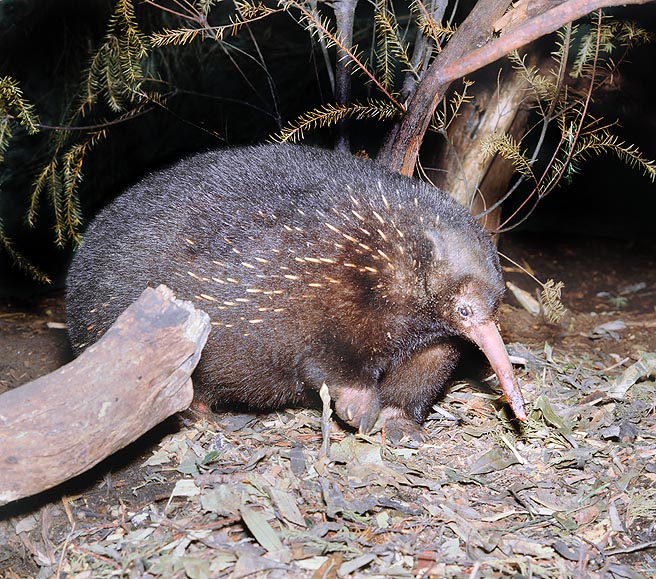 They are all aplacentata mammals, leading to the order of the Monotremes (Monotremata).

Also for this species, there are no fossil remains older than two million years, Quaternary era, and Pleistocene period.

All echidnas are endangered animals and quite rare, but the rarest one, amongst the five species of the two genera, is the Zaglossus bruijnii so much that the IUCN and the CITES, seen also the particularity of the species, have inserted the same into the list of the 200 rarest animal species of the planet Earth.

It is endemic to New Guinea, where is more specifically located in the eastern coast of the island.

They are animals capable to adapt to various types of biotopes, from the bush and tropical hill forests up to about 3.800 m of altitude over the sea level! 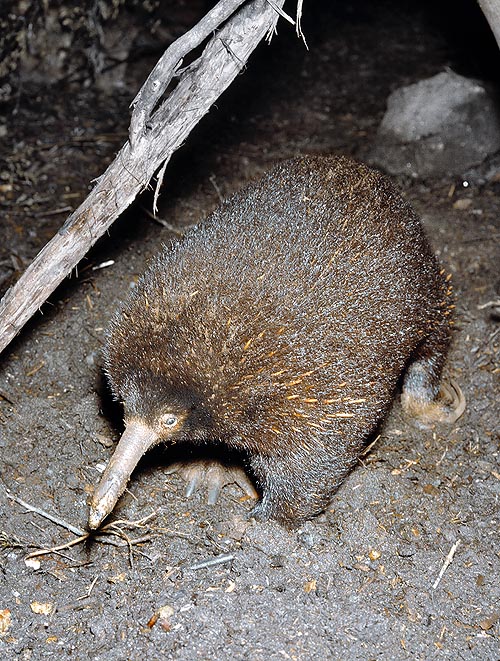 The general lines definitely recall those described for the Tachyglossus aculeatus (vedi relativa scheda), the differences with the species of the genus Tachyglossus concern the beak, or snout, which, in this echidna, as well as in the others of the genus Zaglossus, is long, as well as streamlined cylindrical-tubular, and, also, the tip is bent downward.

The other characteristic differentiating them from the species of the other genus is to have a much lower density of spines covering their back and sides. And, furthermore, these spines are of white colour.

The remaining characters are equivalent to the other echidnas, also the alimentary ecology it is so, as it nourishes of ants, termites and larvae of coleopterans, which it finds scraping the soil. A common character to all the echidnas and therefore also in this species, is the existence of the cloaca.

The Zaglossus bruijnii measures an average of 80 cm of length, per a weight of 10-12 kg. It turns out to be, therefore, one of the biggest species for both genera, seen that the other echidnas have lengths varying from the 40 and the 80 cm, with weights from 7-8 to 12 kg.

Also this echidna loves to carry on, for most of the year, a solitary life (the males as well as the females, which do not show characters of sexual dimorphism); then, when the mating season approaches, between July and August, the male goes looking for some receptive female.

All echidnas are monogynous; fights with other male competitors for the conquest of a female are not infrequent.

In this species, the female lays one egg only into the abdominal pouch; from this egg comes out a puggle, initially blind, nursed inside the pouch till when it will not begin to get the first spines. At this point, the mother takes it to a clam area, where it will nurse the young till the weaning.