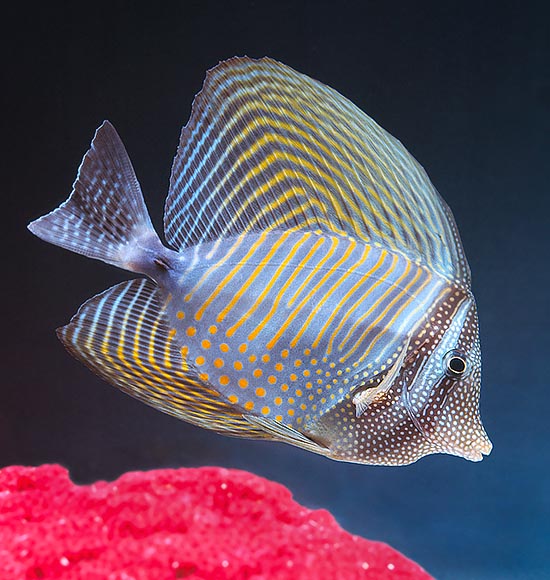 The Desjardin’s sailfin tang (Zebrasoma desjardinii Bennett, 1836) belongs to the class of Actinopterygii, the ray-finned fishes, to the order of Perciformes and to the famly of Acanthuridae.

The name of the genus “zebrasoma”, comes from “zebra” = zebra, the well known African equine, and from the Greek “soma” = body, which means an animal “with striped body” due to bands unusually vertical in a surgeonfish.

The name of the species “desjardinii” honours the memory of the French zoologist Julien Desjardins (1799-1840) who has spent long time in the island of Mauritius and who was collaborating with the Paris Natural History Museum.

The desjardin’s sailfin tang is common in the Red Sea, in the Arabic Sea, in the Gulf of Aden and generally in the tropical waters of the Indian Ocean, from northern South Africa and Madagascar up to the Maldives, to India, Sri Lanka, Cocos Islands, Christmas Island and the western coasts of Indonesia.

It lives in the madreporic formations and along the rocky coasts covered by seaweeds, usually in the first 25 metres of depth.

The caudal peduncle shows the cutting blade typical of the surgeonfishes and the mouth has tiny teeth with 11 indentations above and 5 below. 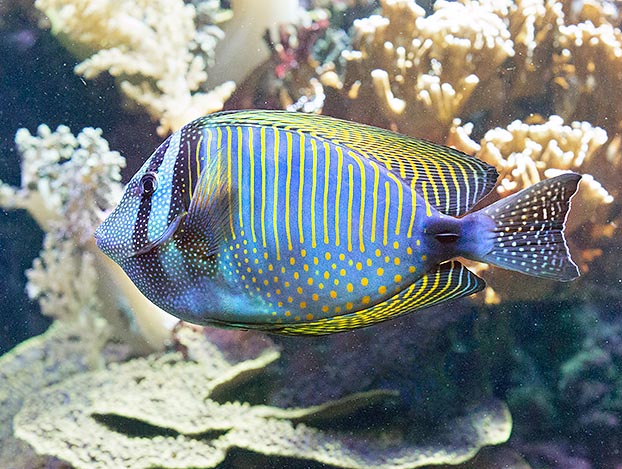 There are two dark vertical bands in the zone of the head: one crosses the eye and the other stands at the level of the pectoral, with an evident mimetic function.

It is a fish living mostly solitary or in pair. It spends the whole day swimming grazing microscopic or more consistent algae and moving the debris.

The eggs are pelagic and the juveniles have a livery which reminds that of a similar species: the Zebrasoma velifer. They are not easy preys. For the aquaria market, it is necessary to seize them during the night, when the sleep sheltered by the madrepores.

The desjardin’s sailfin tang flesh is surely not prized, even if it is consumed by the local populations when it gets in the nets.

The populations of Zebrasoma desjardinii may double in 1,4-4,4 years, but it is a species to be kept under control with a vulnerability index of 32 per 100.