The world capital of platinum. 84% of world production is mined in an area of South Africa. The mineral is found in a narrow vein, which descends for many kilometres towards the centre of the earth. The method of extraction. 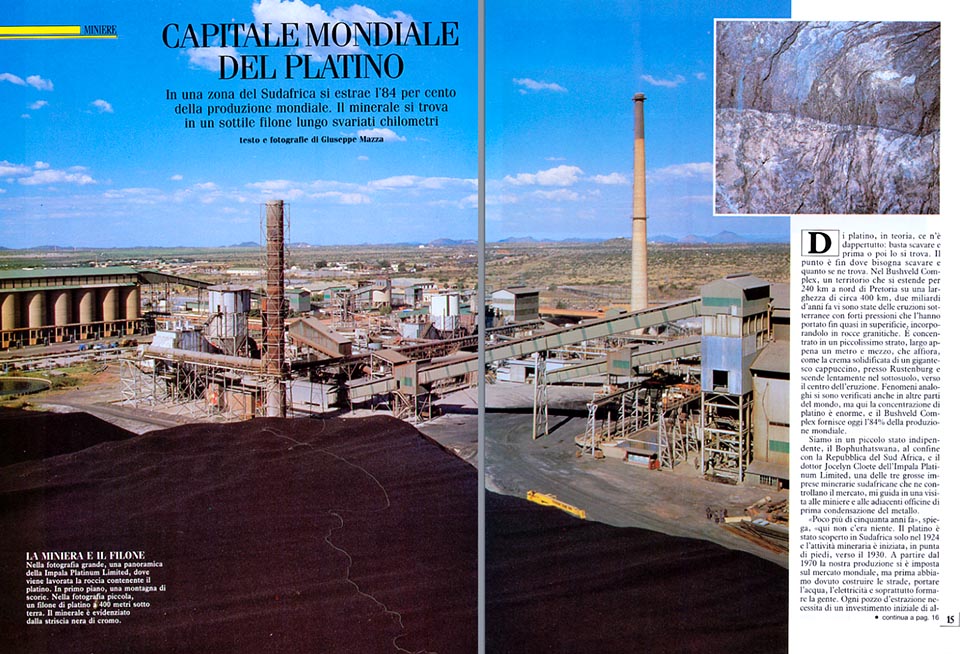 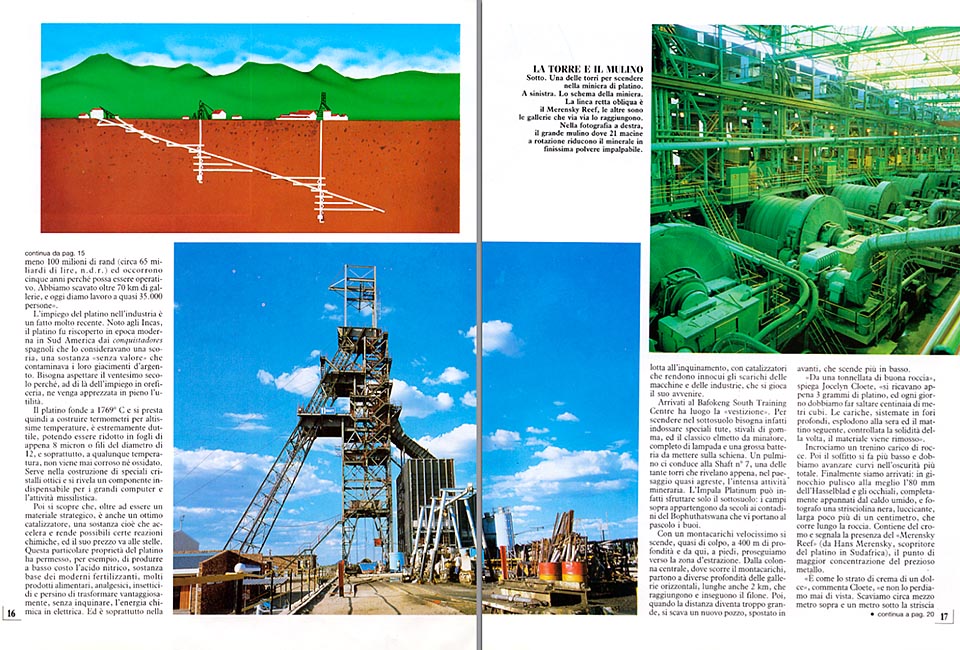 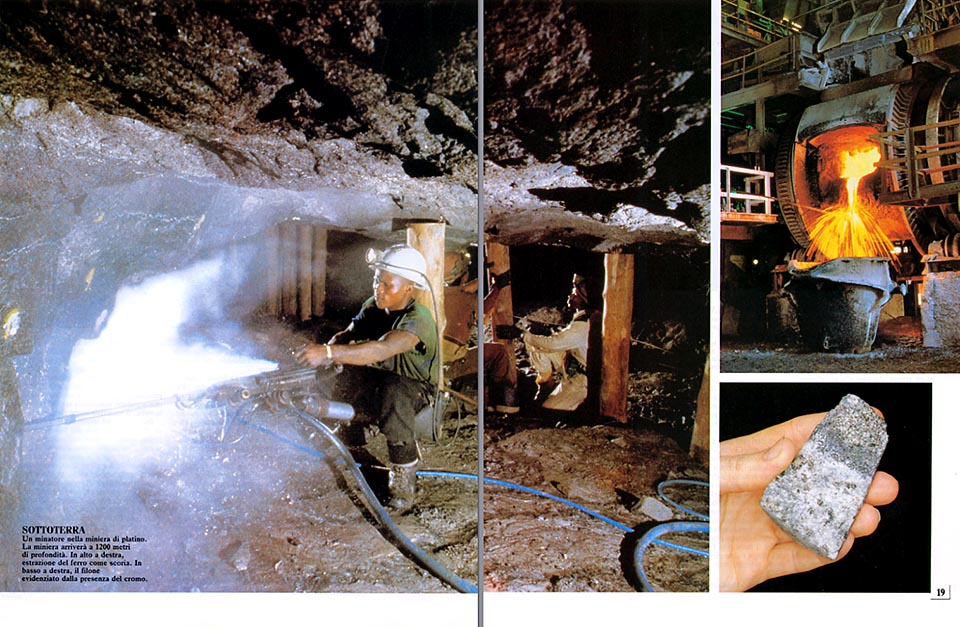 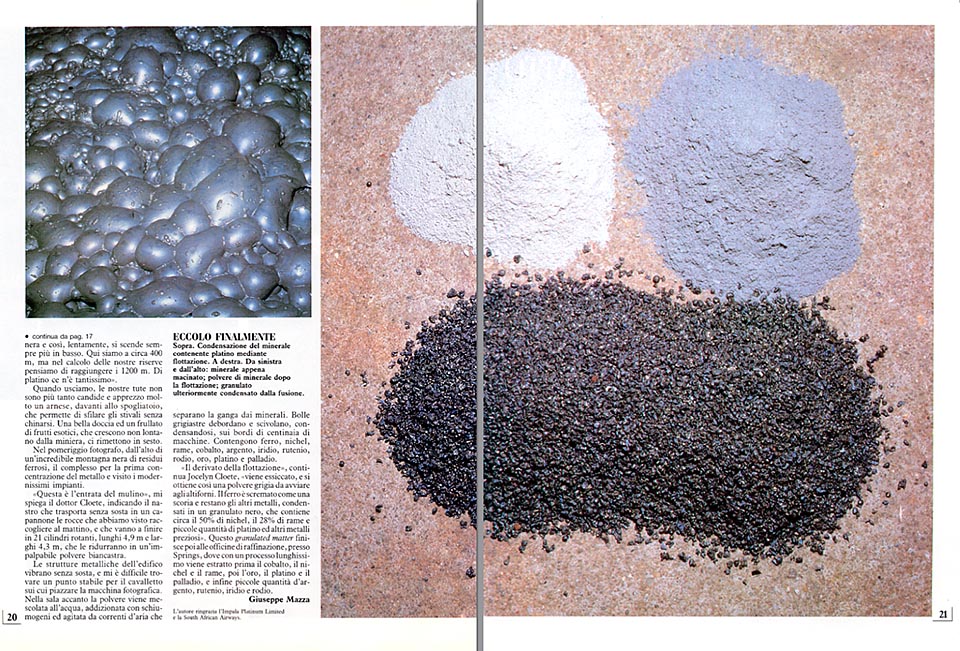 Theoretically, platinum can be found everywhere: it’s sufficient to dig, and, sooner or later, you find it. Problem is how long you have to dig, and how much of it you can find.

In the Bushveld Complex, a territory which spreads for 240 Km. north of Pretoria, on a width of about 400 Km., two billions of years ago, there have been some underground eruptions, with strong pressures which have carried it up to almost the surface, mingling it in granite rocks.

It’s concentrated in a very small layer, wide only a metre and a half, which crops out, like solidified cream on a gigantic cappuccino, close to Rustenburg, and goes down, slowly, in the subsoil, towards the centre of the eruption.

Similar phenomena have occurred also in other parts of the world, but here the concentration of platinum is enormous, and the Bushveld Complex furnishes, nowadays, the 84% of the world production.

We are in small independent nation, the Bophuthatswana, at the boundary with the Republic of South Africa, and Dr. Jocelyn Cloete, of Impala Platinum Ltd., one of the three major mining industries of South Africa, which control its market, leads me in a visit of the mines and the nearby workshops of first condensation of this metal.

“More than 50 years ago,” he explains me, “there was nothing here. Platinum has been discovered in South Africa only in 1924, and the mining activity has started, discreetly, around 1930. Starting from 1970, our production got the upper hand in the world market but, before, we had to build roads, provide water, electricity, and, mainly, train the people. Every extraction shaft needs an initial investment of at least 100 millions of Rand (about 65 billions of Liras), and it takes five years to become operational. We have dug more than 70 Km. of tunnels, and, nowadays, we employ almost 35.000 workers.

The utilization of platinum in industry is a very recent achievement. Known to ancient Egyptians and to Incas, platinum was discovered again, in modern times, in South America, by the Spanish “conquistadores”, who considered it as a dross, a substance “without any value”, which contaminated their gold layers, and we have to wait for the 20th century, in order that its utility is fully appreciated, apart its utilization in jewellery.

It melts at 1769°C and, therefore, is very useful to fabricate thermometers for very high temperatures, is extremely ductile, as it can be reduced in sheets of only 8 micron, or threads of 12, and, above all, at whatever temperature, is never corroded or oxidized.

It is employed in the construction of special optical crystals, and is an absolutely necessary component of big computers and of the missile industry.

Then, they discovered that, beyond the fact of being a strategic material, it’s also an excellent catalyzer, that is, a substance which accelerates and renders possible certain chemical reactions, and its price raised enormously.

This particular peculiarity of platinum has allowed, for instance, to produce, at low cost, the nitric acid, basic substance of modern fertilizers, many foodstuffs, analgesics, insecticides, and even to transform, advantageously, chemical energy into electrical. And it is, mainly, in the struggle against pollution, with catalyzers which render innocuous the exhausts of cars and industries, that its future is involved.”

Once at the Bafokeng South Training Centre, after a light refreshment, the “dressing” takes place. To go underground, in fact, we must wear special overalls, rubber boats, and the typical miner’s helmet, complete of lamp and a big battery, to be put on the back.

A minibus takes us to the “Shaft” no. 7, one of the several towers which hardly disclose, in the almost rural landscape, the intense mining activity. The Impala Platinum can, in fact, exploit only the subsoil: the fields above belong, since centuries, to the countrymen of Bophuthatswana, who graze there their cattle.

With a very fast elevator, we go down, all at once, to a depth of 400 metres, and from here, on foot, we go ahead towards the extraction area.

From the central column, where the elevator operates, some horizontal tunnels, even 2 Km. long, start at various depths, and reach and follow the vein. Then, when the distance if too big, a new shaft is dug, displaced ahead, and this one goes more downwards.

“From a Ton of good rock,” Dr. Jocelyn Cloete explains me, “we can extract only 3 grams of platinum, and every day we must shatter hundreds of cubic metres. The explosive charges, placed in deep holes, explode in the evening, and the following morning, after having checked the solidity of the vault, the material is removed.”

We meet a small train loaded with rocks. Then, the doom gets lower, and we must go ahead, bent, in the total darkness. At last, we have arrived: on my knees, I clean, at my best, the 80 mm of my Hasselblad, and my glasses too, as they are completely dimmed by the wet heat, and I photograph a black, small, shining, just a little wider than a centimetre, stripe, which stretches along the rock.

It contains chromium, and it’s sign of the presence of the “Merensky Reef” (after Hans Merensky, discoverer of platinum in South Africa), the point of major concentration of the precious metal.

“It’s like the layer of cream in a cake,” Dr. Cloete comments, and we don’t lose its sight. We dig for about half a metre over, and a metre under the black stripe, and so, slowly, we go more and more down. Here we are at about 400 metres, but in the calculation of our reserves, we might reach the 1.200 metres. There is plenty of platinum, with which to amply satisfy the increasing demand of the 21st century.

When we get out, our overalls are not so much candid as before, and I appreciate very much a tool, in front of the dressing -room, which enables me to take off the boots without bending. A nice shower, and a shake of exotic fruits, growing close to the mine, put us in order.

In the afternoon, I photograph, from an incredible black hill of ferrous residuals, the complex for the first concentration of the metal, and I visit the very modern plants, perfectly inter connected, following the production cycle.

“This is the entrance to the mill”, tells me Dr. Cloete, showing the band which carries, incessantly, to a hangar, the rocks we have seen being collected during the morning, where they go in 21 rotating cylinders, 4.9 metres long, and 4.3 metres wide, which will reduce them in an impalpable whitish powder.

The metallic structures of the building vibrate continuously, and I have difficulties to find a stable position for the easel. In the nearby room, the powder is mixed to the water, added of frothers, and shaken by air streams, which separate the matrix from the ores.

“What derives from the fluctuation,” Dr. Jocelyn Cloete goes on, “is dried up, and in this way we obtain a grey powder to be sent to the blast-furnaces. Iron is skimmed like a scoria, and the other metals remain there, condensed in a black granulate, which contains about 50% of nickel, 28% of copper, and small quantities of platinum, and other precious metals.”

This “granulated matte” goes then to the refinery factories, close to Springs, where, with a very long process, they extract cobalt, nickel, and copper first, then gold, platinum, and palladium, and, finally, small quantities of silver, ruthenium, iridium and rhodium.