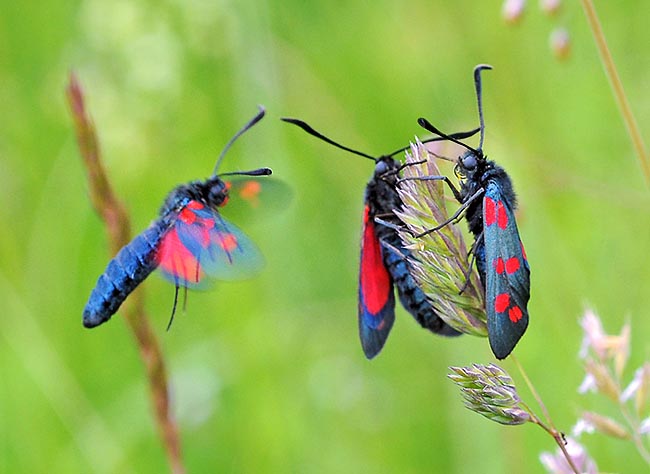 The colorful Zygaena filipendulae (Linnaeus, 1758) belongs to the order of the Lepidoptera and to the family of the Zygaenidae, a group enclosing these particular day-flying moths (Heterocera).

In this family are included about 800 species scattered in different continents, in particular where their ideal habitat is present: a sunny climate, often very arid and with high temperatures.

For the etymology of the scientific name of the genus Zygaena please refer to Zygaena carniolica.

The Latin term “filipendulae” is fruit of an error made by Linnaeus who had identified as host plant of this species the Filipendula vulgaris, commonly called Dropwort, whilst, as we shall see later on, this plant results being an essence on which it loves to spend its life as imago.

Also in this case, a good hint for the recognition of this species is the current name the Brits have given it, describing in the term one characteristic which rends it undoubtedly distinguishable form the quite similar zygaena transalpina. It has been, in fact, commonly called “Six-spot Burnet”, that means Zygaena with six spots. Considering that in the British territory the Zygaena transalpina, a species usually with six spots is absent and having the other species normally five spots only, they can without fail recognize a priori this species. Conversely, it is rather difficult to classify these two zygaenas when their range overlaps.

The Zygaena filipendulae is in absolute the most common species in the range where it lives. It has a vast geographic and altimetric collocation and well adapts in a variety of environments. It lives from the sea level up to the 2000 metres of altitude tending to rarefy progressively at higher altitudes. 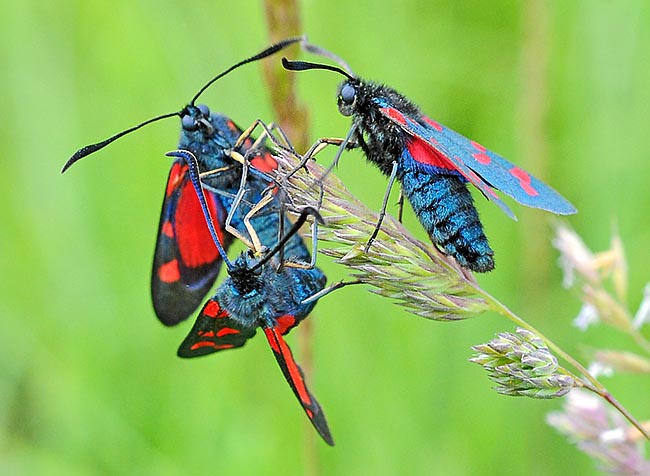 If not on a flower, as here is the case, it’s matter of amorous approaches © Gianfranco Colombo

It is a much diffused species in Europe, including an area going from the Iberian Peninsula up to Lapland and in Central and Southern Europe through Anatolia, Syria and Lebanon up to Caucasus, including the Balkan Peninsula. In Italy it is amply present, being absent only in Sardinia and partially in the extreme appendices of Sicily, Calabria and Puglia.

It loves sunny and grassy areas, with preference for calcareous soils, disdaining, as most zygaenas the woody areas.

In the Mediterranean area it has a strong presence in slightly high hilly zones, with a greater density around the 1000 metres. It is in any case present also at the sea level.

Generally, the Zygaena filipendulae has brown-blackish with bluish reflections wings, with six very bright carmine red spots, colours that, as for any other zygaena, besides rendering it well visible act as warning towards their predators. It is a species not presenting that extreme variability typical of the zygaenas even if various forms and subspecies have been described but no in a number comparable with its other congeners.

Amongst all zygaenas, this species in particular is often one of the most difficult to determine as easily mistakable with the Zygaena transalpina.  The difficulty is then accentuated by the fact that these two species share many of their ranges with a vast overlapping of the different populations.

Some special characteristics of the antennae, the positioning of the spots and their shape are often the only characteristics for an immediate distinction. Please refer to Zygaena transalpina. 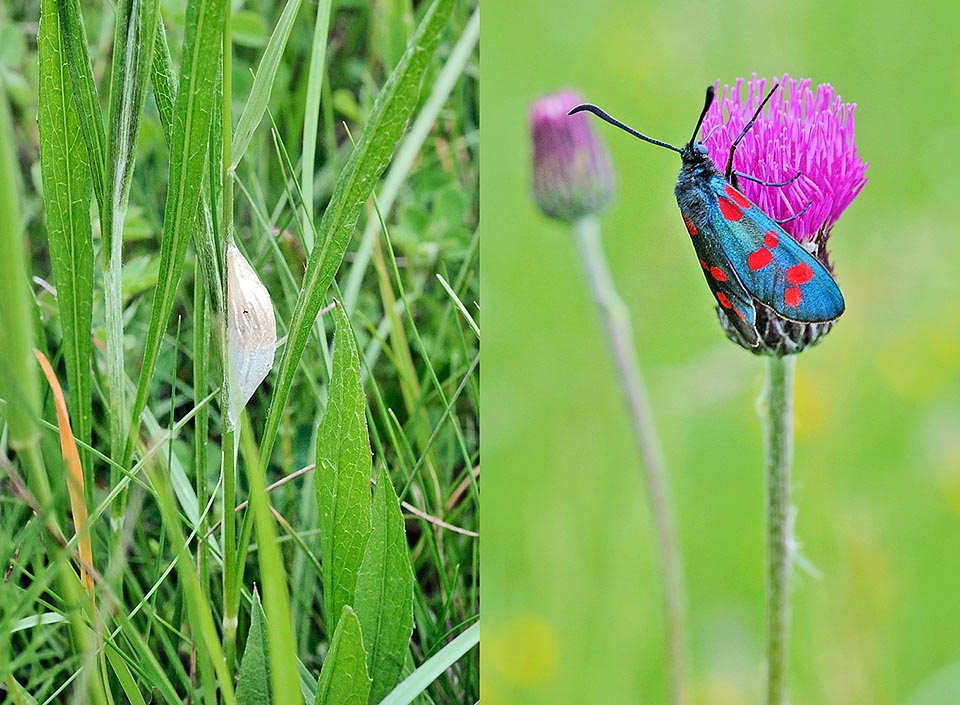 Pupa and imago of Zygaena filipendulae. It’s monovoltine, but has a long fledging period from June to late August © Gianfranco Colombo

The spots 1 and 2 have elongated and parallel shape between them and generally have the same size and are well evidenced. The third one is usually round or roundish and is very close to the fourth which has the shape of a rectangular polygon. Often, they are so close to appear as merged, but with an attentive observation it will be seen the existence of a colourless nervation separating them.

As size, the fifth is the biggest of the spots, with a roundish or squared shape and also this tends to be very close to the sixth, the most reduced, which at times is so much insignificant to appear as almost absent. It can therefore be noted that, contrary to the zygaena transalpina, which has spots neatly distinct among them, the filipendulae has a tendency to get spots often coupled and at times apparently merged.

Another particular stands in the antennae which, in the case of the transalpina are rather thin, with a little accentuated club and with the apex strongly pointed whilst the filipendulae has a highly accentuated and normally pointed club and the pedicel of the antenna enlarging progressively from the base. 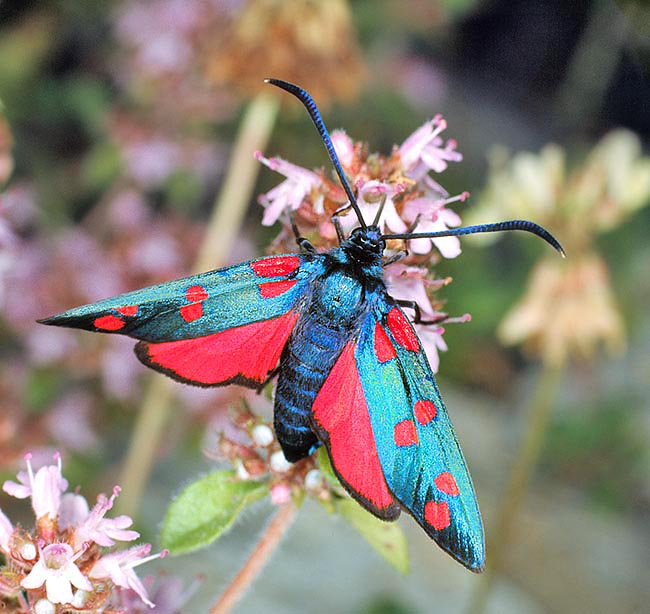 Difference between Z. filipendulae and Z. transalpina is small and needs big attention when classifying © Mazza

Also in the filipendulae is present in the subspecies stephensi, a f. flava where the red colour is totally replaced by the yellow.

This zygaena has an average wingspan of 4,5 cm and there is no sexual dimorphism except for a slight difference in the dimensions in favour to the female, however not always detectable on the field. Is present a discreet, but not high, number of subspecies, often referred and nominated after the places of origin.

The Zygaena filipendulae is a monovoltine species but has a period of prolonged fledging from the month of June up to late August.

The larva is green with tendency to yellowish, with linear series of blackish spots on the back and spins the cocoon about twenty days after the birth.

Preferred host plants are the Lotus and Dorycnium not disdaining, however, the Coronilla and the Astragalus. The cocoon is elongated and tapered, white yellowish and of elastic consistency. It has an annual cycle but it is thought it can remain spun even for two years.

Like all zygaenas the adult feeds and gathers with assiduity on the flowers of pincushion, of plumeless thistles and of common sainfoin and as said before, also on the Filipendula vulgaris where it is found in great number together with other species.