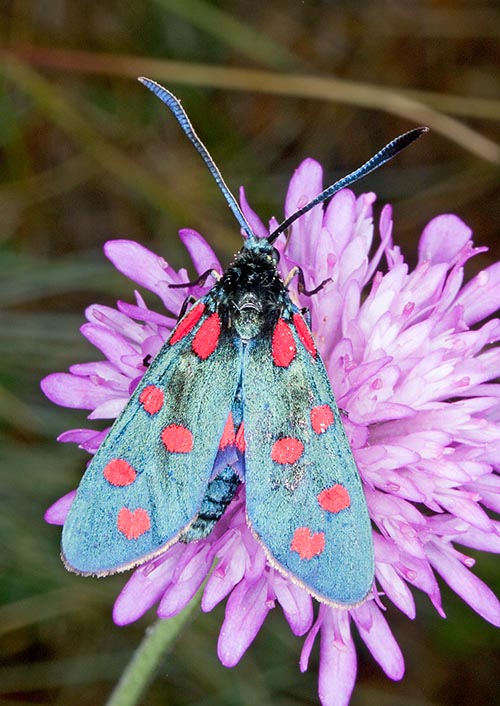 Zygaena transalpina has the red spots with no contour and well detached © G. Mazza

The Zygaena transalpina Esper, 1782 belongs to the order of the Lepidoptera and to the family of the Zygaenidae, a group enclosing these particular diurnal flying moths (Heterocera).

In this family (please see Zygaena carniolica) are included about 800 species scattered in various continents, in particular those where their ideal habitat is present: a sunny climate, often very arid and with high temperatures.

For the etymology of the scientific name of the Zygaena please refer to Zygaena carniolica.

The Latin term “transalpina” is referred to their presence in areas north of the Alps, or, more generally, to indicate that they occupy vast areas of Central Europe.

The Zygaena transalpina is quite diffused in Europe, from the Iberian Peninsula to Central and Eastern Europe and up to the Black Sea, including the Balkan Peninsula. It has a fairly localized presence but with very numerous and diffused colonies. In Italy, it is amply present even if is almost absent in Sicily. Conversely, it is absent in the North European areas (England, Scandinavian Peninsula).

It loves moderately warm zones, well sunny and grassy, choosing preferably calcareous soils and, like most zygaenae, disdaining the thickly wooded areas. In the Mediterranean area it is very common at altitudes close to and over the 1000 metres even if it frequently lives also in costal locations.

Thz transalpina is usually carmine red and like any other zygaena evidences these very lively colours which, besides rendering it well visible, act as warning towards their predators. Their body contains, in fact, traces of cyanide and when attacked they often pretend to be dead and emit from the intersegmental membranes of the abdomen, a yellowish repellent liquid which renders them inedible, disgusting and toxic for whatever sort of enemy. 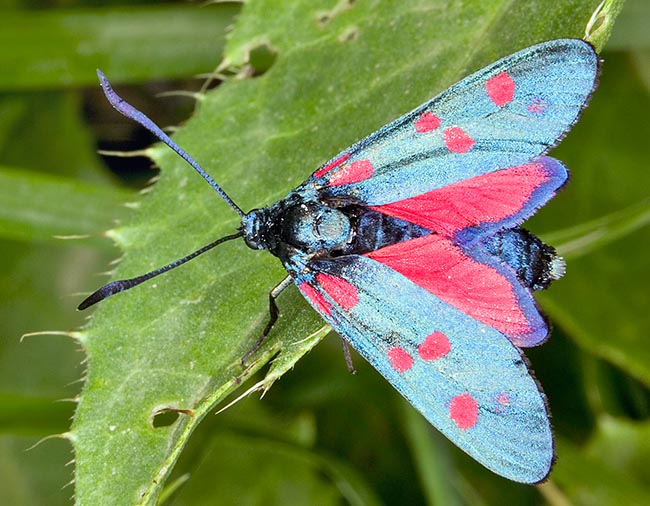 Also their tissues emit cyanide when crushed. The zygaenae themselves are resistant to this as their caterpillars often nourish of plants containing this toxic element.

In this context, the entomologists know well the difficulty in immobilizing them with their cyanide vials during the seizing, as the zygaenae result fairly insensitive to this poison.

The odour of the liquid emitted by them is particular and for some it results pleasantly sweetish and perfumed.

Among the zygaenae, this species is maybe the most difficult to determine as it is easily mistakable with the Zygaena filipendulae.

Moreover, the difficulty is accentuated by the fact that these two species share the same home ranges with vast overlapping of the different populations.

The forewings are black with bright bluish/greenish reflections and with six or at times in localized forms, five carmine red spots without any contour. The spots 1 and 2 are elongated and parallel whilst the third one is clearly rounded. The others are usually rounded or slightly elongated but the sixth which is always irregularly shaped.

All spots are well separated and distinct among them and this is the main particularity rendering it distinguishable from the filipendulae which, on the contrary, has them often coupled and at times merged. Another small particular are the antennae which, in the case of the transalpina are rather thin, with a little accentuated club and with the apex strongly pointed whilst the filipendulae has the club strongly accentuated and normally pointed and the stem of the antenna enlarging progressively from the base.

The rear wings are totally red on both surfaces and contoured by a lower black/bluish edge poorly defined and irregular. 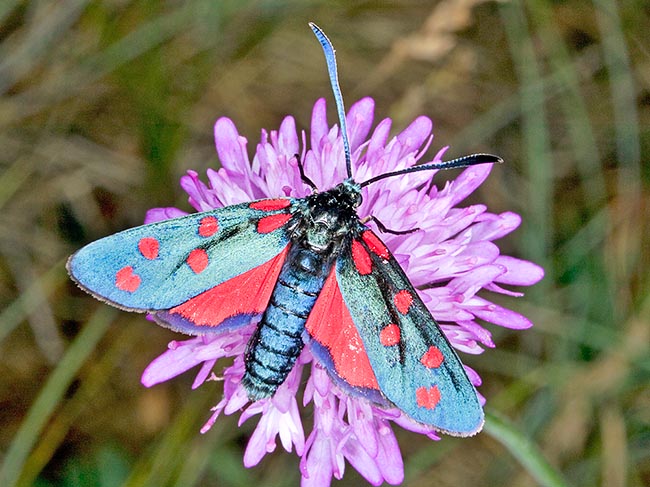 Common in Europe, has long flying out period with continuous eclosions from April to autumn © Giuseppe Mazza

In Italy, the Zygaena transalpina frequently appears in the form flava with vast colonies well localized which often have a population predominating on the red traditional form itself. In the flava the red colour is totally replaced by yellow.

Some zones have a prominence of individuals with only five well distinct spots and with the sixth extremely reduced or totally absent. It is a form often subject to forms of marked melanism, in the yellow form as well as in the red one.

This zygaena has a 4,5 cm wingspan and there is no dimorphism between the sexes apart a slight difference in the size in favour of the female, though not always detectable on the field.

An important number of subspecies is present, often referred and nominated depending on the origin locations.

The Zygaena transalpina is a monovoltine species but has a very long flying away period with the first eclosions already in the month of April and often lasting up late autumn. It has as host plants Lotus, Coronilla and Astragalus.

The larva is pale green tending to yellowish, with two series of blackish dots on the back and spin the cocoon after about fifteen/twenty days from the birth. The cocoon is elongated, keel shaped, of yellowish white colour and of elastic consistency. It has annual cycle but it is thought that may spin the cocoon even for two years. Like all zygaenae, the adult feeds and gathers with assiduity on the flowers of Pincushion flowers, of Thistle and of Sainfoins where it is found in great number together with other species.