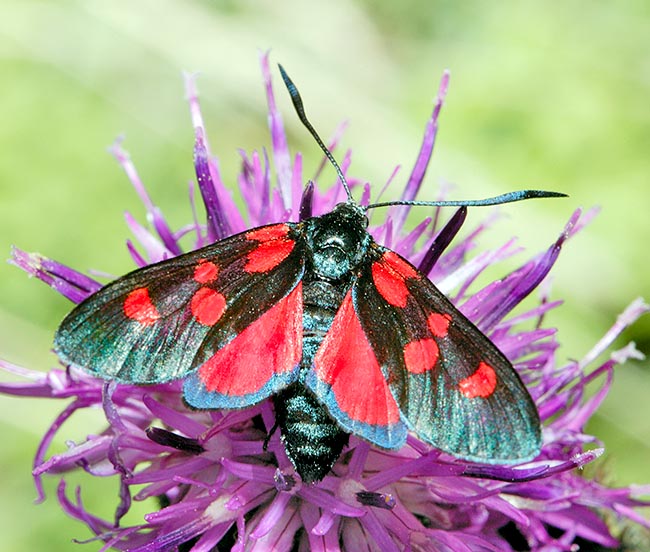 Zygaena lonicerae is one of the commonest European zygaenae. The lively colours warn venom presence © Mazza

The Zygaena lonicerae Scheven, 1777 belongs to the order of the Lepidoptera and to the family of the Zygaenidae, a group that includes these particular moths (Heterocera) with their typically diurnal flight.

In this family (please see Zygaena carniolica) are included about 800 species scattered in different continents in particular where their ideal habitat is present: sunny climate, often very arid and with high temperatures.

For the ethymology of the genus Zygaena also, please refer to the text of the Zygaena carniolica.

The Latin term “lonicerae” = of the lonicera, is referred to the genus of plants Lonicera (Honeysuckle and Woodbine), essences erroneously at that time considered by Scheven as nurses of this moth.

The common English name of this zygaena is Narrow-bordered Five-spot Burnet thus identifying that it belongs to the zygaenae equipped with 5 red spots on the fore wings.

The Zygaena lonicerae is very much diffused in Europe, from the Iberian Peninsula up to Central Europe and to the Urals and then in Central Asia up to China. From the northern side of the Mediterranean up to Caucasus and Asia Minor. It is present also in the Scandinavian Peninsula, in Great Britain and in Ireland. In Italy it is widely diffused everywhere but the Apulia and the southernmost part of Sicily where it appears to be rather occasional.

It is one of the most diffused zygaenae in the European continent.

It loves moderately warm zones, well sunny and grassy; choosing indifferently calcareous or acidic soils and unlike many conspecifics prefers the most wooded locations. In the Mediterranean area is very common at altitudes over the 5/600 metres preferring the sunny subalpine valleys. 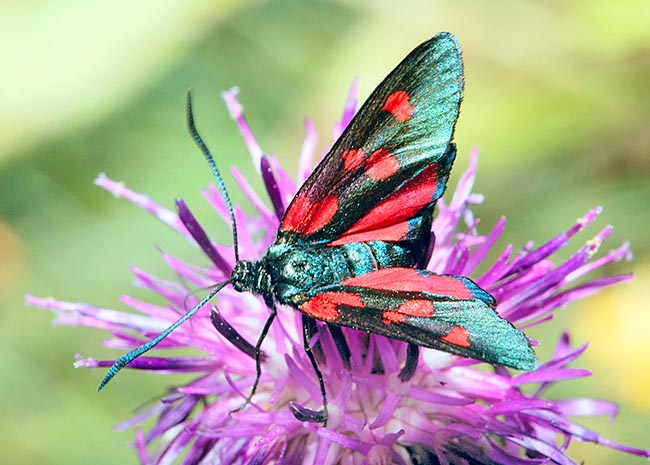 Is characterized, but it is not the only one, by 5 red spots on the wings © Giuseppe Mazza

The Zygaena lonicerae is bright red and like any other zygaena evidences these very lively colours that, besides rendering it well visible, serve as warning towards their predators (please see Zygaena transalpina).

The forewings are of a black-bluish colour very pronounced of green-bluish with strong bright reflections, marked by five crimson red spots, without any contour and neatly separated each other. The spots 1 and 2 are elongated and parallel, whilst the third one is markedly smaller than all others and not rounded but typically triangular or oblong.

The rear wings are totally red on both surfaces and edged by a lower margin black/bluish, wide and well defined.

This zygaena has an average wingspan of 4/4,5 cm and there is no dimorphism between the sexes apart a slight difference in the size in favour to the female, however not always detectable on the field. The female often has the body more hairy and bigger than the male. It has robust, filiform and well clavate black antennae and pointed at the apex. It is present in a remarkable number of subspecies often referred and nominated after the origin places. In the only British Isles, they have identified the ssp. latomarginata Tutt,1899, the jocelynae Tremewan, 1962 and the insularis Tremewan, 1960.

The Zygaena lonicerae may be mistaken with the Zygaena trifolii (also this one furnished with five spots) or with Zygaena filipendulae and Zygaena transalpina (in the five spots forms) even if the drawings, the shapes and the positions of the red spots placed on the forewings show clear distinctive characteristics. Moreover, the red colour of the lonicerae is by sure the most pinkish among all the “reds” of the similar zygaenae. 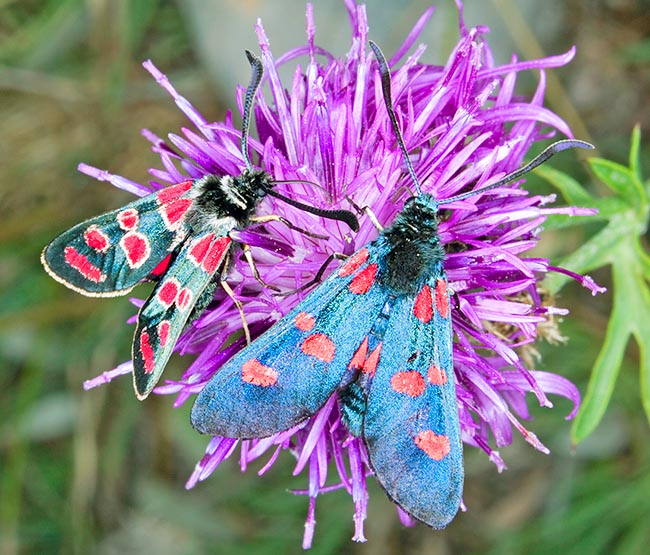 Colours depend also on the light inclination. Left, a Zygaena carniolica © Giuseppe Mazza

The Zygaena lonicerae is a monovoltine species and has a flight period varying after the latitudes, from the month of May to September. As host plants, it has the Trifolium, the Lathyrus, the Vicia and the Lotus where the caterpillar may even spend two seasons in hibernation, in favourable periods, also at the larval stage and completing the growth during the following year.

The larva is of pale green colour tending to bluish, with three series of blackish dots on the back and on the sides, spaced by other ones, bigger, and is furnished of a very fine whitish down. In the favourable climates, they pupate about twenty days after the birth.

The cocoon is elongated and spindle-shaped, of yellowish white colour and of elastic consistency, and is hanging on grassy stems. Like all zygaenae the adult feeds and gathers assiduously on the flowers of Scabiosa, of Knautia, of Cirsium and of Carduus with an ascertained preference to the flowers of light bluish colour.