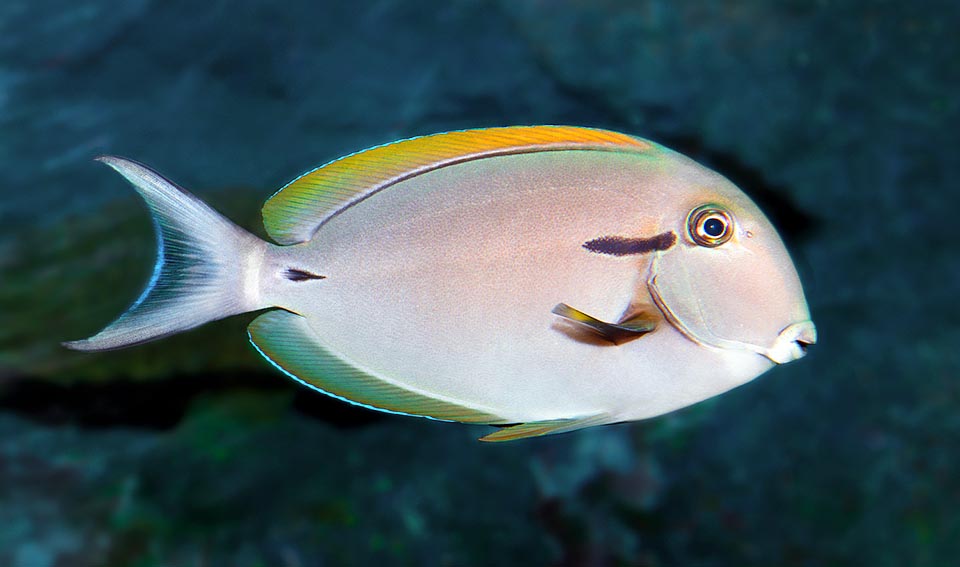 The Blackstreak surgeonfish or Epaulette surgeonfish (Acanthurus nigricauda Duncker & Mohr, 1929), belongs to the class Actinopterygii, the ray-finned fishes, to the order of the Perciformes and to the family Acanthuridae.

The name of the genus Acanthurus comes from the Greek “akantha”, thorn, and “ura” = tail, due to the retractile spine, sharp as a razor, these fishes have on the two sides of the caudal peduncle.

The name of the species nigricauda , simply means, in Latin, “with the black tail”. 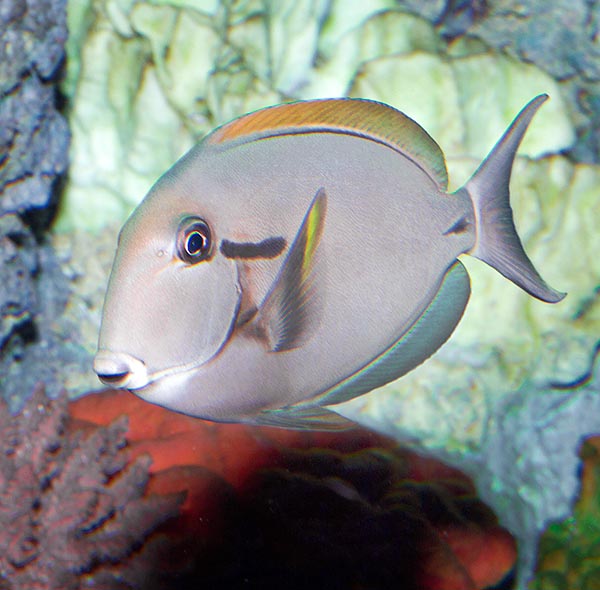 It has an incredibly vast distribution in the tropical Indo-Pacific. Starting from the eastern coast of Africa in fact reaches, eastwards, the Marquesas and Pitcairn Islands. Northwards, it has colonized the coasts of Korea and Japan and southwards the Fiji Islands and New Caledonia.

It lives in shallow waters, usually between the 2 and 15 m of depth, but also in 1 m of water and more rarely has been sighted by around the 30 m. More than the corals, it frequents the sandy bottoms surrounding them: bays and lagoons, without forgetting the more or less murky brakish waters at the mouth of the rivers.

It can be 40 cm long with a flat and oval body. The jaws of the adults have 19 small teeth above and 22 below.

The colour of the body, uniformly brown, at times dark, is quite variable: in fact it can transform instantly, depending on the mimetic exigencies and on the mood of the fish, in greyish pale blu. However, we note in the livery some stable details typical to the species. Firstly, the horizontal black trait, immediately behind the eye starting from the gill opening, interpreted in the vulgar names as a “military epaulet”, a sort of army degree as happens for the Acanthurus tennentii.

Then we have on the caudal peduncle another horizontal black trait, slightly bordered of white (the same ruse used by the painters of old Greece and nowadays by Photoshop to get sharpness) to highlight the sharp cutting blade, the chracteristic weapon of the surgeonfishes, reminder and warning for the intruders, man included. Then follows, like in various Acanthurus, a vertical white band before the dark tail, as the specific name avers. In order to give a touch of beauty this one ends with a light blue hem, as well as the yellow-orange dorsal fin and the blue-greenish ventral one. 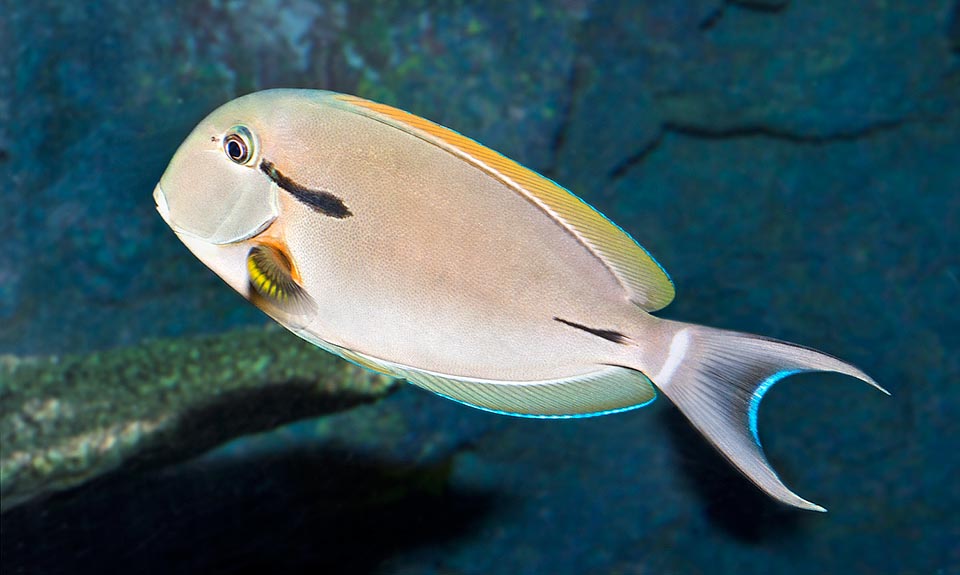 It lives in shallow waters on sandy bottoms of bays, lagoons and estuaries, eating sediments and organic debris an also algae and benthonic invertebrates © G. Mazza

The Acanthurus nigricauda swims solitary or in small schools nourishing of plankton, sediments, organic debris and algae that often swallows with the sand on which they grow up. It does not disdain the benthonic flora and fauna, often poisonous, so much that in certain locations the consumption of its flesh may reveal dangerous.

The reproduction, complete with nuptial livery for the males, takes place at times in schools, as it has been observed along the Australian Great Barrier Reef. The fecundated eggs are entrusted to the currents and the larvae develop in open sea.

In the Marshall Islands they have found hybrids of Acanthurus nigricauda with Acanthurus olivaceus. 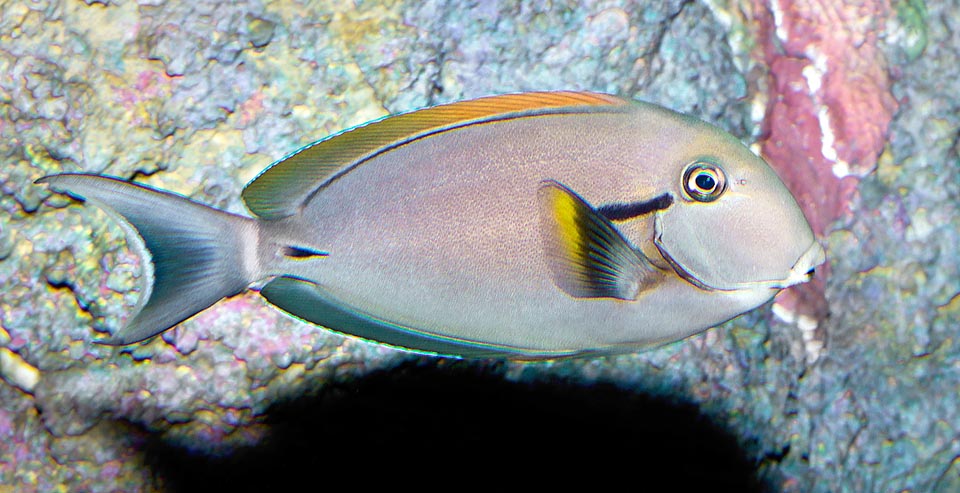 It reaches the 40 cm and is locally caught for food, though its flesh can cause serious poisonings. The populations are stable and is not an endangered species © G. Mazza

Though locally fished, seen the size, in spite of the risk of poisonings, due to the enormous diffusion of the species and its exceptional resilience with possible doublings of the populations in less than 15 months, the Acanthurus nigricauda is not presently an endangered species, with a vulnerability index of 25 on a scale of 100.