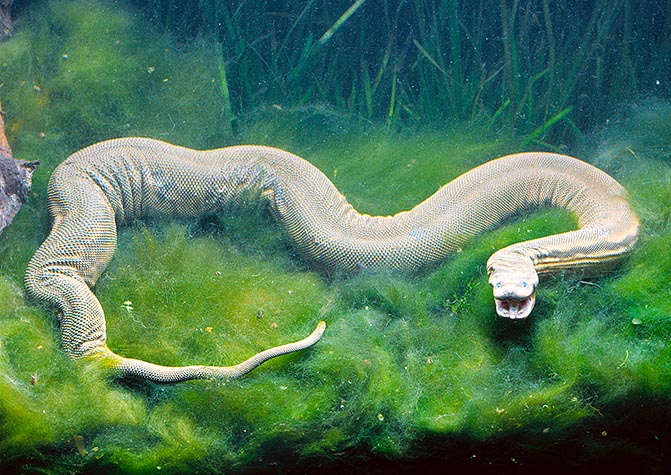 Acrochordids (Acrochordidae) are a genus of serpents which includes species of dimensions going from the 60 cm to more than 250 cm, diffused in Asia (India and Indochina), Indonesia and Australia.

They are reptilians having an often odd look, with presence of cutaneous tubercles, so to deserve the epithet of “file snakes” (they are not to be mistaken, however, with some African ophidians, also called file-snakes, not so much for the roughness of the skin surface, but for the section of their body, shaped like a triangle, which rightly recalls a type of file) and in some instances with a skin having a decidedly “gummy” look.

The body of these reptilians is usually squat, with the skin not resembling to that of most of the other serpents, but which appears loose, so much to pleat in showy folds, so that another picturesque and evocative nickname is that of “trunk snakes”. In some species highly connected with the aquatic environment, this skin is very thin and often delicate, and, in the species Acrochordus granulatus, it easily tears off if the animal is obliged to creep on the dry land, unless this is a muddy and soft substratum.

The Java acrochordid (Acrochordus javanicus Hornstedt, 1787) is a particularly massive aquatic reptilian, up to even two metres and a half long (size reached only by the females, as the males are smaller) and with a weight from 3 to 10 and more kilos, the diameter of the robust and muscled body is remarkable, the head is flattened and depressed, wide and with pug-nosed snout and with obtuse apex.

Being an aquatic species, the nostrils are placed on the upper surface of the snout, the opening of the mouth is remarkable, and is armed with sharp teeth and turned a little back, suitable for holding evasive and slippery preys, such as fishes and batrachians, which are swallowed entire, starting from the head. 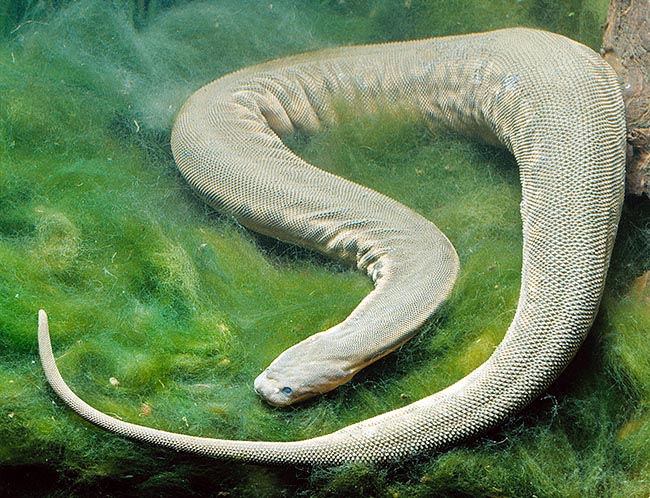 The thin tail is often used to attract the preys. The body seems a trunk © Giuseppe Mazza

Bigger preys may be killed by constriction, but this serpent is not provided with venom apparatus, even if the bite of a medium or big-sized specimen may result surely unpleasant and can leave painful and slow to heal wounds.

The eyes are quite small and little visible form far away, so that, prima facie, it can give the impression to be without them. The colour of the dorsal part can be more or less tense brown or tending greenish, whilst the sides are paler and often yellow, but there are specimens with cream back and others so much clear to be mistaken, erroneously, for albinos.

The head, that makes it vaguely look like some boas, is little distinguished from the body, whilst the tail can be distinguished and is very mobile (some refer a possible utilization of it as bait for attracting a prey close to the …mouth).

The appearance of the skin is loose and gooey, so that in the points where it forms a turn or a spire, it raises in wrinkles and transversal folds (trunk snake), the scales, if closely observed, appear adjacent each other and do not overlap as in the other serpents, and have a rough look, as each one shows a pointed and triangular protuberance, whence the nickname of file-snake, but another clearly peculiar characteristic is the fact that the ventral scales, unlike what happens in the other serpents, where they are wide and evident, are identical to the dorsal ones, giving the reptilian the look of a big sausage, or of a disproportionate snake toy, one of those once used for the carnival jokes.

Its skin, amongst other things, is sought for leatherworkings, and the items done with it resemble vaguely to shark skin, but with an incredible fineness and softness, whilst the flesh is considered as a real delicacy by some populations of its distribution area, which includes India, Sri Lanka, Indonesian archipelagos, Java and part of Australia. 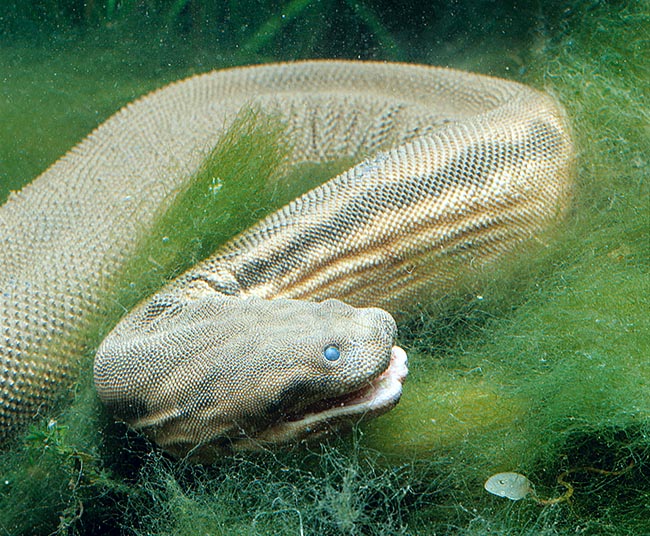 The choice habitat is the freshwaters, but it often colonizes also mixed waters, where the salty ones mix with the fresh ones, the lagoons, and, sometimes, the mangroves forests. It ventures also into the sea and it has been sighted at some distance from the coast, even if this is not by sure the rule, as it clearly prefers the coastal zones.

It essentially predates aquatic animals, fishes and batrachians, but it is not excluded that also warm-blooded animals can become part of its diet, when they venture in water or in its immediate proximity, and the teeth, pointed and hooked, are able to hold slippery preys with ease.

Even if not aggressive, it does not hesitate in biting enthusiastically, if we try to catch it or if we disturb it, and, as I said before, in the bigger specimens the consequences may reveal an unpleasant souvenir.

It is a serpent with mainly crepuscular and nocturne habits, which spends the hours of the day hiding and away from predators, but, in some occasions, it has been seen while hunting during the day. It rarely ventures in the mainland, and usually prefers to take advantage from muddy soils when it does so, as its skin is not suitable for the locomotion on the soil and is relatively subject to bruises and wounds, especially when too dry. It may remain underwater even for 30 or 40 minutes without need to breathe, and when it needs to store oxygen it is sufficient to surface the summit of the head, where the nostrils do open, and 15-20 seconds are sufficient for refuelling in view of another long immersion.

The reproduction is ovoviviparous and the female which, we remind, is bigger than the male, delivers 15 to 30 kids, alive and self-sufficient. The eggs have an amniotic sac and are held in the oviduct where they get the fecundation.

The newborns are semi-terricolous, unlike the adults, and have often some longitudinal spots on the uniform livery, which fade and disappear with the increase of the age.