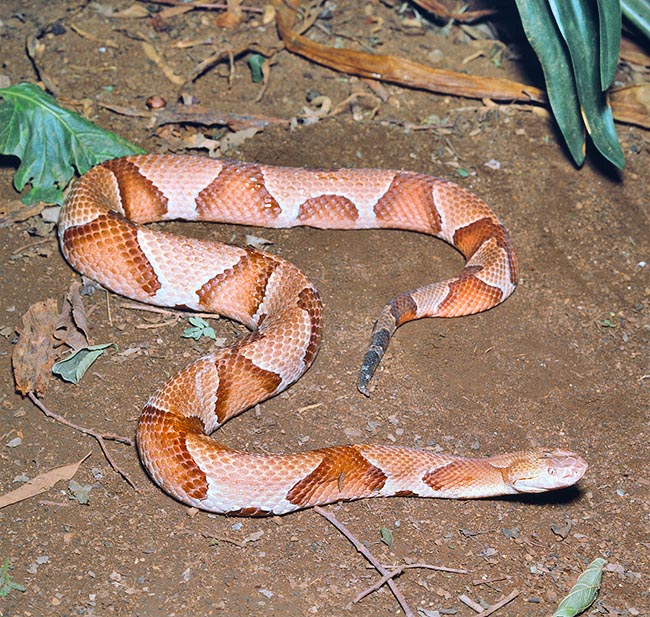 American Copperhead (Agkistrodon contortrix Linnaeus, 1766) is a viperid (Viperidae) afferent to the subfamily of crotalines (Crotalinae).

It belongs to the so-called “moccasins”, or better, “moccasin” (please see text of Agkistrodon piscivorus), probably, once, involuntary suppliers of hides for making the famous American Indians footwear.

The addition of the “American” adjective is compulsory, in order not to create confusion with the Australian Lowland copperheads (Austrelaps superbus), venomous serpents belonging to the elapids, with fixed fangs, whilst those of the copperheads are foldable. The Americans, colloquially, distinguish the Water moccasins (Agkistrodon piscivorus) and the Copperheads or Highland moccasins (Agkistrodon contortrix) serpents with much less aquatic habits.

But these “vulgar” names should be, perhaps, avoided, as many uninitiated do call water moccasins also other non venomous aquatic species belonging to the genus Nerodia, and this confusion “on the field” might lead to unpleasant consequences, especially for those wanting to seize them.

Depending on the region where it lives, the Agkistrodon contortrix has five subspecies.

The Northern copperhead (Agkistrodon contortrix mokasen) which has chestnut coloured spots, wide on the sides and narrow dorsally.

The Southern copperhead (Agkistrodon contortrix contortrix): it has a background colour often fairly pale and the dark spots are hourglass shaped.

The Missouri copperhead or Osage copperhead (Agkistrodon contortrix phaeogaster): much similar to the Northern but with black spots creating a more evident contrast, because the background colour is usually paler.

The Broad-banded copperhead (Agkistrodon contortrix laticinctus):): usually shorter than the previous ones (75 cm), is often the most “coppery” among them, with a golden background colour and pale brown dark bands, wider than the light ones.

The Trans-Pecos copperhead (Agkistrodon contortrix pictigaster): it looks quite a lot to the “broad-banded”, for the size (75 cm), as well as for the fact that it has wide bands, which, however, do have a paler “core” inside. The ventral part, as the scientific names avers, and unlike most serpents, is dark. 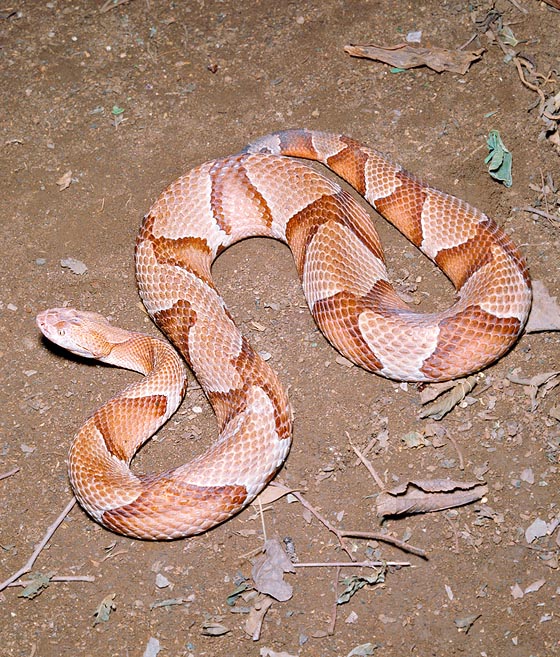 These serpents are endowed, like the most known “rattlers”, which appear in thousands of movies and western novels, of thermo-receptor dimples, utilized for localizing the prey also in the darkness or if it is motionless, but they are missing of that particular cutaneous appurtenance called rattle, even if they maintain the habit of vibrating quickly the tail when an intruder approaches, at times hitting t against the vegetation, like a threatening warning sound. These reptilians do have slightly keeled scales covering the body, and the anal ones are single, and not doubled, as it happens in other species, and have a medium length, between the 50 and the 90 cm even 130 cm reports do exist.

The Copperheads, called in this way due to their colouration, are spread in the south-eastern states of USA, and nourish manly of mice and other rodents, though their diet may be quite more varied, including other small mammals, batrachians (even if being more terrestrial reptilians than the aquatic moccasins, also the copperheads like the closeness of the water and the swampy grounds), lizards, other serpents and even insects.

All subspecies have a background colouration going from the beige to the brick-red, from the sienna colour to the brown, more or less dark, obviously passing through the typical copper colour and some specimens have a colour standing half way between the grey and the “salmon”: on this background stand out darker striae or band, of various thickness and size, depending on the subspecies.

The head, whose upper part is of copper colour, as the name suggests, especially in the “northern” and “broad-banded” species, is triangular and distinguishable from the neck, the eye has a vertical elliptic pupil, and this suggests crepuscular and nocturnal habits, even if it is not unusual to see these serpents active during the day. The thermo receptor dimples are placed between the eye and the nostril, in a slightly lower position than the line connecting the two above mentioned organs, the tongue is usually pink or pale orange, with the two tips usually white or, in any case, of clear colour. The body is relatively thick, without being stubby like in some vipers; the tail is thin and at times is distinguishable from the rest of the body. They are rather long-lived reptilians, with an average lifespan, “in the wild”, of 18-20 years and reach the sexual maturity by around the two or three years of age, when their length is 60 cm long as an average. The coupling period is, in some regions, double, from August to October and from February to March, especially in the warmer zones.

Interesting is the reproductive strategy: the females mating in October, when the cold period begins, may “store” the sperm of the male till when they emerge from the hibernating period, in spring; studies have shown that the period of time when the sperm keeps vital varies depending as to where it is “stored”: if it is in the cloaca (the common duct of the excretory canal with the genital one, like in the birds), the duration is limited and there may be a “reproductive failure”, if, on the contrary, the sperm has gone up to the oviduct, where a specialized and highly vascularised tissue, the conservation is much longer and the gestation period varies from the 3 to the 9 months.

The copperheads are ovoviviparous and give birth from three to twelve young, about 20 cm long and already equipped with an efficient venomous system. The ovoviviparous reproductive system works in quiet a different way from that of the mammals: the egg contains a remarkable quantity of “albumen” which nourishes the embryo, as there is no placenta, and is lodged at the end of the reproductive duct. The hatching takes place inside the body of the mother, immediately before the young is “delivered” and this last, at the moment of the birth, is still enveloped in a sort of amniotic liquid. 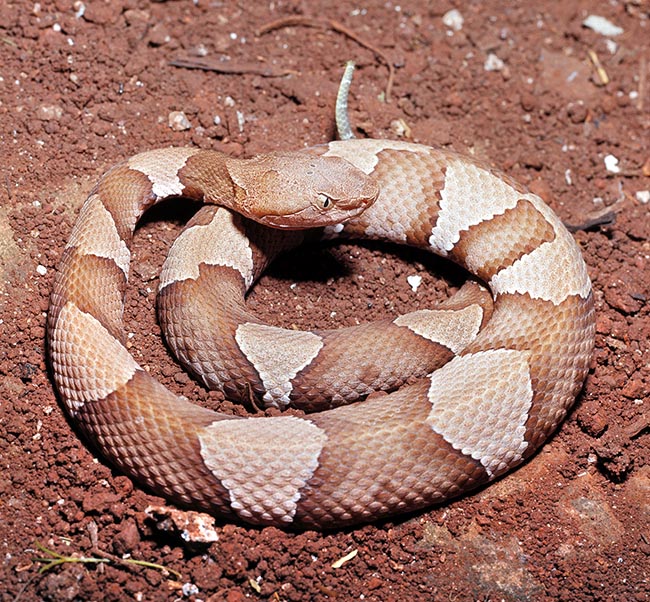 The tail is up, but the "warning" for the intruders is a sudden bite, usually not fatal for men © Giuseppe Mazza

The copperheads colonize various habitats, from the hilly zones, wooded and with presence of rocks, to the plain, often close to ponds or waterways, but also semi-swampy grounds are appreciated. They willingly shelter in the cavities of trunks, under stacks of wood or piles of branches, and even into the piles of sawdust, close to the sawmills or to where the trunks are worked, furthermore, the “winter” often in company of numerous other specimens.

The venom of these reptilians rarely is fatal, but it can cause extended necroses and may be very painful, but the copperheads stand amongst the serpents which bit more persons, especially in North Carolina (State which appears to hold the record of serpent’s bites).

In this regard, it is interesting to mention the behaviour of the Agkistrodon contortrix, which differs quite a lot from that of other venomous serpents.

The serpents have particular deterring means for warning an intruder not to walk over them inadvertently.

Acoustic signals: for instance hisses which may be even loud, as is the case of the puff adders and the Gabon vipers, a hissing crackling obtained by rubbing the keeled scales, with the coils developing in a continuous and hypnotic 8 (horned vipers, echis, but also the harmless African egg-eating serpents), the noise of the castanets of the real rattlesnakes, and finally the strange roar emitted by the Asian king cobra.

There are then visual warnings: some species increase the diameter of the body or of the neck, filling up the single lung like a balloon, others widen a “hood”, more evident in the cobras, narrower in the black mamba and in many Australian elapids. Others gape exhibiting evident colourations of the mucosa, for instance, the white of the cottonmouth (please see Agkistrodon piscivorus ) or the “pirate black” of the black mamba. Thelotornis and Boomslangs (see texts) swell up the neck in a different way than the cobras, increasing the diameter vertically.

A chromatic warning is typical of venomous species (i.e. coral snakes), but also of harmless species, which imitate the liveries of the venomous ones.

Chemical war: if you seize a ringed snake, probably it will make you a gift, emitting from the cloaca a terribly stinking secretion, so much to induce you to abandon the idea to hold it.

Conversely, the Copperhead uses its own proper system, less diplomatic and more direct; several experiments have been done about this. Simply, the Agkistrodon contortrix warns the annoyer biting him, without any bluffs: if the enemy is close, even without vibrating the tail, it moves suddenly ahead and bites. Often, however, it does not inoculate venom or ejects a modest quantity, because, anyway, it’s matter of a simple warning.