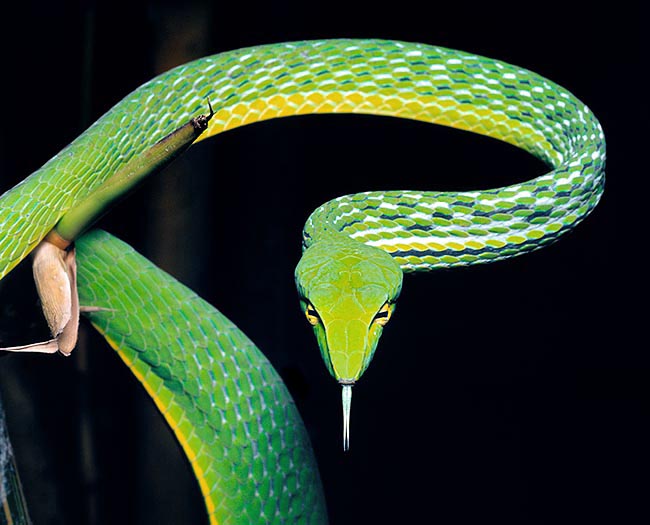 It has a certain resemblance with Ahaetulla nasuta: slender and thin body, tapered head and pointed snout, shaped like an arrowhead, characteristic which has originated (Ahaetulla nasuta) the legend after which these snakes should keep in ambush on low branches, at the height of a man’s face, ready to attack the unaware passer-by.

On the other hand, if we observe the head of this reptilian, especially in front, the impression we might get s that of an evil goblin, accentuated by that acuminate nose and by the eyes with horizontal pupil that, frontally observed, look like two narrow slits with a decidedly … oriental cut.

And when the animal opens wide the mouth in threatening attitude, for scaring a potential aggressor, the effect is by sure impressive, wholly disproportionate to its relative harmlessness. The adjective “relative” has been suggested to my by a simple consideration: the overwhelming majority of the colubrids results being harmless for the man, because good part of them is entirely lacking of venomous apparatus (aglyphous) as well as because also those colubrids equipped with fangs and venomous glands (opisthoglyphous) are, in most cases, endowed of little or not at all dangerous poisons for the human beings, and however, there are some striking exceptions such as the African boomslang and the Twig snake or Vine snake, species nowadays placed amongst those potentially fatal. Even though the Ahaetulla are considered as almost harmless for the man, it is important to precise that many of venoms of the colubrids are little studied, little known and very variable not only from species to species, but even only from zone to zone.

I think, therefore, that it is useful to say a word about some reports referring to this matter, thing that maybe will give the opportunity for some useful reflection also about other ophistoglyphous considered as harmless and often handles carelessly by the lovers and by the herpetologists, even professionals. The Mussurana (Clelia clelia or Boiruna maculata) is a colubrid of Central and South America, well known for being mainly ophiophagous, with a marked preference for the venomous snakes (to whose venom it is immune). 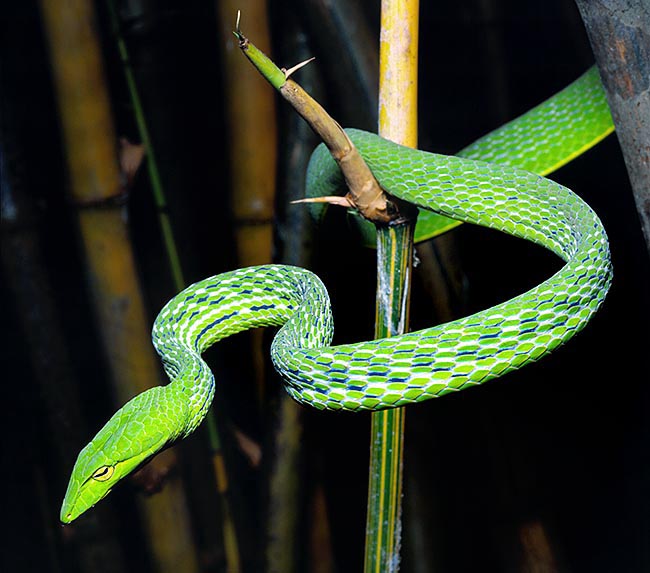 Considered as a docile animal (it rarely bites even when seized), it was also classified as “harmless”, because, even if having an ophisthoglyphous venom apparatus, its venom was considered as not dangerous for the humans. Nevertheless, the episode I quote would suggest the contrary.

In 1997, a child was hospitalized in Porto Alegre, Brazil, after having had an ankle bitten by a Mussurana of the subspecies Boiruna maculata (we remind that there are other subspecies of this snake but the recognition of the reptilian responsible of this was sure and confirmed): the kid was showing evident local signs of poisoning of cytotoxic type, with massive oedema, cyanosis of the limb, symptoms accompanied by strong pain and enlargement of the inguinal lymph nodes.

Even if there were not yet signs of severe general impairment, the age of the patient and the severity of the local symptoms induced the physicians to administer him intravenously, by slow infusion, 200 ml of anti-bothrops serum, which did not only neutralize the haemorrhagines responsible for the bleedings but also the edematogenic action which might have placed in danger the life of the young patient due to the possible hypovolemic shock (pressure drop due to extravasation of plasma into the tissues). Well, after this poisoning and the efficacy demonstrated, in the treatment, of the anti-ophidic serum used normally for contrasting the venom of the dreaded crotalids “lancehead”, further studies about the venom of the mussurana were done and they demonstrated the presence of miotoxins that, compared with those of various Bothrops, did reveal remarkable analogies with them!

Some herpetologists, on the other hand, reported symptoms of slight neurotoxic type also after a bite of Ahaetulla nasuta, therefore it is my personal opinion that the absolute innocuousness of many ophisthoglyphous colubrids is still to be demonstrated. And this might be also the case for the oriental whipsnake.

Going back to Ahaetulla prasina, this is an arboreal snake, with a clear love for areas densely covered by vegetation, whether it is a true and real pluvial forest (of which it prefers the margin and transition zones) as well as plantations, parks or gardens, diffused in an ample part of Asia, from the Indian peninsula to Vietnam, passing through all the southern belt of China, and going to colonize also Indonesia and the Philippines, cohabiting, in determined zones, with Ahaetulla nasuta. 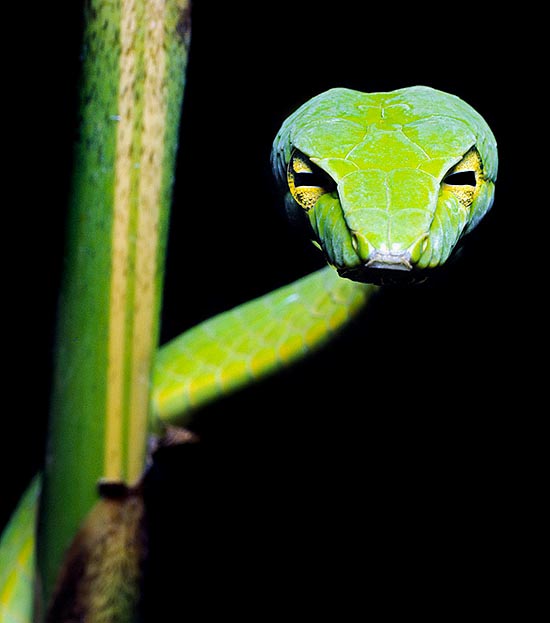 It is a rather common animal, on the contrary, in some areas, like India and Sumatra, it is one of the snakes most commonly sighted, and it is possible, therefore, to find it among the “terrarium” species even if it seems that it adapts to the captivity with difficulty.

The body of this snake is thin and elongated, although if some mature individuals may appear proportionally more robust, with a colour varying from the bright green to the light brown, often with a paler longitudinal line along the sides. In some specimens the green colour can appear fluorescent and, if we observe the skin more closely, we can see that the tonality is not uniform but created by an alternation of small polygons of different colours, formed by the scales: white, green and black. The head is very similar to that of the Ahaetulla nasuta (see text), well distinct from the body, the eyes are relatively big and probably allow a binocular vision, like is the case of the boomslang and of the twig snakes, whereby the predator can, unlike most snakes, distinguish even an immobile prey.

It mainly hunts vertebrates: birds and nestlings, batrachians, lizards, snakes, bats, etc. which are approached with cautious and progressive movements, imitating the waving of the branches moved by the wind, until when the prey is within range of the fast extension of the head, projected forward with the mouth wide open. Probably, in some cases, it hunts also in ambush, relying on its perfect camouflaging, and the venom, injected through the fangs placed rather back on the palate, almost under the eye, acts fairly rapidly on small animals, rendering them harmless and killing them in short time. An odd characteristic of these snakes of diurnal habits, however, is the frequency with which some populations and some specimens in the habitat of a same population prefer a… little different ménage, that is, an arboreal life (with preference for the bushes and the low plants, as is the case of Thelotornis capensis) but utilizing the soil as hunting location: this explains why also frogs and toads very commonly enter their diet, and explains also why they are reptilians frequently sighted (because, when they are staying among the foliage it is very difficult to see them).

The reproduction is ovoviviparous and the newborns are brown, with yellow and black spots, and autonomous immediately after the “birth” and abandoned to themselves by the mother.