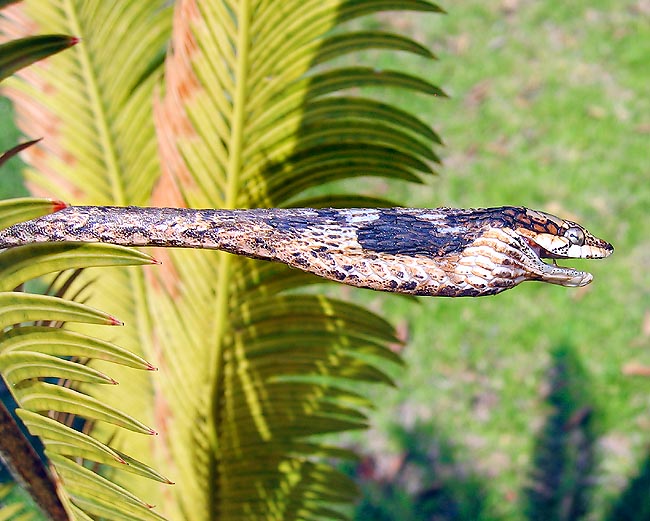 If menaced, the Thelotornis capensis capensis swells the neck by flattening it vertically © Gianni Olivo

One day, I was waiting for a leopard in a “blind” of branches and leaves. The leopard should have surely come by night time, however I am used to enter the hideout by early afternoon, because often the feline approaches the flesh (whatever if it’s its kill or flesh placed there for attracting it) already during the day and remains for long time hidden, controlling the zone. It was 3 pm, there were still three hours to sunset and so I was reading a book, even if, occasionally, I glanced around.

At a certain moment, I raised my eyes and, while I was to take the binoculars, I saw a chameleon (flap-necked) which was staying, motionless, on a branch of my hideout, which I had prepared the day before.

I stood observing it: I wanted to see when it should have seized on of the insects flying in the blind: the infallible shot of the viscous tongue of the chameleon is always an incredible view.

After a few minutes, the small animal, which was placed about half a metre from my nose and looked towards me, suddenly changed of colour.

Just before, I had noticed, amused, how the two sides of the reptilian had different colour: pea green the right part, in the shade, and very dark green the other, exposed to the sun, on which were evident only some candid dots, then, suddenly, all its body began to change to a brown colour scattered of black point, while, at the level of the neck, did appear some parallel yellow striae.

It was an instant, then something sprang, very fast, from top to bottom, and I found myself gazing, aghast, the body of the reptilian which was hanging from its mouth, enormously wide open, a slender reptilian of which it had seized the head.

It was a Twig snake (Thelotornis capensis capensis) – Smith, 1849, , quite common in our reserve, the almost incredible fact was that I had it at less than a half metre since God knows how much time and that I had not noticed it at all.

The Cape twig snake is the first species to be catalogued and studied and it is also the one responsible of the cases of fatal bite by twig-snake.

Slender and graceful colubrid (Colubridae), from 70 to 120 cm long, it is covered by slightly keeled scales, placed mid-body, in 17-19 oblique rows.

The colour is cryptic, with exceptional camouflaging capacities, which render it really similar to a small branch: on the upper side it is, in most cases, ash grey coloured or, in some instances, light brown, with small dark and light dots, scattered on all the livery, and others of orange, yellow, light blue or pink, colour.
The presence of all these colours, far from rendering it an harlequin of the bush, break the contrasts and serve to camouflage it in quite different types of vegetation, from the shining green of the leaves during the rains season, to the rust and red of the Mopani leaves during the dry one, to the silver colour of the silver-leaf and so on.

The top of the head is light blue or light blue-green, with dark speckling and often, on the sides of the head, are evident pink or orange spots. The upper lip is white, often with very numerous black tiny points, whilst a dark (black and reddish) band goes from the apex of the muzzle, through the eye, up to the nape.

One day, my wife, while opening the gate of our reserve, almost touched a twig snake, and it was only the bright red tongue of the reptilian, utilized as warning, to alarm her: in fact, the tongue is canary yellow or red, with black points and is vertically darted when the reptilian, motionless, wants to inform about its presence.

The head is arrowhead shaped, like that of the Forest twig snake (see text Thelotornis kirtlandii), with big eyes with horizontal pupil and shaped like a keyhole, and, like forest the forest subspecies, a horizontal groove going from the yes to the apex of the muzzle, allows the binocular vision which permits it to distinguish also motionless preys, like the chameleons.

This species, typical of the savannah, arid as well as humid and wooded, is not present, in reality, in the Cape zone, but in a coastal belt including the Wild Coast in South Africa, the Kwa-Zulu-Natal, the Mpumalanga, all the zone of the Limpopo, the southern Zimbabwe and the eastern part of the Botswana.

A northern subspecies, the Oates’ savannah vine snake (Thelotornis capensis oatesii) is, on the contrary, present in a horizontal belt extending, from West to East, from southern Angola and the northern Namibia, through the Caprivi Strip, to northern Botswana and the central and northern part of Zimbabwe, up to central Mozambique, and an eastern subspecies (Thelotornis mossambicanus) is present in the central and northern Mozambique, along the Nyassa Lake and probably also in Malawi.

Going back to the subspecies capensis capensis, it is a chiefly arboreal serpent, which loves the bushes and the branches of the not too high plants, but which can come down to the soil, where it moves with grace and agility, especially for displacing from a shrub to another, it also swims well (in one instance, I saw one of them crossing a large puddle of water). It looks especially for arboreal lizards (chameleons, agamas, geckos, etc.), but hunts also birds and nestlings, small snakes, batrachians, tree frogs and small mammals.

It is diurnal and may keep motionless for hours waiting to locate a prey, to which it can go close with small steps, waving like a branch moved by the breeze, until it is close for shooting.

If menaced, it swells the fore part of the body and of the neck, flattening the same vertically, and if it decides to bite it holds the grip and chews for long time, thus allowing the venom to drain into the injury.

The venom, secreted in modest quantities, is however extremely powerful and causes bleeding.

The symptoms may appear also 24 hours after the bite or even later, but the effects are potentially fatal, due to the imposing haemorrhages both cutaneous and mucosal as well as internal.

A specific serum does not exist and neither the monovalent vaccine for the boomslang bites, nor the polyvalent are effective. In case of poisoning, the victim will have to be treated with blood transfusions and supporting therapy till when the effects of the venom disappear.