As it had happened for the Boomslang (see text of Dispholidus typus ), the twig snake, of which, time ago, only the southern species was known (see text Thelotornis capensis capensis), being a colubrid (Colubridae), it was considered as harmless.

Later on, some cases of bite of which were victims even famous herpetologists, bites overlooked just because of the wrong conviction that the venom of all colubrids was harmless for the man, revealed that some of them hold lethal venoms and, moreover, fatal in very low dosages. Among the most famous victims, we recall Karl Schmidt, of the Natural History Museum of Chicago, killed in 1957 by a boomslang, and Robert Mertens other known German herpetologist, who died in 1975, just for the bite of a Twig snake, not the species we are talking of, but a savannah subspecies.

It is known that about the 25% of the colubrids are venomous, but it was always thought that their venom was effective only on small preys. Excluding the now known cases of boomslang, and of the African twig snakes, few are the reports showing the dangerousness of other colubers, however I am convinced that in the future we shall get proofs of the potential lethality of other species. In fact, while writing my book “Serpenti velenosi e grandi costrittori” (Venomous serpents and big constrictors), I have inserted some witnesses of case of serious poisoning also in other parts of the world, for instance in South America, done by colubrids, such as the Green corridor snake (Philodryas olfersii), which seems to be the cause of the death of a child, which had unstoppable bleeding, which, as we shall see, would lead us to think to a venom with action similar to that of the twig snakes, or of Elaphomorfus bilineatus or Argentina diadem snake, which almost killed an herpetologist, always due an haemorrhagic syndrome and of others more.

The fact is that most of the venomous colubrids, for scarce aggressiveness or because endowed of an inoculating apparatus which is less perfected than that of the viperids and the elapids, cause more rarely poisonings but I think that a minimum of caution is necessary when handling them and in cataloguing them as harmless. Being opistoglyphous, they have usually the venom fangs placed rather back in the oral cavity and must “chew” for at least one second for allowing the venom to go into the injury, also because the fangs themselves are not perfect injection needles like those of the vipers, rattlesnakes and elapids, and this may create a dangerous feeling of security.

Going back to the Forest twig snake, this is an arboreal colubrid typical of the pluvial forest and present from Sierra Leone and maybe from Guinea along the coastal belt covered by forests bordering the Gulf of Guinea, in Cameroon, in all the Congo Basin, in Gabon and up to the western part of Tanzania, to Uganda and Rwanda. I found one specimen of this west to Bangui, in the Central African Republic, so I think that it is present also in this country, at least in the southern belt.

It is a slender arboreal serpent, with elongated and sharp head, arrowhead shaped, bug eye, with pupil (characteristic of all the twig snakes) resembling to a keyhole, horizontally placed. A characteristic that all the twig snakes share with the boomslang, is the excellent eyesight, of binocular (rare case among the serpents) type, which allows them (unlike most of the serpents which distinguish well only the moving objects) to localize a prey even if motionless. This is of great help when hunting some arboreal lizards and particularly the chameleons, which have the habit to stay motionless for hours. 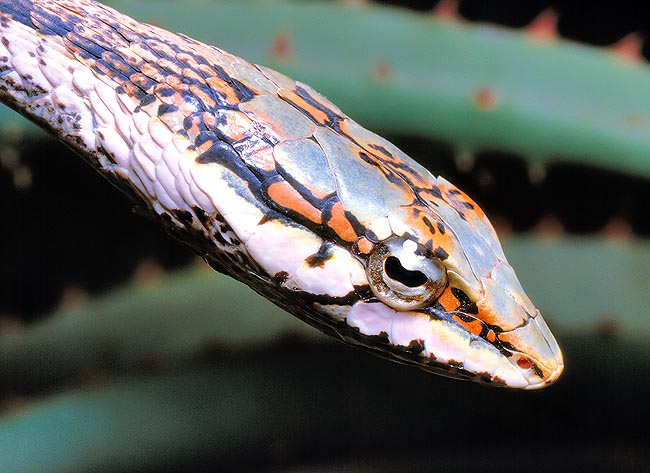 There is in any case a fundamental difference in the anatomical conformation which allows the binocular vision in the twig snakes and in the boomslang; the head of the boomslang is short and the muzzle is blunt, so the two big eyes are placed much ahead and the apex of the muzzle does not hinder much the vision, in the twig snakes, on the contrary, the muzzle is long and sharp and the eye is fairly back, and so, in order to overcome the drawback, there is a sort of groove or “gutter” running from the eye forward, till the apex of the muzzle.

The body is cylindrical, the tail is long and thin, and the scales are slightly keeled and placed, by mid-body, in 19 oblique rows. The average length is of one metre, but it may reach the 160 cm and is, therefore, one of the biggest species; the newborn are about 25 cm long and are extremely thin.

The body is very mimetic, brown or grey, with dark specks, but there may be some variants, furthermore, as for all the animals of the pluvial forest, a poorly known and explored area, also the colouration might reserve some surprises. The belly and the cheeks are pale and the upper part of the head is green, characteristic which distinguishes it quite neatly from the savannah species which can coexist in the most southern part of its distribution range (northern Angola and north-western Zambia).

It is a diurnal reptilian and spends lot of time on the plants, preferring not too high branches (it is not a typical serpent of the “forest canopy”), but it ventures on the ground, where it may develop a remarkable speed. It may keep motionless for long time, and in such case it is difficult to distinguish it from a branch, and like all the twig snakes, it can move the fore part of the body rhythmically with the movements caused by the wind between the braches. The approach to the prey happens slowly or with small shots forward, waving, when the prey itself is inattentive, until the lightning final attack.

If it is approached by a possible danger, while it is motionless, it renders itself visible moving vertically the bifid tongue, which is brightly coloured and serves as warning. If this is not enough; it “swells” the fore part of the body and the neck, mut in a quite different way from other serpents. Whilst the boomslang enlarges this part of the body in a cylindrical form, and other serpents flattening it horizontally (cobra, mamba, Australian tiger serpents), all the twig snakes flatten the same in a vertical way. If it is further disturbed, then it may decide to bite and in this case it will tend to hold the grip and to chew on the affected area for allowing the venom to enter the injury caused by the teeth.

However, often, as other venomous serpents do (for instance, some cobras), it may simply hit with the muzzle the intruder as a warning to leave it in peace, and then finally to really bite if further provoked. Finally, it is a reptilian absolutely not aggressive, and we must really engage ourselves or grasp it for getting bitten. It chiefly hunts chameleons, tree agamids, geckos and other lizards, besides birds and nestlings, but there are reports of predation also on serpents and small mammals.

It usually hunts between the branches, often hitting the prey from the top, but at times it hunts also small rodents while on the ground, usually hitting them from a branch low over the soil. It may be encountered, besides in the forest, also in parks and in gardens of small cities and towns not too far from the forest areas. The reproduction is oviparous (from 4 to 12 eggs with a maximum length of 3 and a half centimetres) and the newborn are 25 cm long.

The venom is little studied, but is similar to that of the savannah species and causes imposing haemorrhages, but with often late onset (this fact may induce easy and wrong optimisms). An effective serum does not exist and the victim is to be treated with supporting therapy and transfusions till when the effect of the venom has finished. In any case, I do not have record of known cases of human poisoning, being the possible cases to be attributed to savannah species.