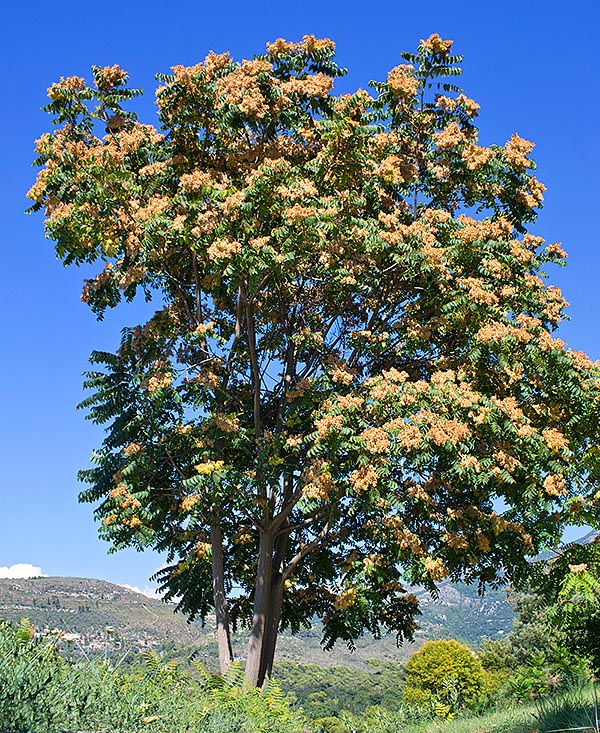 Ailanthus altissima, native to China, was sown in London in 1751 thanks to a Jesuit missionary. Arrived in 1760 in Padua Botanical Garden has become now a fearful weed © Giuseppe Mazza

The genus Ailanthus includes ten species of trees native to the Asian and Australian tropical zones.

The name of the genus comes from an alteration of the Malaysian terms “aylant” or”ayllantol”, which means “tree reaching the sky”, as indicated in the Moluccas. The name of the species altissima is referred to the remarkable height reached in that archipelago.

The Ailanthus (Ailanthus altissima (Mill.) Swingle, 1916), known also as tree of heaven or China-sumac, is a deciduous broad leaf tree with straight and slender stem, long bare when young, with elegant ovate-umbrella like crown in the adult specimens.

The young bark is beige, finely pubescent-glandular, with small lenticels, later in the years turning silvery grey and reticulated, with lighter longitudinal cracks.

The leaves are of alternate-spiralled disposition, imparipinnate, carried by 30-60 cm long rachides (up to 150 cm in the young and vigorous specimens) with developed petiole that after the detachment leaves evident crescent-shaped scars on the branches, with 13-31 (41) segments ovate-lanceolate (2-4 x 5-7 cm), with asymmetrical base and irregularly toothed at the base with unpleasant, fetid odour as well as the bark and the young wood. It is a tree with much delayed foliation: from the third week of May up to the first week of June.

Usually dioecious species with white-greenish 5-7 mm flowers with 5 petals and 10 stamina, carried by panicles of 10-20 cm; the blooming takes on from (May) June to July. The pollination is done by the insects (entomogamous), mainly by the bees that, however, get from them a honey having an unpleasant taste given by the pollen.

The fruit is a samara of 1 x 3-4 cm, membranous, veined, with the shape of a narrow little twisted (helicoidal) lozenge with central ovoid and compressed seed, reddish when close to ripening, pale brown when dry. The dissemination is done by the wind (anemochorous), and often happens in spring as, in most cases, the samaras remain on the trees throughout the winter.

This tree native to eastern Asia (temperate China) was introduced in Europe in 1751 by the Jesuit missionary R.P. d’Incarville, scholar of the Chinese flora who sent the first seeds to the Royal Society of London.

Sequence of branch, in late winter, with growing bud. It’s now very common in central-southern Europe up to 1200 m of altitude © Giuseppe Mazza

In Italy, it was planted in 1760 in the botanical garden of Padua and later on, especially by the mid-nineteenth century, due to the very fast growth, its cultivation was diffused due to some diseases that affected the silkworm, for trying the breeding of the alianthus silkmoth (Samia cynthia or Phylosamia cynthia, ex Bombyx cynthia), great and elegant lepidopteran with brown-greenish or yellow-brownish livery, of the family Saturniidae, whose cocoon is formed by a stronger silk than that produced by the silkworm (Bombyx mori), known as “eri silk” used in the origin countries for producing a fabric called “Kien cen”.

This initiative did not succeed due to the failure to adapt of the new sphingid; on the contrary the ailanthus has very well acclimatized and with the time has become a noxious weed thanks to the very high dissemination and the remarkable vegetative propagation by means of the root sprouts produced in quantity by the long expanded and developed rooting system, especially in the first layers of the soil. 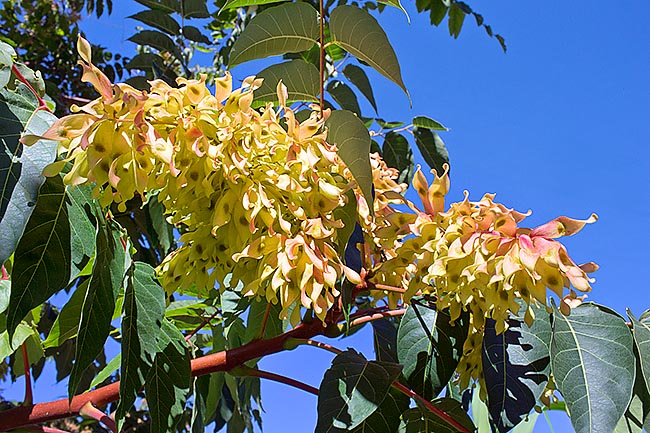 Close-up of branch full of fruits. These are 3-4 cm samaras and contain one seed only © Giuseppe Mazza

It is common in most part of central-southern Europe from the plain up to 800 (1.200) m of altitude, in the uncultivated areas, ruderal areas, walls, old abandoned houses along the roads, the railways and the banks of the water streams, in the degraded broad-leaf trees woods, along the floodplains.

It is a heliophilous species, relatively demanding of humidity; in the arid zones does not reach a great development.

The impact of this neophyte, even more frightening than the Black locust (Robinia pseudoacacia) is quite negative on the landscape and on the artifacts (walls, archaeological sites, pavements, etc.) so much that it has been included in the “black lists” of the allochthonous invasive species of many countries.

Its control with the herbicides has not yielded satisfactory results so far and its containment with manual and mechanical means repeated in the time entails considerable expenses. On Montecristo Island, over the years, it has become so much invasive to replace the natural vegetation (its buds are not eaten by the wild animals and not even by the goats) and various interventions of containment, still now going on, have been done in the attempt of eradicating it from the territory. Also on the forestal point of view this tree is almost of no interest, except the employment for the consolidation of embankments, railway ballasts or poor and degraded sloping lands.

Its pale yellow wood, with well visible rings and with pearly sheens n the radial sections is of poor value, tender, frail and light, with much developed medulla especially in the branches. It is used in the modest carpentry for packaging or for the production of paper. The dried specific weight is of 0,660 kg/m3. It is a fuel of average quality, with rather low calorific power and, if not well seasoned, crackles very much. The coal obtained is, on the contrary, of good quality. 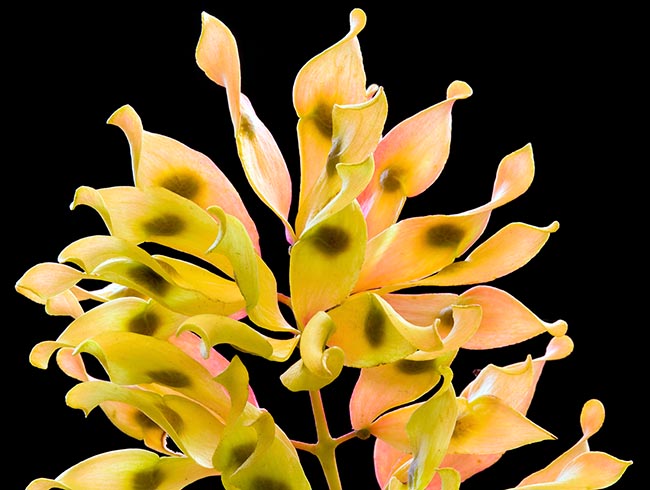 They are dispersed by the wind in spring and the horizontal sucker roots quickly steal the soil to the local plants. The wood is frail and light, of poor value, but various parts of the plant have medicinal virtues © Giuseppe Mazza

The ailanthus is not much long-lived, reaching the 60-80 (120) years and however develops trunks with circumferences of 3-4 metres at breast height.

It is one of the arboreal species more resistant to the adversities and to the pollution, to the cold weather and to other factors (limestone, pruning, aridity, etc.).

In its green parts it contains an irritating sap that may cause skin irritations, especially to the persons caring its pruning, is they do not protect the hands, the arms and the face. The bark contains a glucoside (or glycoside) analogous to the quassins, ailanthine, oxycoumarin, flofaben, saponins, an oleoresin, a resin, an aromatic essence and another one acrid, tannins, mucilages, etc. It is rarely employed for the anthelmintic and antidysenteric properties; in high dosages it is also emetic and, for external use, as well as the roots, has revulsive action.

In the past from the leaves they got by infusion a yellow-green dye for tinting the silk, linen and cotton. Their decoction (3 g per 100 ml of water) is recommended for those having oily hair as rinses after shampooing, seen the astringent-antiseborrheic properties. Always, the dried and pulverized leaves have been used in the past as insect repellent and as insecticide against aphids, mites and ants.

→ To appreciate the biodiversity within the SIMAROUBACEAE family please click here.