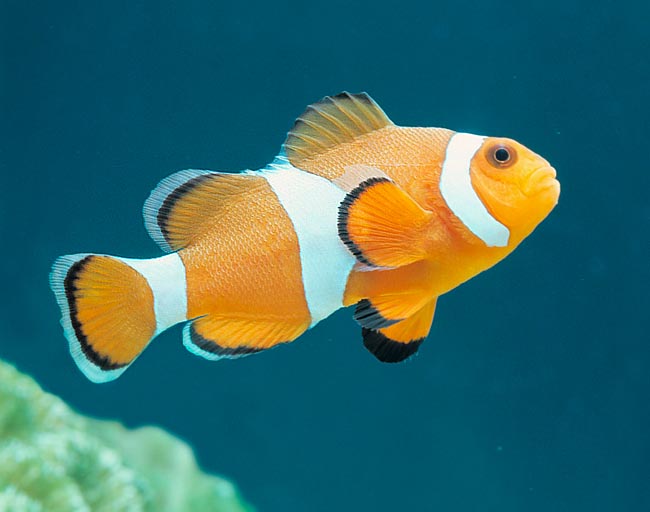 Amphiprion ocellaris is much alike Amphiprion percula, but has a vaster distribution © Giuseppe Mazza

The Clown anemonefish (Amphiprion ocellaris Cuvier, 1830) belongs to the class of Actinopterygii, the ray-finned fishes, to the order of Perciformes, to the family of Pomacentridae and to the subfamily of the clownfishes, the Amphiprioninae.

It lives in the tropical waters of the Indo-Pacific, with a vaster diffusion than the Amphiprion percula but with often overlapped areas. Indicatively, we find it in India, at the Andaman Islands, in Thailand, in Malaysia, at Singapore, in Indonesia, at Palau, in the Philippines, in Taiwan, in New Guinea and in Australia, up to the Solomon Islands and Vanuatu.

For size and appearance is very similar to the Amphiprion percula. It differs for the dorsal fin, which has, as an average, one extra spiny ray, less marked or almost absent black drawings and the body proportionally taller. The dorsal fin has 10-11 spiny rays plus 13-17 soft, the anal 2 spiny rays and 11-13 soft, whilst the pectoral ones, wide and roundish, count 16-18 unarmed rays. The ventral ones are more or less rounded, like the caudal, which becomes almost truncated in the biggest individuals. Also here, on the yellow-orange background, stand out three wide white vertical bands meant to break the contour of the fish.

The Amphiprion ocellaris nourishes of algae, copepods, amphipods and of all the small invertebrates and animal fragments it can encounter. Like all clownfishes, it lives in symbiosis with actinias having urticant tentacles and thanks to the mucus covering the scales, the juveniles become gradually insensible to the poison of the host. The tentacles, fatal for other fishes, offer them a safe place for hiding and reveal as a good deterrent against the predators. 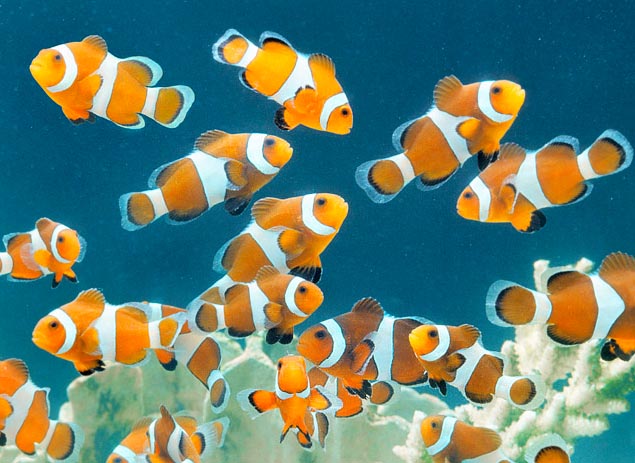 In exchange, the clownfishes do the cleaning of the house, eliminating the remnants of food and the parasites of the actinia, and drive away the fishes which nibble the tentacles.

On the other hand, the clownfishes are territorial and do not allow even the congeners to enter the house. Those of the same species are accepted only if young, when are males, seen that they are protandric hermaphrodite animals, which means that they come to life as males and then become females while ageing.

The social hierarchy is simple and strict: the biggest fish in the group is a dominant female. Then, in order of size, follow the spouse and the other males, more or less tolerated, which wait for the death of the mistress for upgrading their rank.

When this happens, the mourning over, the surviving spouse becomes female, and will marry the biggest male in the group. In nature, the eggs are stuck at the feet of the actinia, on the rock under the house. The male fecundates them and keeps the watch, ventilating them with its fins till the hatching, when the larvae are carried away by the currents.

If the aquarium has the right parameters, the reproduction in captivity is quite simple. It is sufficient to buy two young fishes, which automatically will become male and female, and one actinia belonging to one of the three aforementioned species. It is more difficult to feed the larvae as they need continuous cares. They are to be isolated (the best thing is to take off the eggs just before the hatching and place them in a pool aside) and nourished thrice a day, starting from the second day of life, with nauplius of Artemia salina. But before it is necessary to give them, on an hourly basis, the smallest organisms, available commercially, which serve to nourish the artemias, stopping the filter in order not to aspirate them between one administration and the other.

The survivors, starting from the fifth day, are usually out of danger. When two weeks old, once the metamorphosis is completed, they show two clear bands on orange background. When three weeks old, they reach almost the centimetre and when 12 they have the same look as the adults. A job for specialists or, better, for breeders, seen that it is one of the species more required by the aquariology market.

In nature the populations can double in 15 months and have a very low vulnerability index: only 23 on a scale of 100. This fish incarnates the character of Nemo in the cartoon “Finding Nemo”, that won an Oscar in 2004 as the best animated film and earned more than 900 million dollars to the Disney-Pixar company.