It is found in Colombia and in Venezuela, on the eastern side of the Andes, in the jungle on the mossy soil of the luminous forest between 1.500 and 2.300 m above the sea level, in the vicinity of the vast plains of tropical savannah (Los Llanos). In these hilly areas, covered by dwarf vegetation, it is partially exposed to the sun and grows during the rainy season whilst it loses the leaves during the dry one.

In Venezuela its distribution is limited to the states of Mérida and Táchira whilst in Colombia it is on the verge of extinction because of intensive harvesting due to its ornamental value. As a matter of fact, the main threat is given by its exploitation as an ornamental plant and, to a lesser extent, by the destruction of the habitat caused by the development of the agricultural activities.

In order to prevent the massive international trade, the species has been included into the Appendix II of the CITES.

Commonly called “Cradle of Venus” due to the labellum, completely enclosed by the sepals and by the petals, that sways when the flower moves simulating a cradle of a newborn. It is also called “Orchid tulip” because of the cup-shaped perianth resembling the tulips flower.

The name of the genus Anguloa is honoured to Francisco Angulo (? -1815), an important Spanish figure. 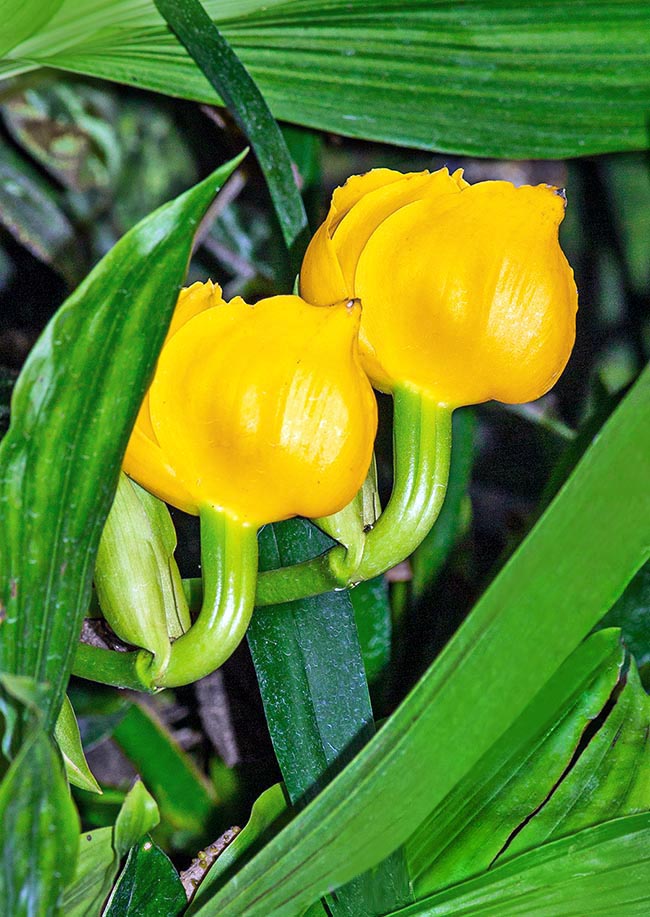 Called Orchid tulip due to the cup-shaped perianth, Anguloa clowesii is a species native to the eastern side of Colombian and Venezuelan Andes, at risk of extinction because of the intensive collection in nature © Mazza

He had been author of several naturalistic and technical scientific publications, unfortunately lost, and had held numerous public offices: General Director of the Mines of the Kingdom, State Counsellor and General Superintendent of the Mint and Interior Minister.

The specific epithet clowesii is honoured to the Most Revd. John Clowes (1777-1846), gardener, horticulturist and orchidophile of Broughton Hall (Staffordshire, UK), who left his rich collection to the Kensington Royal Gardens.

Anguloa clowesii is a terrestrial herbaceous, at times epiphyte, plant, with aggregated pseudobulbs, of dark green colour, of ovoid or oblong-ovoid shape, grooved, 23 x 7 x 5 cm. The pseudobulbs allow the plant to overcome the periods of reduced humidity or to compensate for the nutritional deficiency.

The pseudobulbs get thinner close to the foliar connections and often have thorns at the point of breaking off the leaves. The thorns serve for seizing leaves, twigs and other organic material that, decomposing, release nutritional elements the plant absorbs.

The 3 or 4 leaves are simple, 70 x 20 cm, of dark green colour, lanceolate with entire margins and parallel veins. The basal ones are shorter and wrap the pseudobulb during development.

From each pseudobulb form at most 5 uniflorous inflorescences, 15-35 cm long. The stem is erect, of about 30 cm, usually covered by 5 overlapped bracts, the floral bract measures 10 x 5 cm.

The flowers are fleshy, of yellow colour, at times with red dashes, rather big (5 x 7,5 cm), subglobose, waxy and very scented.

The tepals form a cup around the column. The dorsal sepal measures 7,5 x 5 cm and the lateral ones 6 x 4,5 cm, slightly falcate at the apex.

Also the petals are yellow (6 x 3,7 cm), less fleshy than the sepals, with 4 x 3,5 cm labellum, white, mildly yellowish, boat-shaped, trilobed, with margins bent outwards and ovoidal median lobe (1,5 x 1.5 cm) and vertical lateral lobes near the apical part of the column. The column has a short foot, slightly curved, yellow. The opening of the stigma is rectangular. The operculum is elongated, helmet shaped. The pollinaria are 2 couples with a long translucent stem that fits on the viscidium (retinaculum).

In the places of origin the blooming occurs during the months of February and March.

The pollination is done by male bees of the tribe Euglossini, attracted by the intense scent emitted by Anguloa clowesii.

The labellum guides the pollinating insects looking for scent into the narrow opening of the flower whilst their tongue, very long, allows to reach the nectar in depth. This habit of the males of collecting the aromatic substances with their bristly structures present on the anterior tarsi that then transfer in the spongious cavities of the hind legs is given, most likely, because the scent plays a rôle of sexual attractiveness towards females. 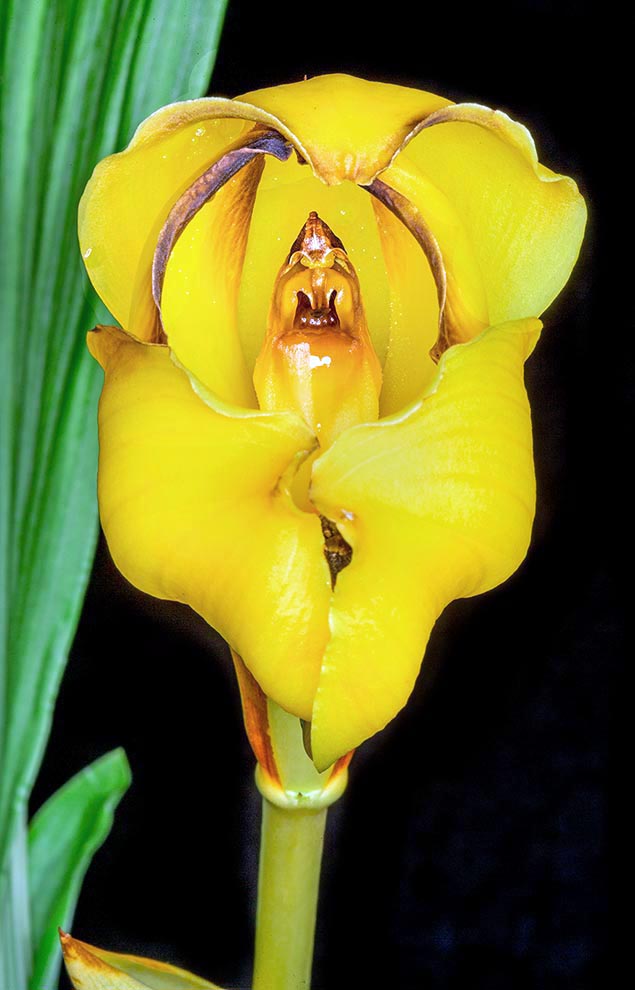 It is also known as Cradle of Venus due to the labellum, wholly wrapped by the sepals and the petals, swaying when the sweetly scented flower moves, simulating a newborn cradle. Easy to cultivate © Giuseppe Mazza

Even if the perception of perfumes is subjective, usually that of Anguloa clowesii is intensely sweet and tastes of cinnamon and of Wintergreen oil mixed together.

It has been seen, by means of gas chromatography, that this perfume is formed per more than 80% by a white, solid, organic compound: 1,4-Dimethoxybenzene.

After the collection of the nectar, when the bee is about to leave and releases its grip, the swinging lip causes the sticky part of the pollinaria to stick to its body (thorax or abdomen).

The pollination completes when the bee visits another flower thus carrying out the reproductive act of the plant.

The fruits are capsules that release very small seeds.

Anguloa clowesii is a very ornamental plant coveted by the connoisseurs and by the collectors.

The cultivation is rather easy because this species can grow and bloom also in temperate climates. In fact, its plants require cool temperatures, but well tolerate the warm summer days. The diurnal temperature may vary from 21 °C to 27 °C, whilst during the night may go down up to about 10-15 °C.

For the growth it is useful to furnish a very intense and diffused light and a standard substratum for orchids. A good substratum could be formed by a long-fibre sphagnum moss, volcanic rock, spongy perlite, fine bark of fir tree.

During the summer months the humidity should be high (70%) in order to compensate for the loss of water from the leaves that are fairly big. In winter, as the leaves are not present, the plants do tolerate a lower humidity.

The irrigation must be abundant during the vegetative period with rainwater, distilled or obtained by reverse osmosis filters.

During the other periods, when the substratum undergoes a slight drying, do not leave the roots to dry up and observe that the pseudobulbs do not wrinkle.

It is good to keep in mind that whilst the natural habitat provides a lot of humidity from rain, dew or condensation almost all the year round, in our northernmost latitudes attention is to be paid in order not to allow these deciduous plants to remain too wet in winter as they could rot.

As fertilizer it is suggested to use a liquid manure suitable for orchids, type 20-10-20, or a slow release one that is to be placed on the surface of the substratum. Do not overdose as this might cause the blackening of the leaves tips. Higher doses of fertilizers are necessary in spring and in summer, whilst in autumn, that coincides with the loss of the leaves, they are to be reduced and in winter, coinciding with the draft period, the fertilization must be completely suspended. At this time of the year you can only irrigate with distilled water.

The genus Anguloa has many affinities with the genus Lycaste of the same subtribe (i.e., Lycaste skinneri), this has allowed the creation of several artificial hybrids to which has been given the name of Angulocaste. At this moment at the International Orchid Register are inscribed several tens of them, some being more ornamental than the ancestors.