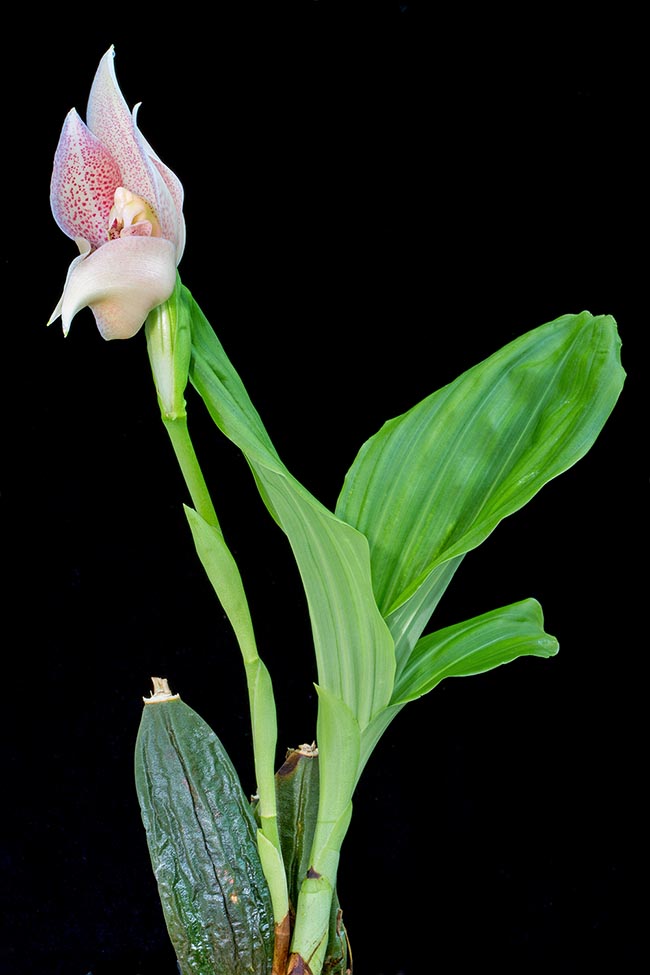 Anguloa uniflora is an altitude terricolous species of central Peru. It reaches the 80 cm with 20 cm pseudobulbs © Giuseppe Mazza

Anguloa uniflora Ruiz and Pavon (1798) is a species of the subtribe Maxillariina, tribe Cymbidieae, family Orchidaceae.

The main purpose was that of preparing a reliable inventory of the substances obtained from the plants of South America.

The expedition has produced almost 3000 different desiccate specimens and more than 2000 illustrations.

The first volume describes and illustrates all genera they had met, including two new genera of orchids, among whicAnguloa with the new species Anguloa uniflora, the first of the genus to be described.

The presence of this species has been reported, in the past, for Venezuela, Colombia, Ecuador and Peru, in mountain wooded areas, between 1400 and 2500 m above the sea level.

However recent studies indicate that this range must be restricted.

This has happened because the interpretation of the real Anguloa uniflora has been problematic since its first original description.

The same Authors Ruiz López and Pavón Jiménez report in their “Systema Vegetabilium Florae Peruvianae et Chilensis” of 1798 that this species was called by the Peruvian natives “Flor de Espíritu Santu” (Flower of the Holy Spirit) but it has been ascertained that this name is still now commonly used in Peru to indicate another much more common species : Anguloa virginalis.

Moreover, the AutÌors while describing the habitat where they grow, in the same publication, report that the natives indicated the plants collected by them with the vernacular name of “Carpales” (with many points) typical to the Anguloa virginalis.

Therefore, the distribution area of Anguloa uniflora, initially considered much broader, must be restricted to the regions with wet and dry seasons, of Huánuco and Junín in central Peru along the Cordillera Central and the Cordillera Azul.

The plant grows on the embankments and the brushwoods between 1400 and about 2500 m of altitude. 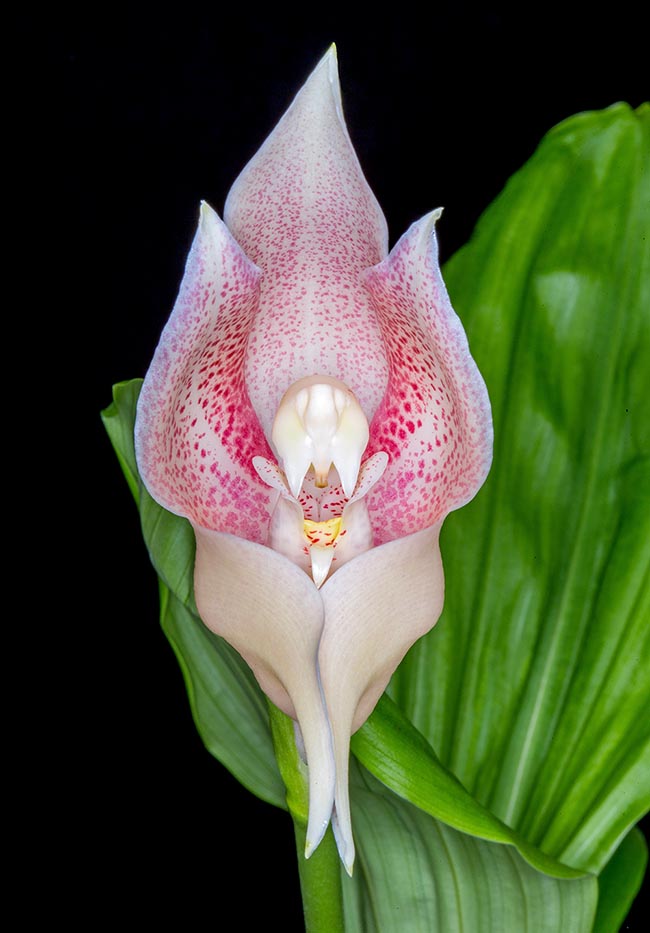 Due to the tulip-like flower, that seems to protect a baby inside, it is commonly called Swaddled babies orchid © Giuseppe Mazza

General Director of the Mines of the Kingdom, State Counsellor and General Superintendent of the Mint and Interior Minister.

The specific epithet comes from the Latin “ūnus”, one, and from “flos, flóris”, flower, to indicate that the floriferous axis bears only one flower.

Anguloa uniflora is commonly called “Swaddled babies orchid” due to the particularity of its flower that looks like a baby wrapped in a blanket and kept inside.

It is a terricolous perennial herbaceous plant, with bush and erect posture, 40-80 cm tall, considered as one of the biggest of the genus Anguloa.

It has egg-shaped pseudobulbs, longitudinally grooved, about 20 cm long. They are wrapped at the base by 3 to 5 foliar sheaths similar to small leaves.

The leaves, of dark green colour, are lanceolate, deciduous and may reach the metre of length.

The inflorescences, with 5, 6 or 7 big swollen bracts, take form at the base of the pseudobulbs and bear only one flower (rarely two) that resembles a tulip, fleshy, fragrant like Anguloa clowesii, long lasting, from two to three weeks.

The flowering takes place at the end of the winter (August and September in the origin countries) after the fall of the leaves. The flowers, typically resupinate and of cream colour, stained pink inside, have the lateral sepals overlapped with each other.

The petals are equal and similar to the dorsal sepal. The labellum is coriaceous, clawed, trilobate, fleshy, whose upper central part is swinging, in order to push the visiting pollinators back against the column with the four pollinaria sticking to it usually on the abdomen. When the pollinator enters another flower of the same species, it will hit the stimma with the pollen masses thus performing the pollination.

The pollinating insects are bees of the tribe Euglossini, of male sex, that appear particularly attracted by the scent, probably for collecting the volatile chemical substances, with their delicate cinnamon and mint perfum, on their legs in order to improve their courting ritual. 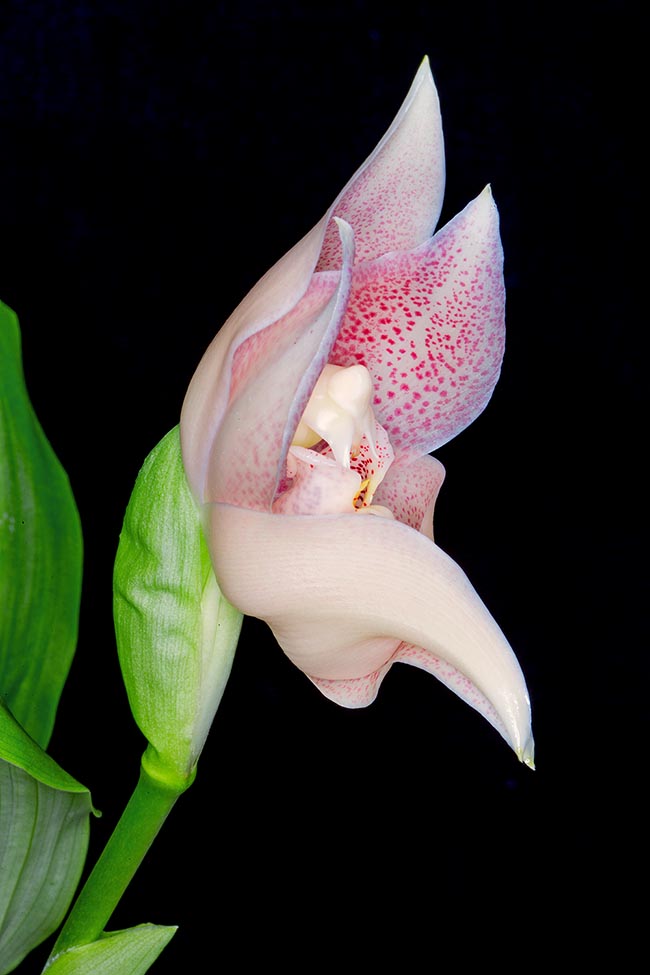 The flower, with delicate cinnamon and mint scent, is long lasting because where it grows the pollinators are rare © Giuseppe Mazza

The long duration of the flowers is an evolutionary adaptation for increasing the possibilities of pollination in environments where the pollinators are not many.

Once the fecundation has occurred, after several months take form the fruits that are capsules that when ripe release very small seeds.

These small seeds are of pale brown colour, short, with a blunt end and with long embryos of pale yellow colour.

Anguloa uniflora is a species little common in cultivation as it is difficult to be found for sale.

In order to cultivate it, it is necessary to have an environment allowing it to have during the night temperatures from 14 to 18 °C and the day from 22 to 30 °C.

The protected domestic environments might be fine. As the plant grows under the trees it needs a low luminosity (from semi-shade to dimmed light).

Humidity is important for the growth of Anguloa uniflora.

As a growing substratum it is good to utilize a mix of fine bark of fir with addition of charcoal, perlite and peat.

When the plant is growing it is good to keep humid the substratum with an input of water, better if distilled, every three days until the leaves fall, in this period irrigations must be done every 10-12 days.

For an optimal growth, the plants of Anguloa uniflora are to be fertilized with a mineral manure in solution for root absorption and this is to be applied during the spring and summer months, progressively stopping it in the autumn and winter ones.

If the edges of the leaves begin to dry, that is a sign of over-fertilizing.

In order to keep the plants in a good state of health, the repotting is to be done annually, in late winter.

The multiplication is done by division of the pseudobulbs. Attention is to be paid to parasites such as red mites, aphids and scale insects that can reduce the vigour of these plants.

Anguloa uniflora is a protected species, inscribed in the CITES Appendix II.