The Anoplocapros inermis Fraser-Brunner, 1935, belongs to the class of the Actinopterygii, the ray-finned fishes, to the order of the Tetraodontiformes and to the so-called deep waters boxfishes, grouped in 1940 by Fraser-Brunner in the family of the Aracanidae counting 6 genera and 12 species.

The genus Anoplocapros gets its origin from the Greek “ανω” (ano) = on +  “οπʎον” (oplon) = shield and from the Latin “caper” = billygoat, with reference to the massive and solid head of these fishes pretotected by showy arches over the eyes. The name of the species inermis = defenceless, with no arms, in Latin, tells us that this is a fish having no spiny protuberances, not at all aggressive that bases its defense on the tetrodotoxin, the powerful venom present, more or less, in the skin of all boxfishes. The previously used term of Anoplocapros robustus reminds us that due to its size it stands among the giants of the family.

The Anoplocapros inermis is a species of subtropical waters present in the Indian Ocean, along the coasts of South Africa, and in Oceania, from south-eastern Australia, Tasmania included, up to the Solomon Islands. 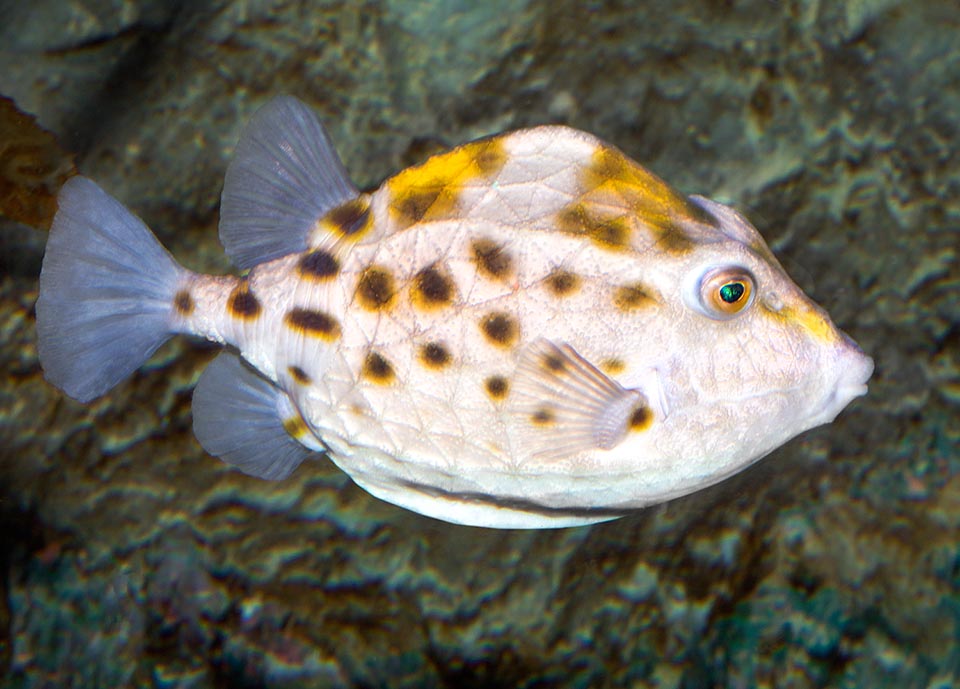 Female of Anoplocapros inermis. This boxfish of deep waters, lives along the coasts of South Africa and in Oceania © Giuseppe Mazza

It lives on the continental shelf between the 100 and 300 m of depth, mainly on detrital and sandy bottoms; where it dislodges, like its similars, with strong puffs of water, the small crustaceans and the other benthic invertebrates that stand at the base of its diet. The young spend the first part of their life even in quite shallow waters among the corals.

It can be 37 cm long. It has no scales and the body is protected, as is the case in the world of the boxfishes, by an under-skin carapace formed by merged hexagonal plates with openings for the eyes, the mouth, the fins, the gills and the anus.

The roundish rostro is pointed for seizing tiny preys inside the holes. Due to the presence of the big ventral keel and analogous curvature of the back, in the whole it looks a lot like the Anoplocapros lenticularis, which however has the profile of the muzzle concave, whilst here it is convex, and the Aracana aurita, which, however, measures about half of its size and has showy spiny protuberances. 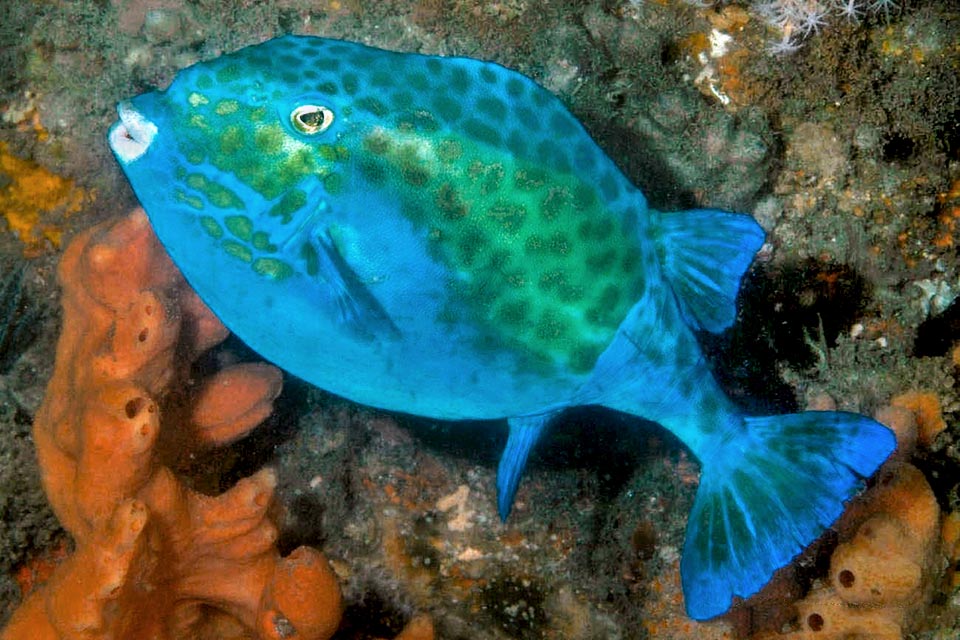 The remarkable sexual dimorphism of the males is not surprising, being frequent in various membres of the belonging family © Tom Davis, Reef Life Survey

The Anoplocapros amygdaloides, very similar but long at most 30 cm, distinguishes in Australia for a westernmost distribution area and the profile of the muzzle flat.

There is a remarkable sexual dimorphism. Whilst the females have a livery with whitish beige background with dark dots, in the males, after an analogous juvenile phase, these dots disappear under a blue veil, less marked on the sides that hence show yellowish hues.

The males, almost spherical, are orange with black dots, a perfect mimicry in the colourful world of the corals who accommodates them during the growth. 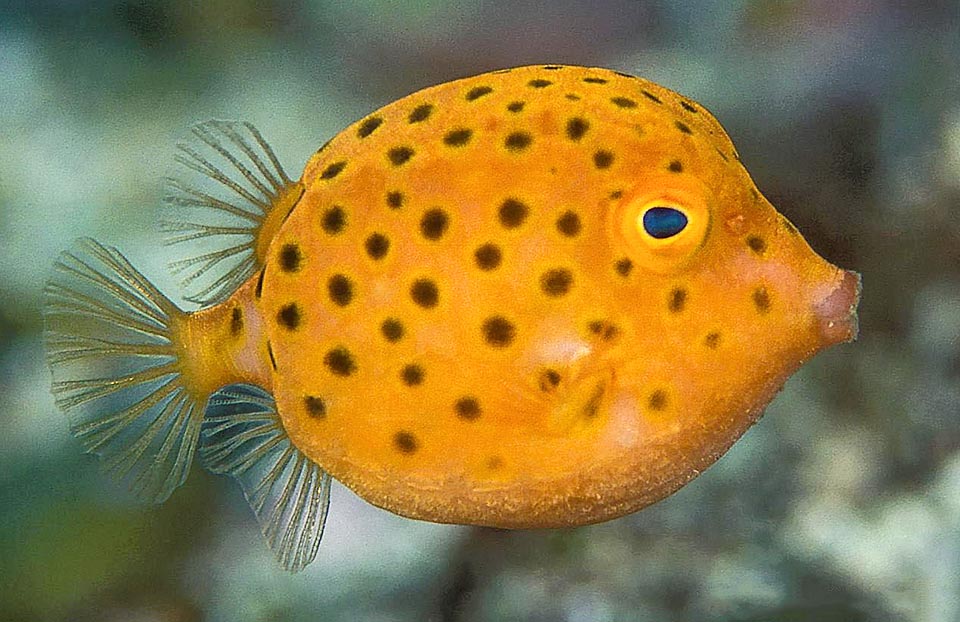 The young, totally different, are, as sometimes is the case in the colourful world of the corals, showy polka-dots © Ian Shaw, Reef Life Survey

Indeed, little is known about the life and the reproduction of this fish, except that the eggs are entrusted to the currents, and that it is not an endangered species.

In nature, it is predated by the Fur seal (Arctocephalus pusillus doriferus) and by the Australian pied cormorant (Phalacrocorax varius) clearly not much sensitive to the tetrodotoxin.