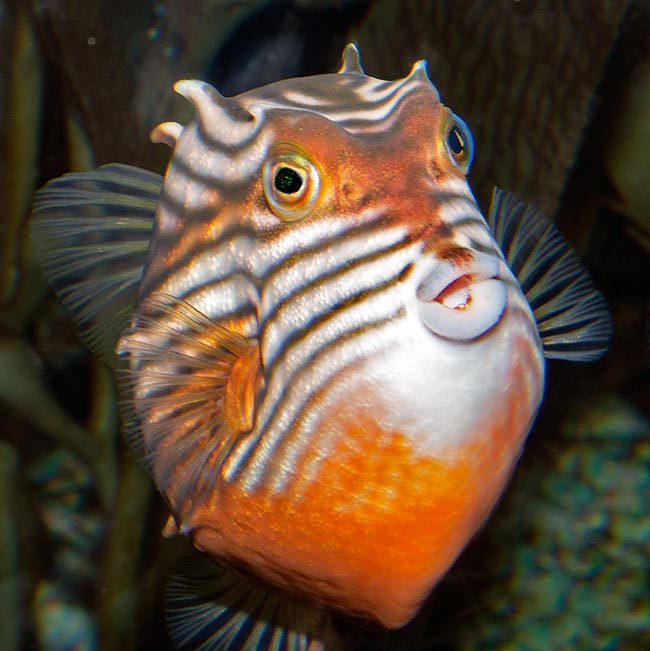 With those unusual small horns and the endearing lips, the Aracana aurita is a nice boxfish of deep waters © Giuseppe Mazza

The Aracana aurita Shaw, 1798, belongs to the class of the Actinopterygii, the ray-finned fishes, to the colourful and multiform order of the Tetraodontiformes, the group that includes the puffers, like the Arothron mappa, the triggerfishes such as the Balistes vetula and the boxfishes like the Ostracion cubicus, and to the family of the Aracanidae, created in 1941 by Fraser-Brunner for the deep waters boxfishes, that counts only 6 genera (Aracana, Anoplocapros, Capropygia, Caprichthys, Kentrocapros and Polyplacapros) an a total of a dozen of species.

The genus Aracana is of uncertain origin. Some speak of a city of Bolivia, but this seems absurd seen the geographic distance in a nation that has no access to the sea. If we have really to look for a city that one might be rather, due to an inversion of syllables in the time, Akarana, the Maori name for Auckland, the largest city of New Zealand. But the fact remains that in New Zealand it does not seem to have been fished and that the fishes used for the description of the species were coming from Tasmania.

The specific term of aurita is easier to be understood. In fact, it comes from the Latin “auritus” = large-eared, because of its showy horns close to the eyes.

The Aracana aurita is a temperate waters species present in the eastern Indian Ocean and in the south of Australia up to Tasmania, and further north in some islands of Oceania.

It lives in the continental shelf between the 3-200 m of depth, quite often on the outer side of the reefs with a predilection for the detrital and sandy bottoms, without neglecting the estuaries. 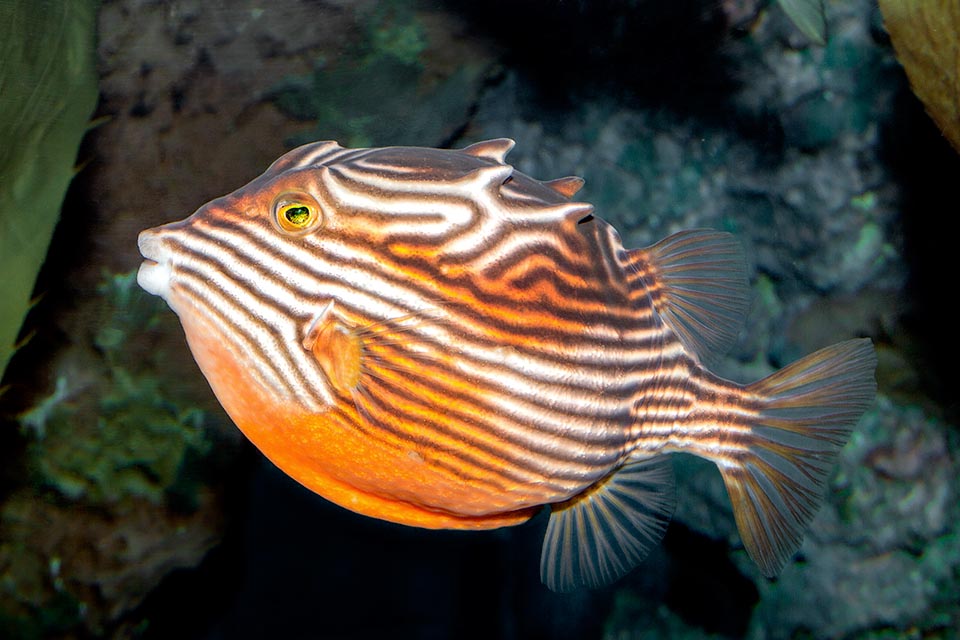 20 cm long, with keeled belly and back, lives at 10-200 m of depth in the eastern Indian Ocean and in the south of Australia up to Tasmania © Giuseppe Mazza

It may be 20 cm long. It has no scales and the body, flat in comparison to the usual boxfishes, is protected like them by a carapace formed by merged hexagonal plates with orifices for the eyes, the mouth, the fins, the gills and the anus.

At first sight, in the whole, it looks a lot like the Anoplocapros lenticularis due to the presence of the great ventral keel and the analogous profile of the back, but here it has in plus the characteristic spiny protuberances, present also on the sides and over the eyes. 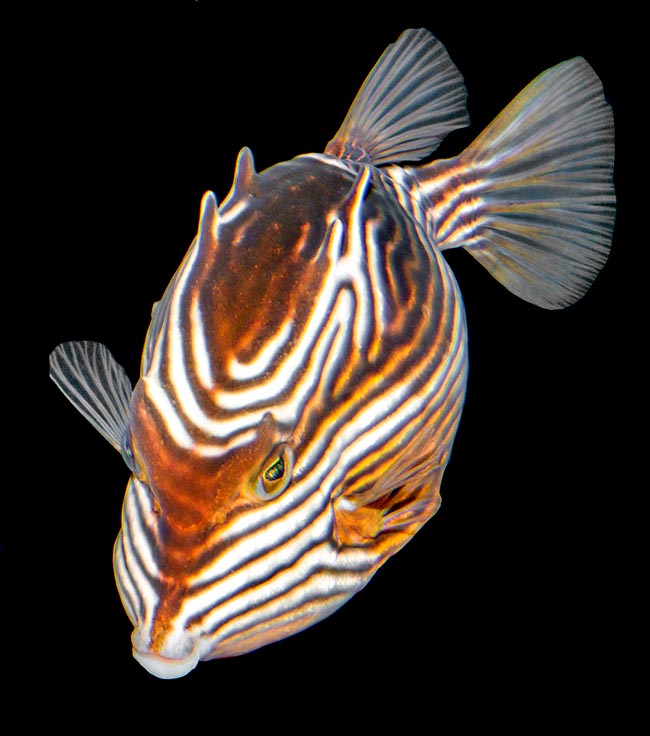 The females, much more numerous than males, were once mistaken with those of the Anoplocapros lenticularis © Giuseppe Mazza

Also in this species the ventral fins are absent and the locomotion is entrusted to the strong undulating movements of the big caudal one, tendentially truncated with the age, helped by the pectorals that count 10-12 soft rays.

A remarkable sexual dimorphism is present.

The look of the females, much more numerous than the males, is completely different: the spines are shorter and the livery appears reddish brown, especially on the sides and on the abdomen, with clear zones and dark lines, more or less parallel, that in the past have often created confusions due to their resemblance, little horns aside, with the females, present in the same area, of the Anoplocapros lenticularis.

The young, roundish, recall in both species the maternal livery, with dark stripes on big dots of background white or red, by sure mimetic in the multicoloured world of the madreporic formations, rich of plays of light, with moving light and dark.

The diet of the Aracana aurita is mainly based on crustaceans and benthic annelids, but also on cnidarians and on the edible debris falling on the bottom. It has been filmed while hunting on a sandy bottom, between scanty aquatic plants, small crustaceans and other benthic invertebrates it drives out with unexpected and strong blows of water. 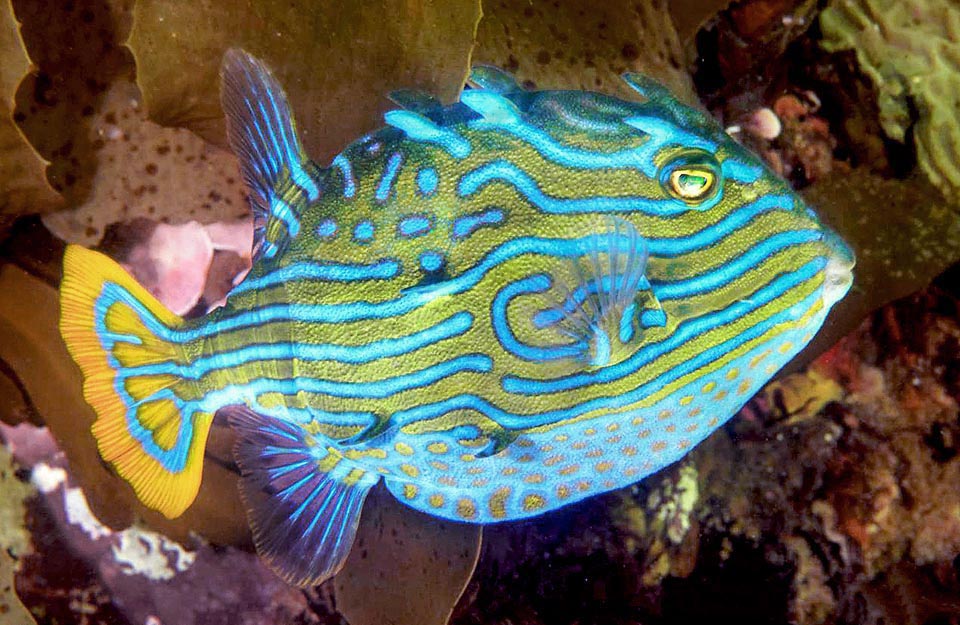 A male. It is a species with a remarkable sexual dimorphism that eat small benthic animals. The showy livery reminds the predators that the skin is imbued with poison © Rick Stuart-Smith, Reef Life Survey

In order to discourage the predators, as happens in the world of the boxfishes, also here the skin is imbued with a powerful venom, the tetrodotoxin, released when the fish is upset and even more when it dies, killing in this case the possible guests of the aquarium where it lives. Therefore, a spectacular species but suitable only for the large pools of the public aquaria, especially since, seen the depth where it lives, badly bears temperatures over the 16 °C.

Not much is known about this fish, apart that the eggs are entrusted to the currents and that it is not an endangered species. 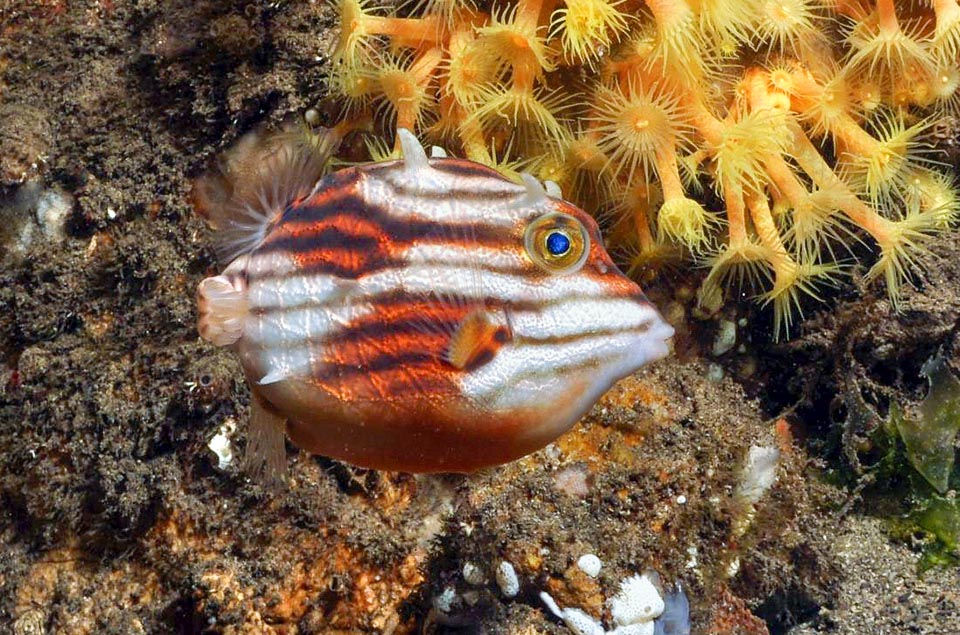 The young, with roundish look, have a mimetic livery similar to the females. It is not an endangered species © Rick Stuart-Smith, Reef Life Survey

The resilience is good and the index of vulnerability is extremely low, marking (2019) only 10 on a scale of 100.