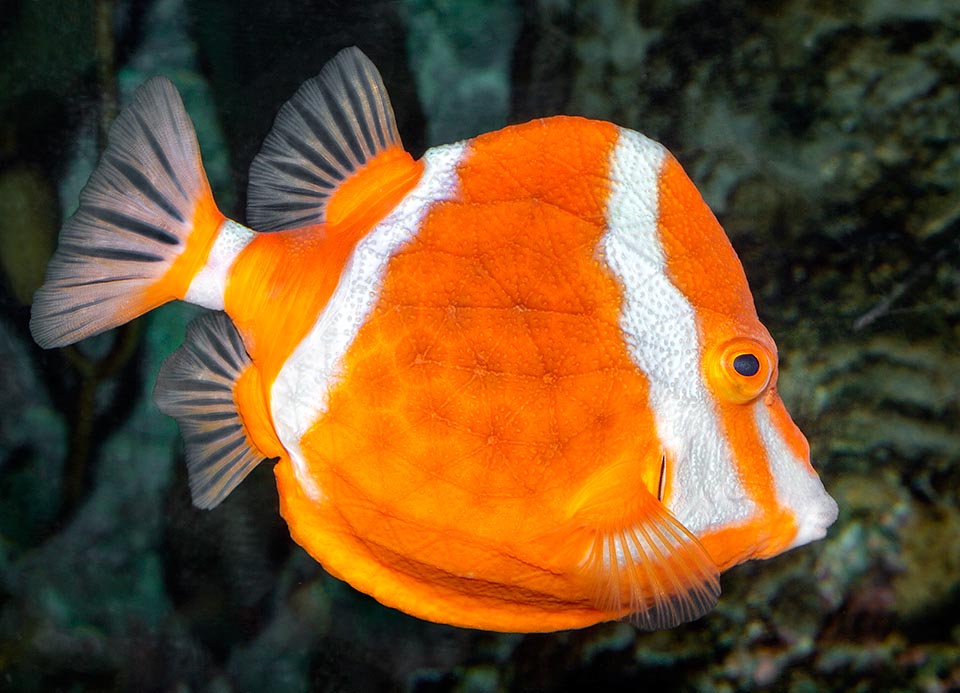 The Anoplocapros lenticularis Richardson, 1841, belongs to the class of the Actinopterygii, the ray-finned fishes, to the order of the Tetraodontiformes, the group that hosts the porcupinefishes, such as, for example, the Diodon liturosus, the triggerfishes such as the Balistoides conspicillum and the boxfishes like the Lactoria cornuta and to the family of the Aracanidae, created by Fraser-Brunner in 1941 for the deepwater boxfishes, that counts only 6 genera and 12 species.

The name of the genus Anoplocapros comes from the Greek (ανω) “ano” = on and (οπʎον) “oplon” = shield and from the Latin “caper” = billygoat, with reference to the “billigoat head” of this fish that has a solid bony under skin shield with two small spiny horns over the yes. 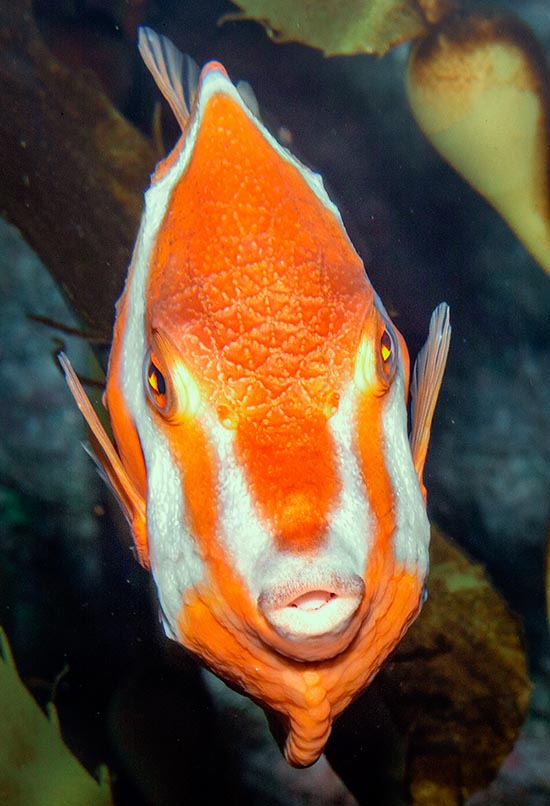 In front, besides the spiny small horns protecting the eyes we note, just after, a depression of the profile, typical to the species, and the showy ventral keel. The skin is full of venom © G. Mazza

Conversely the name of the species lenticularis comes, always in Latin, from “lentícula” diminutive of “lens, léntis” = lens, therefore equipped of lenticels, due to the sparkling livery studded of flat umbos with circular dots, similar to small lenses.

The Anoplocapros lenticularis is present in the eastern Indian Ocean, endemic to the western and southern coasts of Australia.

It swims in the continental shelf, between 10 and 220 m of depth, usually off the coral reef or among the rubble of madrepores on the external side of the reef, but it can be found also in the seagrass meadows and on the bottoms, sandy, detrital or muddy, where it looks for the small crustaceans and the other invertebrates that are part of its diet.

It has no scales. The body, flattened if compared to the typical structure of the boxfishes, is protected like these by a carapace formed by hexagonal plates joined together, here well visible under the skin, with orifices at the eyes, mouth, fins, gills and anus.

The males can be 33 cm long, whilst the females do not usually exceed the 20 cm.

The abdomen is gaudily keeled, not less tall and roundish than the back.

Before the eyes, defended by a small spine, the profile of the head is concave and this is one of the elements that distinguish it from the other two congeners, the Anoplocapros amygdaloides, that occupies more or less the same waters, in fat has a flat profile, whilst the Anoplocapros inermis, at home at the boundary between the eastern Indian Ocean and the western Pacific, has, on the contrary, a convex profile.

The snout is pointed for digging out and grabbing also in the crevices, with that sort of beak born in the Tetraodontiformes from the fusion of the four front teeth, the possible preys hidden, of which, perhaps, it gets the smell. 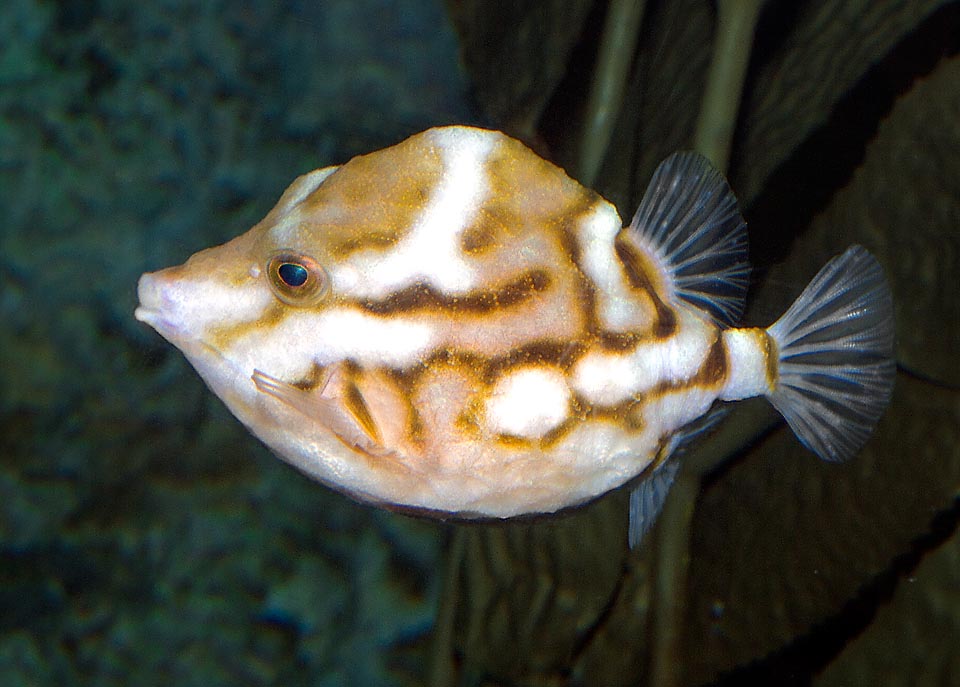 The female is reddish brown with irregular black lines that in the past have mistaken the ichthyologists due to a certain resemblance, moreover, with the Aracana aurita © Giuseppe Mazza

Then there is the triangular small stripe that starts from the eyes enlarging towards the snout and the belt on the caudal peduncle. Defensive warning colours, to remind the predators that the skin exudes a strong defensive poisonous mucus: the tetrodotoxin.

Completely different is the livery of the female: reddish brown with irregular black lines that in the past originated discussions among the ichthyologists due to the resemblance with the female of the Aracana aurita, species of analogous shape but with dark parallel drawings.

As it happens for the fishes of the genus Ostracion it cannot be hosted together other species in small aquaria. If it is repeatedly disturbed or dies, in fact it releases strong doses of tetrodotoxin killing the other fishes. A very unlikely thing to occur in the home environment, seen that the cost of this species exceeds the 1000 Euros in the aquariological market and that it concerns a deep water species, with temperatures under the 16 °C, hospitable, therefore, only in the chilled waters of the large public aquariums. 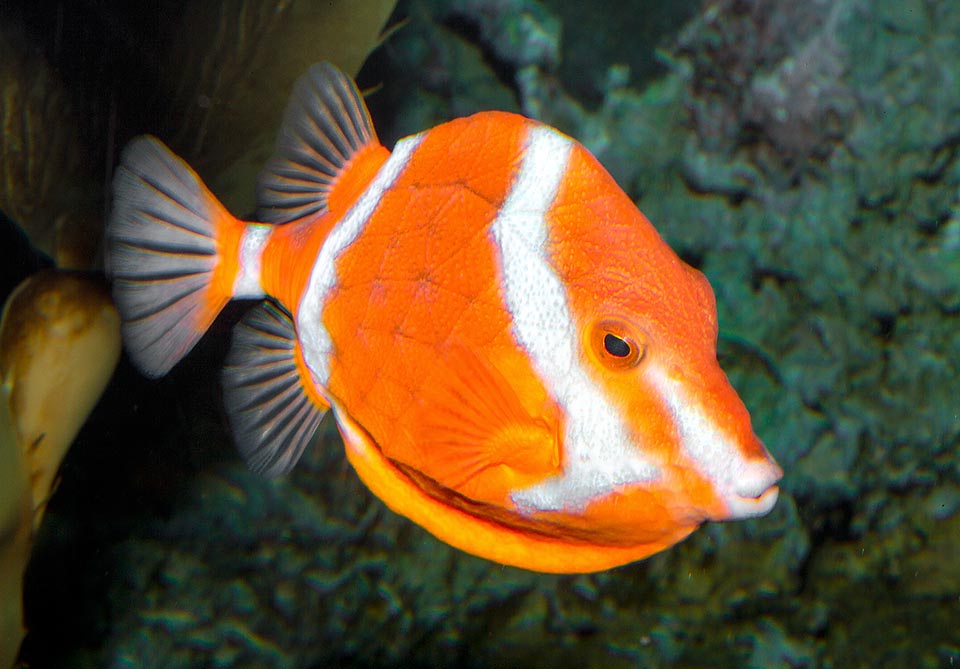 The cost in the aquariological market, exceeds 1000 Euros but it’s surely not menaced by the home aquariums, because it can live only in pools with chilled water at 16 °C © Giuseppe Mazza

It has been noted that in order to flush out the preys the Anoplocapros lenticularis often moves the sediments with strong jets of water, but little is known about its reproduction, apart that, after the wedding, the eggs are entrusted to the currents and that they too are full of venom.

The resilience of the species appears good. The fishing vulnerability index is very low, marking just 23 on a scale of 100.