The species is native to Australia where it grows in the Atherton Tableland (north-western Queensland) in the rain forest on the banks of the stream Creek and of its tributaries, close to Myola, between the 350 and 450 m of altitude.

The name of the genus is the combination of the Greek substantive “ἄρχων, -οντος” (archon, -ontos) = high magistrate and of the name of the palm Phoenix; the specific name refers to the place of origin.

The Archontophoenix myolensis Dowe (1994) is an unarmed monoecious species with solitary erect stem, cylindrical, slightly enlarged at the base, up to 20 m tall with a diameter of 20-30 cm, broadened at the base up to about 50 cm, of green colour in the youngest part, grey and fissured in the oldest one, on which are visible the rings trace of the junction of the fallen leaves.

The leaves, on a 20-30 cm long petiole, are paripinnate, 3-4 m long, slightly arched and with the terminal part slightly rotated around the rachis, the foliar base wraps entirely the stem for a height of 0,8-1 m forming a sort of tubular capital, just enlarged at the base, of pale green colour with cerulean reflections. Leaflets, in a number of about 70 per side, linear with acute apex, long in the median part up to about 90 cm and 3-4 cm broad, close together and arranged regularly on the rachis in one plane. Of glossy intense green colour above, grey green below, due to the presence of microscopic silvery grey scales, and with no “ramenta” (very small elongated brown scales with irregularly toothed margins) in the central vein. 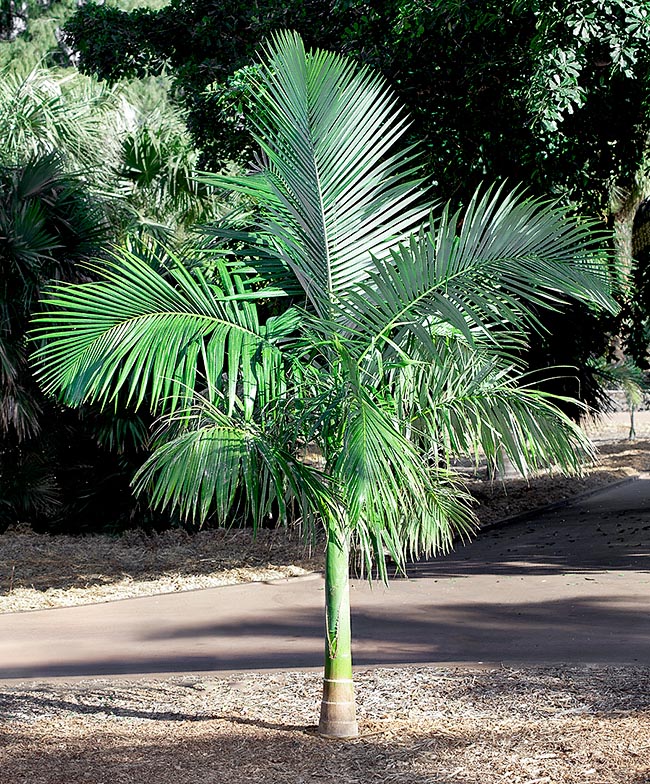 Archontophoenix myolensis is a rare Australian species endemic to the rain forest of the stream Creek and of its tributaries in north-eastern Queensland, close to Myola, between 35 and 450 m of altitude © Giuseppe Mazza

Panicle inflorescences under the leaves (intrafoliar) of cream white colour, initially contained in a deciduous bract of pale green colour, up to 45 cm long, proterandrous (the male flowers ripen before the female ones, this avoids the autogamy favouring the cross-fertilization).

Fourth order ramifications and uni-sexual flowers of cream white colour, sessile, united in groups of three (a female flower between two male ones), excepting the terminal part of the rachillae (secondary ramifications of the inflorescence) where are present only male flowers, solitary or in couple.

The fruits are ovoid, elongated, 1,3-2,1 cm long and of 1-1,2 cm of diameter, glossy red when ripe, containing only one seed; the mesocarp displays only one layer of thin fibres, less than 0,5 mm broad, bifurcated around the centreline.

It reproduces by seed, previously kept in water for 3 days, in aerated and draining loam maintained humid at the temperature of 24-26 °C, with germination times of 1-3 months; the first leaflet is bifid.

The rarest in the genus, in nature as well as in cultivation, it has the same ornamental and landscape potential, as isolated specimen, in group or in a row on the sides of roads and alleys, of the other Archontophoenix.

Of easy cultivation and of quite rapid growth, it can be utilized in the tropical, subtropical and in marginally in warm temperate regions, where temperatures just under the 0 °C are rare and short lasting events.

It requires an exposition in full sun, but in the juvenile phase when it needs a semi-shady position, preferably sheltered from the wind, high temperatures and environment humidity. It adapts to various types of soil, provided draining, but grows at the best in the rich ones and with ample availability of water, in particular in the regions characterized by long warm and dry summers. Young specimens can be cultivated in pot for decorating luminous inner spaces, utilizing a draining loam rich of organic substance.

Because of the restricted area of origin, the limited number of individuals and the increasing anthropization, the species has been inserted in the red list of the IUCN (International Union for the Conservation of Nature) as “vulnerable” (species under risk of extinction in nature).