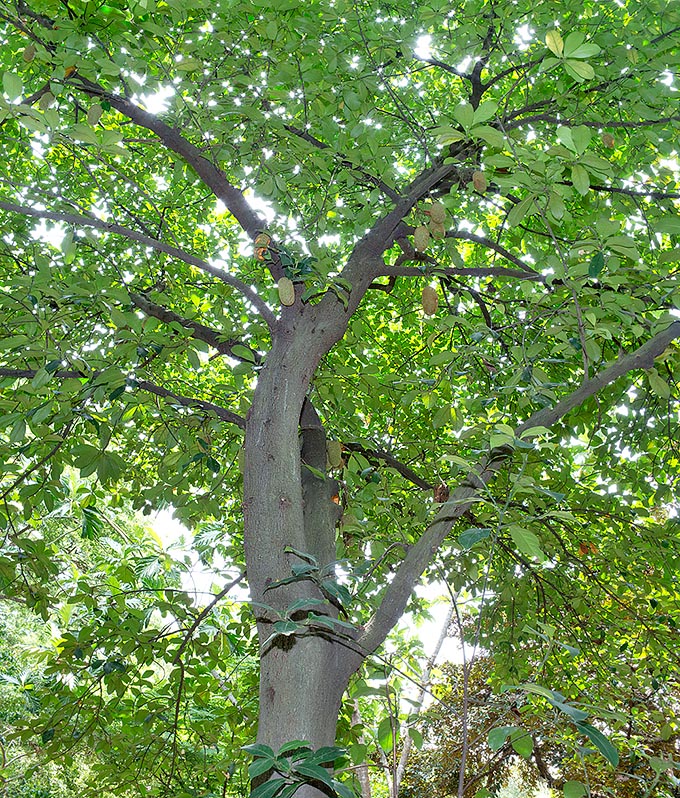 The species is native to Borneo, Brunei, Indonesia (Celebes, Irian Jaya, Java, Kalimantan, Moluccas and Sumatra), New Guinea, Peninsular Malaysia, Singapore and Thailand where it lives in the pluvial forests, up to about 500 m of altitude, with climate characterized by high rainfall distributed all over the year and possible periodical floodings.

The name of the genus is the combination of the Greek substantive “ἄρτος” (artos) = bread and “καρπός” (carpos) = fruit, with reference to taste of the fruits after cooking of the Artocarpus altilis (Parkinson ex F.A.Zorn) Fosberg, 1941; the specific name is the Latin adjective “ integer” = entire, with reference to the margins of the leaf.

The Artocarpus integer (Thunb.) Merr. (1917) is an evergreen tree, 5-20 m tall with a diameter of the trunk up to about 50 cm, with brown grey bark; all the parts of the plant contain a white latex.

The leaves, on a 1-3 cm long petiole, are alternate, simple, elliptic-ovate with entire margin and pointed apex, 5-25 cm long and 3-12 cm broad, coriaceous, glossy intense green above, pale green and pubescent below. 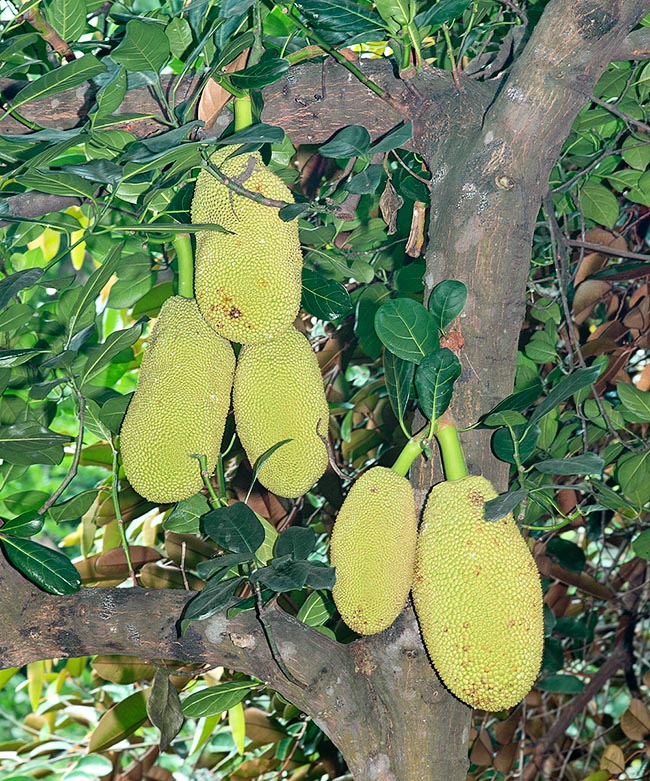 The big fruit, botanically a syncarp, is formed by more accreted fruits merged in globose or oblong-cylindrical structures of 20-40 cm long and of 10-15 cm of diameter with surface covered by short pyramidal tubercles © Giuseppe Mazza

The new leaves are enclosed by two stipules (appendages at the base of the leaf having the main purpose of protecting it during the initial phase of growth), deciduous, oblong-triangular, 6-9 cm long, of dark green colour; sprigs, stipules and leaves are provided of bristly brown hairs, up to about 3 mm long.

Solitary unisexual inflorescences on the plant itself directly from the trunk or from the branches (cauliflory) on short leafy shoots, the male ones are cylindrical racemes of 3-5 cm of length and 1 cm of diametre, with tiny yellowish flowers, the female ones are globose or ellipsoid racemes with several tubular flowers.

The fruit, on a 7-10 cm long peduncle, is a syncarp (aggregation of more fruits grown together and merged) globose to oblong-cylindrical, 20-40 cm long and of 10-15 cm of diametre, with the surface covered by short pyramidal tubercles, of yellowish to orange yellow colour, emitting an intense unpleasant odour when ripe, similar to that of the Durian (Durio zibethinus L., 1774) and of the Jackfruit (Artocarpus heterophyllus Lam., 1789).

The seeds, 15-100 per fruit, are ovoid slightly flattened of pale brown colour, 2-3 cm long and 1,5-2,5 cm broad, surrounded by a fleshy aril of greenish, yellow or orange colour, edible.

It usually reproduces by seed, that has a low germinability duration, in draining organic loam maintained humid at the temperature of 24-26 °C, with the first fructification starting from the 3 years of age, and by cutting.

Rapid growing species, cultivable exclusively in the tropical and subtropical regions, as does not bear temperatures close to 0 °C, with no dry season, but with high and well distributed rainfall. Requires an exposition in full sun, but during the first phase of growth, and deep and rich of organic substance soils, slightly acidic to neutral. 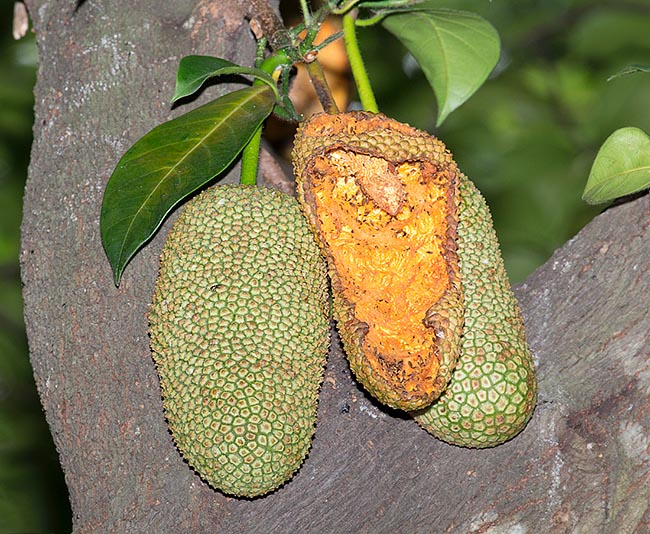 An element gnawed by the forest animals. The unripe fruits are consumed by the local populations as vegetable, the seeds are rich of carbohydrates and various parts of the plant have medicinal properties © Giuseppe Mazza

The unripe fruits are consumed cooked in coconut milk as vegetable, the pulp (aril) surrounding the seeds of the ripe fruits, of pleasant taste, sweet, less acidulous and fibrous than that of the jackfruit, is consumed raw as well as cooked or variously prepared. The seeds, rich of carbohydrates, proteins, fibres and minerals, are consumed boiled in salted water and peeled, of taste similar to the Water chestnut (Eleocharis dulcis), roasted or fried; also the flour has a high nutritional value and can replace in part that of wheat in the preparation of the bread.

Leaves and fruits are utilized in the animal feeding; the wood, of intense yellow colour and of excellent quality, is used in the constructions, in the fabrication of furniture, boats, tools and everyday objects, from the wood they get also a yellow dye used for colouring the cowl of the Buddhist monks.

Various parts of the plant are utlized in the traditional medicine of the local populations for various pathologies; from the leaves they have gotten an hydrocarbon, the stilbene, with anti-malarial properties.

Its ornamental characteristics are not to be undervalued