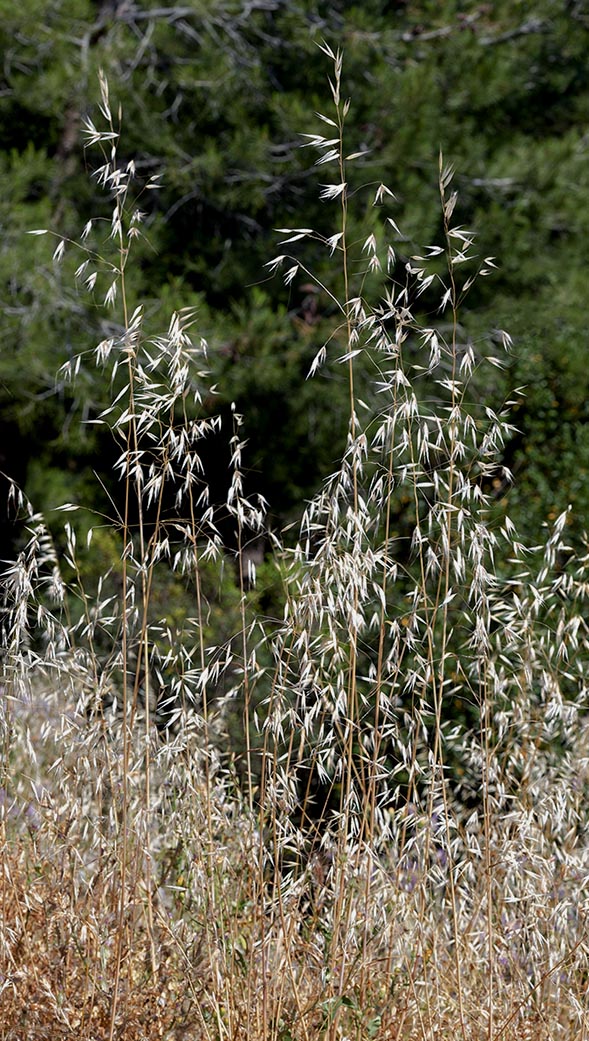 With a very vast range in Mediterranean climates, Avena barbata is an annual spring blooming plant frequent in lawns, uncultivated and cultivated fields. Its inflorescences are 10-30 cm long © G. Mazza

Avena barbata Link is a herbaceous plant of medium size belonging to the family of the Poaceae, better known as Graminacae.

This is a very vast group of plants present all over the world with an ample diversification of morphological characteristics and colonized habitats.

For what etymology is concerned, the generic term Avena given it by Linnaeus is the Latin name utilized by the Romans to indicate this plant, cultivated since ancient times, and maybe derived from the Sanskrit ‘avasa’ (nourishment, forage).

The specific epithet barbata refers, always in Latin, to the inflorescence equipped with barbs.

It is an annual plant blooming from May to July, 30-80 cm tall, with erect posture and adventitious fasciculate roots.

Like in the other Poaceae, the herbaceous stem is called “culm” and is usually solitary, glabrous, ascending and slender.

From the nodes along the culm originate leaves arranged in an alternate and distichous way, that is, they are alternate, one on the right and one on the left, hence organizing in two lines.

The leaf is formed by the sheath, the basal portion of the leaf that envelopes the stem, by the ligula, a membranous expansion of the foliar sheath that protrudes inward to the limit between the sheath and the margin, and by the blade that is the widest part of the leaf.

The latter is characterized by parallelinerved veins and looks quite flattened and with acuminate apex, 14-30 cm long and 2-4 mm broad. The surface is glabrous and there are no papillae. The borders are ciliate.

In the lowest leaves the ligula is acute, 3-4 mm long, whilst in the upper leaves is truncated and only 2 mm long.

The ear (primary inflorescence) has the shape of an ample and rich panicle 10-30 cm long composed by several unilaterally arranged spikelets. It is characterized by a long (1-3 cm) peduncle and by erect-patent branches, of which the lowest ones carry 1-3 hanging spikelets.

The spikelet (secondary inflorescence) is 18-30 mm long and bears 2 or 3 flowers. It is formed by an axis called rachilla, bearing at the base some bracts that enclose the flowers, known as glumes, that are distinguished in superior and inferior, usually of slightly different size and about 15-30 mm long.

At the base of each flower stand two bracts (glumellas): the palea and the lemma. The palea has a lanceolate shape with some veins and ciliate margins. The lemma, 13-20 mm long, is bifid in the distal part, equipped with two aristiform silks. In the lower part it is bristly due to rigid hairs, whilst on the back is present a 30-50 mm long awn. When mature the rupture of the rachilla causes the disarticulation of the spikelet.

The fertile flowers are actinomorphic, that is radially symmetric, formed by 3 verticils: reduced perianth, androecium and gynoecium. The perianth is reduced to two lodicules, that is inconspicuous translucent scales, perhaps residue of a 3 sepals verticil. The lodicules are membranous and are not vascularized. 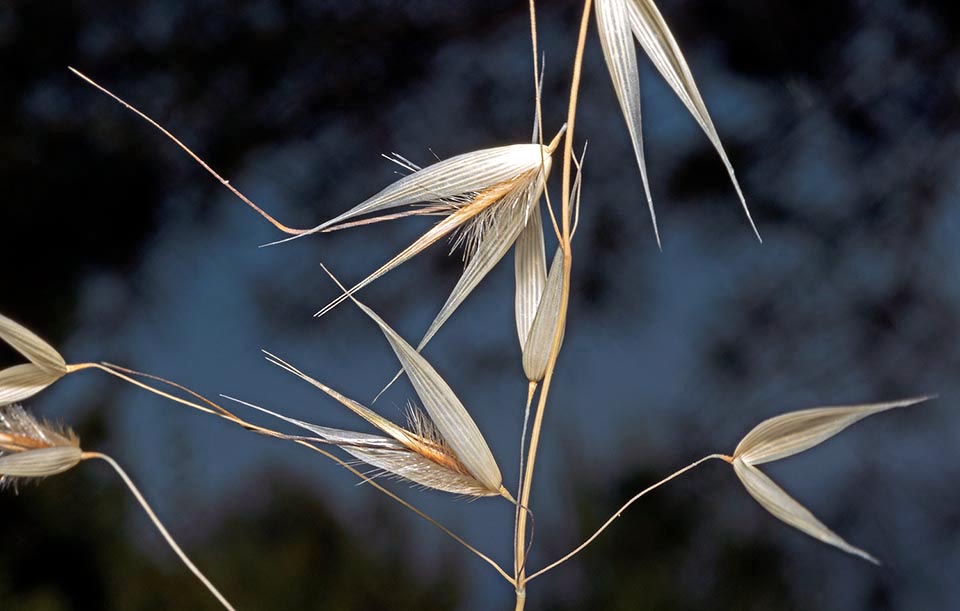 Inflorescence with unilaterally arranged spikelets. Top left, we note the long awn elbow bent that while rotating favours the penetration of the seed into the soil © G. Mazza

The androecium is formed by 3 stamens each with a short free filament, one sagittate anther and two pockets. The gynoecium is formed by 3-(2) merged carpels forming a superior ovary. The ovary, pubescent at the apex, has only one locule that in turn contains one single ovule. The style is short with two papillose and distinct stigmas. The fruit is a caryopsis, a fruit dry and indehiscent (that is, does not open spontaneously when ripe to disperse the seed) containing only one seed fused with the pericarp, typical to the family of the Poaceae.

Avena barbata has a vast distribution in the Euro-Mediterranean territories, pushing eastwards in Middle East and Central Asia. In the Mediterranean areas it is usually a very common plant, whilst it is more sporadic in the cold areas and in the mountainous ones. Furthermore, the species results introduced and naturalized also in other habitats with Mediterranean climate, like those present in New Zealand, Australia, South Africa, Argentina, Chile, Brazil, Uruguay and California.

At times it is possible to find mixed populations of Avena barbata with these two other species, even if their distinction on the morphological point of view avers rather difficult and not all Authors are inclined to consider them as different species. 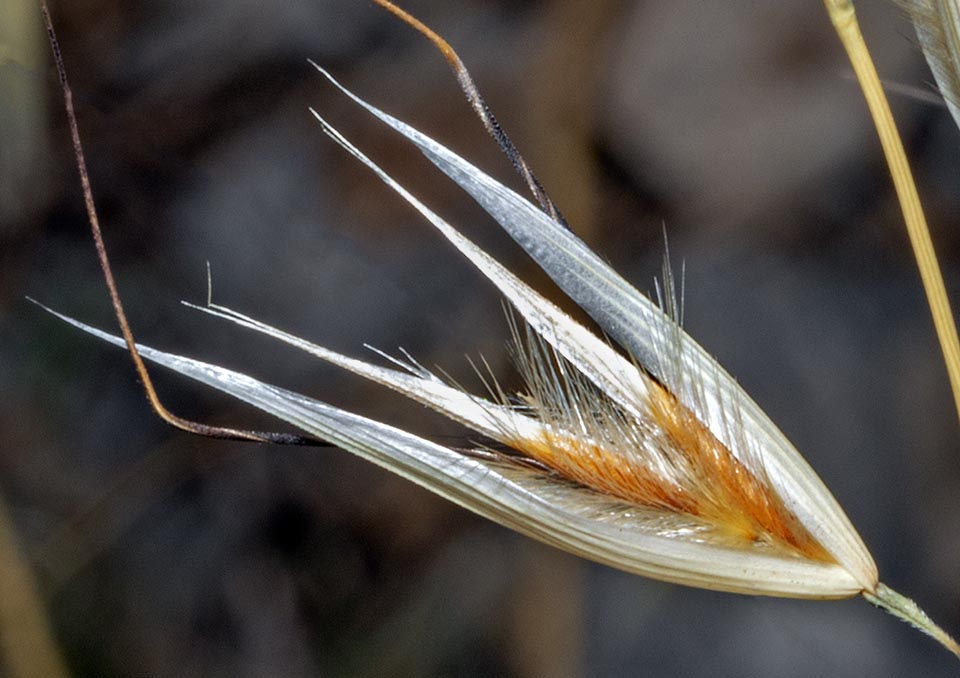 Its preferred habitats are the open ones, sunny and with calcareous and arid soils, although the species is  present also on siliceous substrata with neutral pH. The species is frequent in meadows, in fallows or in cultivated fields from 0 to 1200 m of altitude.

From the phytosociological point of view the species takes part in infesting communities of the class Stellarietea mediae, inside which the aspects of nitrophilous annual vegetation typical to the anthropized environments. In particular, the species is considered characteristic of the alliance Echio plantaginei-Galactition tomentosae, that includes sub-nitrophilous annual communities of medium size, diffused in the western Mediterranean.

The seeds of Avena barbata are edible, although the species is only rarely cultivated if compared to the Oat (Avena sativa L.) and mostly as forage cultivation.