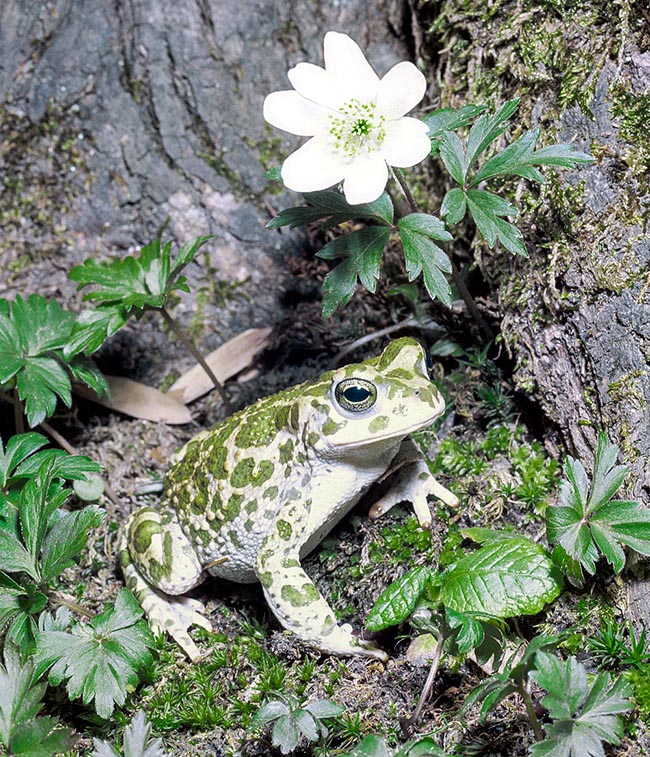 The Emerald toad (Bufotes viridis) has a vast home range covering all continental Europe from Span and north-eastern Italy up to Russia, then Asia from Kazakhstan to eastern Siberia up to North America © Giuseppe Mazza

The Emerald toad  (Bufotes viridis (Laurenti, 1768))  belongs to the class of the  Amphibia, the vertebrates spending part of their vital cycle in the aquatic world, to the order of the  Anura, the tailess amphibians, and to the family of the Bufonidae.

The species is listed in the Appendix II “Strictly protected species” of the 1979 Bern Convention for the Conservation of the wild life and the biotopes in Europe and in the Annex IV of the Habitats Directive (Directive 92/46/CEE). The IUCN Red List as well as its Italian Committee, register this species with the status of “Least Concern LC”.

The name of the genus Bufotes is an alternative to the genus Bufo, in fact until now it has not yet been defined its taxonomicaml position inside the family of the Bufonidae,  and comes from the vulgar Latin “būfo”, in turn from the Greek “βάτραχος” (vátrachos)  = batrachian, term under which were indicated the amphibians, in particular the anurans known as frogs and toads.

The Emerald toad has a vast distribution area covering all continental Europe, from Spain to Russia, and Asia from Kazakhstan to eastern Siberia up to North America.

In Italy is limited to the north-east (Friuli and Venezia Glulia). In the rest of the peninsula is present the Balearic green toad (Bufotes balearicus) from which it differs only genetically.

The Bufotes viridis is one of the most adaptable species in the Palearctic Region and for this reason we can find it in various types of habitats. Forests, prairies, agrosystems, mountain zones, semi-desert and desert areas are all habitats where we can notice the presence of the Emerals toad. However, as it needs humid habitats for the reproductive season, it never goes too far from the waterpoints like sources, ponds, ditches, rivers or lakes.

To hatch the eggs and develop the larvae, it takes advantage of the little deep still or fast flowing waters. It may be found also in anthropized environments such as gardens and orchards. It has no particular needs for what the quality of the water is concerned, it bears a certain level of pollution and of saltiness. Moreover, it has a thermal tolerance up to 40 °C, and during the winter it bears the low temperatures by entering in hibernation into dens or digging in the mud.

Its frame is robust though less stocky and imposing than the Bufo bufo, and reaches at maximum the length of 10 cm, however the parotoid glands on the neck all proportionally more elongated. 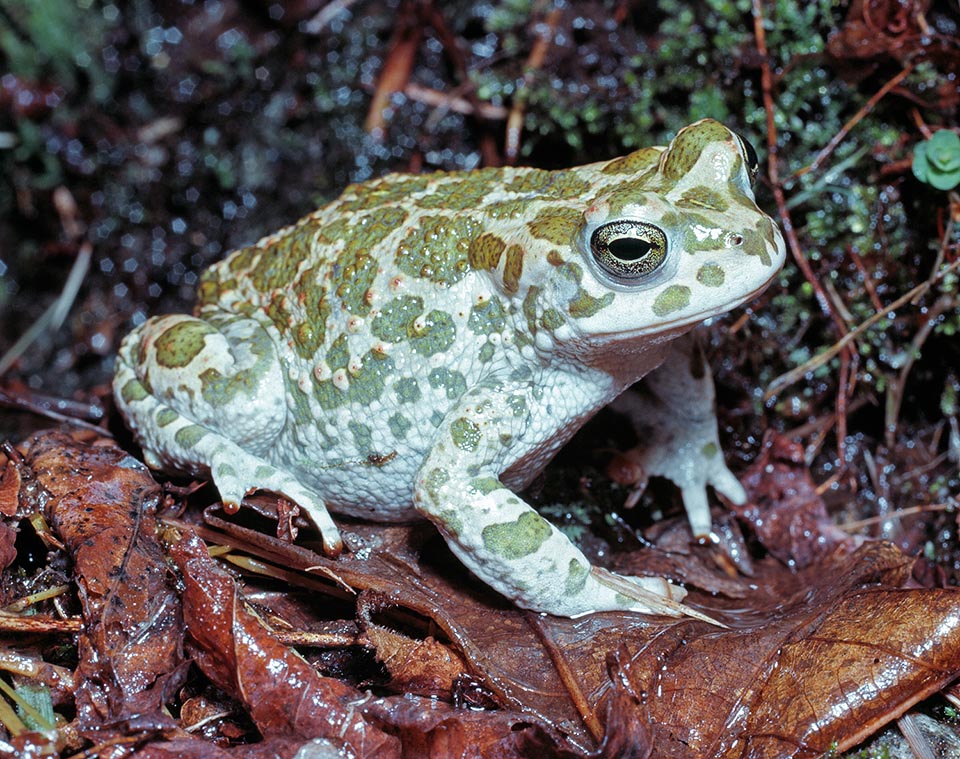 Smaller than Bufo bufo, with elegant emerald dotted livery, it reaches only 10 cm, but the parotoid glands on the neck proportionally are longer © Giuseppe Mazza

It has a colouration varying from brown to white but its name is due to its livery with evident green spots well defined by dark lines, where insert many red small dots. The abdomen has no green spots and usually is whitish with, at most, some dark spots. It has rounded snout with evident yellow-golden eyes and horizontal pupil.

The males have an external vocal sac that during the reproductive season displays a bluish colouration on the throat. Their fore limbs are more robust, the palm of the feet is more extensive and the first inner toe is provided of a tubercle for the reproduction. The sexual dimorphism is evident mainly on the more lively green livery in the females on their major size.

The Emerald toad is actively mostly in the crepuscular and nocturnal bands, and spends the day sheltered in dens in order to maintain the humidity. If the conditions allow it, it is also active during the day.

The species adopts different diets and strategies of feeding depending on the stage and the size it has. The larvae (called also tadpoles) nourish of algal material, organic debris and plankton, mainly rotifers and microcrustaceans. The immature metamorphosized juveniles, prey small invertebrates such as springtails, dipterans, acaras and coleopters. The adult Emerald toads mainly nourish of arachnids, insects and molluscs. An important part of the diet is formed by the ants. The hunting method is defined as “sit and wait” and consists in keeping motionless till when the prey is so near to be seized with the help of the tongue. 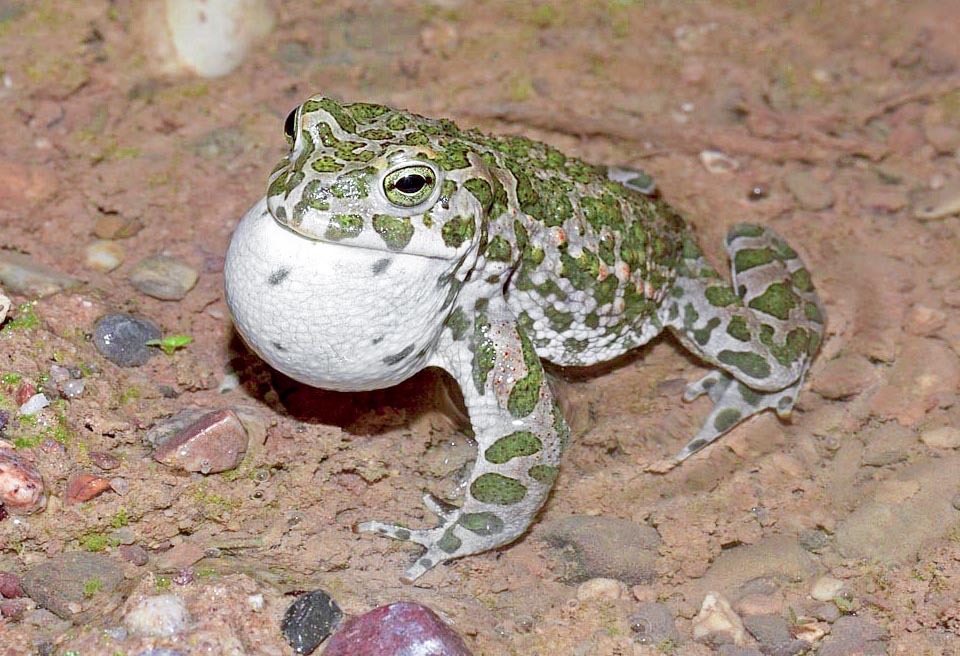 Males join the spawning areas first. In the reproductive time they tend to gather and sing in numerous groups to attract females © Jean-Pierre Vacher

When the Bufotes viridis feels menaced, it secretes a toxic liquid from the parotoid glands having a bad odour  that disturbs the predator, but at time it can also emit defensive cries.

The main predators of the adult toads are the two snakes Natrix natrix and Natrix maura, but among its dangers stand also diurnal as well as nocturnal raptors, wading birds and some mustelids. The tadpoles as well as the eggs are eaten by larvae of odonates, water scorpions, larvae of urodelian amphibians and crustaceans like the Procambarus clarkii.

The reproduction time begins depending on the latitude and the temperature, but usually it occurs around March and lasts a couple of months. The communities utilize every year the same site for the spawning, called spawning areas: shallow water points, temporary or permanent. This allows also the monitoring of the decrease or of the extinction of populations in case births in the site do not happen anymore. For reaching the spawning areas are performed real migrations that at times can reach the 5 km, and during this time the individuals do not feed.

The males are the first to reach the spawning areas and being more numerous than the females, often take place conflicts for the conquest of a partner. 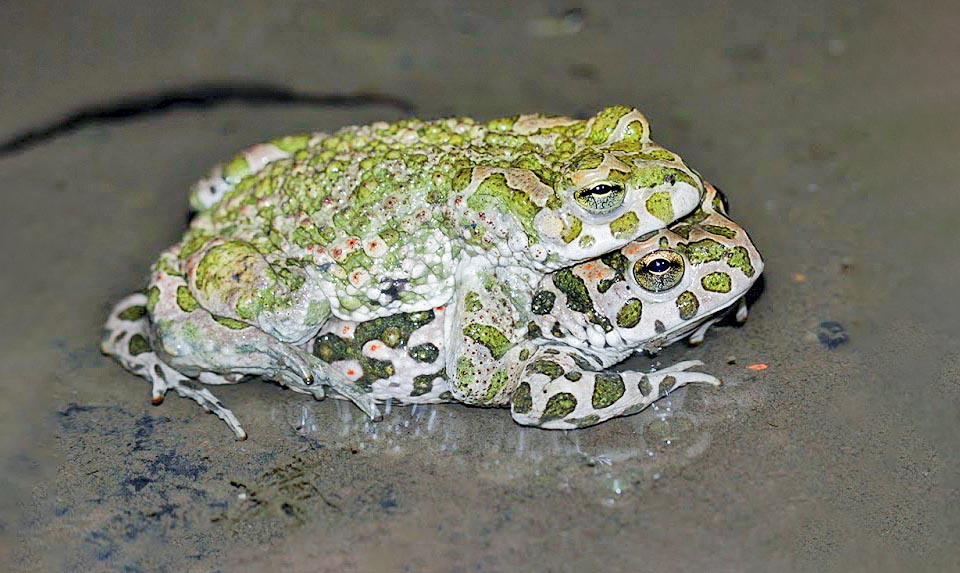 Mating is of axillary type and occurs in water. A female can lay 2000-3000 eggs, arranged in two rows inside gelatinous cords that may even be 7 m long. They are immediately fecundated at the exit by the males who compress the female hips, firmly clung thanks to the special tubercles on the fore toes © Jeroen Speybroeck

The coupling is of axillary type and occurs in water: the male clings firmly on the axillas of the female thanks to the tubercles on the fore toes and facilitates the eggs of its eggs in the female by compressing its hips. While the eggs get out, they are fecundated by the male. As an average, during the mating are laid 2000 eggs and they are arranged in two rows inside gelatinous cords that can be 7 m long. Initially, the cords are rolled up and then clung to plants or submerged obstacles or are left on the bottom.

The duration  of the incubation varies because depending on the temperature of the water, but usually it’s of about 10 days. The just born tadpole is 4 mm long and reches the 50 mm before doing the metamorphosis. They have a uniform black colour with very close eyes. The tail is big if compared with the body and presents a membrane ending in round point. The tadpoles gather close to the banks of the body of water during the day looking for food and during the night they shelter in the depth. The development lasts on base of the food availability and the temperature, from 2 to 3 months, when the tadpoles complete the metamorphosis and become immature juveniles with the appearance of the adults.

The sexual maturity is reached depending on the latitude: in the southern regions it takes place during the second year of life, but going up northwards it is delayed up to the northern regions where it occurs on the fifth year. The average lifespan is for Bufotes viridis of about 14 years.