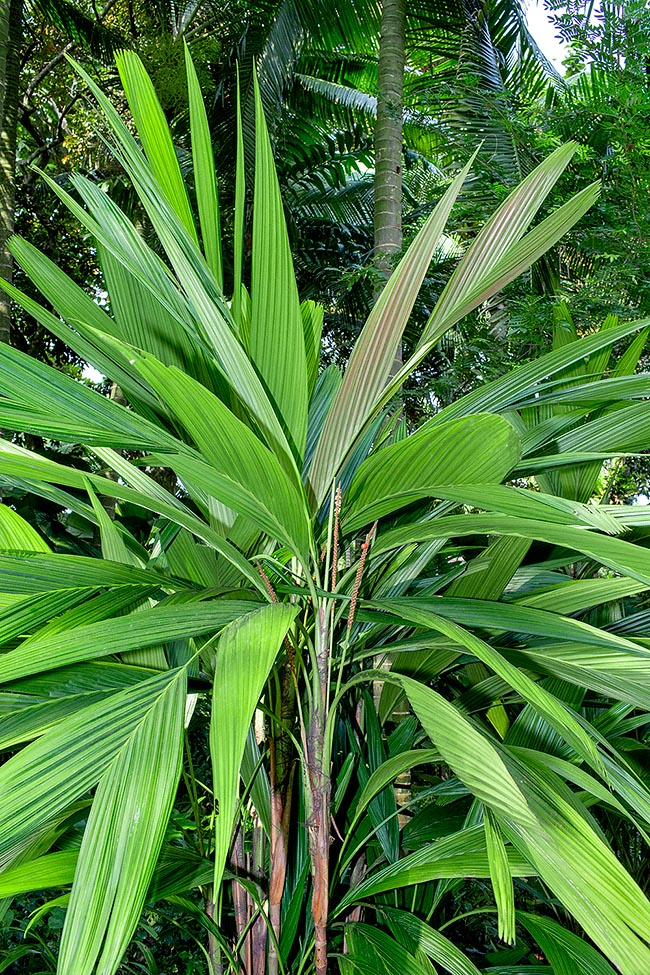 The genus Calyptrocalyx is distributed in Indonesia, Papua New Guinea and Maluku Islands.

The species Calyptrocalyx elegans Becc. (1889) presents an ample distribution area in the rainforests of New Guinea.

The name of the genus Calyptrocalyx comes from the Greek terms “kalyptra” (hat) and “kalux” (calyx), with reference to the modality with which the outermost sepal covers the other ones when the flower is in bud.

The name of the species, elegans, refers in Latin to the grace and lightness of the leaves and of the thin stems.

Calyptrocalyx elegans is a palm quite variable in the shape, most probably because of the vast distribution in the origin sites that has caused its differentiation in variety depending on the different zones.

In any case, the look is multi stemmed, with more thin stems of shape similar to a bamboo cane, of various heights and with new suckers growing at the base. It is quite rare to find specimens with only one stem.

All stems present a pale green foliar sheath with fibres on the margins that continues the petiole and wraps the stem.

The varieties differ from each other in the shape of the leaves.

The first variety has a V-shaped leaf, bifid, that remains always entire. The extremities of the foliar lobes are regularly fringed. The leaves are often rigid with a fleshy consistency. The new emerging leaf is bright red and turns slowly green after the opening. The bush is smaller if compared with the other varieties.

The variety with irregularly pinnate leaves is perhaps the most beautiful. The young leaves are undivided, but while growing, they begin to divide in long segments of different sizes, irregularly spaced along the rachis. The last two big segments are V-shaped. 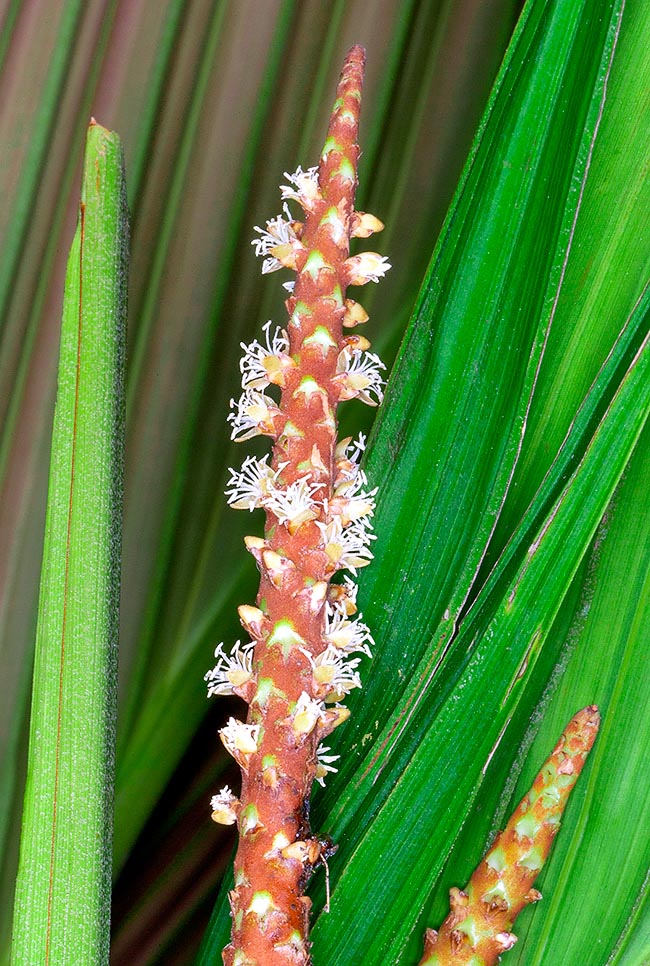 Detail of the inflorescence with male flowers. The about 4 mm petals, enclose 8-10 stamens © Giuseppe Mazza

The extremities of the segments are fringed and appear almost torn out. The leaves are hanging, with fleshy consistency, and display marked veins. The new emerging leaf is red-orange. The bushes have a height variable between 3 and 5 m. This variety is cultivated under the common name “Boalak”.

The third variety has the classical pinnate leaf with uniform and thin segments, long and slightly hanging, grafted on the rachides that often are arc-shaped and project the leaves of the bush in various directions. The last two foliar segments are always V-shaped. The leaves are soft. The new emerging leaf is dark red, but at times turns brown. Its bushes are the biggest among the three varieties.

The inflorescence emerges between the petioles and is formed by one only spike not presenting ramifications, similarly to other species of the genus like in Calyptrocalyx spicatus. It is erect, of variable length, depending on the variety, between 30 cm and 1 m, with acute apex. The inflorescence is initially wrapped by a bract that protects it and that dries up and falls after blooming.

The inflorescence is unisexual, formed by male and female, both on the same plant. The colour of the flowers, perfumed, varies between white and cream.

The female flower is 4 mm long, ovoid, with a big stigma.

The fruit is ellipsoidal, up to 2 cm long and with a diametre up to 1,5 cm, of yellow/green colour turning red when ripe. The mesocarp is moderately fibrous, floury, orange. The endocarp membranous, separated by the seed.

The seed is globular, about 11 mm long, and with a diametre of 7 mm, with homogeneous endosperm.

Calyptrocalyx elegans is one of the most diffused species of the genus and therefore is one of the most cultivated, known as Mara palm or Fireball palm. It is cultivated thanks to the shape and the colour of its leaves in all the subtropical climate belts as garden plant as well as indoor plant due to the contained dimensions of the young specimens. It is in any case a fast-growing species, especially in the bigger species. 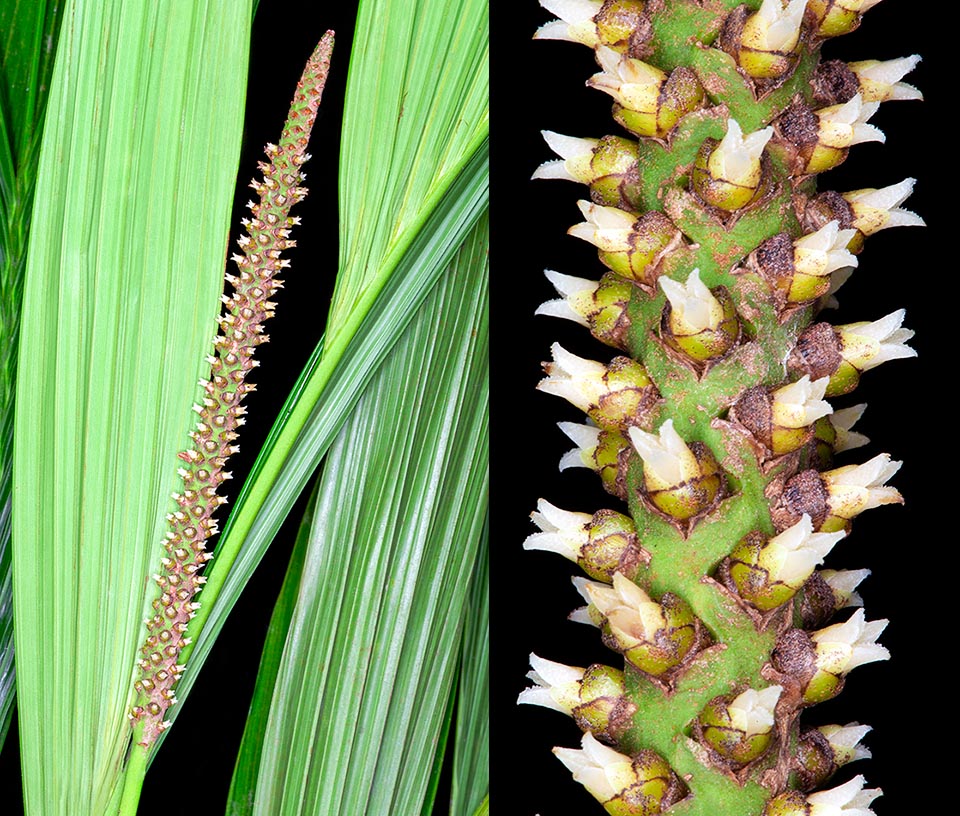 The male and the female flowers are sunken, close, in the same rachis, but get visible in different times. To favour crossed fecundation, initially the spike has only male flowers and then, when they fall, get out the female ones, here shown, of analogous size but ovoid with a big stigma in the centre © Giuseppe Mazza

The conditions for the success in cultivation, outside and also inside, require an exposition sheltered from the rays of sun, the ideal position being a partial or total shade. Calyptrocalyx elegans does not bear the winds, especially the dry ones, that easily burn out its leaves. It prefers fertile soils, rich in humus, not calcareous, constantly humid but very well drained.

Calyptrocalyx elegans must be watered regularly, but does not appreciate the excess in watering, the roots are very sensitive and rot easily. The substratum must be consequently very porous and must be maintained humid without ever allowing it to dry up between the waterings. 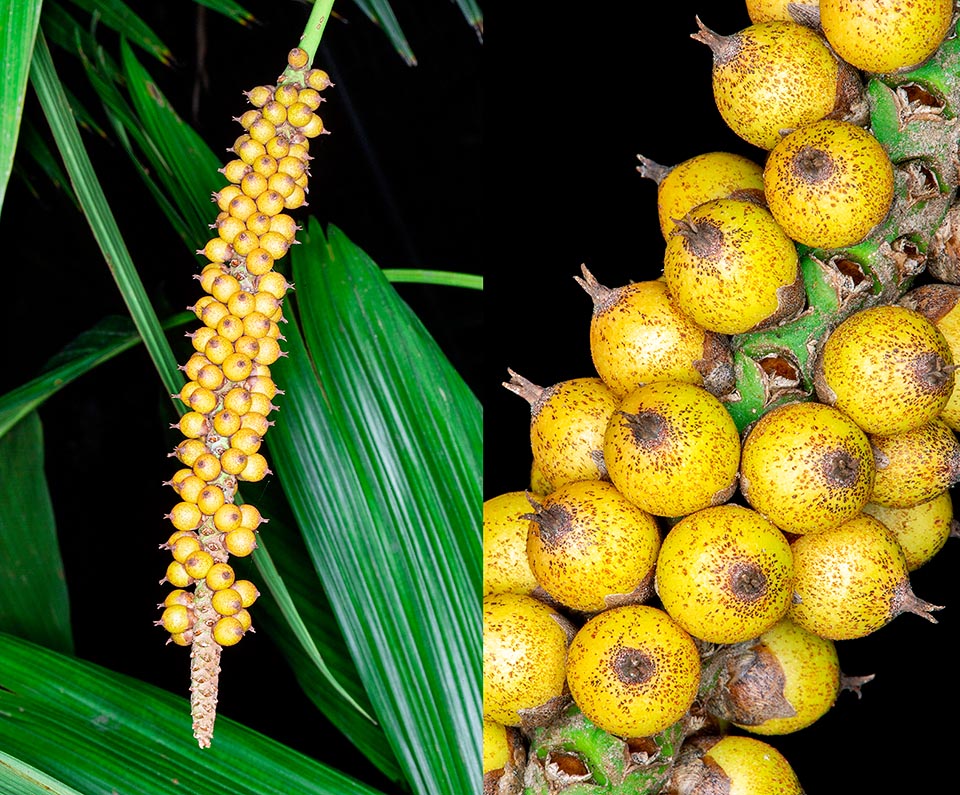 The fruits, red when ripe, are up to 2 cm long. Born for tropics, it’s a fast-growing palm adapting also to warm temperate climates with minima over 5 °C © Giuseppe Mazza

Despite its tropical origin, Calyptrocalyx elegans is considered as the species more resistant to cold of the whole genus. However, it is not capable of surviving the frosts or prolonged cold periods, therefore it can be cultivated only in zones where it never freezes and winters are very mild, with a lowest absolute temperature always over the 5 °C.