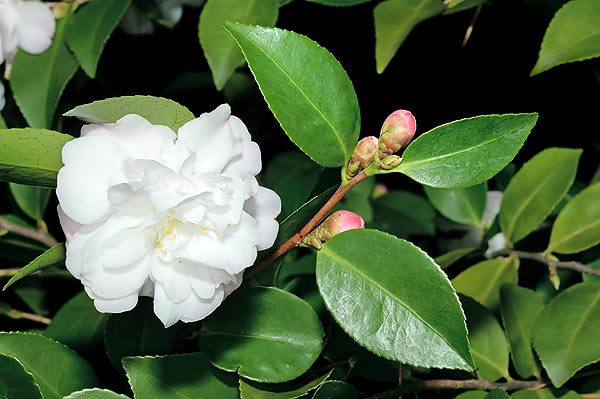 The plant is native to Japan (Kyushu and Ryukyu Islands), where it grows in the coastal evergreen forests, between the 500 m and the 1000 m of altitude.

The genus was honoured by Linnaeus to the Moravian botanist Jesuit missionary, Jiří Josef Kamel (1661-1706), not for having introduced in Europe the camellia, which he did not know, as often is reported, but for his studies on the Philippines flora, which he signed with his Latinized name, Camellus; the name of the species comes from the Japanese name “sazankwa” = flower of the mountain tea.

The Camellia sasanqua Thunb. (1784) is a shrub or a small evergreen tree tall up to about 5 m, with reddish and pubescent young branches and alternate leaves, on a short (0,3-0,5 cm) petiole, oblong or elliptic with indented margin. The foliar lamina is of dark green colour with bluish gradations, coriaceous, 3-6 cm long and 2-3 cm broad, glossy on the upper side with prominent central nervation and tomentose on both sides.

The blooming happens in autumn-winter with sub-terminal flowers, axillary, sessile (without peduncle), of 4 to 7 cm of diameter, with 8-10 green orbicular sepals, pubescent, ciliate on the edges, which detach by the opening of the flower (deciduous); the 5 to 7 petals are obovate or spatulate, of white or red colour, 2-3 cm long and 1,5-2,5 cm broad; the stamina are numerous, apparent, yellow and, finally, the ovary is pubescent, globular and tri-locular. The fruits are obovoid or globular capsules of about 2 cm of diameter, containing 1-2 seeds per loculus. It reproduces by seed, in such case the first blooming takes place by the 4th-5th year of age, by air layering, or, more currently, by cutting. 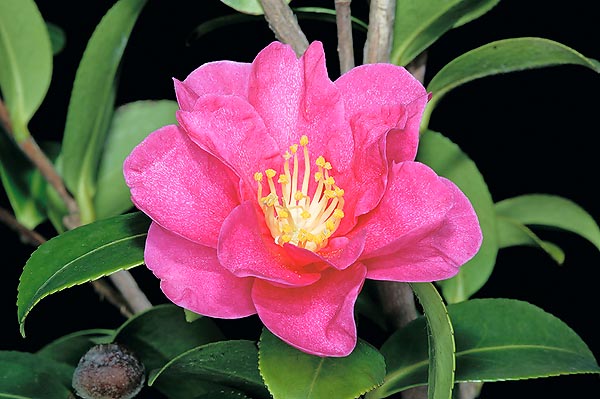 When proceeding by seed, we are never sure that the new plants will be the very same of the mother plant, seen the intrinsic genetic variability of the species; this method is usually utilized by those wishing to get new varieties or hybrids. The reproduction by cutting is done in summer utilizing portions of semi-woody branches, 10-15 cm long, where two apical leaves are left, placed for rooting in a much draining and light soil, formed, for instance, by peaty soil and siliceous sand, or agri-perlite, in equal parts; rooting is rather slow (100-120 days). The plant has originated many varieties and hybrids with simple, double, semi-double and double flowers in several tones of colour, from the white, the pink, the red and even bicolour.

The Camellia sasanqua, due to its strong resistance to the fungal diseases, in particular to the Glomerella cingulata and the Phytophthora cinnamoni, is often utilized as rootstock for others camellias.

Plant of great ornamental and landscape interest both for the blooming, which takes place in a period of the year very poor on this point of view, and for the decorative foliage; the single flowers are short-lasting, but are produced continuously for many weeks and in some varieties for months. It prefers cool and humid climates and is quite resistant to the low temperatures, as low as about -10 °C, and lower in some varieties, even if the flowers may be damaged by the icy winds.

It is not particularly demanding for what the soil is concerned, but prefers the fertile, loose, rich of organic substance, well drained, sub-acid or neutral and kept humid; the best positioning is on a light shade, but may resist also to the full sun is adequately watered; possible pruning may be effected by early spring. The fertilizations, moderate, are to be done by the vegetative restart, utilizing possibly organic manures or at slow release, specific for acidophilous plants. 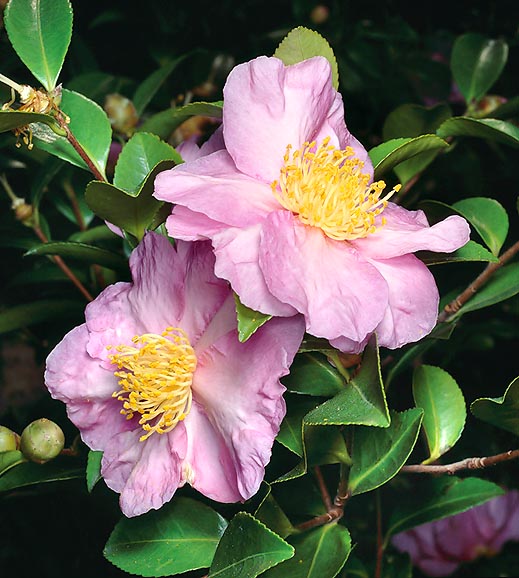 It well adapts to the cultivation in pot, utilizing soils for acidophils with addition, by around the 25%, of siliceous sand or agri-perlite for improving their drainage, keeping in mind that, especially in summer, a constant humidity must be guaranteed; if calcareous water is utilized for the watering, there may be a yellowing of the leaves (ferric chlorosis), in such case it is to be treated with ferrous chelates. It is resistant to diseases and, generally, to the parasites, but the red scales, it is therefore to be periodically controlled in order to allow a quick intervention with specific products.

In Japan, and even more in China, the plant is cultivated for the oil extracted from its seeds, utilized in the cosmetic industry, as lubricant, and, in the past, for the lighting, and also, widely, for alimentary utilization. The oil Is formed for about the 80% by oleic acid and for the 10% by linoleic acid, furthermore, it contains proteins, vitamins A, B, D and E, as well as minerals; it holds antioxidant and anti-bacterial properties. Its leaves are often employed for aromatizing the tea and the wood is utilized for realizing small objects of common use. The date of introduction in Europe is not certain, it is thought to be around the mid of the XIX century, whilst the date of its introduction in England, the 1879, is well known.