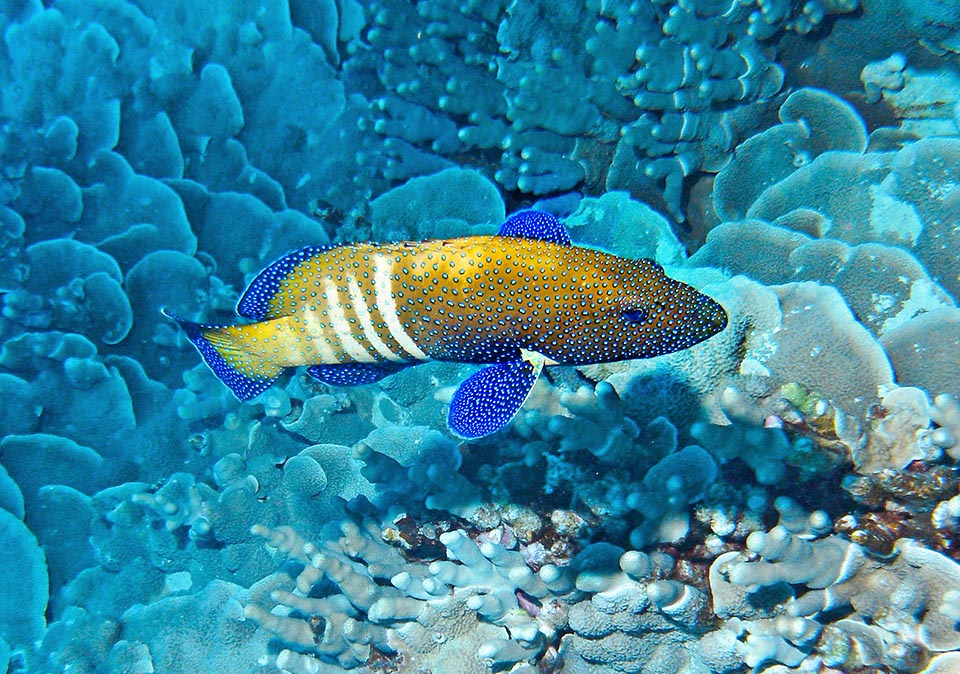 The Peacock hind (Cephalopholis argus Schneider, 1801) belongs to the class of the Actinopterygii, the ray-finned fishes, to the order of the Perciformes and to the family of the Serranidae, that presently counts, in 2021, 70 genera and more than 566 species.

The etymology of the genus Cephalopholis comes from the Greek “kephale” = head and “pholis” = scale, with reference to the fact that the fore part of the snout, up to the nostrils, has no scales, whilst the specific term argus comes, Latinized, from Ἄργος Πανόπτης” (Árgos Panóptēs), that is, “Argus who sees all”, the mythological Greek giant son of Arestor who had two eyes in front and two back, or, after others, more than 100 eyes scattered all over the body. When he was sleeping, he closed only half of them and in this way nothing escaped him because he could see everything.

In this case a clear reference to the countless camouflage ocelli of the livery which, among other things, lead to think, as states the common Italian name, to the peacock: “Peacock grouper” in English, “Cherna pavo real” in Spanish and “Garoupa pavão” in Portuguese and Cernia pavone in Italian. 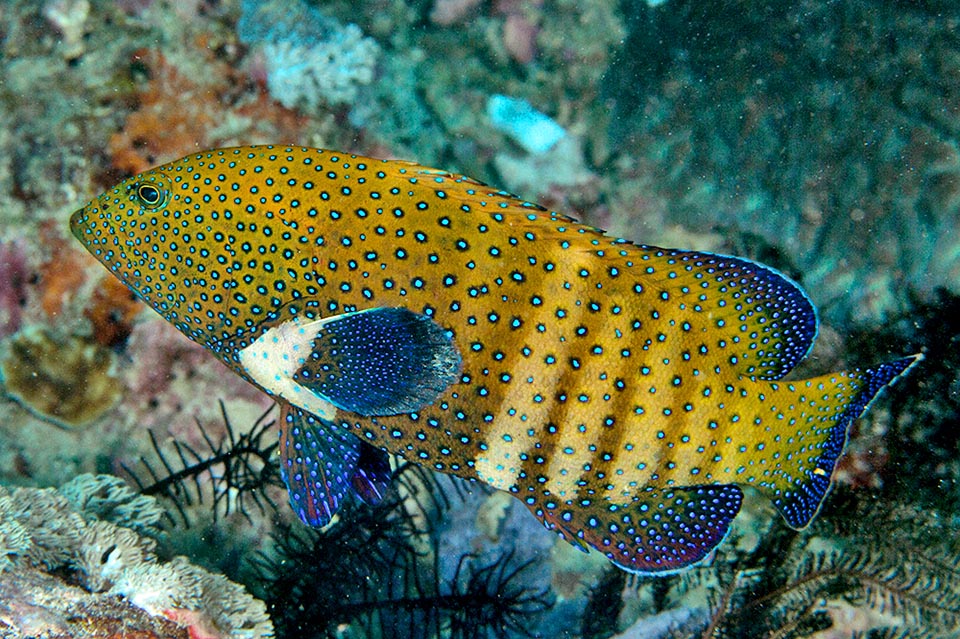 Cephalopholis argus has a very vast diffusion in the tropical waters of the Indian Ocean and of the Pacific Ocean up to the Pitcairn Islands.

Indicatively, starting from the Red Sea and the Gulf of Aden, we find it along all African coast up to South Africa. It is present in Madagascar and adjacent islands of Mayotte, Comoros, Réunion, Mauritius and Rodrigues, then in the Seychelles, in the Chagos Archipelago and in the Maldives. It is frequent along the coasts of India and of Sri Lanka, we find it in Bangladesh, Myanmar, Thailand, Andaman Islands, Malaysia, Cocos Islands, Christmas Island, Indonesia, Timor-Leste, Papua New Guinea and Australia. Northwards, after Palau, Philippines and Vietnam, it reaches Taiwan, China, and Ryukyu and Ogasawara islands and the southern part of Japan. 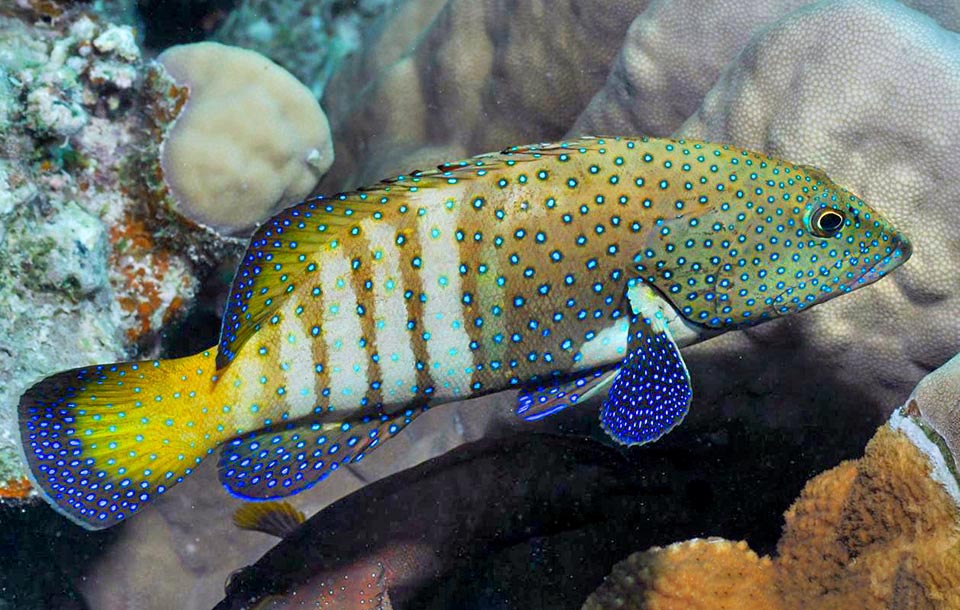 Rarely exceeds 40 cm, quite modest size if we consider that in the tropics go swimming groupers of 3 m and 400 kg © Rick Stuart-Smith, Reef Life Survey

Southwards, after the Solomon Sea and the Coral Sea, it reaches New Caledonia and Lord Howe. Eastwards, it has colonized the islands Fiji, Samoa, Tonga and Cook and all Polynesia and Kiribati up to, rightly, the Pitcairn Islands.

To the divers’ enjoyment, it has been introduced in Hawaii, where it also predates poisoned fishes and its flesh gets consequently at risk of ciguatera, a serious food poisoning.

In these islands, having no competitors, it has reproduced to such a point that its biomass now exceeds that of all other local predators altogether, threatening the fragile endemisms of the autochthonous species and in the long run the entire ecosystem. The most frequent preys, for instance, are the multicoloured parrotfishes and other herbivores that keep alive the madrepores by cleaning them from the infesting algae. 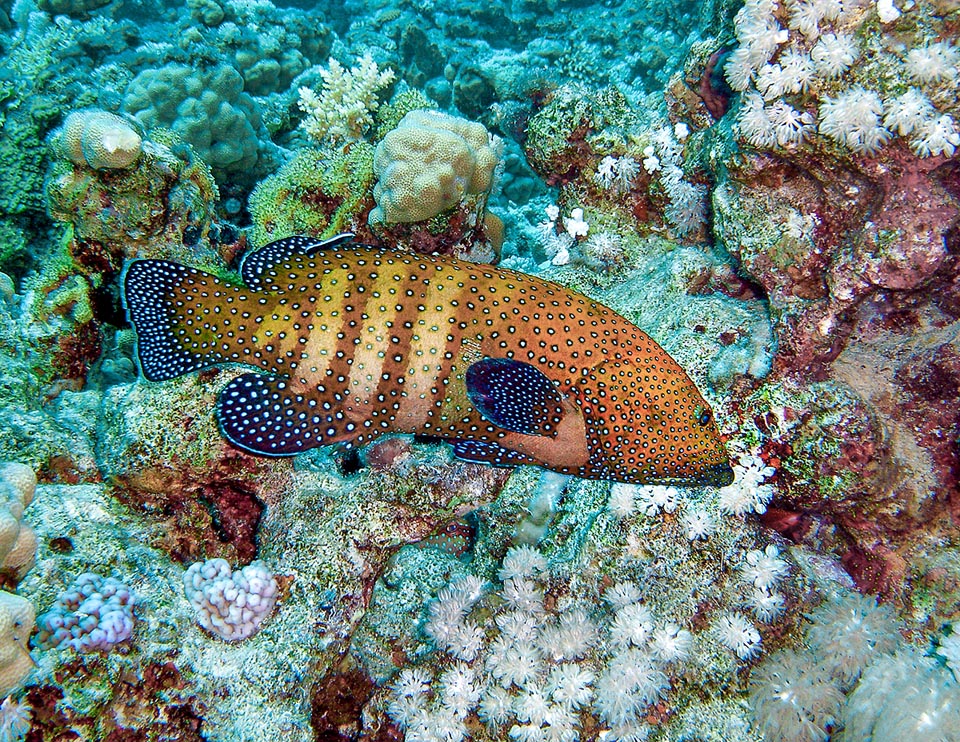 It eats almost exclusively fish and some crustaceans. In the Red Sea it hunts early morning or in the evening, whilst in Madagascar it has night habits. Recklessly introduced in Hawaii for sport fishing, it now exceeds in biomass that of all other local predators put together, thus threatening the fragile endemisms of the ecosystem © Carlos Faria

The Peacock hind is an isolated and territorial species that goes hunting on the bottom. Benthic and benthopelagic, it is found in various environments, mainly in shallow waters between 1 and 10 m of depth, but also on the outer side of the reefs at more than 40 m. The juveniles grow sheltered by ramified corals or in the seagrass meadows.

The dominant males own a hunting ground that may reach 2000 m². They only let a few females in, at most a dozen, assigning a sector to each one. Every day the “Rè”, as they call it in Hawaii, visits them all, one by one. 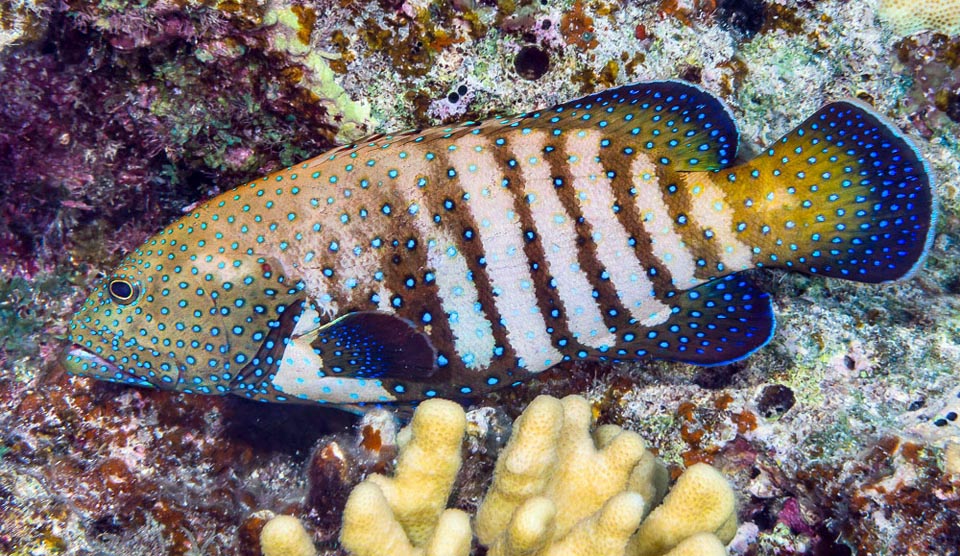 These ones get out immediately from their hiding place for paying homage to it, waving gaily a clear livery, that, in the visual language of these fishes means submission.

Also the arguments between neighbouring males often resolve through visual signals. In fact, to resolve a dispute, they place one perpendicular to the other, to see each other well on the side and show the competitor their strength through rapid changes in colour: the winner is the one who gets the bigger contrast between the background colour of the body, that becomes black, and the changeable clear vertical bands.

After several attempts if the difference is evident the weaker competitor gets away turning pale, but when the visual duel ends in a draw, then the fight gets real, with open wide mouths. 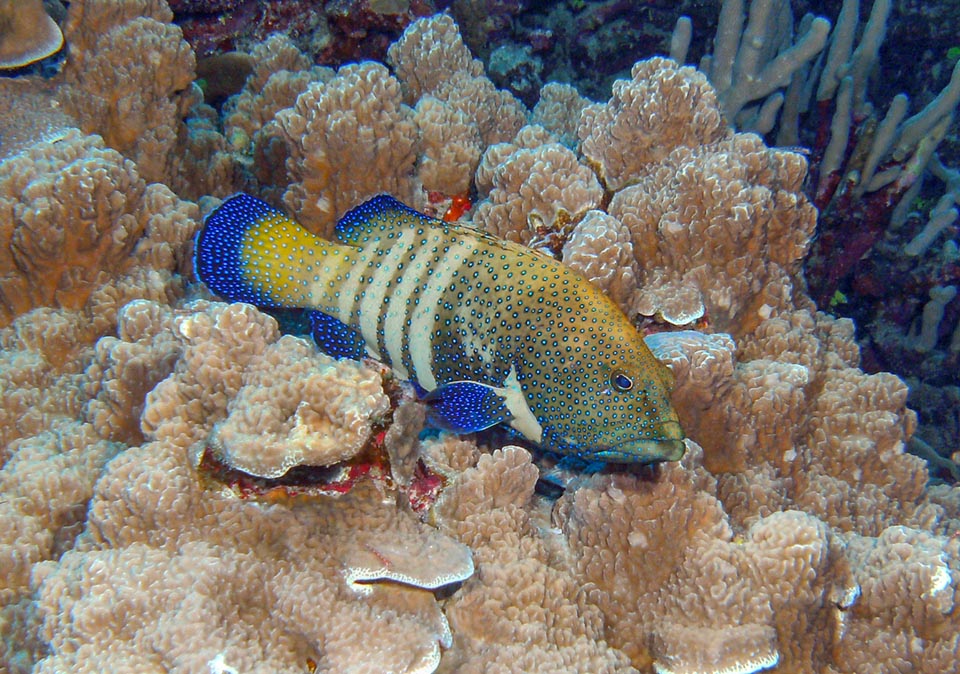 Many fishes may change instantly their colour, but here the rapid changes of livery are also a precise language destined to the conspecifics © Barry Fackler

Cephalopholis argus can reach the length of 60 cm, even if it rarely exceeds 40 cm. Relatively modest dimensions if we consider that in the Mediterranean Epinephelus marginatus and Mycteroperca rubra reach even 140 cm and that in the tropics there are groupers of 3 m and 400 kg.

The slender body has the characteristic look of the Serranidae, with the lower jaw longer and a big mouth armed by numerous rows of teeth, hooked and caniniform for holding the prey. There is only one large dorsal fin with 9 spiny rays, often bent, and 15-17 soft rays, the pelvic are short and the caudal fin is big and rounded, as well as the pectoral ones that count 16-18 soft rays. 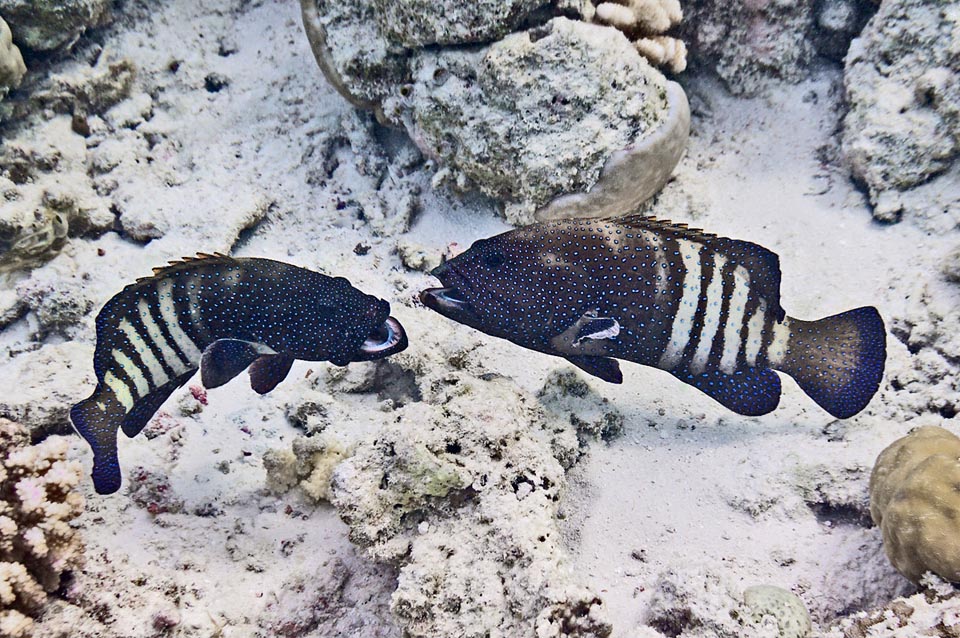 The wedding signal is an all black livery with drawing of a white keyhole at the centre, and for the territorial disputes the competitors show the rival their strength increasing the contrast between the black body and the white vertical bands. Only when, like here, the visual fight ends in a draw, the fight gets real with wide open mouths © Nikolai Vladimirov

The ocelli, turquoise blue circled in black, stand out against the background brown colour or the intense blue of the fins. At the base of the pectoral fins we note a vast clear spot towards the chest. In the second half of the body then stand 5-6 vertical beige bands, more or less marked for mimetic reasons and depending on the mood of the fish, as we have seen in the visual fight. By night, they disappear completely and the livery becomes uniform like the starry sky: dark brown with blue ocelli.

The Peacock hind nourishes almost exclusively of fishes and of some crustaceans. In the Red Sea, it goes hunting early in the morning or in the evening, whilst in Madagascar it has nocturnal habits. 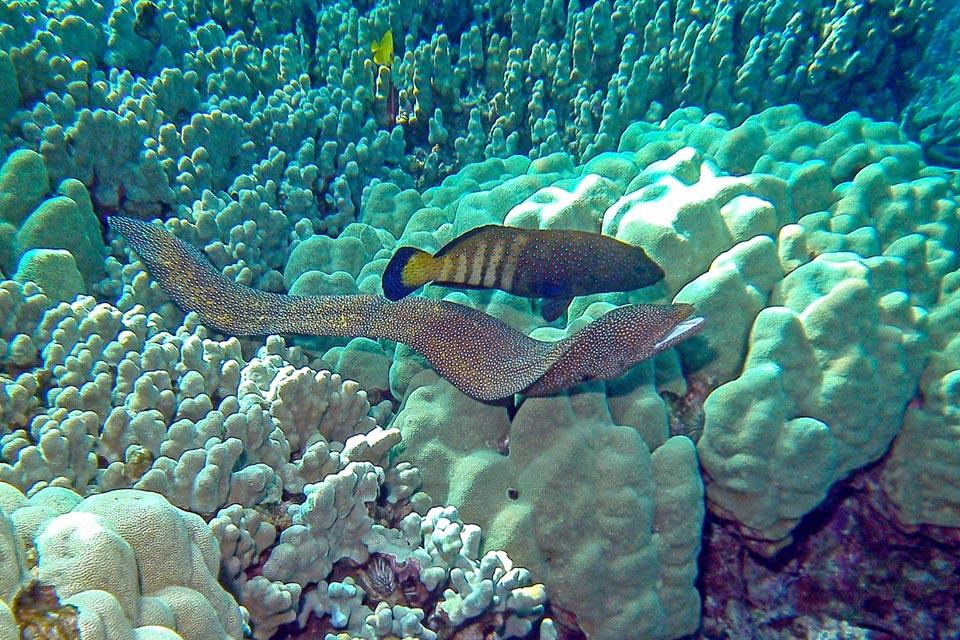 Beware those two! Cephalopholis argus watches the morays and often follows them when they go hunting because their presence drives out the fishes hidden in the madrepores. These run away in terror to save themselves, but often end up, almost without realizing it, into to the no less greedy grouper’s mouth © Barry Fackler

In Hawaii the most frequent preys are the parrotfishes (Scaridae), but it often nourishes also of surgeonfishes (Acanthuridae), filefishes (Monacanthidae) and butterflyfishes (Chaetodontidae).

It hunts in ambush emerging from a shaded area, surprises the victims hidden behind dense schools and often follows the moray eels when they go out hunting because they drive out the fishes sheltered by the madrepores. As soon as they see them arriving, the fishes run away terrorized to finish, believing themselves safe, in the mouth of the grouper.

Cephalopholis argus is a protogynous hermaphrodite species, with adult females that can transform in male.

Also courtship provides a precise chromatic message. The body of the pretender becomes completely black with a white spot at the centre shaped like a lock, and if the partner replies in the same way the couple rises to the surface to entrust the gametes to the currents. 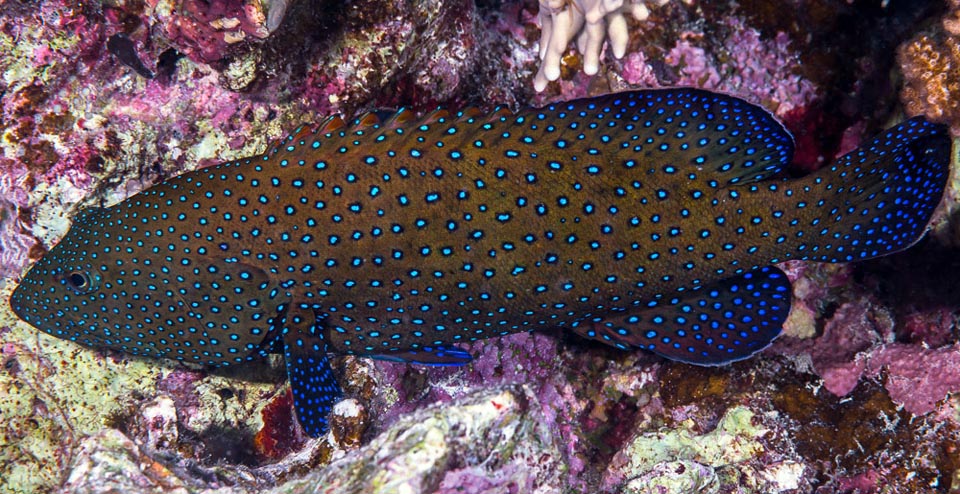 An adult in his elegant and mimetic night livery © Francois Libert 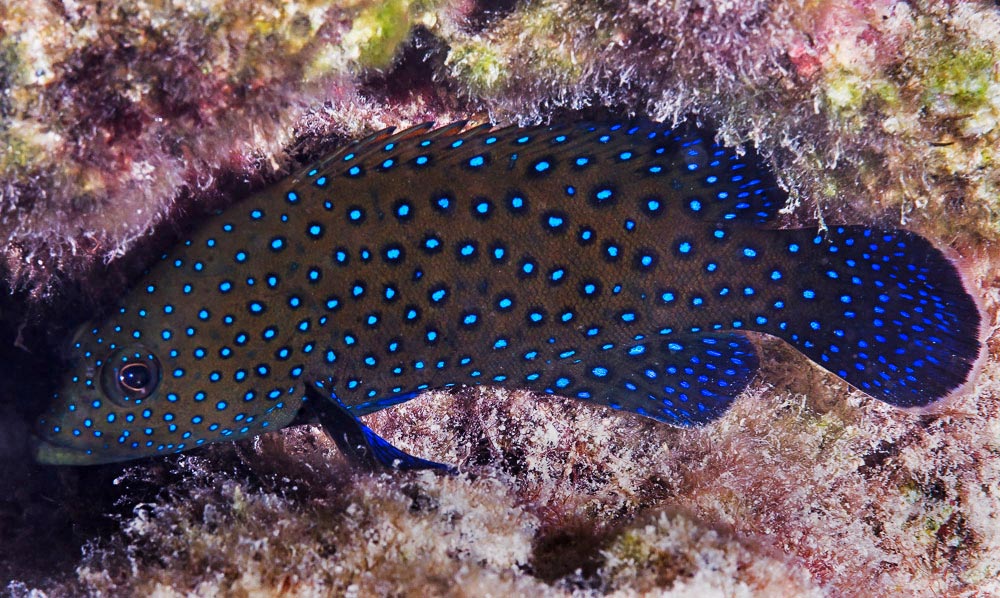 Juveniles are similar. In both instances it is like a starry sky: dark brown with blue ocelli © Francois Libert

The eggs hatch quickly and also the pelagic larvae and the young grow up fast with a life expectancy of 40 years.

The Peacock hind could easily live in an aquarium, but seeing its voracity and the dimensions, is suitable only for the large pools of the public aquaria with compatible fishes.

The resilience of the species is relatively good for a grouper, all fishes in danger. In fact, the populations of Cephalopholis argus can double their membres in 1,4-4,4 years and the vulnerability index marks 49 on a scale of 100.