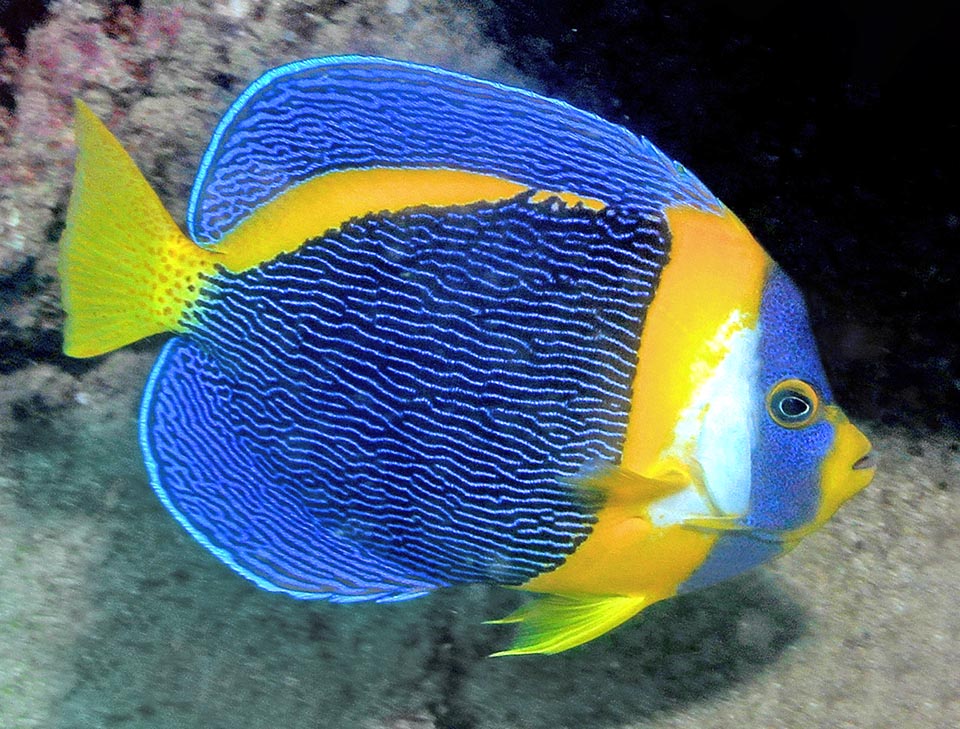 The Chaetodontoplus duboulayi (Günther, 1867), at times vulgarly known as Scribbled angelfish, belongs to the class of the Actinopterygii, the ray-finned fishes, to the order of the Perciformes and to the family of the Pomacanthidae, the one dedicated to the Angelfishes, counting 8 genera and almost one hundred species. Often multi-coloured fishes that hover majestically, but with a long spine looking a dagger at the base of the operculum.

In fact, it is not by chance that the name of the genus Chaetodontoplus comes from the Greek “χαίτη” (kaite) = hairs and “ὀδών” = (odon) = tooth, the same root as of the genus Chaetodon, that of the frail Butterflyfishes with the “Bristle shaped teeth”, with the addition of “ὅπλον” (òplon)  = shield, because of the presence of the showy defensive tail facing the it. The specific name duboulayi, honours the memory of A. H. du Bougay, naturalist, researcher of the Australian fauna.

The Scribbled angelfish lives in the tropical waters of western Pacific. Starting from the Australian Great Barrier Reef, we find it, northwards, in Papua New Guinea, Indonesia and Taiwan. It is discussed on its presence in Vietnam and Lord Howe Island marks its southern limit.

It is a non-migratory species associated with rocks and corals, in sheltered areas on the inner side of the reefs. It is usually found at 5-20 m of depth on soft bottoms, rich in rubble with ravines where to hide, possibly covered by filamentous weeds, sponges and tunicates it eats. 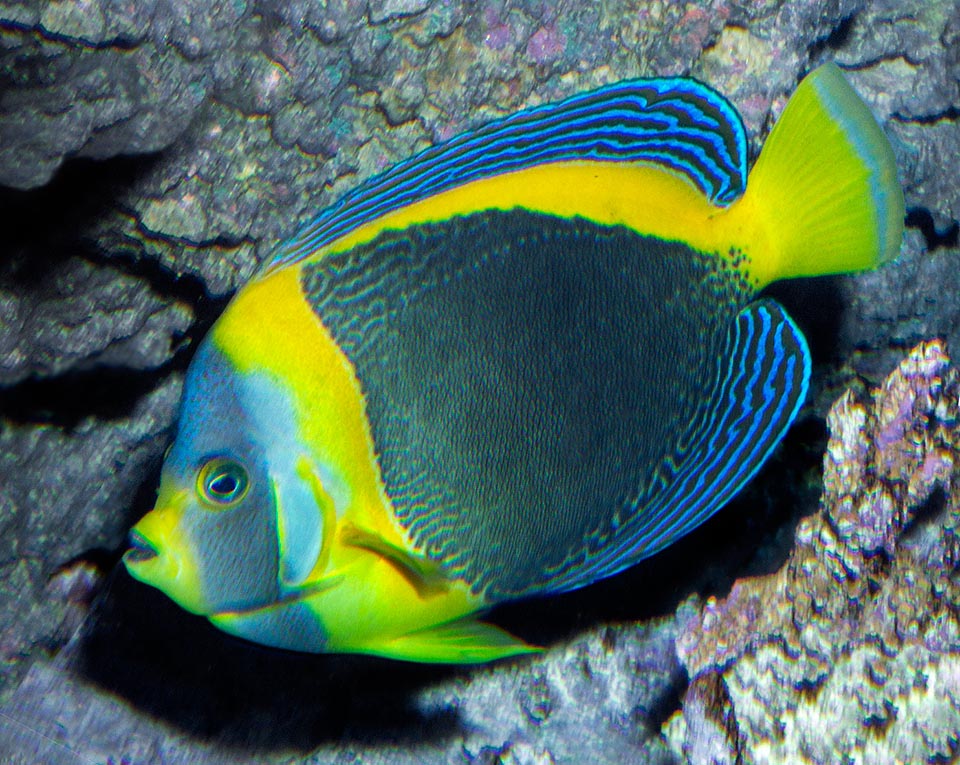 The Scribbled angelfish is a proterogynous hermaphrodite species, that is with females turning males while growing. Hence these are smaller and roundish like juveniles. The body fine turquoise hatchings are almost absent, covered by grey bluish patina accentuating towards the tail. The caudal fin has rounded edges © Giuseppe Mazza

Chaetodontoplus duboulayi has the body very compressed laterally, with almost rectangular outline when the fins are stretched, like the Chaetodontoplus septentrionalis who uses analogous colours for its arabesques and for the mimetic hatchings.

The profile of the head, with sloping forehead, is slightly concave. The mouth is small, protractile, with fleshy lips and tiny teeth similar to small brushes.

There is a slight dimorphism but it is not always easy to determine the sex because, it is a hermpahrodite proterogynous species, with females who, while growing, may become males and so display intermediate liveries.

Conversely, in the females the caudal fin has roundish borders and on the body, apart the two big fins, the fine turquoise hatchings are almost absent being covered by a grey-bluish patina that gets accentuated towards the tail. The profile of the body is more roundish, as is in the young who, in the first times, are black with yellow snout and tail, like the border of the contiguous fins, and display a wide vertical belt of analogous colour centred in the operculum. 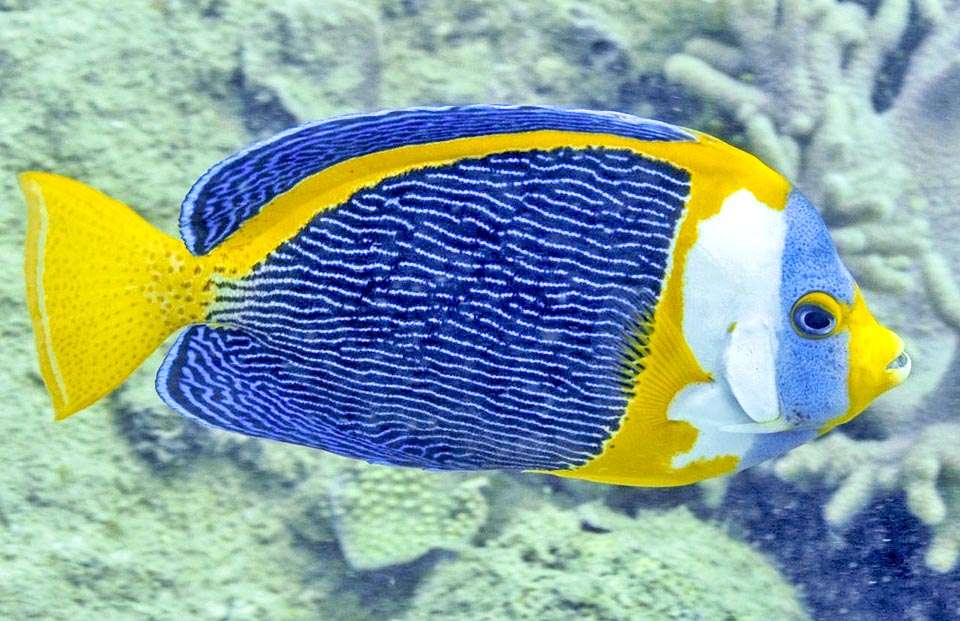 It’s not an endangered species, but little suitable for home aquaria due to the size and the poor resistance to very frequent diseases, like those caused by Oodinium © Rick Stuart-Smith, Reef Life Survey

The Chaetodontoplus duboulayi lives isolated, in couples or in small schools, usually the males have their own small territory close to home with some females. When one of these is ready to spawn, usually by the evening while the predators of eggs are sleeping, the male flaunts its presence, swimming close to her with stretched fins. Then, both go up, swimming spirally, to the surface where the fecundation takes place. The eggs, laid by thousands, measure less than one millimeter and are entrusted to the currents. They hatch, in often faraway places, after 15-20 hours.

Thanks to its beauty, the Scribbled angelfish is very much required by the aquarists and nurseries do exist. It is not well known if they reproduce it or if they limit to grow up in big pools the larvae fished on the high seas.

Even if presently (2020), it is not an endangered species, it is however poorly suitable for the domestic walls, due to the dimensions, the feeding requirements, the poor resistance to diseases frequent in the aquaria, like that caused by the Oodinium, a dinoflagellate covering the aquarium fishes with small white dots, and the intolerance, ad in this instance, to the copper salts used to cure it. It needs large pools with many shelters and well implanted, as those of the great public aquaria that know how to feed them and check every day the parametres of the water.

The resilience of the species is mediocre, with a possible doubling of the populations in 1,4-4,4 years, and the vulnerability index marks presently 39 on a scale of 100.