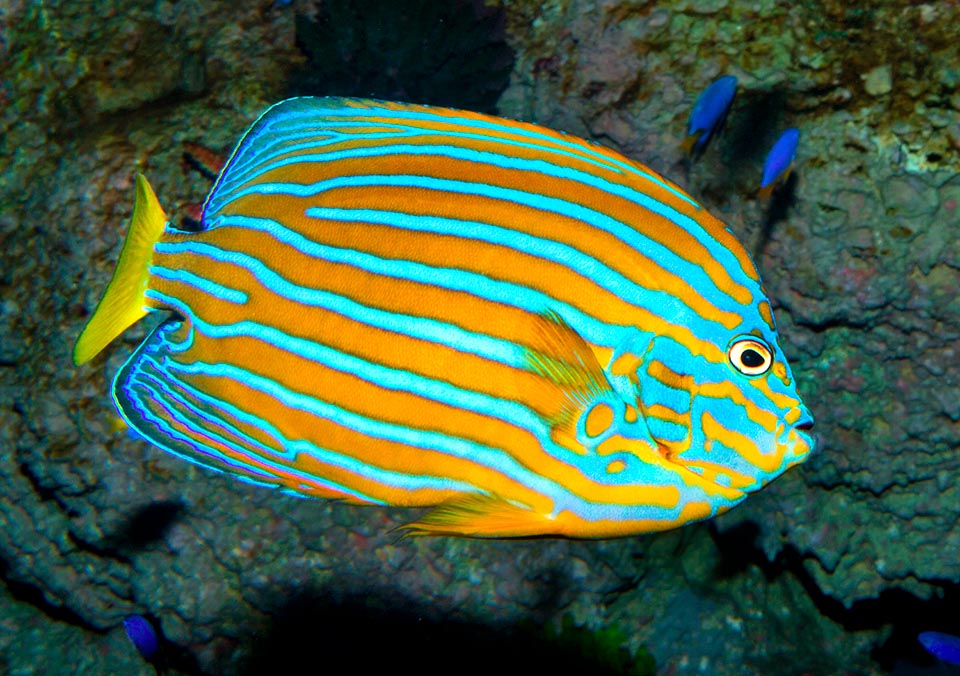 Chaetodontoplus septentrionalis is present only in the northern part of West Pacific, where it can be 22 cm long © Giuseppe Mazza

The  Chaetodontoplus septentrionalis (Temminck & Schlegel, 1844), vulgarly known as Bluestriped angelfish, belongs to the class of Actinopterygii, the ray-finned fishes, to the order of Perciformes,  and to the family of Pomacanthidae,  the one dedicated to the Angelfishes, counting 8 genera and almost hundred species, that have a maybe angelic appearance but with a long and prickly opercular spine.

In fact, it is not surprising that the name of the genus Chaetodontoplus comes from the Greek “χαίτη” (kaite) = hairs and “ὀδών” = (odon) = tooth, the same root as the Chaetodon, the colourful Butterflyfishes, with the “bristle-like teeth”, but with the addiction of “ὅπλον” (òplon) = shield, due to the presence of this showy defensive spine.

The name of the species septentrionalis, evokes in Latin its geographic location, seen that the Chaetodontoplus septentrionalis is present only in the northern part of West Pacific. 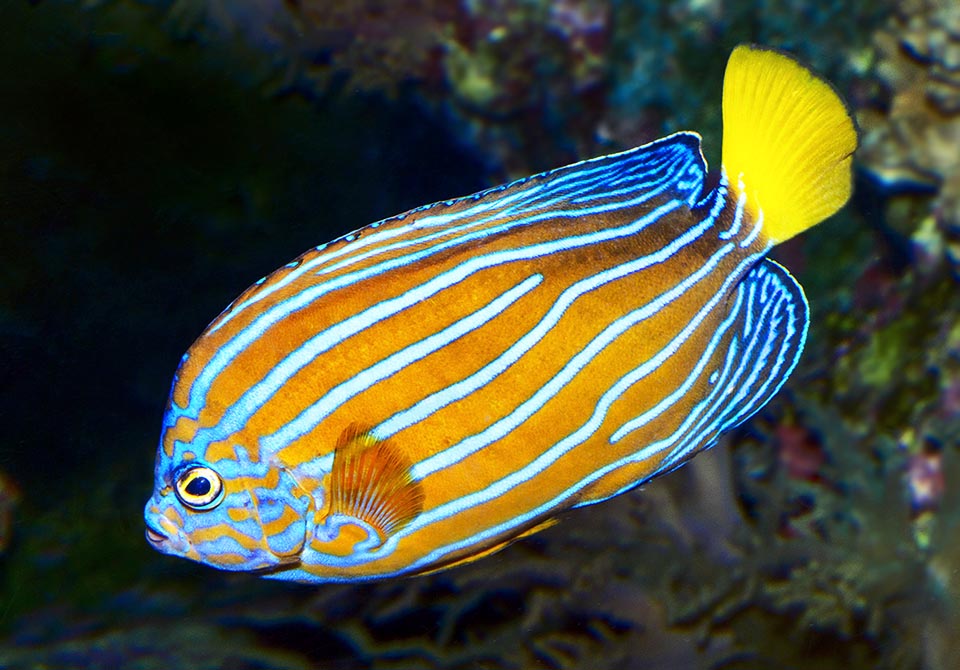 The Bluestriped angelfish is found, starting from Malaysia, along the coasts of Thailand, Cambodia, Vietnam, China, Taiwan, the Ryukyu and Ogasawara Islands, up to South Korea and Japan.

It is not a migratory species, associated with reefs and madreporic formations, swimming usually between 5 and 20 m of depth.

It can reach the length of 22 cm. The profile of the body, very compressed laterally, and almost rectangular with the fins stretched, recalls that of the Butterflyfishes, but the snout is much shorter with solid lips and protractile mouth. 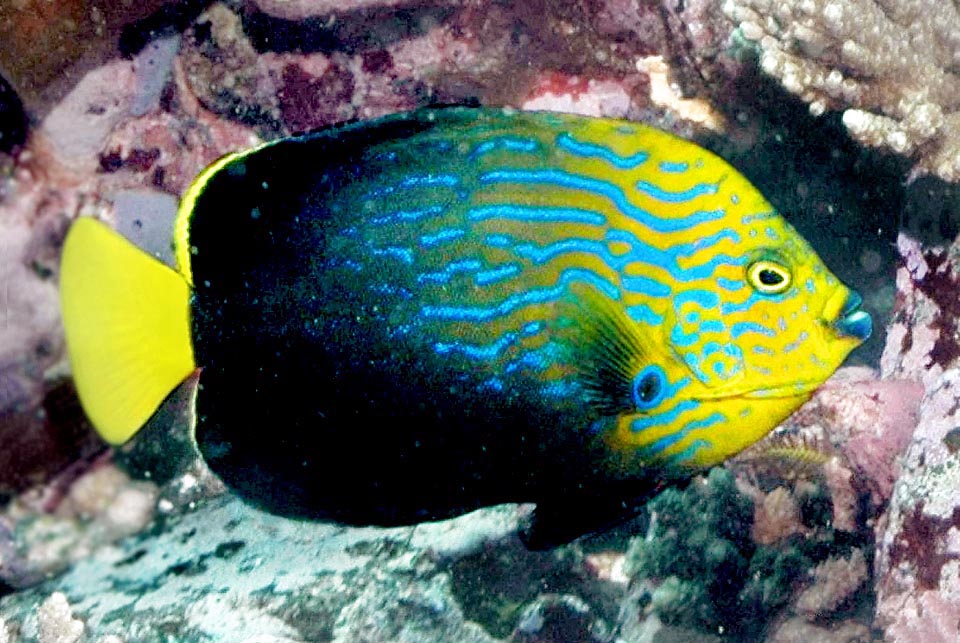 The juveniles of the Chaetodontoplus septentrionalis are completely different. Initially they are black with the back fins bordered by yellow and a vertical yellow belt behind the head. Then, starting from head, can be noted blue lines on yellowish background and progressively assume the final livery while the caudal translucent fin turns yellow © Graham Edgar, Reef Life Survey

Spring immediately to the eye the 7-8 horizontal pale blue lines on brown-orange background, a bit like in the Pomacanthus annularis, that, however, is a species almost bigger than the double, with curved lines and a characteristic ring-like drawing on the upper part of the body. On the big dorsal and anal fins, almost symmetrical, the blue lines get thocker, almost craeting  some arabesques on a dark background. They are stretched by the males during the nuptial parade or for increasing the size suddenly, when the fish feels in danger and wants to discourage the predators, whilst the luminous yellow caudal fin, by swaying, diverts the attention from the head.

Young are completely different. Initially, they are black with the rear fins bordered by yellow and one vertical yellow belt behind the head, then, starting from the head, they progressively assume the final livery while the caudal translucent fin turns yellow. 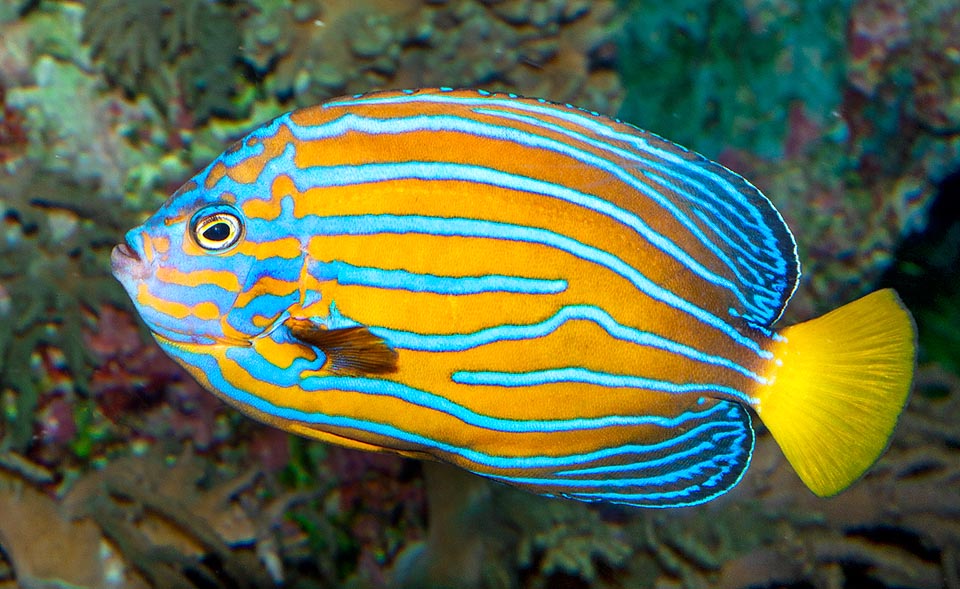 Even if it is not an endangered species, it is nonetheless a fish not suitable for domestic walls: difficult to feed, it often kills the living corals of the tank by nibbling them with hunger and is subject to diseases. It should be left in its world or most exposed in public aquariums that know how to feed it and control the parameters of the water © Giuseppe Mazza

After the courting ritual, with the male swimming with stretched fins, lying on the side, horizontally, at times, lying down on the bottom, the fecundated eggs are entrusted to the currents.

Because of its beauty, it is a fish much required by the aquarists, so much that in Taiwan it is bred for export. It is not known if they succeed in reproducing it, or if, as probable, they wait to grow up in large pools the larvae collected in the open sea. Even if it is not an endangered species, it is however not suitable for the domestic walls: difficult to feed, nibbling them for hunger, the living corals of the pool and is easily subject to diseases. It needs large pools with many shelters and therefore it is a fish suitable only for the public aquaria.

The resilience of the species is mediocre, with a possible doubling of the populations decimated by the events, presently, in 2020, but the vulnerability index is moderate, marking just 25 on a scale of 100.