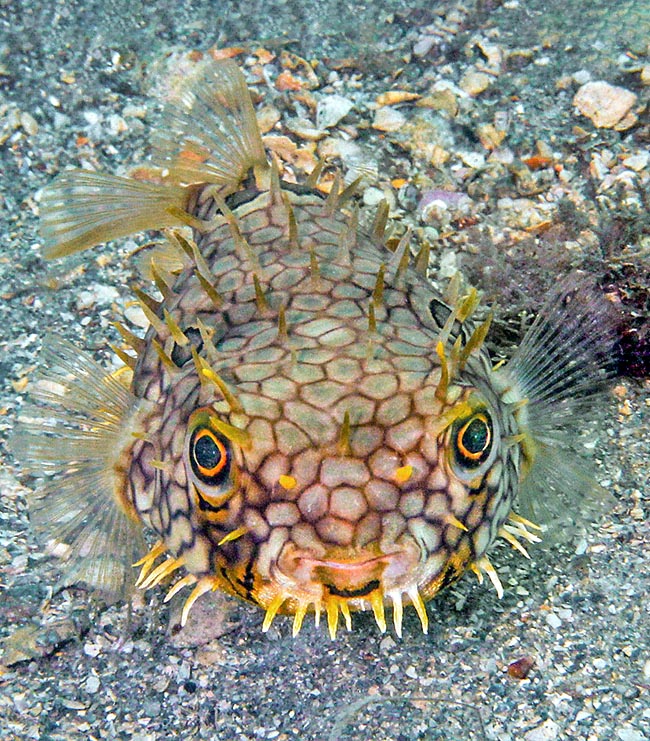 Present in East Florida and in the Bahamas, the Web burrfish reaches Venezuela and northern Brazil © Kevin Bryant

Chilomycterus antillarum Jordan & Rutter, 1897, known also as Web burrfish, belongs to the class of the Actinopterygii, the ray-finned fishes, to the order of the Tetraodontiformes, characterized mostly by scales transformed in protective plates like the triggerfishes, well evident in the sparkling Xanthichthys mento, or in spines, like here, in the family of the Diodontidae, that presently counts 7 genera and 18 species (2021).

Together with the Tetraodontidae they form the known group of the pufferfishes, family, this one, much more numerous with 28 genera and 202 species with thinner spines, visible only when the animal swells, upset, to discourage the predators.  The Tetraodontidae, moreover, have reduced their denture to four close incisors, two per jaw, whilst in the Diodontidae they have completely merged, over and under, and, as is well indicated by the scientific name, have therefore only two teeth. In any case, however, they are not used for chewing and form a sort of a beak.

The name of the genus Chilomycterus comes from the ancient Greek “χεῖλος” (cheilos) = lip and “μυκτερος” (mykteros)  = hooked nose, due to the upper lip of this fish, similar as profile to an arched nose, whilst the specific term antillarum, in Latin of the Antilles, indicates the area where it lives.

Linked to madreporic environments, it is often found on the detrital sandy bottoms at times near algae and seagrass meadows. It is a nocturnal animal that usually does not go deeper than 25 m of depth, even if it has been sighted at 44 m. 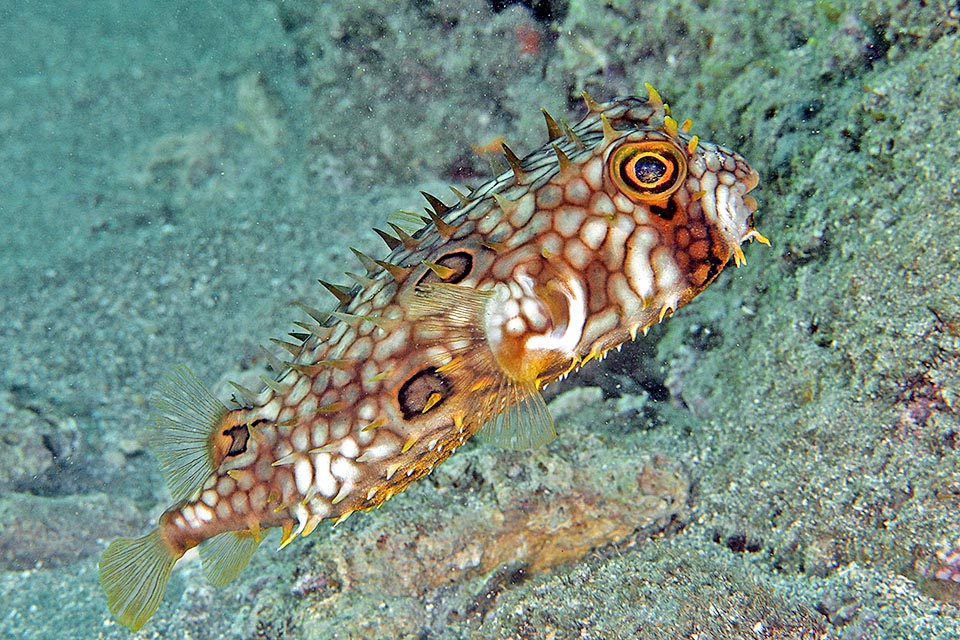 The scientific name Antillarum, recalls this range, whilst the generic epithet chilomycterus highlights the unusual profile of the upper lip, similar to a nose © Kevin Bryant

It frequents the zones rich in mollusks and crustaceans that are its main dish and rests, hidden, during the day, protected by its elegant mimetic livery.

Chilomycterus antillarum is 15-30 cm long, less than one third of the most known Diodon hystrix, its close relative, but here the spines are less numerous and do not bend over the body. They are short, with triangular base, and present always erect, regularly spaced with each other. There is a dozen of them along the longest side, between the head and the small dorsal fin, placed with 13 soft rays in a quite backward position. 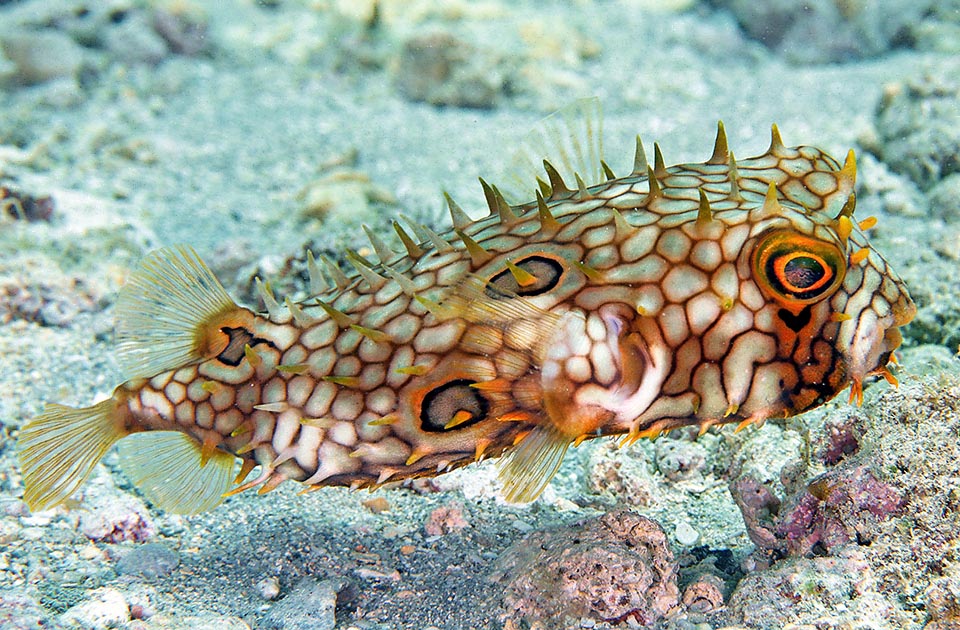 It doesn’t exceed 30 cm of length and the spines, foldable in the genus Diodon, here kept always erect, with triangular base, regularly spaced apart © Kevin Bryant

Over the eyes there are then two pairs of longer spines that grow as antennae over time. The body is tubular oblong, clavate towards the head. The eyes, surrounded by an elegant golden ring, are big and protruding to ensure a good night vision

The branchial operculum is a hardly visible fissure behind the pectoral fins. 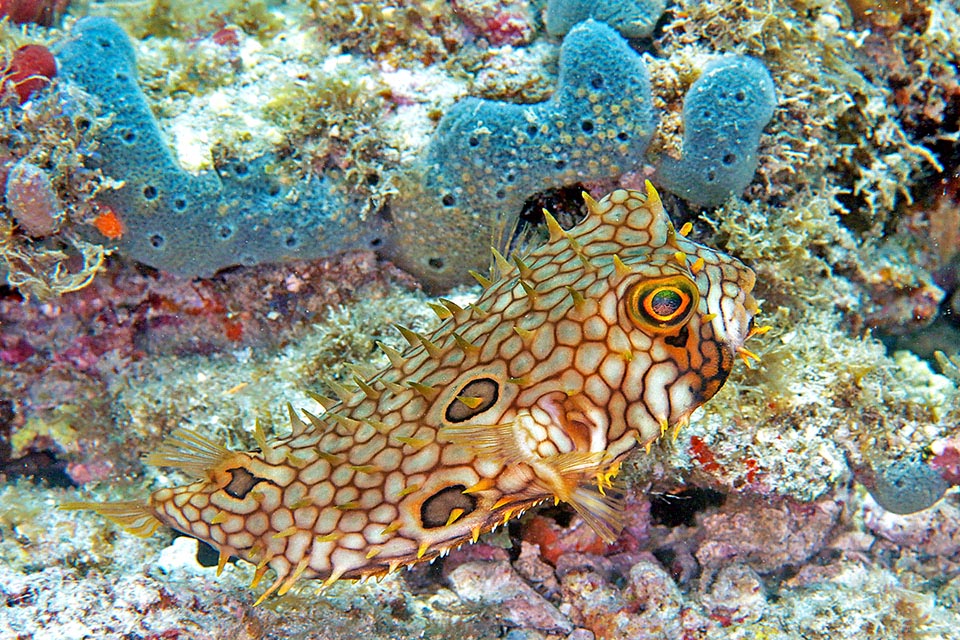 With these premises, it is evident that Chilomycterus antillarum is a very poor swimmer.

The spines are a good deterrent for the predators, also because, by swelling with water, this fish becomes two to three times bigger, transforming into a stinging ball difficult to catch and to swallow. And then, at worst, its liver, the gonads, the entrails and the skin are infused with tetrodotoxin, poison produced by symbiont bacteria, hundred times stronger than the cyanide, that blocks the breathing of the one who eats it.

So, if they are lucky enough to get away, the big predators in future will avoid attacking this odd species, that has, not by chance, an unmistakable look. 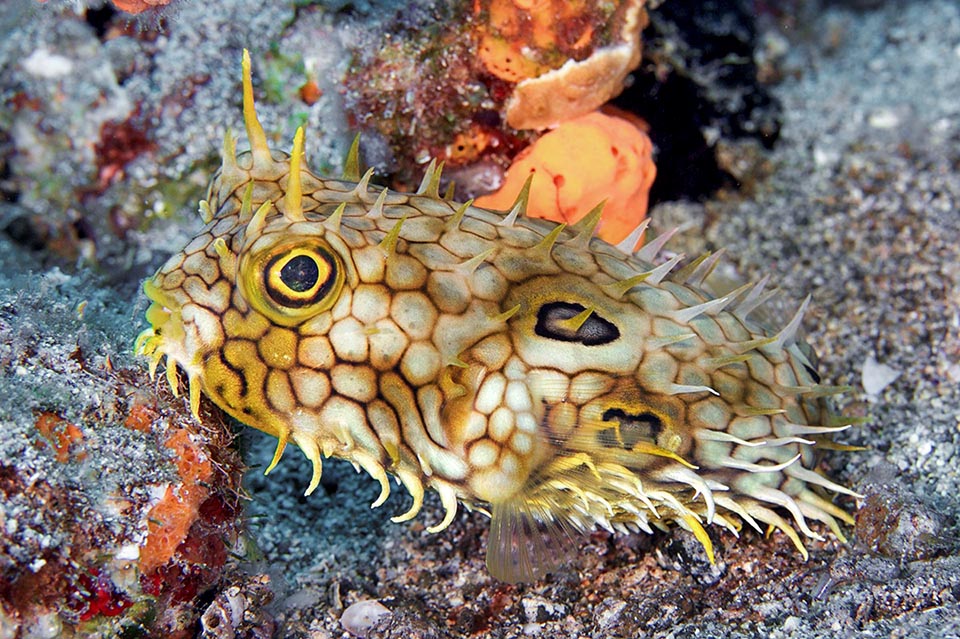 The skin is covered by unusual pale cream polygons, delimited by a dark reddish border. Moreover, there are 5 (rarely 7) showy and characteristic black spots: 2 over the pectorals, 2 on the sides and 1 at the base of the first dorsal fin.

Chilomycterus antillarum is a very cautious and little common fish, difficult to observe.

It mainly nourishes of benthic invertebrates: crustaceans and gastropod or bivalve molluscs that uncovers blowing strong jets of water on the sand. 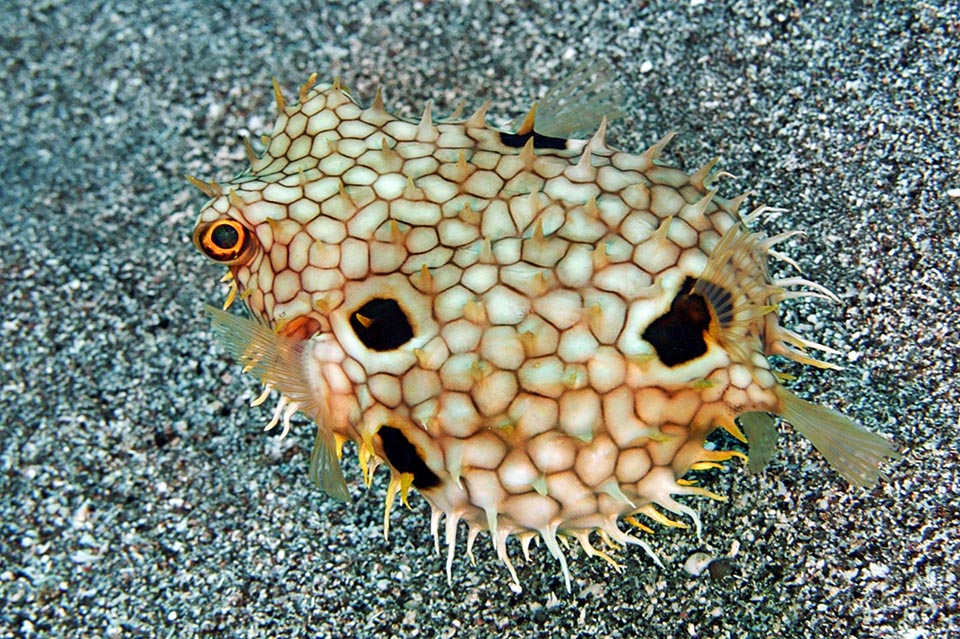 In case of danger it swells of water getting 2-3 times bigger: a stinging ball difficult to seize and to swallow. And at worst its death will not be useless for the species, because the liver, the gonads, the entrails and the skin are infused of tetrodotoxin, poison hundred times more powerful than the cyanide that blocks predators’ breathing © Allison & Carlos Estape

The solid beak then breaks any type of carapace, and the ill-fated small fishes that fall within range of its large mouth are also part of the feast.

The fecundation occurs offshore. Eggs and larvae, pelagic, carried by the currents, go sailing for weeks colonizing other places. The livery of the young individuals is black, with orange spines and clear fins.

The resilience of the species is good. The vulnerability index, very low, marks only 16 on a scale of 100.

Chilomycterus antillarum was last modified: May 3rd, 2022 by Peppino