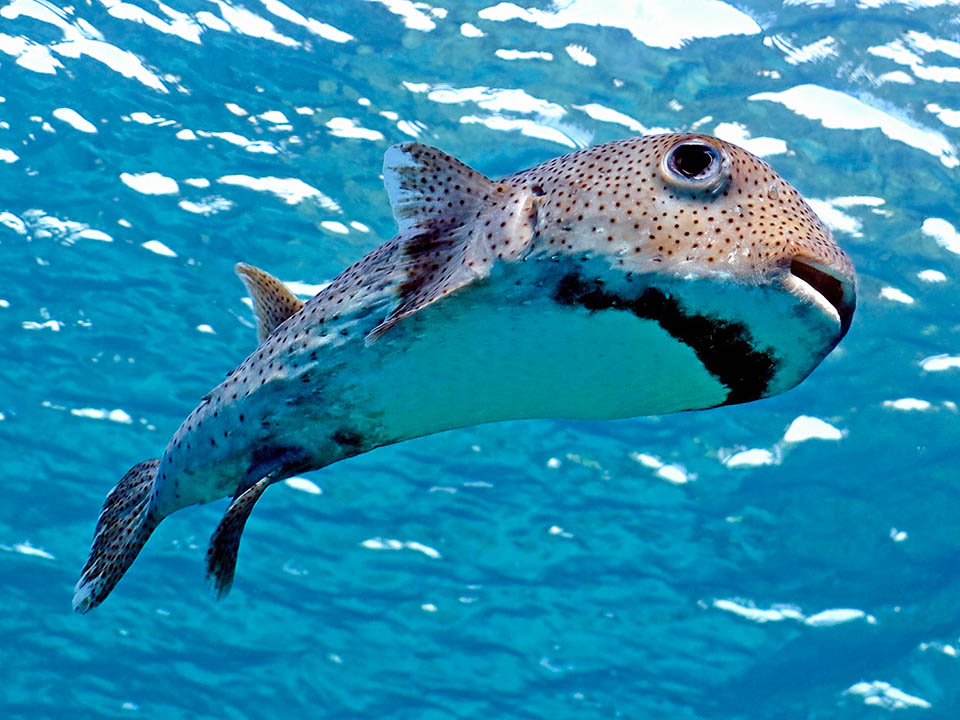 Porcupinefish (Diodon hystrix) is present in the tropical and temperate waters of all seas. Typical the white abdomen with black ring-shaped band on the chinstrap © Michael Eisenbart

The Porcupinefish  (Diodon hystrix Linnaeus, 1758) belongs to the class of the  Actinopterygii, the ray-finned fishes, to the order of the  Tetraodontiformes, mostly characterized by scales transformed in spines or in protective plates, and to the family of the  Diodontidae, counting 7 genera and 18 species.

They are called Balloon fishes, together the analogous similar Tetraodontidae, rich of 28 genera and 202 species, with thinner spines and visible only when the animal swells. In the latter we also note 4 incisors, whilst in the Diodontidae they are completely fused, without central division, in only one tooth per jaw and form a solid beak. 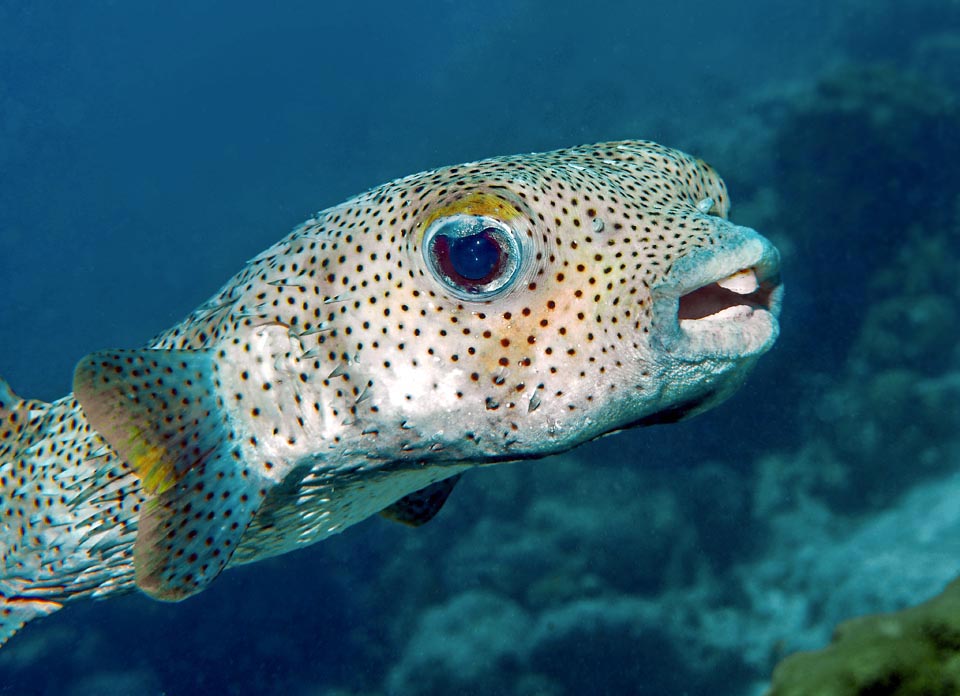 As its scientific name states, it has only two teeth that form a solid teeth © Pauline Walsh Jacobson

As a matter of fact, the name of the genus Diodon comes from the Greek “δίς” (dis) = two and “ὀδοντο” (odonto) = tooth, that is, with the teeth, whilst the specific hystrix, porcupine in Latin, is a clear allusion to the showy erectile spines on the body.

Diodon hystrix is a pantropical species swimming also on warm temperate waters. It is common in the Red Sea, but its presence in the Mediterranean Sea is still to be confirmed. 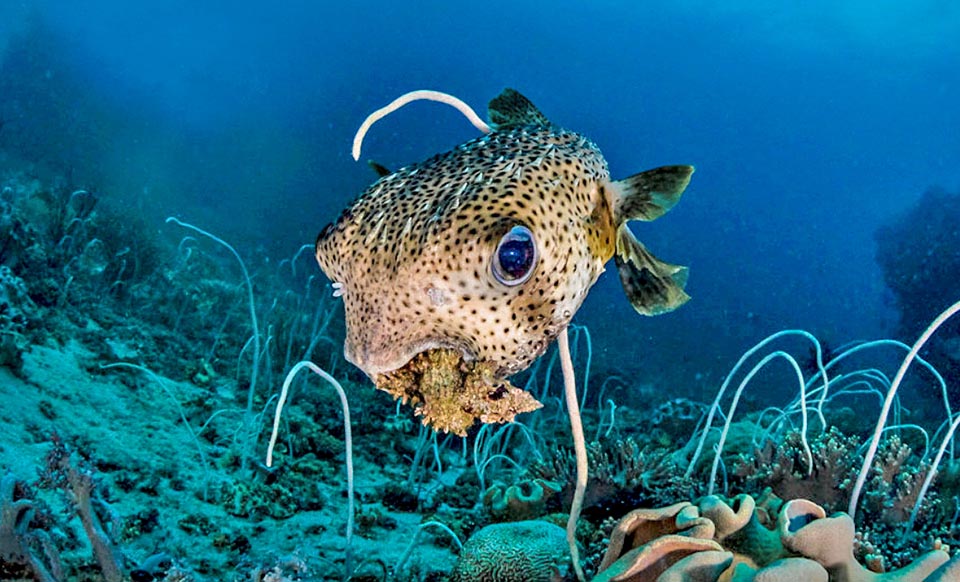 Here at work, by night, while attacking a gastropod. Besides molluscs, it eats crustaceans, sea urchins and madreporic polyps. © Magnus Johansson

The Porcupinefish does not have a precise habitat. It can be found anywhere between 2 and 50 m of depth, but rarely goes down under 30 m. It is a nocturnal animal frequenting zones rich of molluscs and of clefts, among the rocks and corals, where to hide and spend undisturbed the hours of the day.

Bigger than the analogous Diodon holocanthus and Diodon liturosus, it may reach 91 cm, even if, usually, measures 40-65 cm. 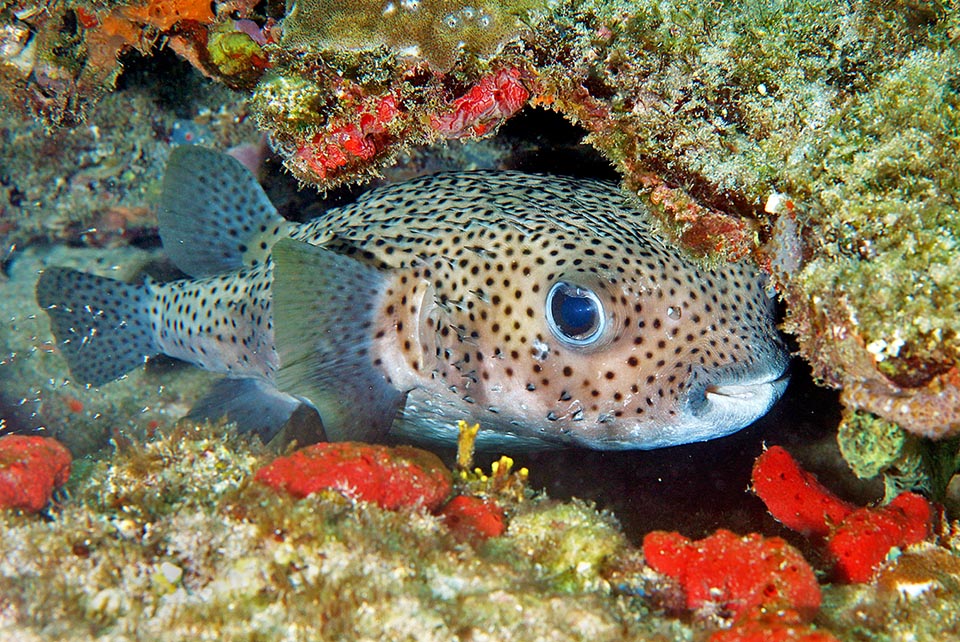 Adults spend day hours hidden in the clefts. To note the camouflaging livery and the big protruding eyes that ensure, even in the dark, a perfect vision © Kevin Bryant

There are no pelvic fins and the scales have turned into spines. The larger ones that stand up on the head, 16 to 20, between the snout and the dorsal fin, are a good deterrent for the predators, especially since swelling with water, the fish becomes a big spiny ball difficult to catch and to swallow. 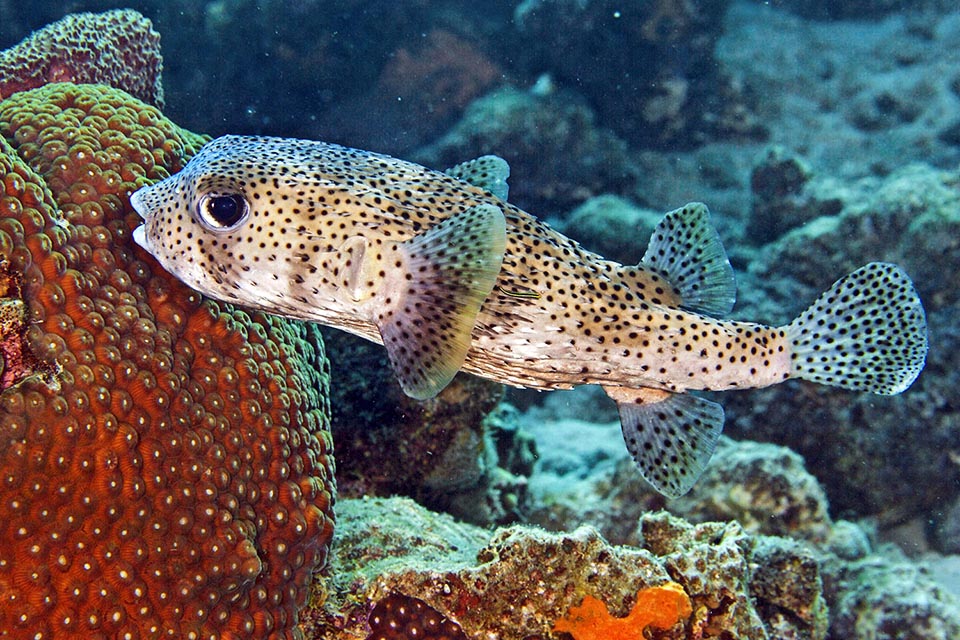 It has a leathery skin. The big mouth with the fleshy lips is surmounted by two pedunculate nostrils. The gill operculum is very small, hidden behind the pectoral fins.

Back, sides and fins are pale brown as a whole with draker camouflaged zones and several black speckles. The abdomen, also spiny, is white, with a showy black ring and band on the chinstrap. In this way, seen from below, the fish blends in with the bright rippled surface of the sea, evading the gaze of the predators. At worst, it has in store an invisible weapon: the tetrodotoxin, certainly useful for the survival of the species. 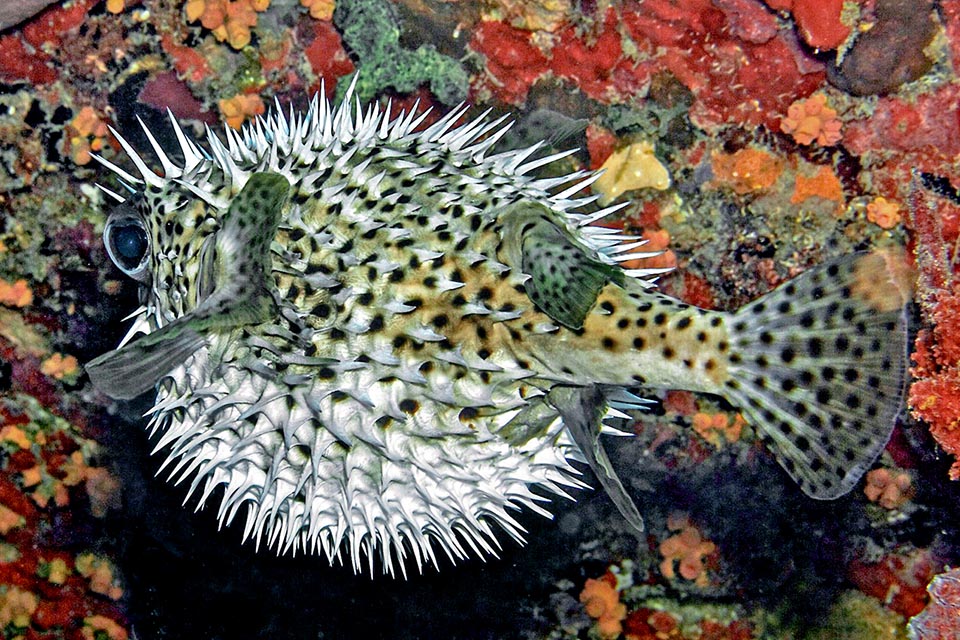 Menaced, swells of water raising the spines. The defense of the species is also entrusted to a strong poison, the tetrodotoxin, that blocks the predators’ breathing © Allison & Carlos Estape

This is a poison hundred times stronger than the cyanide, produced by symbiotic bacteria, that mainly accumulates in the liver and in the gonads, as well as on the skin and in the bowels.

It stops breathing. This is well known by the marauders who dare to attack it: the sharks, the Mahi-mahi (Coryphaena hippurus) and the Wahoo (Acanthocybium solandri) who are its natural enemies, not to mention, in Japan, the skilled surgeon cooks who prepare the fugu, a typical dish with 20 to 100 deaths a year, that has as ingredient the meat of the puffers. There are no antidotes and the only remedy is to make the ill-fated vomit, if he still has some food in the stomach and a mechanical ventilation in the hospital. 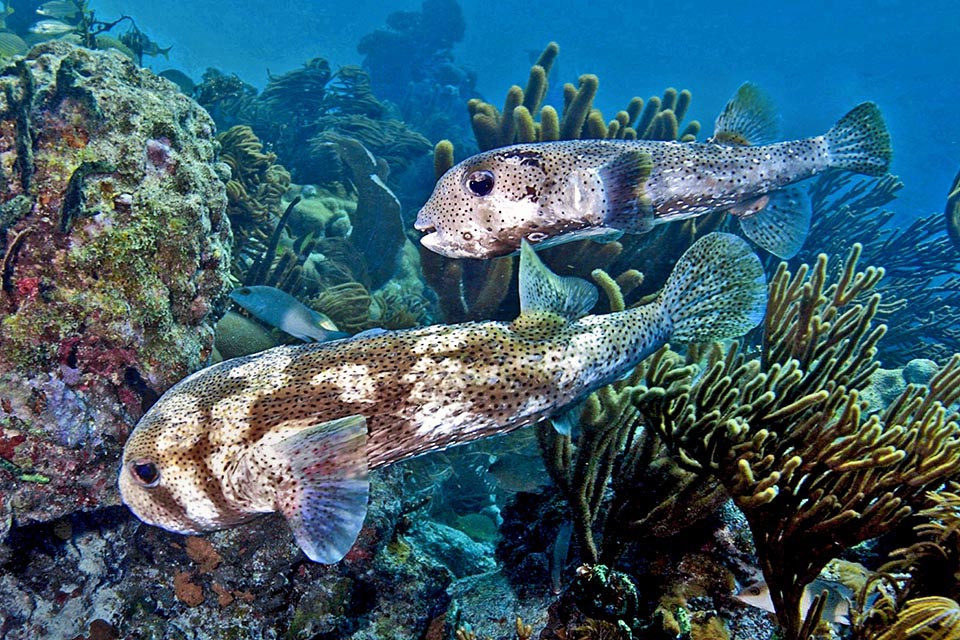 During the reproductive time, couples form, more or stable over time. It seems that the males are smaller © Allison & Carlos Estape

Diodon hystrix nourishes of benthic invertebrates: crustaceans, gastropod and bivalve molluscs, sea-urchins and madreporic polyps. The strong beak shatters ant armour and then the fish can happily suck in its meal. It is a lonely animal who is not afraid of divers, even if they stress it without any restraint, causing it to inflate several times to realize memorable photos.

During the reproductive period, couples do take form, more or less stable over time. It seems that the males are smaller. The fecundation occurs in open sea and the eggs are entrusted to the currents. 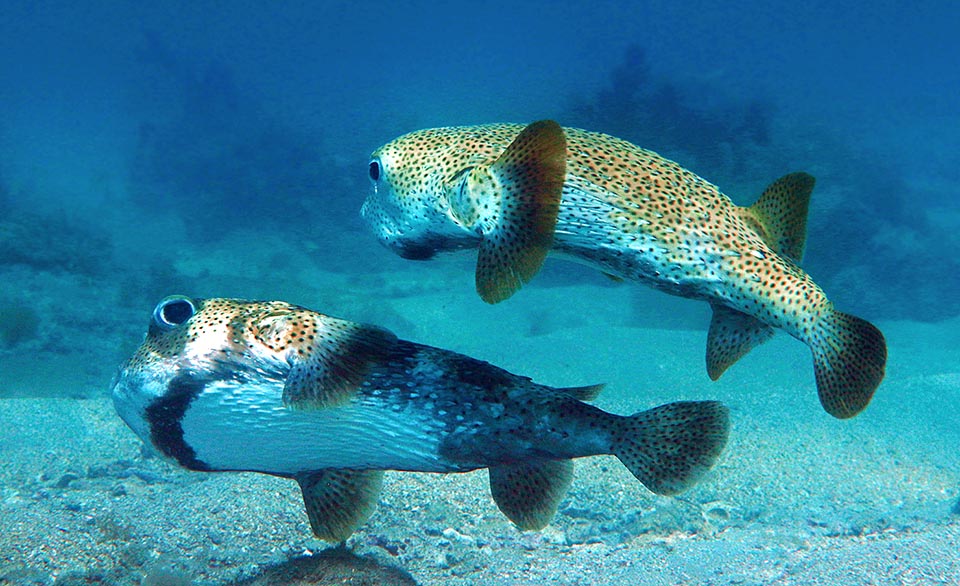 The 2 mm eggs are entrusted to currents. They hatch after 5 days in distant waters and also the larvae are planktonic. So, a little at a time, has colonized the whole world © Kevin Bryant

Small 2 mm spheres with large resources of yolk, hatch after 5 days of navigation in distant waters. The larvae are equally planktonic. They often grow in the shelter of floating algae, such as the sargassoes, and it is thanks to this pelagic reproduction that a little at a time this species has colonized the whole world.

When they reach the 20 cm of length, the young approach the coasts becoming benthic.

By sure, this is not a species good for the home aquaria as, size apart, the Porcupinefish eats and pollutes very much. It can be hosted in the large pools of the public aquaria, with a ten year life record and 69 cm of length. 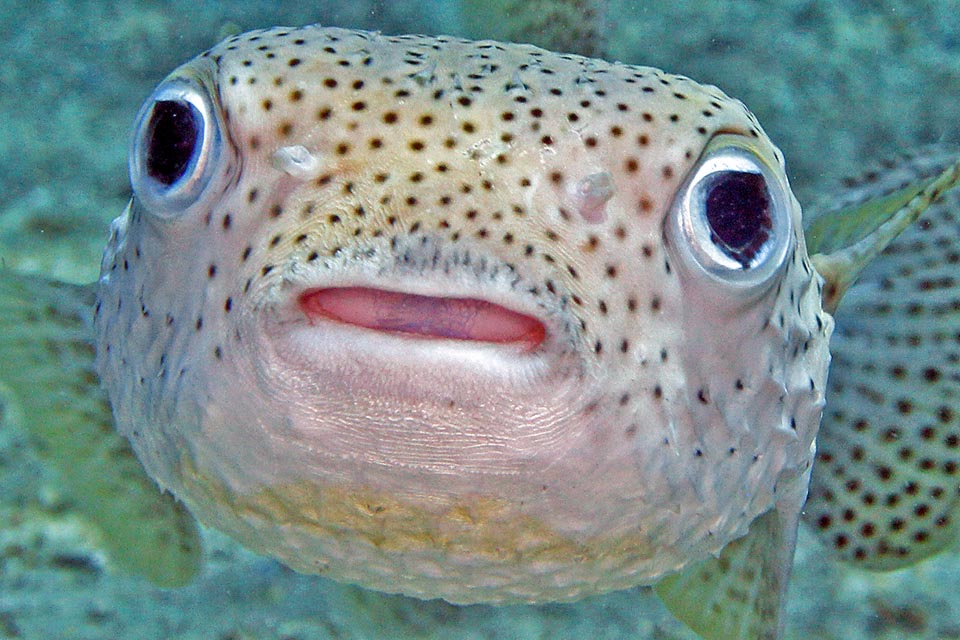 Young grow sheltered by floating algae, like the sargassoes. Only when 20 cm long they become benthic © Kevin Bryant

The resilience of this species is low, as the minimum time for doubling the populations is of 4,5-14 years, but seeing its dramatic diffusion it is not an endangered animal (2021), even if the vulnerability index is already moderately high, marking 48 on a scale of 100.