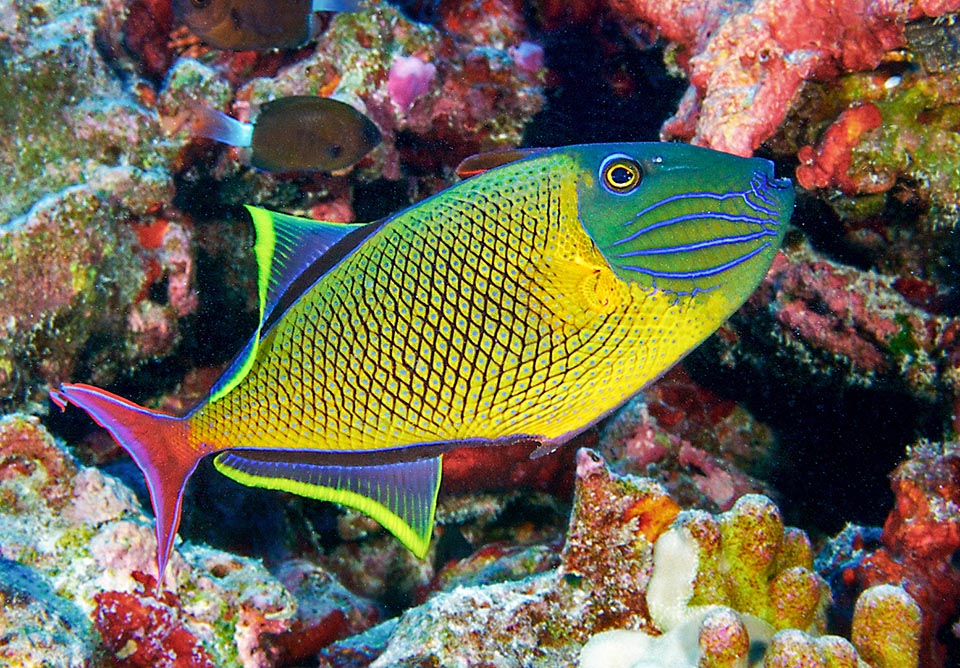 Xanthichthys mento is a western Pacific varicoloured Balistid. Even 30 cm long, it lives along the walls of the reefs between 6 and 130 m of depth © Keoki Stender

Xanthichthys mento (Jordan & Gilbert 1882), known as Redtail triggerfish or Crosshatch triggerfish, belongs to the class of the Actinopterygii, the ray-finned fishes, to the order of the Tetraodontiformes, and to the family of the Balistidae counting 12 genera and 43 species.

Known as triggerfishes, these fishes are often present in the public aquaria because of their fanciful liveries. Species like the Balistoides conspicillum, the Balistes vetula or the Odonus niger, rendered common by their anatomical peculiarity of the first dorsal fin, the so-called “trigger”, formed by three defensive spiny rays, foldable when resting, in a special lodge.

The first ray, long and robust, can be firmly locked, vertically, fitting into a notch of the second, and only with the voluntary movement of the third ray can be folded over the back. In this way, even if the fish dies swallowed by a predator, the stiletto will remain for a long time armed in its stomach, causing painful ulcers difficult to forget. 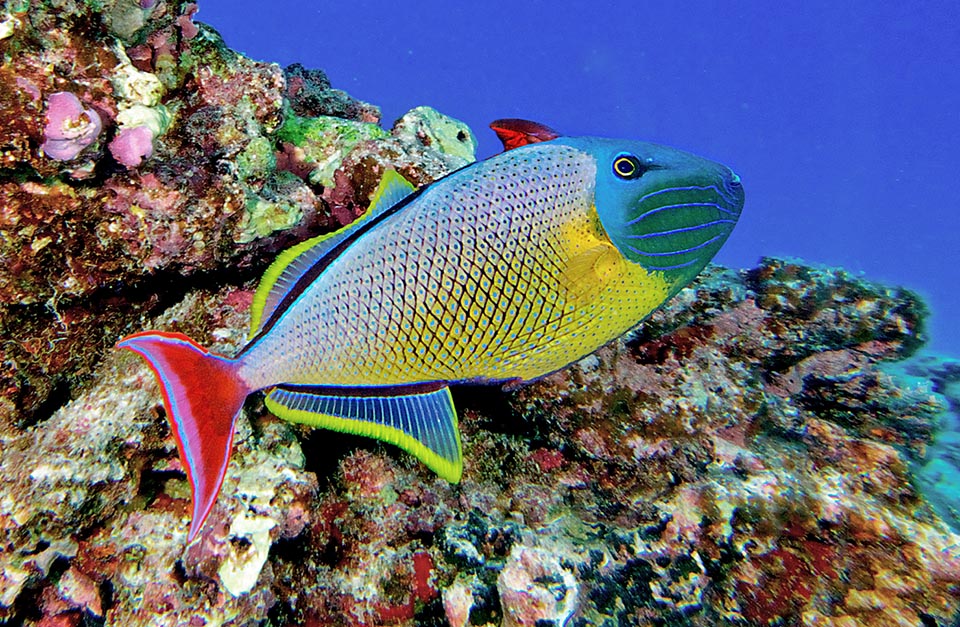 The first dorsal fin, here well visible in red, is the “trigger” typical to the family, blockable vertically as defense weapon © Keoki Stender

Moreover, this mechanism serves to the Balistids for sleeping peacefully in the den, as it is sufficient to find one with a particularly low entrance where the entry is possible only with lowered trigger, and then, arming it while sleeping, they are sure of not being dragged out by the currents.

Excepting the Balistes capriscus of Mediterranean and adjacent Atlantic, that, encouraged by the Gulf Stream has reached the British coasts, where the temperatures are the lowest ones tolerated by this family, all Balistid are tropical fishes as well as in the Atlantic, in the Indian Ocean and in the Pacific.

The name of the genus Xanthichthys comes from the Greek “ξανθός” (xanthos), that means deep yellow but also red, and from “ἰχθύς” (ichthys), fish, colours well present in this species, whilst the genus mento reminds us, from the Latin “mentus”, that the chin is very long and protrudes, unusually, beyond the mouth. 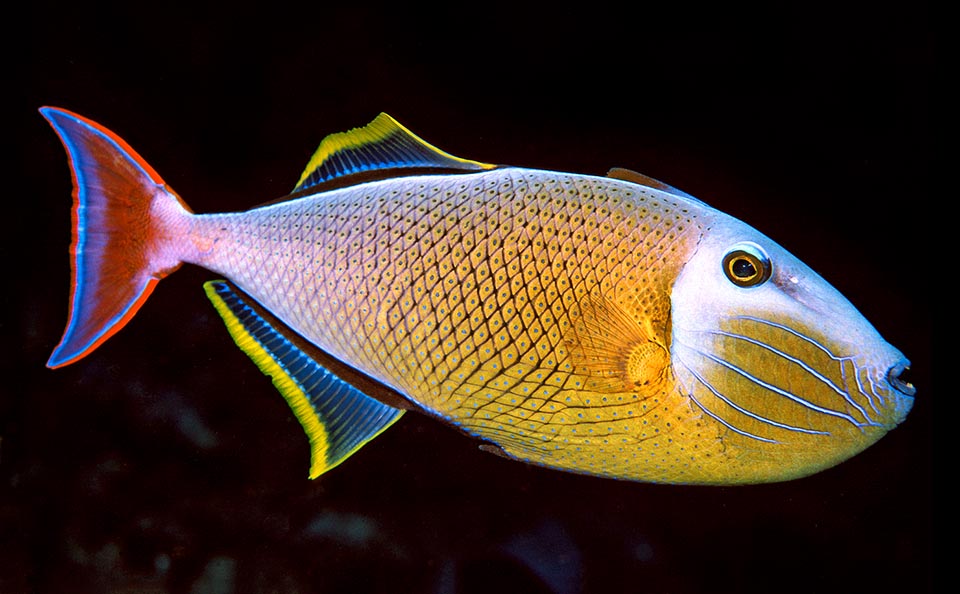 Xanthichthys mento lives in western Pacific. Indicatively, moving eastwards, we find it from southern Japan and the Ryukyus Islands to the Ogasawara Islands, in Wake Atoll, then in the Fiji Islands, the Hawaii, Cook Island, French Polynesia, Pitcairn Islands, Easter Island and Chile, whilst, further north, it reaches the Galapagos, the Cocos Islands, Colombia, Mexico and California.

Xanthichthys mento is a benthopelagic species that swims in schools in the madreporic formations between the 6 and the 130 m of depth, where the currents carry rivers of zooplankton.

It does not exceed the length of 30 cm. The body is flat, rhomboidal, protected, like all triggerfishes, by a coating of bony scales. 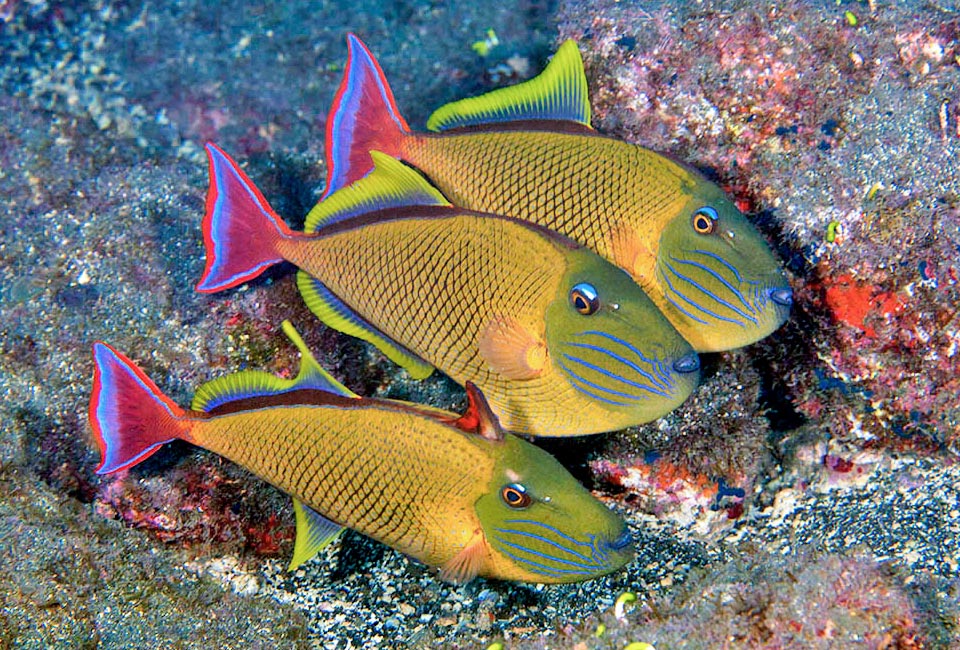 The enormous head occupies almost 1/5 of the body length. The eyes, placed on top, can move, like the chameleons, independently. The mouth is small, with thin lips. Besides, 6 pharyngeal teeth having a grinding function, are present the 4 incisors typical to the Tetraodontiformes, even if then, here, they have not to break madrepores and shells as the other Balistids, because the Redtail triggerfish eats only zooplankton, hydroids and jellyfishes.

The pectoral fins have 13-15 rays, whilst the pelvic ones have merged in one sturdy protrusion that these fishes open out downward to appear larger at the eyes of the intruders and for anchoring, together with the trigger, in the madreporic clefts, thus offering to the predators, who would like to take them out, only a discouraging coriaceous and spiny skin. 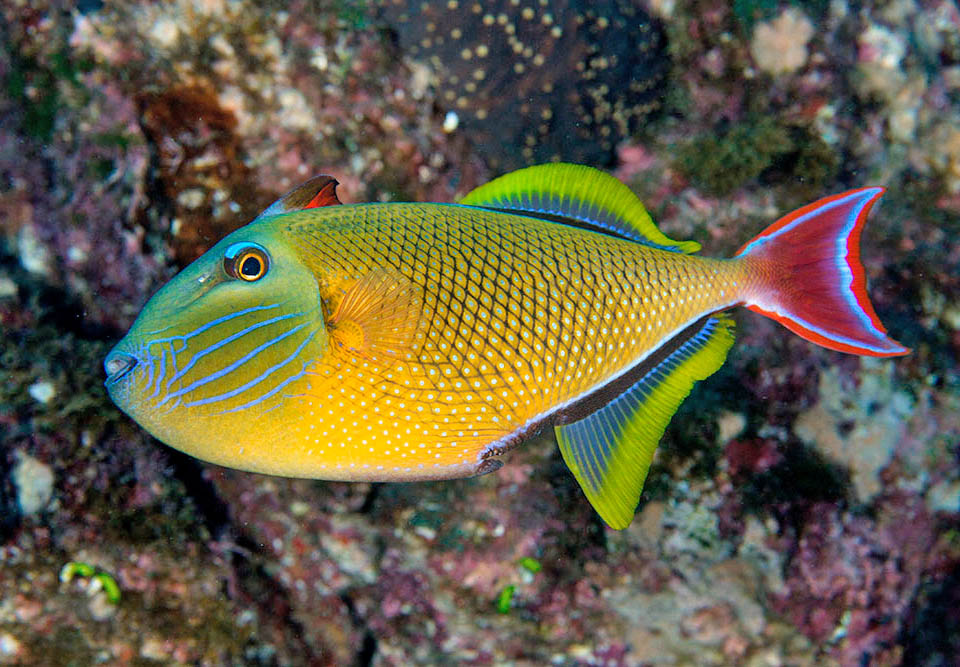 The males, territorial in the reproductive time, protect with the female the nest dug for the reproduction in the sand with strong water jets from the mouth © Paddy Ryan

In the males the colour of the body is yellow or orange, fading to olive green towards the back. The borders of the scales, dark, draw there a refined diamond-shaped cross hatching with a small turquoise dot in the centre. The head, darker and tending to the greenish blue, presents elegant longitudinal turquoise lines. 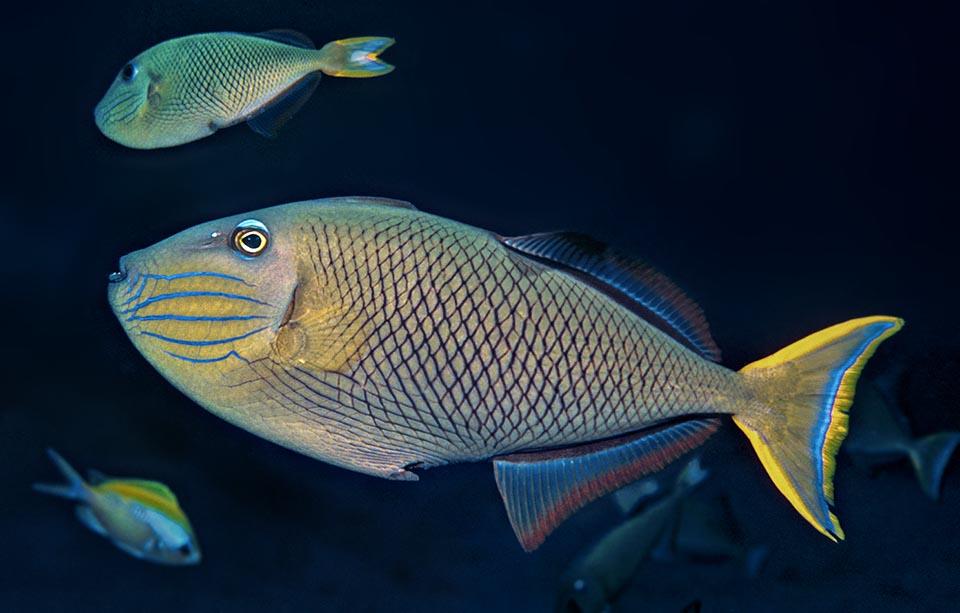 Females are recognized at once because the caudal fin is not red and has a bright yellow border. Here we note ventrally the remains of the pelvic fins evolutively merged in one solid bulge. Erecting it downward, the fish looks bigger to the eyes of the predators, and serves furthermore with the “trigger” to anchor in the clefts © Keoki Stender

During the reproductive period, the males control a small territory where, as usual in the triggerfishes, is dug, with jets of water from the mouth, a small nest in the sand where to lay and fecundate the eggs. Both parents keep the watch driving away the intruders, but only the female takes care of the eggs, ventilating and cleaning them, if necessary, until they hatch. 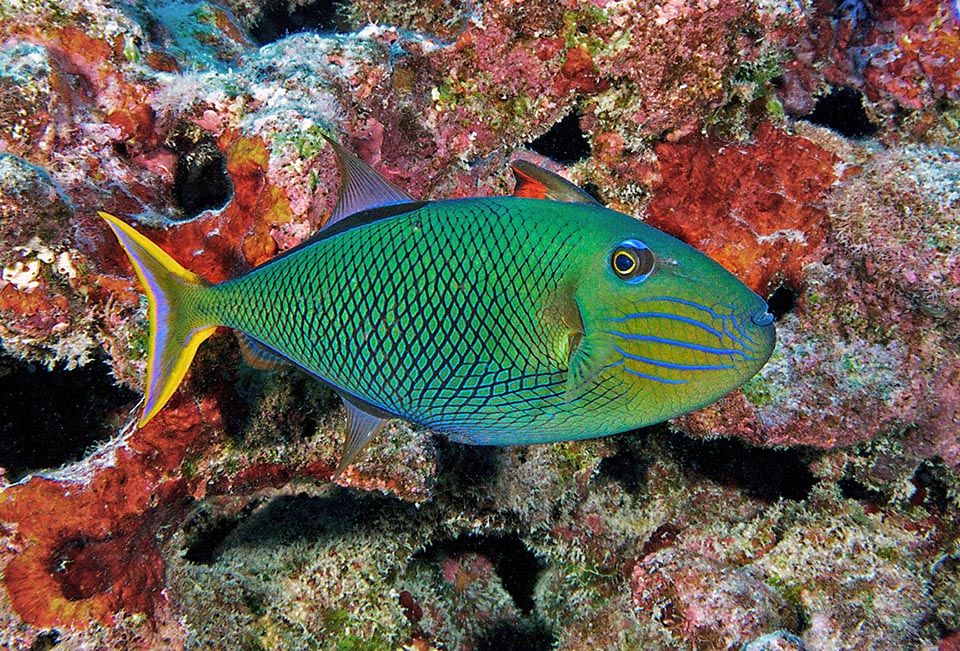 Another female on a greenish background. The reticulum with turquoise traits on the head remains, and the only red note is the “trigger” warning memo © Keoki Stender

Although required by the wealthy aquarists, keen to pay even 1.000 Euros just to have them at home, Xanthichthys mento is not a fish threatened by the sad market of the reef fishes. First, it is not easily seized when going down to deep waters amidst strong currents, and then, it can live only in large pools with suitable feeding. It usually begins with larvae of Artemia salina and frozen krill, but even if we succeed in getting it accustomed to equivalent foods, it is a fish that eats and pollutes very much, and the water of the pool must be renewed periodically.

It is not fished for food purposes, and also considering its vast diffusion, it is not nowadays a species under risk. The resilience (2021) is good with a possible doubling of the population in less than 15 months, and the vulnerability index, moderately low, is of 31 on a scale of 100.