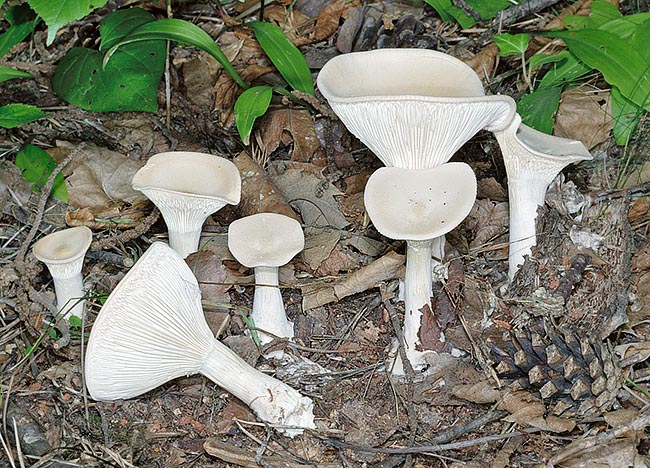 The term “gibba” comes from the Latin “gibbus” , meaning “hump, protuberance”, due to the umbonate shape the cap has when young.

It is a much common species and, in some places, is collected and also appreciated, but not everywhere.

The result is that few are the comon names : in Italy is called “ imbutino” ; in France is known as “Clitocybe en entonnoir” ; in Spain as “Seta en embudo” , in Germany as “Ockerbrauner Trichterling” , and in USA as “ Common funnel cap” .

Please refer to the text on the Clitocybe nebularis.

To the subgenus Clitocybe belong fungi with the cap neatly funnel-shaped, with opaque surface, sub-velvety, at times scaly at the disk ; the colour is pale, whitish to brownish-red, rarely grey. The gills are neatly decurrent on the stem. Cylindroid stem, but sometimes also slightly enlarged a the base, fibrous, run by longitudinal fibrillae ; the colour varies from whitish to concolorous to the cap ; elastic flesh. Spores ellipsoidal to larmiform, pileipellis formed by tangled hyphae with parietal more or less zebra-like pigment.

To the section Clitocybe belong fungi with glabrous surface of the cap, or felted to more or less fibrillose-scaly, whitish flesh with cyanic odor. Larmiform spores and pigment of ther hyphae of the pileipellis always encrusting. 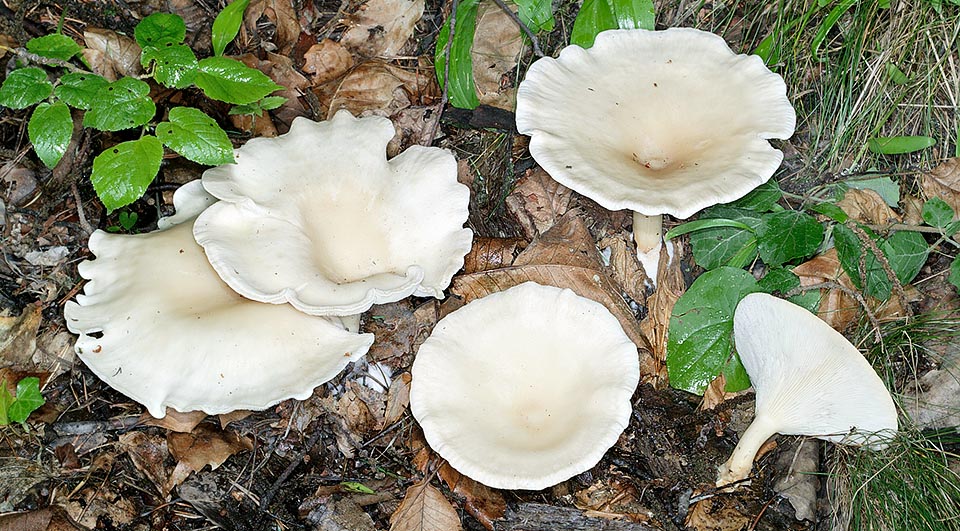 The 3-8 cm of diametre cap becomes later on more funnel-shaped. Only this is discreetly edible, as the stem, much fibtous, cannot be eaten © Giuseppe Mazza 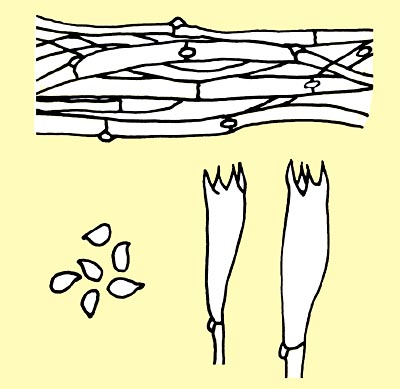 Habitat : it grows in groups even numerous on the litter of conifers as well as of broadleaf trees, in summer and autumn.

Edibility : discreet edible, appreciated in some zones ; only the cap is eaten being the stem somewhat fibrous.

Remarks : this is a very common species growing abundantly after the summer and autumn rains. Well recognizable due to its peculiar characters : the funnel-shaped cap, the yellowish ochraceous, brownish yellow colour, the whitish gills, decurrent, the stem sub-concolor to the cap or whitish and the typical cyanic odor.

However, there are other species in the genus Clitocybe sharing the colour as well as the morphology. Clitocybe alkaliviolascens Bellù, distinguishes for the ochraceous brown cap, the stem that is concolorous to the cap and especially the reaction to the violet of the flesh with the KOH; Clitocybe costata Kühner & Romagnesi, distinguishes for the margin of the cap typically ribbed, sinuate-lobate, the ocher-brownish, the stem concolorous to the cap with coarse longitudinal fibrillae; Clitocybe squamulosa (Persoon : E.M. Fries) P. Kummer, distinguishes for the cap with fine scales and more reddish colours; Clitocybe sinopica (E.M. Fries : E.M. Fries) P. Kummer, distinguishes for a more fleshy cap of fawnish ocher colour and farinaceous odour. It may be also mistaken with Lepista flaccida (Sowerby) Patouillard, which, however, has fawnish-orange cap, pink-orange, the margin always inrolled, the decurrent gills neatly detaching, without breakage, the flesh of the cap and the spores appearing finely warty.