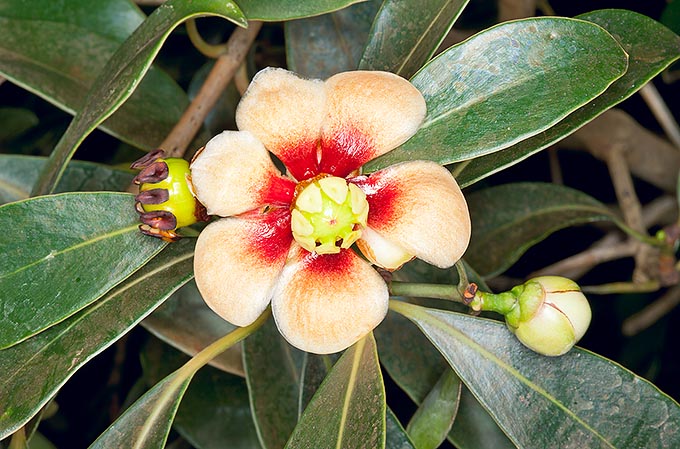 The species is native to southern Brazil (states of Rio de Janeiro and São Paulo), where it grows in the sandy coastal regions called “restinga”.

The genus is honoured to the French botanist Charles de l’Écluse (1526-1609), known with the Latinized name Carolus Clusius; the name of the species is the Latin adjective “lanceolatus, a, um” = lanceolate, with reference to the shape of the leaves.

The Clusia lanceolata Cambess. (1828) is a shrub or a small tree, evergreen and dioicus (each individual carries either only male flowers or only female ones), up to about 3 m tall, with greyish bark and opposite leaves lanceolate, thick, coriaceous, of glossy dark green colour, 7-12 cm long and 2-4 cm broad; from the wounds escapes a whitish latex which may be irritant for the skin and toxic if ingested.

Inflorescences in terminal corymbs, male and female flowers similar for shape and colour, calyx with 4 sepals and corolla having 6-8 obovate petals, waxy, 2-2,5 cm long, white in the upper half, dark red below, the male flowers have several close together stamina, the female ones a superior ovary with crown of almost sessile stigmata (with extremely short style). 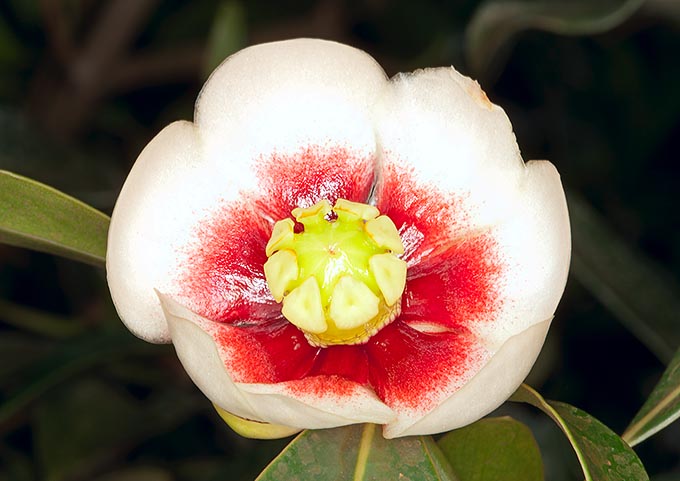 Sexes are separate, but male and female flowers are alike as shape and colour © Giuseppe Mazza

The fruits are globose capsules of about 4 cm of diameter, of reddish green colour and with the permanent traces of the stigmas, which open when ripe expelling the cylindrical seeds with orange red aril.

It reproduces by seed, which must be interred in the shortest possible time, having a limited duration of germination, in sandy soil kept humid at the temperature of 22-24 °C, by woody cutting and air layering.

Very ornamental species, for the foliage as well as for the flowering, and little demanding, but rare in cultivation, suitable only for tropical and subtropical climate zones in full sun, for an optimal growth, or in slight shade, on particularly draining soils, preferably sandy, as in the wild, acidic or neutral; well rooted plants have minimum requirements of irrigation.

It can be utilized as isolated specimen and with the appropriate prunings, which stands without problems, for creating fences and barriers; it resists well also to the salty winds, and therefore can be employed in gardens placed close to the sea.

It adapts well to the cultivation in pot, in sandy soil, rich of organic substance, for the decoration of luminous patios and terraces, with regular waterings in summer, reduced in winter.

→ To appreciate the biodiversity within the CLUSIACEAE family please click here.