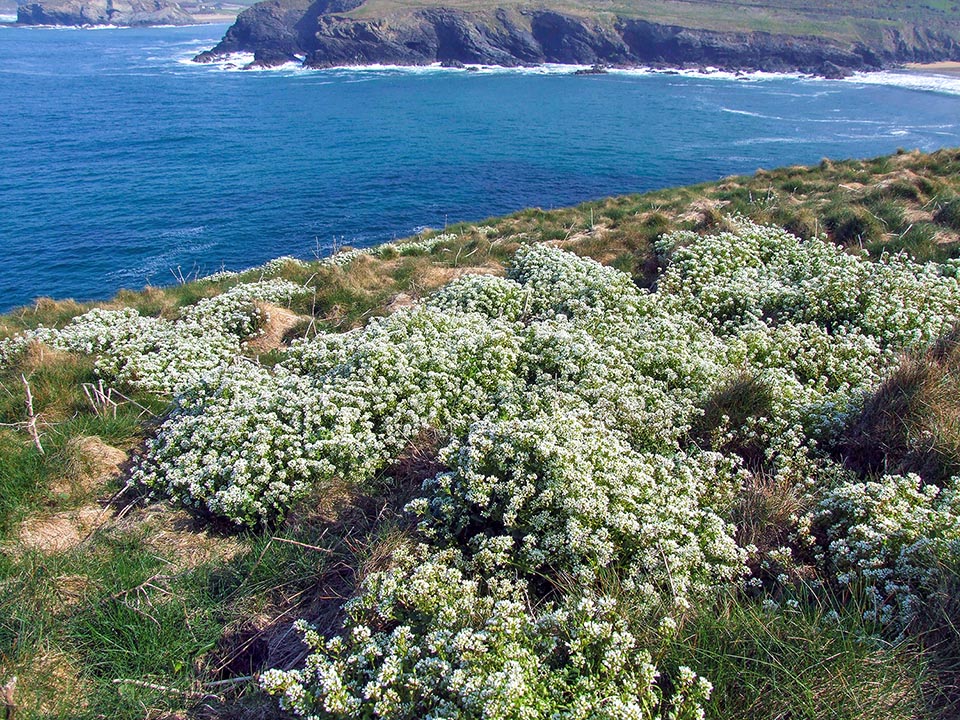 Cochlearia officinalis is a species native to North and West Europe, now naturalized in other parts of Europe and in southern Argentina © Philip Goddard

Cochlearia officinalis L. is an endemic plant of the family Brassicaceae, tribe Cochlearieae, native to northern and western Europe, now diffused and naturalized in other parts of Europe and in America (southern Argentina). In its origin sites it lives on the sea cliffs, in the cracks of the coastal walls, in the pebble beaches and in brackish marshes. In the hinterland it prefers the areas near salt mines, but can live, thanks to its versatility, on sandy and clayey grounds provided they are getting periodically wet. It tolerates very low temperatures.

Cochlearia officinalis, vulgarly called common scurvygrass, is a biennial or perennial herbaceous species with taproot roots, fibrous, able to anchor the plant to all substrata. The stem is erect, up to 50 cm tall, angular and ramified. The basal leaves, with their typical spoon shape, are entire, rather succulent and supported by long petioles. The cauline leaves are sessile, heart shaped at the base, amplexicaul, with coarse, sharp, teeth. 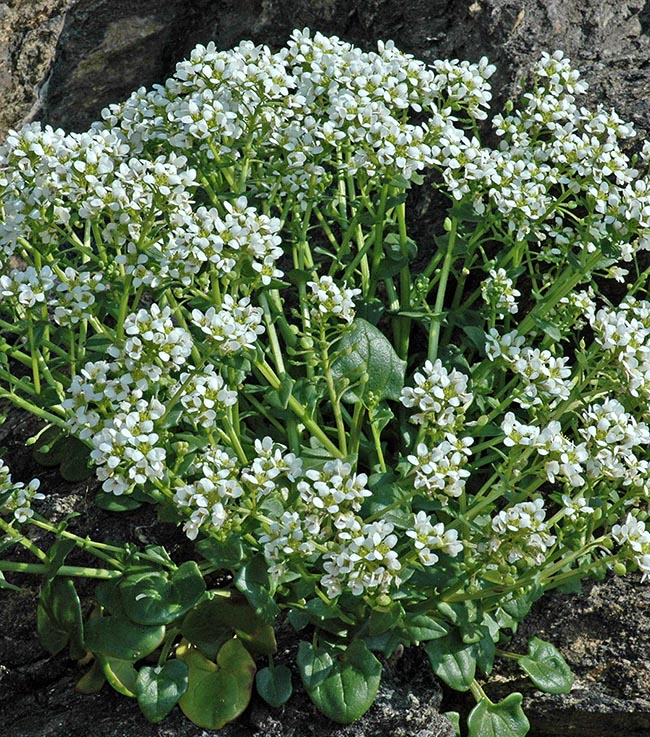 Up to 50 cm tall, with ramified angular stem and basal leaves shaped like a spoon, it grows on sea cliffs, in cracks of the coastal walls and in the beaches of gravel and brackish swamps, tolerating quite low temperatures © A.S. Kers

The flowers are very fragrant and grouped in terminal racemes, with a calyx of four green sepals and four 6 mm long petals, white, at times tinged of violet.

The blooming happens from April to June, at times lasts till August, followed by the formation of the fruits that are small dehiscent siliques, ovoid, 3-6 mm long, containing small 1,2-1,5 x 0,9-1,3 mm sub spherical seeds, brown or brown reddish without albumen.

Cochlearia officinalis is a polymorphic species, mainly of autotetraploid origin, with chromosome number 2n=24 capable of hybridizing with other similar species such as Cochlearia danica L. and Cochlearia anglica L.

Rich in vitamin C, or ascorbic acid, it was abundantly utilized in the XVI century for its antiscorbutic property. Pliny the Elder (23-79 AD) knew this plant for its medicinal properties but the first descriptions of scurvy are found in the Ebers Papyrus, a text written in Thebes in 1550 BC that, besides the symptoms, suggested the remedies with the use of fresh vegetables.

The first signs of the disease are weakness, tiredness, pain in arms and legs with decrease of the red blood cells that cause damages to the gums, loss of hairs and bleeding of the skin. Death is sure if a remedy is not applied.

This disease manifested itself during the long sea voyages of the seamen looking for new lands. The explorer Vasco da Gama (1469-1524) lost two thirds of his crew members while going to India in 1499 and Magellan (1480-1521) lost more than 80% of them while crossing the Pacific Ocean in 1520. Later on, thanks to the use of this plant, the seamen no longer suffer from this disease during the long voyages.

Cochlearia officinalis is also used as disinfectant due to the particular composition of its essential oil present, to a greater extent, in the roots. Laboratory studies have shown, in fact, that it is endowed of an inhibitory effect on the growth of several bacteria (Serratia marcescens, Bacillus subtilis, Escherichia coli, Mycobacterium phlei and Mycobacterium tuberculosis).

The plant also has digestive, tonic, diuretic and eupeptic properties. Yore, it was als utilized for treating the paralyses and the rheumatisms.

On the market there are several products that employ this plant, such as disinfectant gels, cosmetics products, lotions to favour hair growth, anti free radical “scavanger” creams. 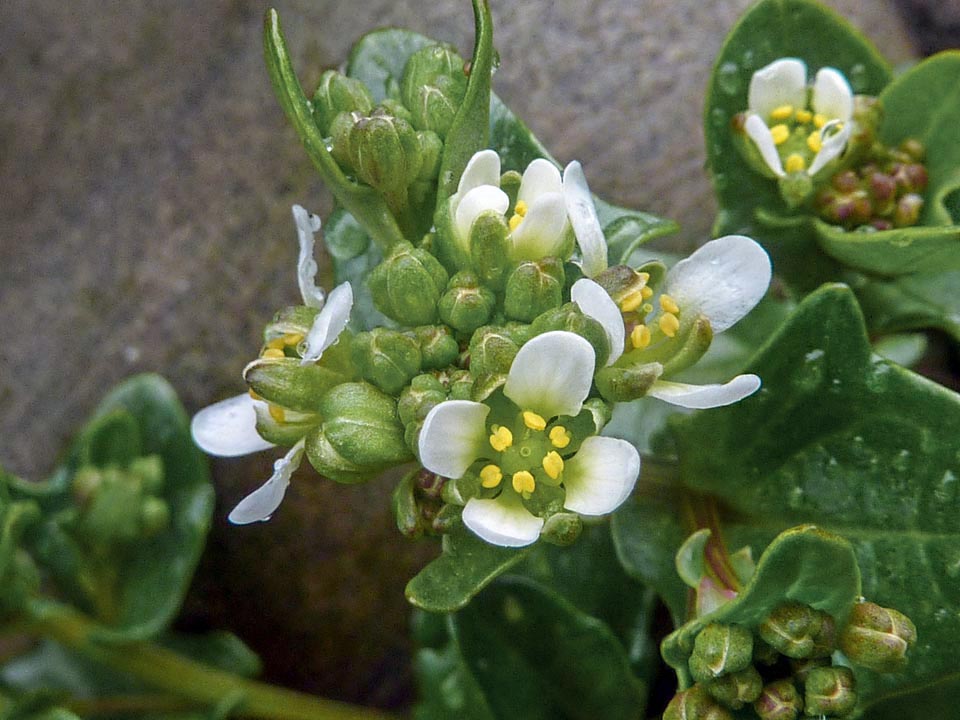 Edible and rich in vitamin C, it was used in the XVI century for its antiscorbutic property that allows long sea voyages. The essential oil, present especially in the roots, has, moreover, disinfectant properties, digestive, tonic, diuretic and eupeptic. The very fragrant flowers, bloom mainly between April and June © Gus Routledge

The squeezed fleshy leaves can furnish a good craft beer.