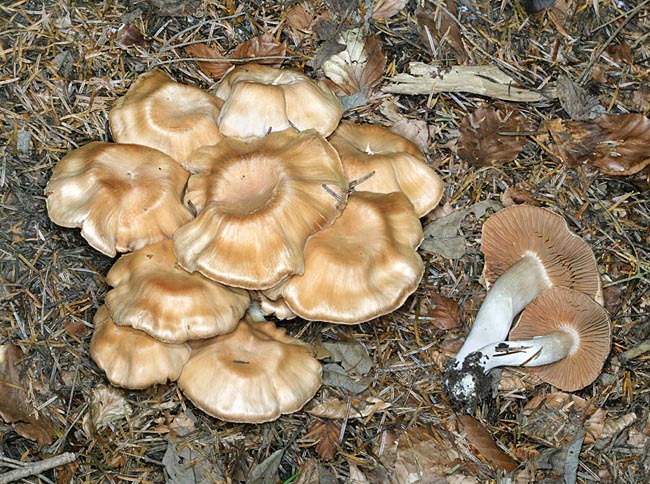 The etymology of the name comes from the Latin “infractus” = broken. Of this species, as well as of most inedible ones, the local names in Italian are not known. On the contrary, in German it is called “Bitterer Schleimkopf”, in English “Sooty-olive Cortinarius” or “Bitter Webcap” and in French “Cortinaire à marge brisée”.

Description of Genus, Subgenus and Section

Al genere Cortinarius are ascribed small carpophores with very thin flesh and medium to big ones which, then, are fleshy and homogenous. The cap varies from campanulate to umbonate in the smallest species and to convex in the bigger ones; the surface can be dry, slimy or glutinous, at times it may present some araneous-sericious plaques as remains of the general veil. The gills are adnate or emarginated-adnate on the stem; initially they are whitish, beige, yellow, olivaster, brown or violaceous, finally, all become brown-rusty due to the ripening of the spores. The stem always shows remains of the partial veil (cortina), and remains of the general veil under form of flake or of armilla, it can be dry or glutinous; cylindrical, obese, obclavate, with rooting base or bulbous, bulbous-marginated. The flesh can be white or coloured, sometimes with distinctive odours and tastes.

To the Subgenus Phlegmacium are ascribed species with carpophores presenting with more or less sticky cap when the weather is wet and dry stem, more or less cylindrical stem, obclavate, with widened to variously bulbous base; mild flesh, different macro-chemical reactions; elliptic-amygdaliform spores.

To the Section Scauri are ascribed species having carpophores whose cap and stem are often coloured violet, the gills colouring, at times, in dark violet when breaking or when being manipulated, various macro-chemical reactions to the KOH and to the Lugol’s reagent. 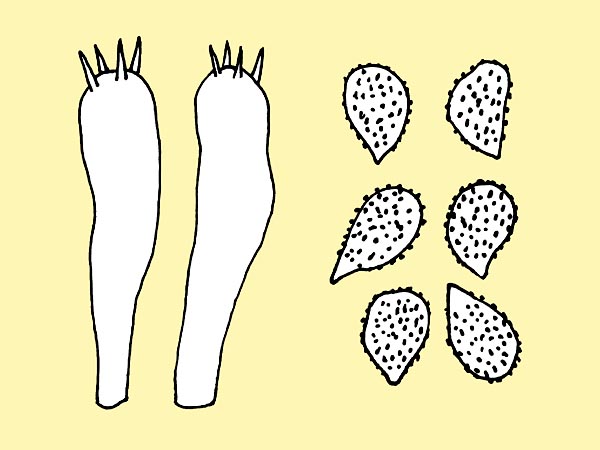 Hymenium: Crowded gills, narrow, adnate or emarginate-hooked, interspersed by rounded or attenuated lamellulae, of brown-olivaster colour, then brown-rusty, edge entire or finely grooved, initially pale then of the same colour as the lamellulae.

Flesh: Sturdy at the centre, exiguous at the margin, firm then soft, whitish, at times grey-violaceous at the apex of the stem, olivaster in the surface of the stem, almost absent odour, bitter taste.

Habitat: It grows by late summer and in autumn, in the broad-leaved woods as well as in the coniferous ones.

Remarks: It is a fairly frequent species in the broad-leaved and needle-leaved woods, on calcareous as well as siliceous soils. It’s a quite easily determinable species is we keep in mind the distinctive characters such as the dark brown colour of the cap with olivaster nuances, the grey-olivaceous gills, the upper part of the cap shaded in blue and the bitter taste of the flesh and of the cuticle. It may be mistaken with the Cortinarius infractus var. obscurocyaneus, which however has violet colourings on both flesh and gills; the Cortinarius infractus var. olivellus, having, conversely, greenish-grey colours almost everywhere. All of them, anyway, have the bitter taste of the flesh in common.